So, What Ever Happened to Virtual Reality?

In the amusement industry today, the most important thing that parks must do is attract new guests—that’s just what the industry is about. With the plethora of activities now available, it is getting increasingly difficult to increase park attendance. Sure, big national parks have no struggle adding huge rides and new lands to keep guests coming through the turnstiles. However, smaller parks, such as regional parks, can’t afford to open a groundbreaking attraction every single year. However, a recent trend is parks’ revamping of old attractions into something new. One way that this was attempted only lasted a relatively short amount of time, and that is virtual reality (VR). VR appears to be something that was gone before it really even began, but it may have had a bigger impact than it appears.

The trend began with Six Flags placing Virtual Reality on some of its most popular roller coasters, one being the classic Revolution — now the New Revolution at Six Flags Magic Mountain. The technology was also implemented on multiple rides in the chain in 2016 and 2017 such as Medusa Steel Coaster at Six Flags Mexico, Superman: The Ride at Six Flags New England and even multiple drop towers. For coasters, the VR goggles were given to riders as they boarded the coaster trains. The goggles would scan a code on the seat in front of them (or a small card for front row) and sync to the video that the riders would see. After the ride ended, riders would return the goggles to be sanitized and given to the next group. 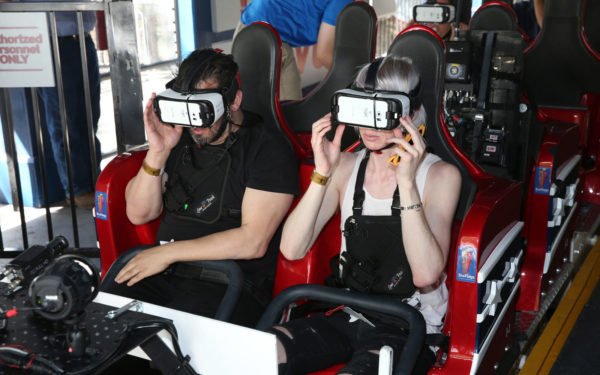 New Revolution was the first Six Flags coaster to receive VR headsets. We liked the VR experience, but the operations struggled.

In theory, the idea was great: rejuvenate older attractions and market groundbreaking technology at no extra cost to guests. When we reviewed New Revolution at media day, the VR worked great. However, when implemented for the public, it was problematic. The sanitizing and syncing process resulted in upwards of 10-minute load times for trains. The headsets were not high-end goggles like Oculus technology or the fantastic Void VR attractions (which are definitely worth a trip, by the way), they were Samsung Gear VR headsets. This meant that they were powered by Samsung smartphones inserted into the plastic goggles. That resulted in the phones often cracking, freezing, running out of battery or having difficulty syncing. 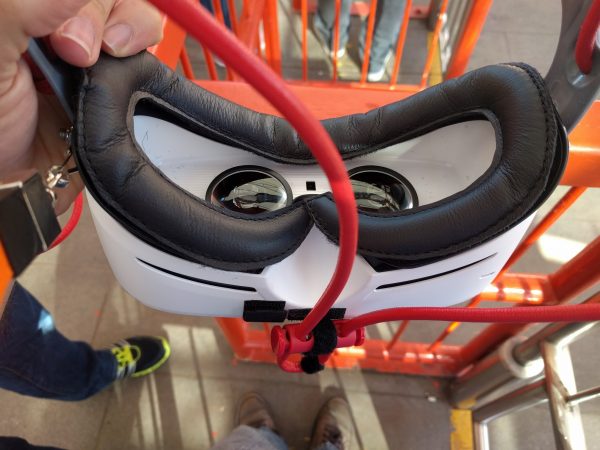 VR headsets used on the Six Flags coasters, this from Kong as Discovery Kingdom.

I was able to experience this technology on three attractions: Superman: The Ride at Six Flags New England, Steamin’ Demon at The Great Escape in 2016 and Mind Eraser at Six Flags New England in 2017. The first time that I heard that Superman: The Ride was receiving this treatment, I felt a mixture of excitement and confusion. This technology makes sense on rides like Steamin’ Demon, an Arrow Looper, or Mind Eraser, a Vekoma SLC. These rides are a little rough, past their prime and don’t draw in many crowds. Placing it on Superman: The Ride, a nationally lauded Intamin hyper that is undoubtedly the most popular ride in the park, seemed counter-intuitive. 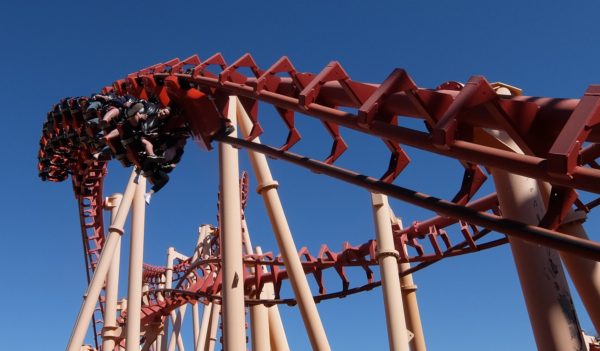 VR made more sense on rides like Kong, a Vekoma SLC at Discovery Kingdom, that were aging and less popular.

Superman garnered 2- or 3-hour lines almost daily during the summer, and the park would often close the line temporarily until the wait shortened. On my first ride on Superman with Virtual Reality, the screen was black the entire ride, so I essentially rode the ride with no VR and no sight, which was not an ideal experience. The next time I rode, the VR worked, and the experience was incredible. It was a truly unique ride that was unlike anything I have ever experienced at a theme park before. It featured a virtual inversion that made riders feel like they were upside down. It would be a welcome addition if it could be properly streamlined.

I don’t think the experience was as good on Steamin’ Demon and Mind Eraser, even though they included an interactive element. The theme of both rides’ VR experiences was an alien invasion. Wherever the rider turned their head, the device would “shoot” at alien crafts in the game. It was interesting but almost detracted too much from the ride due to the theme being so general and the shoehorned-in gaming aspect. 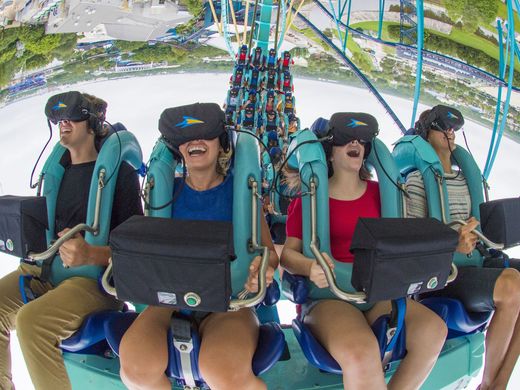 The Next Generation VR Attractions

So, was VR in amusement parks a complete failure? Not exactly. For all the places that it didn’t work, other parks took the components that did work and tried to adapt them to their advantage. Only a few parks still have VR attractions—most notably Freedom Flyer at Fun Spot America in Orlando and Battle for Eire at Busch Gardens Williamsburg. VR was also used on Kraken at SeaWorld Orlando but was removed in 2018. Each of these parks is doing something that the Six Flags parks (and Cedar Point very briefly) didn’t. Freedom Flyer is a family coaster, a slower moving suspended ride with a relatively simple layout. This allows riders to focus more on the VR experience as opposed to other rides with more intense elements that can detract from the VR. It is also an attraction that won’t suffer too severely from wait time issues, as it does not attract nearly as many guests as major parks. 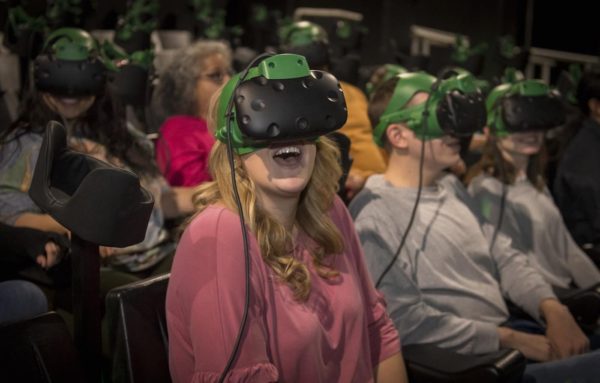 On Kraken at SeaWorld, the headsets were attached to the coaster trains, as were their syncing devices, so the ride was never out of sync. However, the loading and cleaning process was still a hassle, hence it being removed. It was a very noble effort and may have led to what I believe to be the most successful implementation of the technology, Battle for Eire (other C101 writers had similar takes on Battle for Eire). 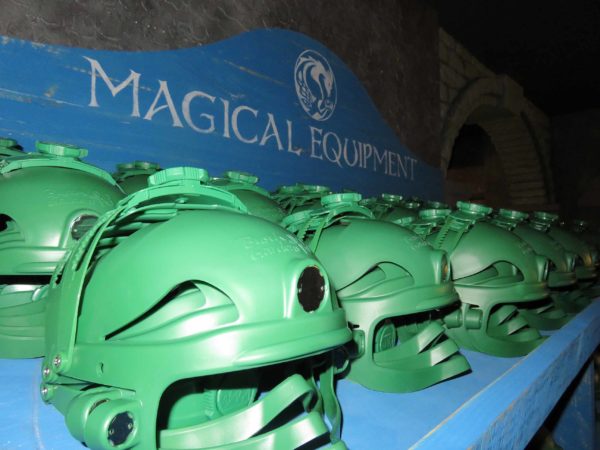 The Battle for Eire model of wired Virtual Reality headsets that clip into washable helmets seemed to solve the operations and VR resolution issues.

Unlike its other VR counterparts, Battle for Eire is a motion simulator ride, not a coaster, and seats riders on a moving platform. Something especially intuitive that is employed on this attraction is the way that guests interact with the VR technology. Before entering the ride, guests are given helmets with attachments on the brim. Then, once on the ride, guests take the VR device that is attached to the seat and clip in onto the front of the helmet. That eliminates the need for the actual VR device to be sanitized every time, only the helmets. This seems to be the VR solution that parks need, and hopefully will lean towards in the future.

What are your thoughts about VR usage on roller coasters and other attractions? Discuss in the comments section below.