While you might not realize it at first glance, over the last several seasons, the additions to Carowinds have made the “place where the Carolinas come together” an incredibly well-rounded theme park.

Whether it’s been the additions of world-class roller coasters with Fury 325 in 2015 and Copperhead Strike earlier this season, new water park experiences with the re-branding of Carolina Harbor in 2016, family-friendly attractions with 2017’s County Fair and 2018’s Camp Snoopy, or even the “re-invention” of Carowinds’ culinary options over the last several years, Carowinds is constantly evolving. 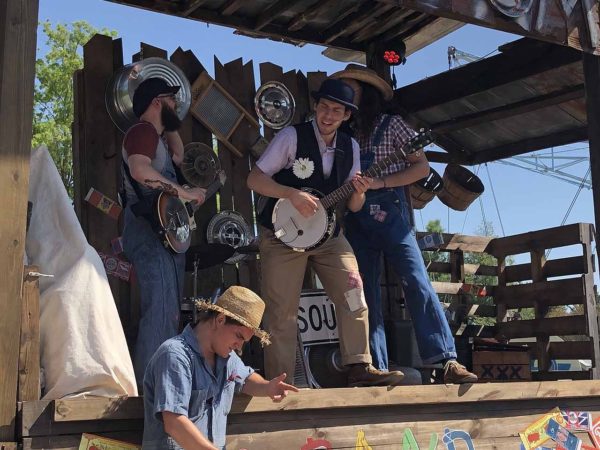 Next on that ever-evolving list if Carowinds’ new show line-up is any indication? Live in-park entertainment.

At many regional theme parks, you might be lucky to find the occasional musical/theatrical act or “stunt spectacular,” that are often considered “afterthoughts.” However, this season, Carowinds has debuted FIVE new shows (including four debuting over this past Memorial Day weekend) that are performed in locations around the park and are a great complement to Carowinds’ outstanding ride portfolio. 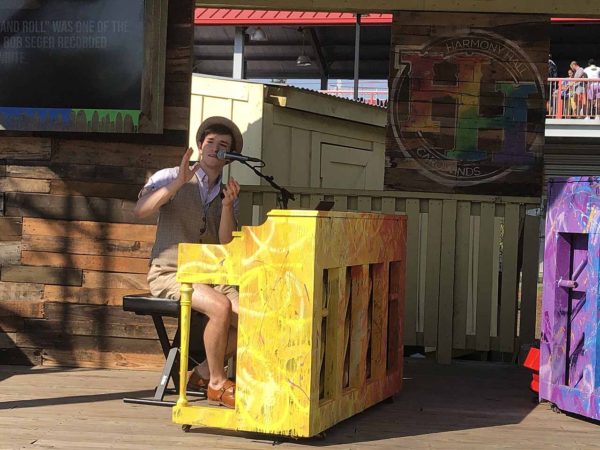 While visiting the park this weekend, I took some time to experience all five shows, and in doing so, came to the realization that if rides aren’t your “thing,” then these shows are ALL fantastic alternatives. Here’s a quick run down! 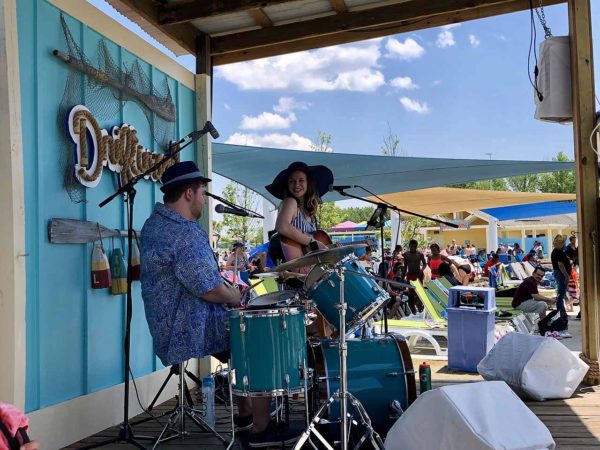 Where it is: Near Surf Club Harbor inside of Carolina Harbor, Adjacent to Schooner’s Beach Bar.

What it is: A duo playing easy listening “beach” music – fits the surrounding area very well!

The first show I took in was “Driftwood,” featuring the talents of two former high school classmates: Summer on Acoustic Guitar, and Austin on Drums. Located near the Surf Club Harbor wave pool, the duo played about a 25-30 minute set of “beach-inspired” songs, including songs by the Beach Boys, Bob Marley, and Jimmy Buffet, putting their own “flair” on all of their songs. As you can see in the videos below, the duo had a great sound! I only wish more people had stopped to watch them. They were fantastic! 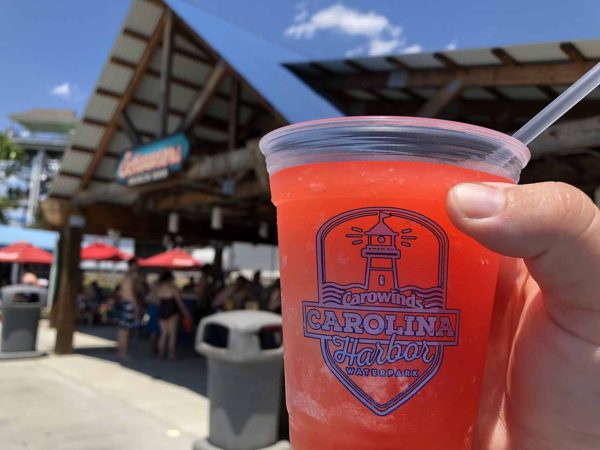 A pro-tip for your Driftwood viewing experience: Shade comes at a premium in Carolina Harbor, so if you can, I highly recommend staking claim to a bar stool at the adjacent Schooner’s Beach Bar and enjoying a frozen cocktail or ice-cold beer (for those 21+, of course) while Driftwood performs, and viewing the concert from the stage.

Where it is: The Crossroads Gazebo, in front of Boo Blasters on Boo Hill

What it is: A duo playing guitar and drum interpretations of pop songs. 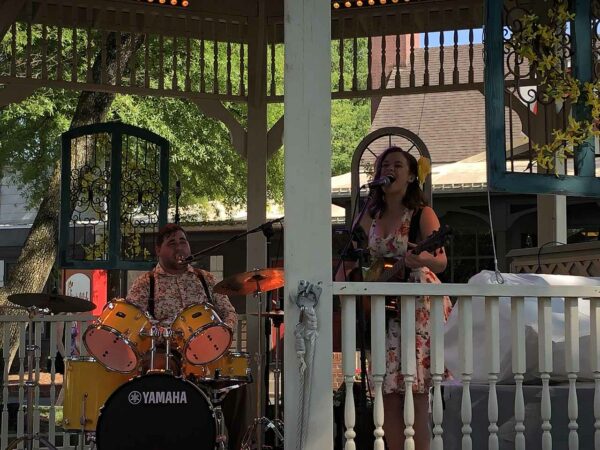 If this duo looks familiar, it’s because Summer and Austin of Driftwood are also the Jessamine Duo. (They suggested checking out their “twins” the Jessamine Duo while performing as Driftwood.) However, there was no Jimmy Buffet or Bob Marley in this set, as the Jessamine Duo’s set list was completely different from Driftwood and felt a little more “upbeat.” It included songs by the Dixie Chicks (Long Time Gone), The Proclaimers (I’m Gonna Be [500 Miles]), the Jonas Brothers (Burnin’ Up) and Duffy (Mercy).

These two were fantastic and I wish my phone wasn’t dying so that I could share more photos and videos of their performance — all the more reason to catch them again this season! Summer and Austin both grew up not far from me, so on a personal level, it’s cool to see “semi-local” people performing on a big theme park stage! The Crossroads Gazebo is located under some great shade trees, and the nearby planters create a great seating area.

If you’re planning your trip around their schedule, Driftwood performed in the early afternoon (1:30 and 2:30), and Jessamine Duo were in the later part of the afternoon and evening. (4:30, 5:30, 6:30) These schedules are all subject to change! 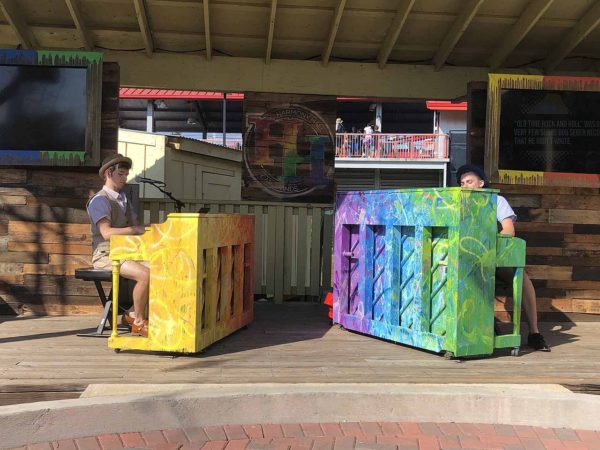 What it is: Dueling Pianos

Where it is: The Harmony Hall Patio

With their multi-colored instruments, Matt & Collin are the talented pianists that make up “The UpRights.” If you’ve ever seen “Dueling Pianos,” before, the concept is similar enough to understand. The two musicians took turns singing and doing piano solos, and “played” really well off of one another. The set I saw (and they have multiple sets) was their “Rock Rewind” show, where they played piano versions of songs made famous by artists including Bob Seger, Elvis Presley, Deep Purple, Fleetwood Mac, The Beatles, The Rolling Stones, and The Eagles. 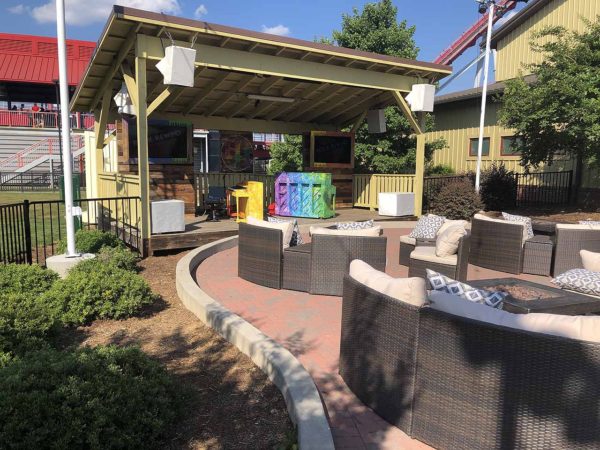 The outdoor seating for The UpRights includes some soft chairs situated around fire pits. These are going to be popular on a crisp summer night!

Check out “The UpRights” in action below! 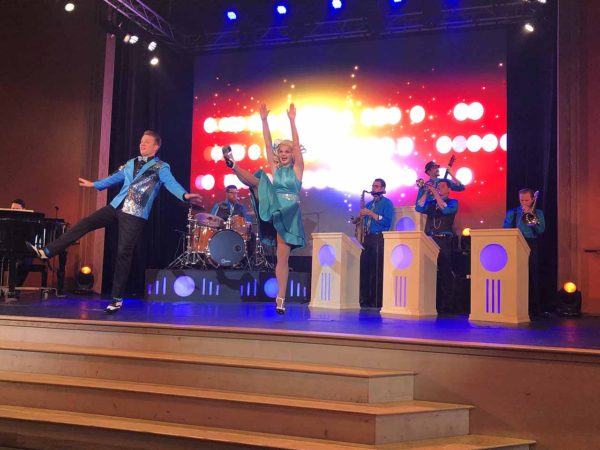 Where it is: Inside Harmony Hall Marketplace

What it is: Popular music, with a big band twist.

If Dinner (or lunch) and a show is what you’re looking for, head to Harmony Hall Marketplace and check out the Spark City Swing Machine. (I’m not sure if this is where they get their name, but the nickname for Spartanburg, SC, located about 90 minutes from Carowinds, is “Sparkle City,” and is sometimes shortened to “Spark City.”) Featuring 6 musicians – piano, drums, bass, trumpet, trombone, and sax/clarinet –  and two vocalists, the Spark City Swing Machine has one of the larger casts of any show at Carowinds, but more importantly, a sound to back it up. The group put their “Swing” sound on several modern favorites, including Carly Rae Jepsen’s “Call Me Maybe” and Meghan Trainor’s “All About That Bass.”

They even got a little Justin Bieber into the act!

The music of the Spark City Swing Machine is likely to get you up and dancing for sure! 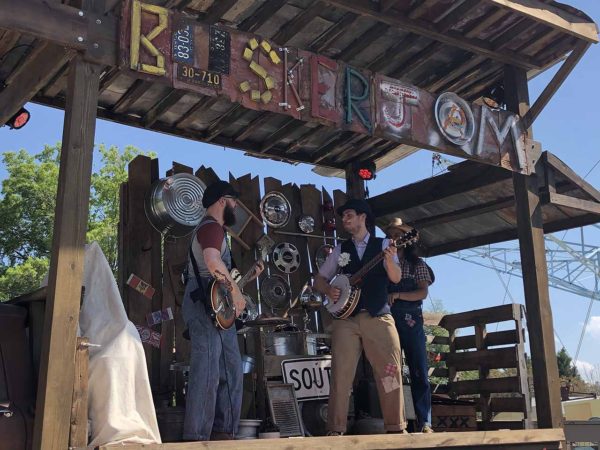 Where it is: Blue Ridge Junction, next to the Mountain Gliders.

What it is: “Pickin'” and Percussion, with some funny moments.

Busker Jam debuted earlier this season, and is produced by JM Music Design, who also produced “Brew Beatz” at last year’s Great Carolina Fest. In this show, we join the four buskers – Gus, Earl, Larry and Cletus – as they make some Moonsh—Music, and try to get their truck “Rusty,” started in order to escape “the law.” There are some great musical moments in this show, but with some genuinely funny moments as well. The musicians playing the Buskers have a great rapport with one another, and I found myself laughing multiple times throughout the 25 minute show featuring a “genuine heavy metal” band!

There was also some great audience interaction as well as they tried to get “Ole Rusty” Started. And if you’re going to involve a banjo in the show, you’re almost obligated to play “Dueling Banjos” from “Deliverance,” even if the instrument that’s “dueling” is percussion being played with wrenches on copper pipes.

As far as a recommendation for seating for Busker Jam, I think a seat on the left side is optimal for Busker Jam, especially if you want to get a good look at Cletus fixing Ole Rusty and/or playing the xylophone. He moves those mallets fast! (And if you need to cool off during the show, you have the option of some of Granny Byrd’s Blue Ice Cream, or an ICEE from the nearby ICEE Mix-It-Up/Coke Refresh stand.

If you take these shows, and add them to the returning (and USA Today 10Best Award Nominated!) “Seasons of Cirque,” which will re-debut at Carowinds later this June, you’ll have almost a full day’s worth of fantastic live entertainment options! (So many options, that I can’t even come close to picking a favorite!)

Be sure to check them out this summer! (Showtimes and Performance Dates Vary by Show — be sure to pick up a performance guide when entering Carowinds for the most up-to-date schedule information!) 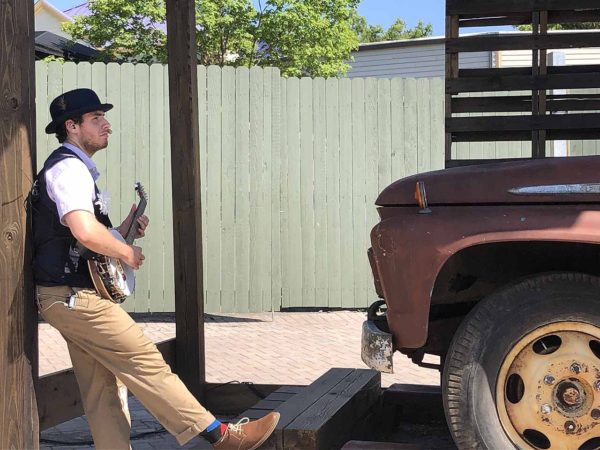 Have you experienced any of Carowinds’ live shows this season? Which one was your favorite? Let us know in the comments below!