Dinosaur Island Returns to the Columbus Zoo with New Dinosaurs

The Columbus Zoo and Aquarium is gearing up for even more summer fun with the addition of new rides and attractions. This May, guests will be able to enjoy a journey back in time on the Dinosaur Island boat ride and get an adrenaline rush on two new rides in the Zoo’s Jungle Jack’s Landing area. 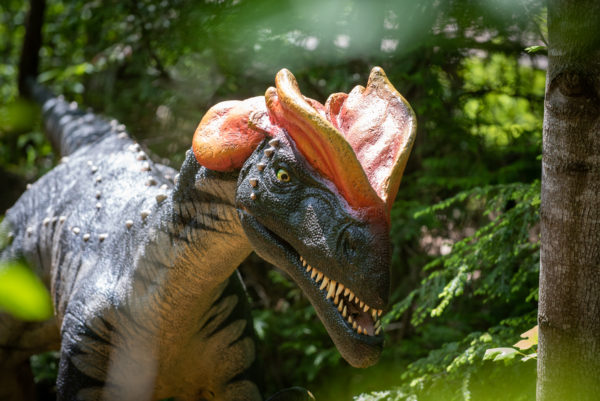 Back by popular demand, Dinosaur Island transports guests 65 million years in the past on a quest to find more than 30 animatronic dinosaurs. Made of steel with a urethane waterproof skin, the dinosaurs have eyes that shift and blink, tails that move, mouths that make loud noises and electronic “brains” that activate and control their movements and sounds. The result is a thrilling experience that is sure to delight visitors of all ages!

This year’s Dinosaur Island ride features 12 new species of dinosaurs and some returning favorites to include the largest (Tyrannosaurus rex, Brachiosaurus and Giganotosaurus) and the smallest (Compsognathus) prehistoric creatures.

Starting May 18 and running through Oct. 27, guests will have the opportunity to enjoy this expedition by foot path and water taxis. A special admission ticket is required for entrance and is not included with Zoo admission. Admission to Dinosaur Island is $3 for general admission, $2 for Columbus Zoo members and free for Columbus Zoo Gold Members, as well as included in the price of a Zoo-It-All ride wristband. Explorers of all ages will enjoy this adventure, whether they have expert knowledge or are discovering dinosaurs for the first time. 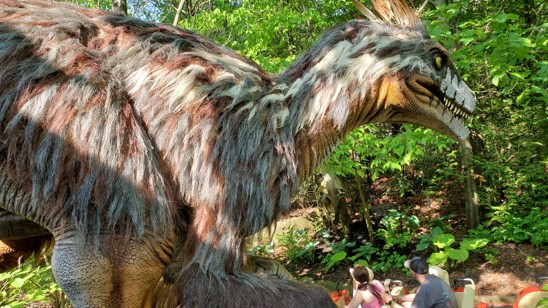 Take a ride with us on the Dinosaur Island boat ride.

And here’s a 360 degree video so you can look around wherever you want, almost like you’re riding with us!

The Zoo also recently opened two new rides in Jungle Jack’s Landing for the first time in 10 years – Falcon Fall and Sugar Glider! Falcon Fall is a drop tower that rises 50 feet above Jungle Jack’s Landing, giving its riders a perfect “birds eye” view of the area – until they dive back to Earth! Sugar Glider is a classic paratrooper-style attraction that swings its riders in a circular motion, rising to heights of over 25 feet, and then swooping back towards the ground.

Both Falcon Fall and Sugar Glider have height requirements of only 42″, allowing families to experience the thrill together. Falcon Fall, Sugar Glider, and the rest of Jungle Jack’s Landing rides are currently open on weekends only, but will open for daily operation on May 23. Each ride costs $2 per rider and is free for Columbus Zoo Gold Members, as well as for Zoo-It-All wristband holders.

Columbus Zoo guests can enjoy unlimited rides on Sugar Glider, Falcon Fall, Dinosaur Island and more during their visit by purchasing a Zoo-It-All wristband. These wristbands also include rides on the Grand Carousel, the Wendy’s North America Train, camel rides, pony rides, other Jungle Jack’s Landing rides, and movies at the 4-D Theater. The newest feature at the 4-D Theater, “The Lost World,” provides guests with the opportunity to continue their prehistoric adventure and to keep an eye out for some familiar faces who have made their way from the big screen to our very own Dinosaur Island!

Revenue from these family-friendly attractions helps to support the Zoo’s operating budget, which also benefits the Zoo’s animal care and conservation initiatives.