We’ve selected 19 of our favorite roller coasters that are celebrating their 20th anniversaries this year, and will profile them every other Thursday for the next several weeks. This week we’ll be taking a trip to Six Flags Great Adventure to talk about yet another Bolliger & Mabillard coaster, the floorless coaster Bizarro.

“Medusa …she’ll turn you to stone!”

Bizarro originally debuted on April 2, 1999 as Medusa, the world’s first floorless roller coaster, located in the park’s Frontier Adventures section. To tie in the Greek mythology of Medusa to the western theme of the area, Six Flags Great Adventure introduced “The Legend of Medusa’s Mine” in a press release:

“Once a beautiful woman, Medusa was punished by the goddess Athena for her indiscretions and turned into a hideous monster. She had hair of snakes and the power to turn men to stone with her electric eyes, and was hunted and conquered by the brave Perseus. This made her one of the most famous beasts of Greek mythology. During the Gold Rush era, legend has it that she was banished to a deep, solitary gold mine. Although no miner was brave enough to seek her, they believed in her presence and named this wicked place “Medusa’s Mine.”

This is where riders will begin – in the Old West, known as the Frontier Adventures section of the theme park. Unlike the cowardly gold miners, brave park Guests will seek fame and triumph like Perseus before them. The twisted mass of green steel is the demon they must conquer.” 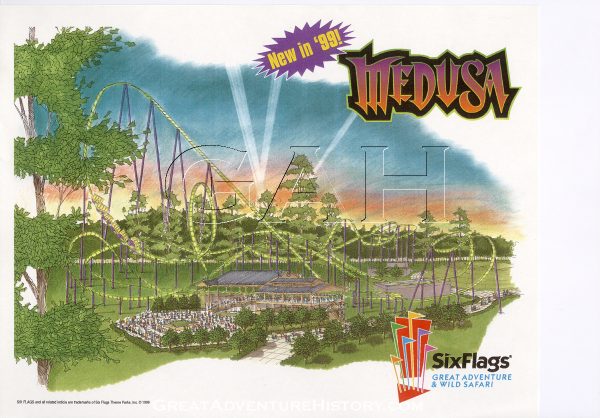 The addition of Medusa gave the park it’s 13th coaster, which was the most of any theme park on the East coast at the time.

Being the world’s first floorless coaster, Medusa gave riders a thrilling new way to experience coasters. The ride type was similar to existing sitting B&M coasters such as Kumba at Busch Gardens Tampa. The main difference was that, upon loading, the floor of the station gave way, leaving the riders seated elevated and completely open on top of the track. Many publications described the experience as giving the sensation of being in a flying chair.

Although riding with your feet dangling had already been done with inverted coasters, unlike these coasters, floorless coasters’ views are not restricted above by the track.  As far as ride experience goes, Medusa had a similar track layout to Kumba, with seven inversions that include a vertical loop, dive loop, zero-g roll, cobra roll, and interlocking corkscrews. 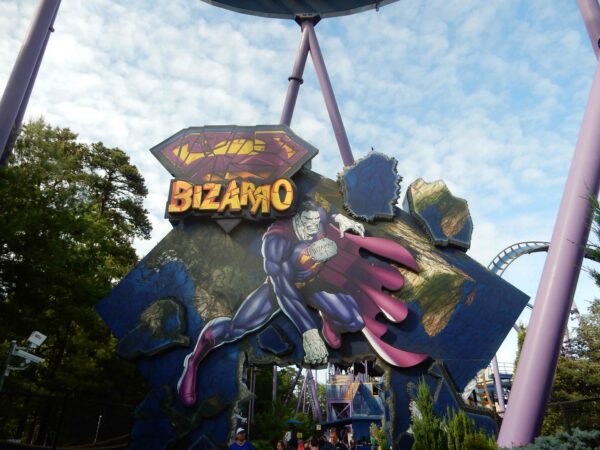 In October 2008, Six Flags announced that Medusa would be redesigned for the 2009 operating season. On April 1, 2009, Six Flags announced that Medusa would be changed into Bizarro and incorporated into Six Flags’ DC theme. Designed to be an anti-Superman clone, the DC Comics character Bizarro is completely unpredictable, doing the opposite of all human behavior. Bizarro has similar powers to Superman, although often with opposite effect. For example, instead of having heat vision and freeze breath like Superman, Bizarro has “freeze vision” and “flame breath”. These elements would be incorporated into the redesign of the ride.

Six Flags revealed the story of Medusa’s conversion into Bizarro through a series of comic book-styled panels located along the ride’s queue. According to the story, Lex Luthor plots to build a “Wormhole Ray” under a LexCorp dummy corporation called “Clawshun Industries”. Daily Planet photojournalist Jimmy Olsen uncovers the link between Clawshun Industries and LexCorp, but is captured by LexCorp scientist, Dr. Teng. Olsen attempts to contact Superman using a signal watch, but Dr. Teng snatches it and attempts to use the watch to lure Superman into a trap with the Wormhole Ray. However, things go faulty and the Wormhole Ray fires a purple bolt of lightning that splits into two, striking both Superman: Ride of Steel at Six Flags New England and Medusa at Six Flags Great Adventure, converting both rides to Bizarro and summing Bizarro himself from “Htrae”.

For Medusa, nothing physically changed in the ride’s track layout. However, along with a new vibrant blue and purple paint scheme, several visual and special effects were added to the ride. A series of gold Superman shields were added around the track at the bottom of the first drop, along with the addition of a cool mist effect, to simulate Bizarro’s “freeze vision”. Next, a pair of flame jets were added at the sides of the ride’s dive loop to simulate Bizarro’s “flame breath”. After the brake run, several building facades from “Bizarro World” were added, with a few “near misses” as the train passes close to and through them. Additionally, the “auger of doom” (a weird steaming, spiky drill device is the best way to describe it) was placed in between the interlocking corkscrews, adding a headchopper effect. There were also several lighting effects added at various points of the ride. 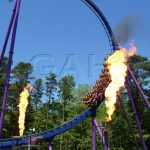 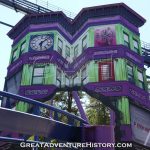 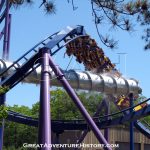 A sound system was added to the ride trains to accompany the added visual effects. The sound system featured music, sound effects, and random movie quotes from various points of pop culture timed to the ride’s elements. The clips made absolutely no sense collectively (for example, Gandalf’s famous “YOU SHALL NOT PASS!”  line from The Lord of the Rings belts out as you encounter the first drop), but this was to be expected given the new theme of the ride. Other clips include “Game over, man!” from Aliens and “Wheels on the Bus”. The ride ended with Bizarro declaring “BIZARRO NUMBER ONE!” followed by a techno song with “Bi-zar-ro, Bi-zar-ro” repeated along. The ride’s sound system was removed in 2013. Bizarro currently is the only ride that retains the Bizarro conversion, as the Six Flags New England coaster was reverted back to Superman to go along with the popularity of Man of Steel and Batman v Superman: Dawn of Justice in theaters.

“19 for ‘99” continues in two weeks with our next coaster: BuzzSaw Falls at Silver Dollar City!