LEGOLAND Discovery Center Columbus officially opened its doors to the public on Friday, September 28th and Coaster101 was invited to attend the special celebration. Merlin Entertainment’s 12th and newest LEGOLAND Discovery Center in North America and 22nd worldwide is located at Easton Town Center in Columbus, Ohio and is ideal for families with children aged 3-10 years old. Having a four-almost-five year old son who has a growing love for LEGOs, this was right up our alley!

The opening ceremony included a children’s parade led by Bertie, the LEGOLAND Discovery Center mascot and the Creative Crew kids; brief remarks from local dignitaries and an unconventional ribbon-cutting which consisted of knocking down a giant LEGO brick wall.

“It has been a thrilling journey to the grand opening of LEGOLAND Discovery Center Columbus and we are overwhelmed by the support and excitement we’ve experienced across the state of Ohio,” said Jacob Kristensen, general manager. “We are excited to give families a truly unique experience and the chance to be immersed in a colorful world of creativity and imagination.”

“Easton is all about experiences and family and LEGOLAND Discovery Center Columbus is a combination of both,” said Jennifer Peterson, chief executive, Easton. “This is a place that families can visit, build, learn and create together. With more than 26 million annual visitors to Easton, LEGOLAND Discovery Center Columbus will be a destination not only for Ohio, but the entire region.”

“We are all about families having fun together through playful learning,” said Kristensen. “We provide two to three hours of interactive and educational entertainment for families, no matter the weather! We want children and their parents to be inspired to build anything, anywhere inside the attraction.”

After the grand opening celebration, it was time for us to explore the Discovery Center ourselves. LDC Columbus is actually located on two floors. On the first floor you’ll find the entrance and ticket area, store, Factory Tour, and Kingdom Quest ride. Here’s a rundown of what you’ll find inside LEGOLAND Discovery Center Columbus. 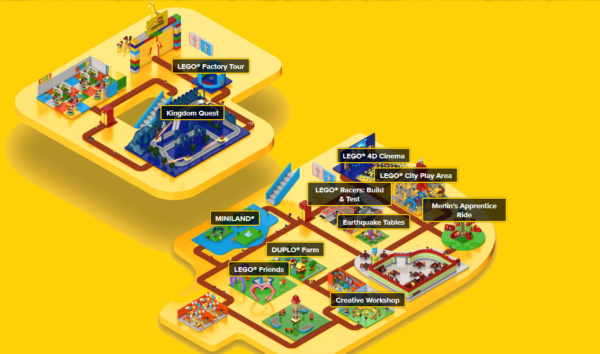 When you enter the Discovery Center the first attraction is the Factory Tour. You’re taken in a group inside a room with four screens facing each other to get a behind the scenes look into how LEGO bricks are made. A control panel with buttons and joysticks allow guests to create their own mini-figures on the screens. When the “tour” is done the doors open and you’re free to move on to explore the rest of the center. 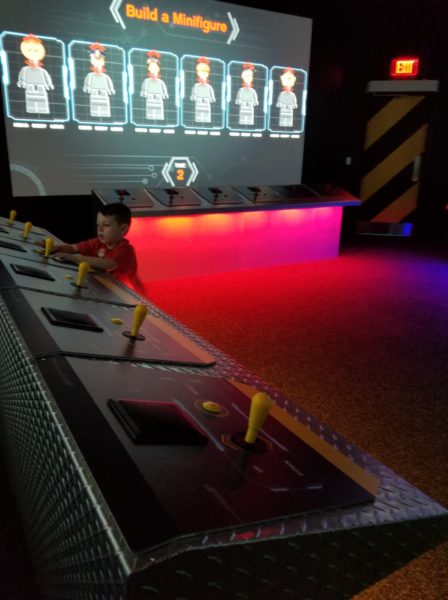 The next attraction you come to is the Kingdom Quest trackless dark ride by Alterface with vehicles by ETF. This roughly four minute long ride features physical sets, animatronics, and screen based shooting sequences as your goal is to rescue the princess by zapping spiders, skeletons, and more. Kingdom Quest is a great example how you can squeeze a fun ride into a very small space (so those larger amusement parks without a dark ride have no excuse!). You must be able to sit upright to ride and kids under 4’3” must be accompanied by someone over that height. 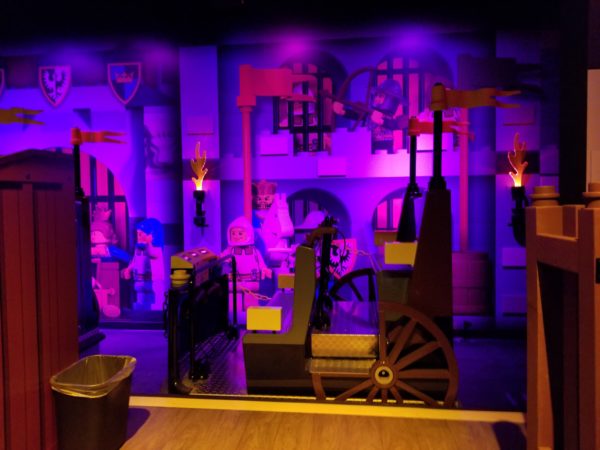 An on-ride photo is taken during the adventure and you have the option to purchase it upon exiting the ride. Then, it’s time to go down the stairs (or elevator) to the lower level.

One thing that makes each LEGOLAND Discovery Center unique and a reason to visit each one is MINILAND where you’ll find LEGO-sized replicas of many favorite local landmarks. This 1.5 million brick MINILAND is themed to Ohio – specifically, Columbus, Cleveland, and Cincinnati. Columbus gets probably around eighty percent of the display, including COSI, North Market, the State House, and, of course, half of Ohio Stadium. The details of the displays are fantastic. 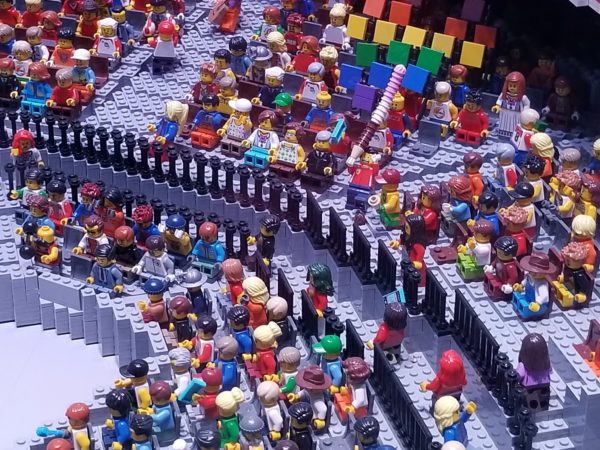 Be sure to stay for at least one day to night cycle to see fireworks and all the lights of the city come on. There are several buttons and other interactive elements that help bring the land to life. I will say, as a theme park fan it feels like a lost opportunity to not include anything from Kings Island or Cedar Point! Heck, even something from Geauga Lake or Wyandot Lake would have been really cool.

Just a few shots of the incredible level of detail that have gone into the Ohio themed Miniland at the newly opened @ldccolumbus #lego #ohiogram Stay tuned for a full walk through video.

Bricks of all shapes and sizes

Walking on from MINILAND, you’re dumped into a large open room with several different play areas. From LEGO Friends to DUPLO to Build and Test, there’s the perfect LEGO size for any age. Seriously, they have large, soft blocks for the youngest of children, to DUPLOS, to Technic for the oldest kids. Parents will love that there are areas to sit down and relax here too while the children build on the earthquake tables or climb and slide in the Construction Site Play Zone. 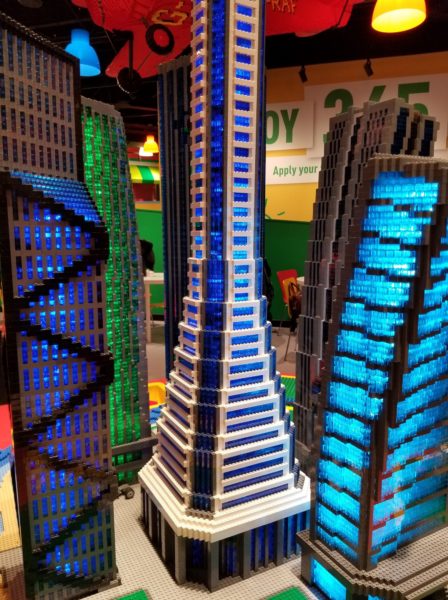 The other ride at the Discovery Center is surprisingly also interactive. Instead of simply pulling a lever like Dumbo or your other typical spinning rides find at almost every amusement park, on Merlin’s Apprentice you’re required to pedal. The faster you pedal, the higher your enchanted cart will go. It’s a fun take on a classic ride. The only downside is those shorter or taller in nature may have some difficulty with the pedals.

Merlin’s Apprentice is one of two interactive rides at #ldccolumbus On this spinner you have to pedal faster in order to go higher! It’s a nice long ride cycle with only a seat belt for a restraint. So much fun but if you’re taller you might want to bring some shin pads ? #legodiscoverycenter #eastontowncenter

In the 4D Theater, you can enjoy three different exciting LEGO movies shown throughout the day with additional wind, rain and snow effects. I was really impressed with the theater. I like how there were lights used on the side walls of the theater to help bring the action out of the screen and into the theater. Spoiler alert: The LEGO Movie 4D is hilarious! Highly recommend you see that one if you have the option. Theme park fans with especially appreciate it. 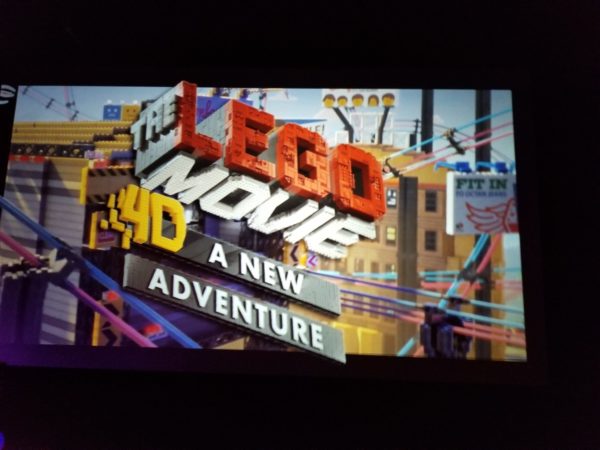 Exit Through the Gift Shop

After you’ve experienced everything, it’s time to go back upstairs. And of course, what kind of themed entertainment attraction would be complete without exiting through a gift shop.  It’s probably the biggest LEGO store I’ve been to outside of Disney Springs, and it’s at least double the size of the previous LEGO store that has called Easton home for years. You do not need a ticket to walk through the store. Maybe you’ll even be able to find one of our Top Ten LEGO Sets for Coaster Enthusiasts inside! 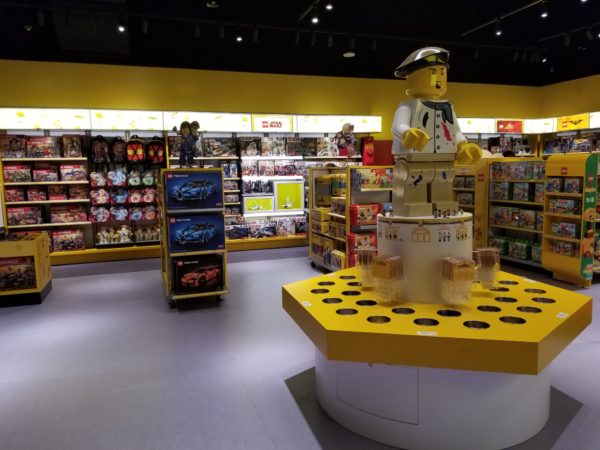 Interactive Fun for the Whole Family

What I like best about LEGOLAND Discovery Center Columbus is that it’s not a passive “stand and look at things” experience; everything is interactive. The rides require you to take action. Even when sitting and watching the LEGO Movie 4D there is a segment in the film where guests are encourage to shout and point at the screen to help the characters out. My super-active son was kept busy and engaged for almost three hours and that is NOT an easy accomplishment! Well done. 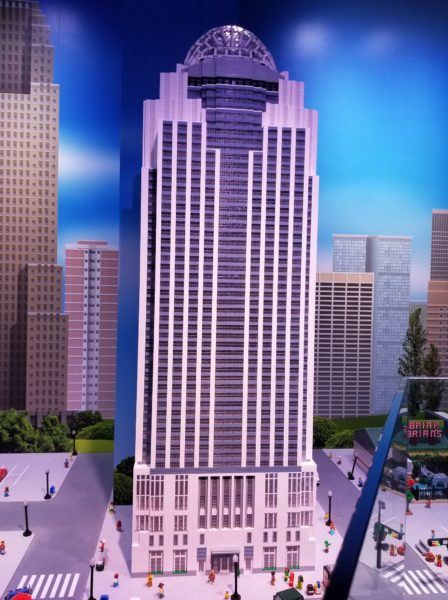 If I Could Add One Thing…

If I could add one thing to improve the LDC it would be this: I wish there were more done with the mini-figure you design on the screen during the Factory Tour. How cool would it be if you were making a digital avatar that traveled with you throughout your day there? For example, what if when you were done riding Kingdom Quest the digital image of your mini-figure you designed appeared on a screen next to your score? Of course your figure would have to be linked to you somehow, maybe either through tickets or a wristband. But imagine the possibilities! Then at the end you could purchase a physical mini-figure to match the one you designed. As it stands, the Factory Tour is the least memorable part of the experience so it would be nice if there were a bigger payoff for going through it. 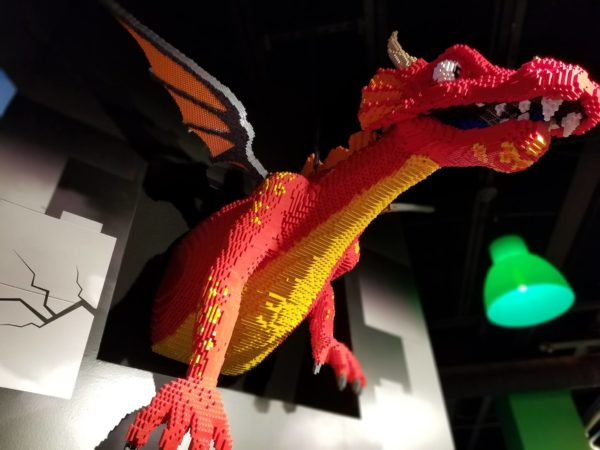 Other Things to Know about LDC Columbus

To learn more about the LEGOLAND Discovery Center Columbus, visit their website:

https://columbus.legolanddiscoverycenter.com/
Or on social media:

Have you ever been to a LEGOLAND Discovery Center? If so, tell me which one and what you thought of it in the comments below!