Is SeaWorld San Diego Getting A Skyline “Horizon”?

On Friday the San Diego Tribune reported on a new project coming to SeaWorld San Diego, slated to open in 2019. The article describes a report by the California Coastal Commission, which will review the project next month, that revealed some details on the new ride. Some of the details in the report include specifications on ride dimensions, including a height of just 22 feet and an area of 1.2 acres.  David Koontz, spokesman for SeaWorld San Diego, told the tribune that “the 2019 attraction will be a ‘horizontal coaster experience’ that will traverse a figure-eight track.” The article also mentions that the attraction will include an inversion for riders. 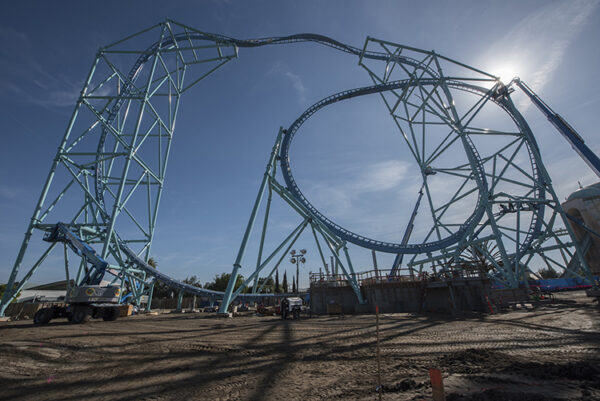 Electric Eel just opened at SeaWorld San Diego this year. Is another coaster on the way?

This description of a low ceiling, horizontal, inverting, figure eight, coaster rang some bells for the Coaster101 team. At the IAAPA Expo last November in Orlando, C101 spoke with Skyline Attractions about two new ride concepts they had come up with based on their SkyWarp design opening at Six Flags Discovery Kingdom this year. One of those models is the “Horizon” coaster. It essentially looks like a SkyWarp figure eight ride, but laid down on its side. In our interview with Skyline, they described the ride as fitting under a 30′ ceiling, and the models of the attraction include an inversion mid-ride. The models of the Horizon certainly make it look like a match for the ride described in the San Diego Tribune report. 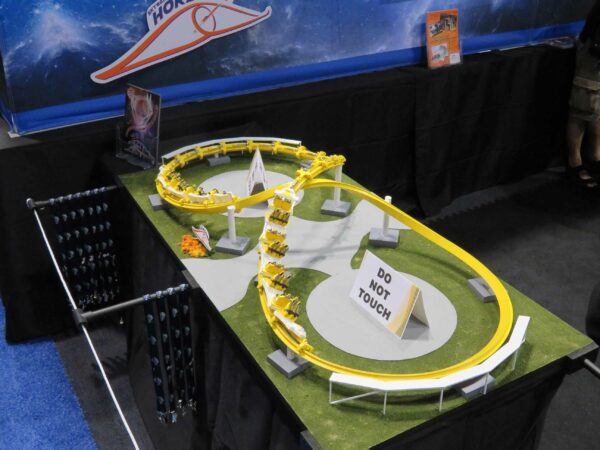 If the ride is a “Horizon”, it will be just the second major attraction built by Skyline Attractions after Harley Quinn Crazy Coaster (which should be opening very soon at Discovery Kingdom). The concept for the SkyWarp had an interesting development cycle, but the Horizon shouldn’t be too much of a deviation from it. It also makes sense for SeaWorld San Diego. The Tribune article quotes SeaWorld interim CEO John Reilly addressing a need for more attractions in a May interview saying, “We’ve studied our competitors a great deal, and we found that they’ve been able to open a lot more attractions across their portfolio with more frequency than we have the last few years.”

Even with that need, coming just a year after the opening of “Electric Eel”,  a huge new coaster might seem like overkill. But the goal of the SkyWarp, and likely its Horizon counterpart, was to come up with a “major” thrill ride that could fall under a 2 million dollar price point. If the Horizon hits this target, then it isn’t unreasonable for SeaWorld to add one on the heels of Electric Eel, and it would certainly add a ride for thrill seekers to a park not known for its major coasters. As Skyline Engineer Adam Yerdon said during our interview at IAAPA, the Horizon is “going to be launching you around these really tight hairpin curves, and through the inversion. So I think we’re going to have ultimately that same “thrill seeker” appeal (as SkyWarp).” Although SeaWorld also said that the new ride will fit with the aquatic theme and educational goals of the park.

SeaWorld San Diego hasn’t made any formal announcements yet, but we expect one to come probably next month (the high time for coaster announcements). Interestingly, if the new ride is a Skyline Attractions Horizon (and we don’t know for sure), it would mean both of Skyline’s first models will have opened in California, across the country from their headquarters in Orlando.

So what do you think, is SeaWorld San Diego going to get the first ever Skyline Horizon, or is some other crazy coaster model coming to the park in 2019? Let us know in the comments below, or share your thoughts with us on Facebook or Twitter. Also, check out the full article from the San Diego Tribune.