S&S Worldwide to Bring Back the Steeplechase Coaster

UPDATE: S&S has released an animation of the new Steeplechase coaster! Watch it below:

Yesterday at the IAAPA Expo, S&S Worldwide announced the return of a classic Arrow Dynamics ride, The Steeplechase Coaster.

A revival of an Arrow classic, S&S brings to #IAE17 the Steeplechase at Booth #: 2217. An Evolution of a Classic, this revived, unique ride-type offers a lower center of gravity for a smoother ride and heightened sense of speed. pic.twitter.com/drTL1y1UCJ

S&S Worldwide purchased Arrow Dynamics in 2002, and since then, coaster enthusiasts have been wondering if S&S would ever revive the classic Arrow Brand and bring back some of the vintage Arrow coasters. Depending on the responses from the parks, the Steeplechase Coaster is the first of what could be the rebirth of the Arrow Dynamics product line.

“The market is ready for the return of classic family rides, ones that bring an entire family together to have fun and one that provokes memories of times long gone in this fast paced digital world,” said Pete Barto, Director of Sales for S&S Worldwide. 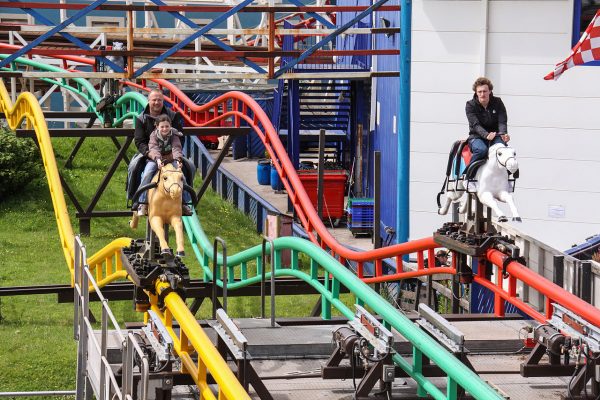 Staying true to the original ride experience was paramount to the re-launch of Steeplechase, but updating the restraint system to today’s standards and designing it in a way that would allow the most guests to enjoy the ride safely was critical.

Having an opportunity to review the original design plans and then see the ride in operation at Blackpool Pleasure Beach proved helpful. Using today’s technology, many modifications and updates were made to the new Steeplechase Coaster design to provide a smooth and reliable ride for all guests.

The new Steeplechase features a 42″ height requirement, which will allow more guests to experience the attraction than the original. Other enhancements to the new Steeplechase Coaster include a Mobius Loop layout with a station bypass to allow for increased load/unload times while not impacting hourly capacity, multiple theming options, and some patent-pending changes to the lift system.

S&S Sansei is showing off an update on a classic attraction, Steeplechase. There’s even a raptor car! #IAE17 #IAAPA pic.twitter.com/ZvJrV5BTGd

President and CEO of S&S Worldwide, Tim Timco, said “The Steeplechase Coaster is really about the evolution of a classic. There is not another ride on the market that can match the benefits and wide appeal to a park that this ride can offer. We are confident that it will be a hit!”

Are you excited for the Steeplechase’s Return? Let us know in the comments below!