Behind the Scenes of Demon: Re-Ignited

One of the most exciting additions to this year’s Halloween Haunt at California’s Great America is the restoration of special effects to their classic Arrow looping coaster, Demon. Back in the day Demon included lighting, sound effects, and water features that over the years steadily fell into disrepair or disappeared from the ride. My vague memories are that the effects really started going away around the late 90s, although I can’t really remember for sure (although I do remember them being there when I was a kid). Over the years many of us enthusiasts yearned for the return of the theming. In another great demonstration of Cedar Fair’s investment in Great America they’ve brought them back, with some upgrades, for Halloween Haunt! This includes things like lighting in both the tunnels, some upgrades at the station, projection mapping effects on the Demon cave, new music and sound effects, a blood red waterfall, and some brand new pyrotechnics. 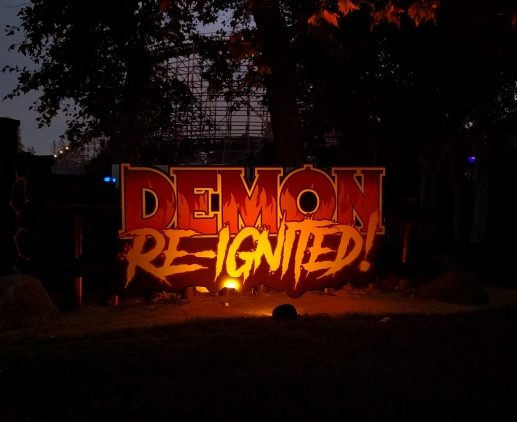 We were incredibly lucky to be invited by Great America to go behind the scenes while Demon was running to get some nice up close views of some of the new effects, and get a new perspective on the classic coaster. Of course, I also had to take the opportunity to ride it a few times. 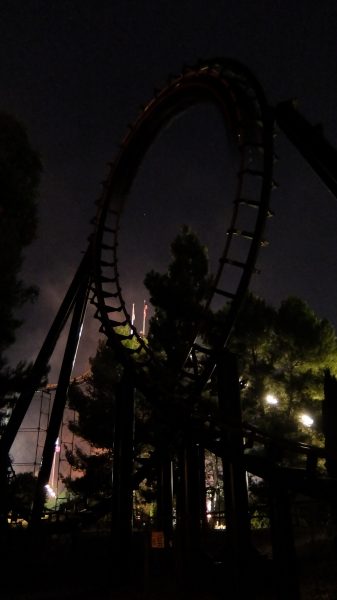 First, the station of the ride has received some new paint and decorations. There was also a large shade structure over a big section of the line that I don’t remember being there before this. More shade is always a welcome sight, and looks like something the park is being conscious of since Patriot also received a new shaded station when it was redone. 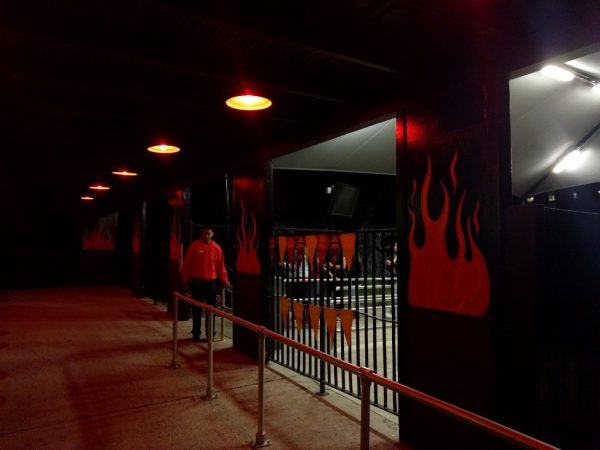 New paint job along the station, and the new awning. 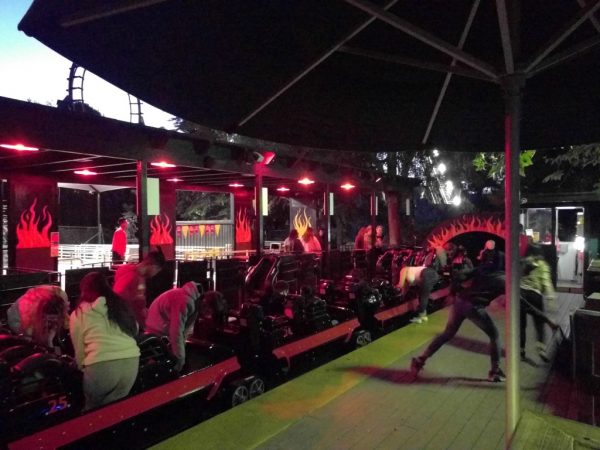 After taking a couple rides, the CGA team led us along the backside of the park, and under the Demon where we could look up close at the projection mapping, pyrotechnics, and strobe lighting around the demon head. 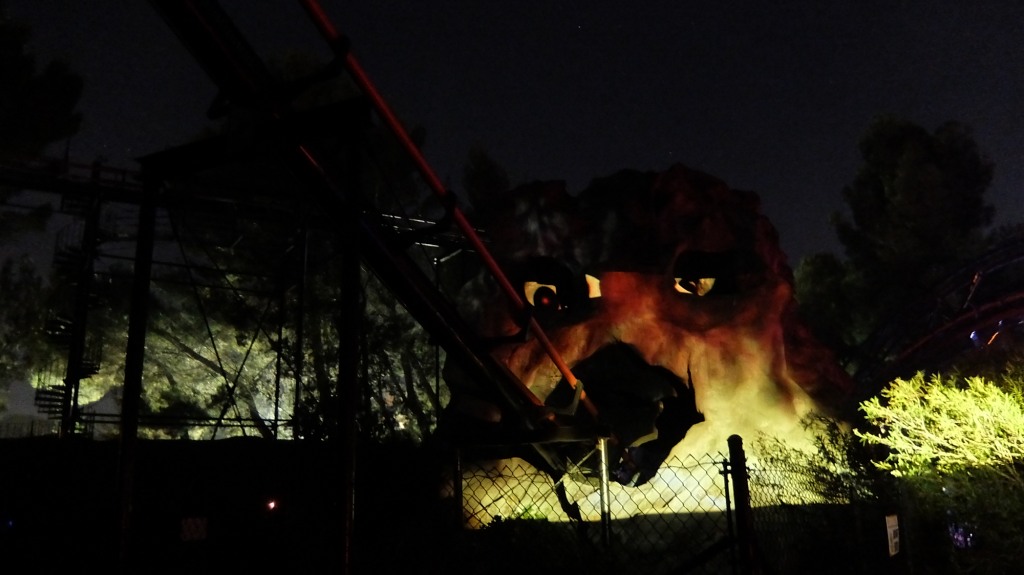 The demon eyes and the dancing flames under it are a little hard to see from the train, but look amazing from the ground!

The level of detail was impressive, and it definitely refreshes the ride. But the effect that I missed most and was happiest to see back is the water fall on the back of the cave. It’s so nice to feel that little spray of water coming through the cave. And while it’s a little hard to tell it’s red from the ride, it looks pretty awesome up close. 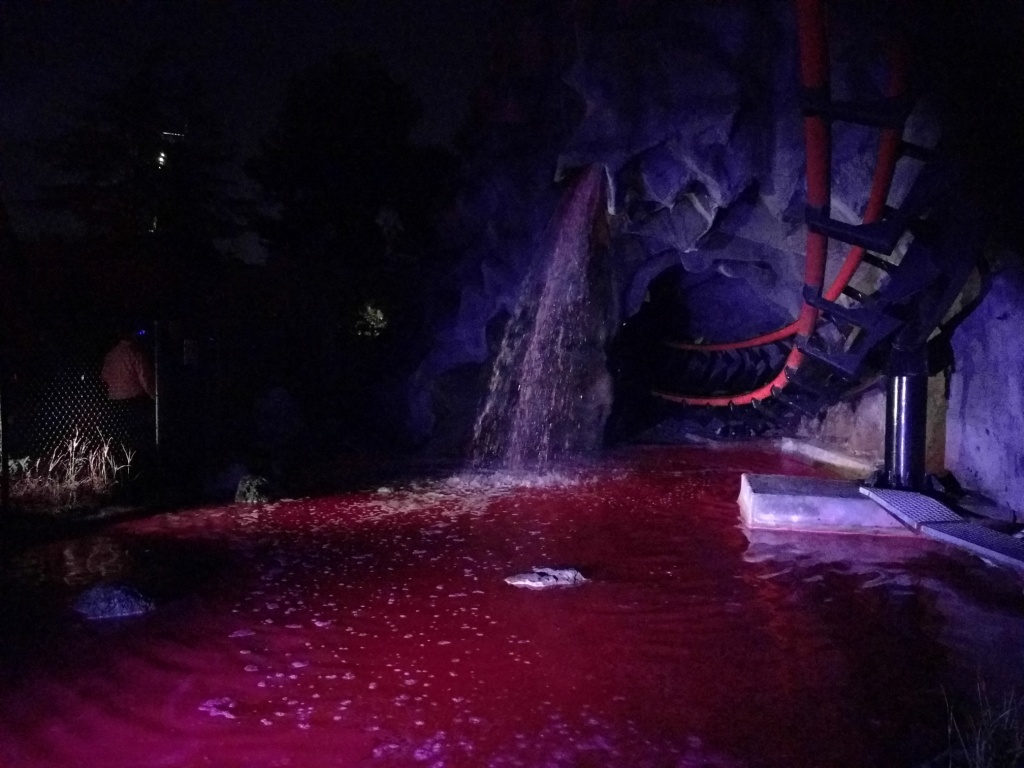 The waterfall being back on might be my favorite improvement, and the red dye is a nice Halloween touch. 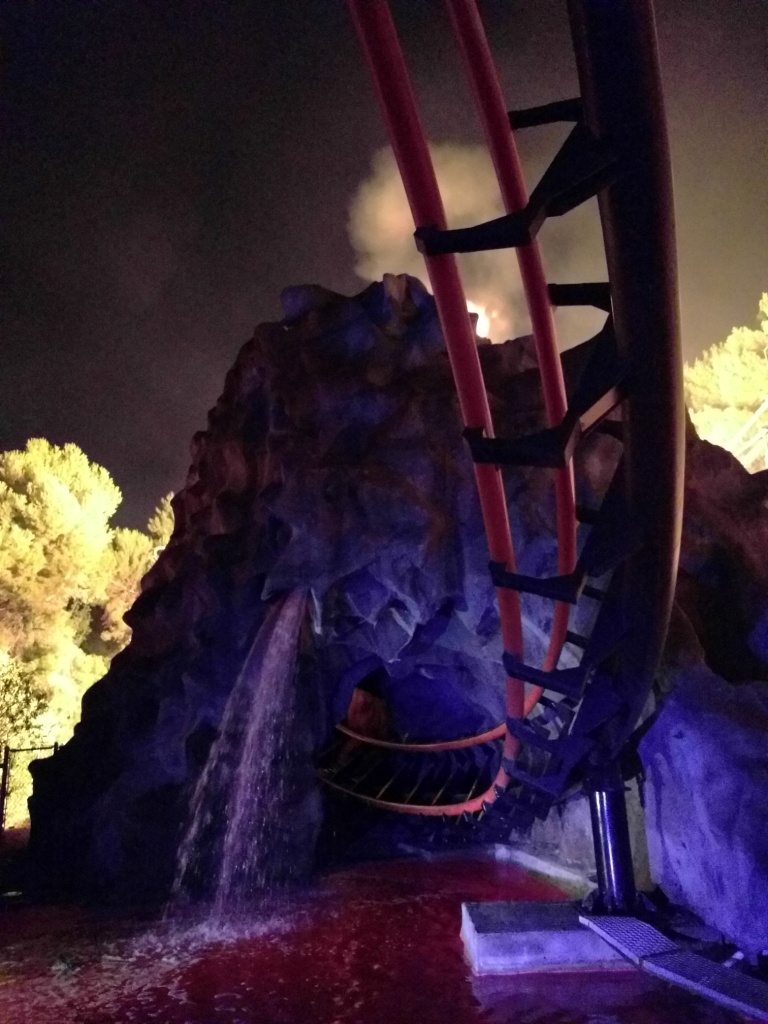 Of course, the thing that definitely stands out the most, and I think was not an original effect, is the new blast of flame in front of the demon head as the train rounds the corner before going into the cave. Interestingly, the flame is actually controlled manually by an operator stationed nearby. It consistently drew an audible extra scream from riders as the train started to head down into the mouth. 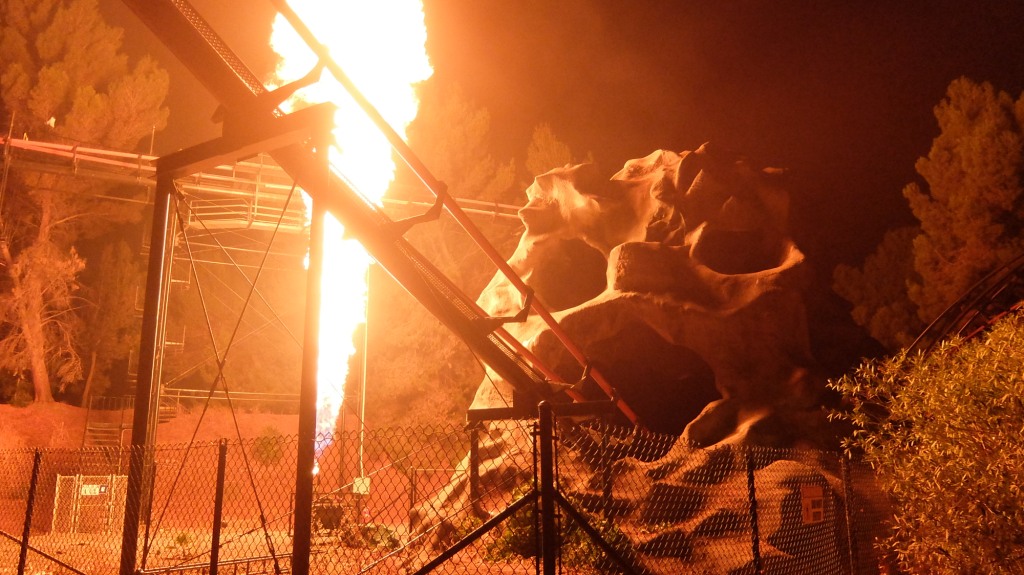 The flame gives a pretty sweet look to the demon head. 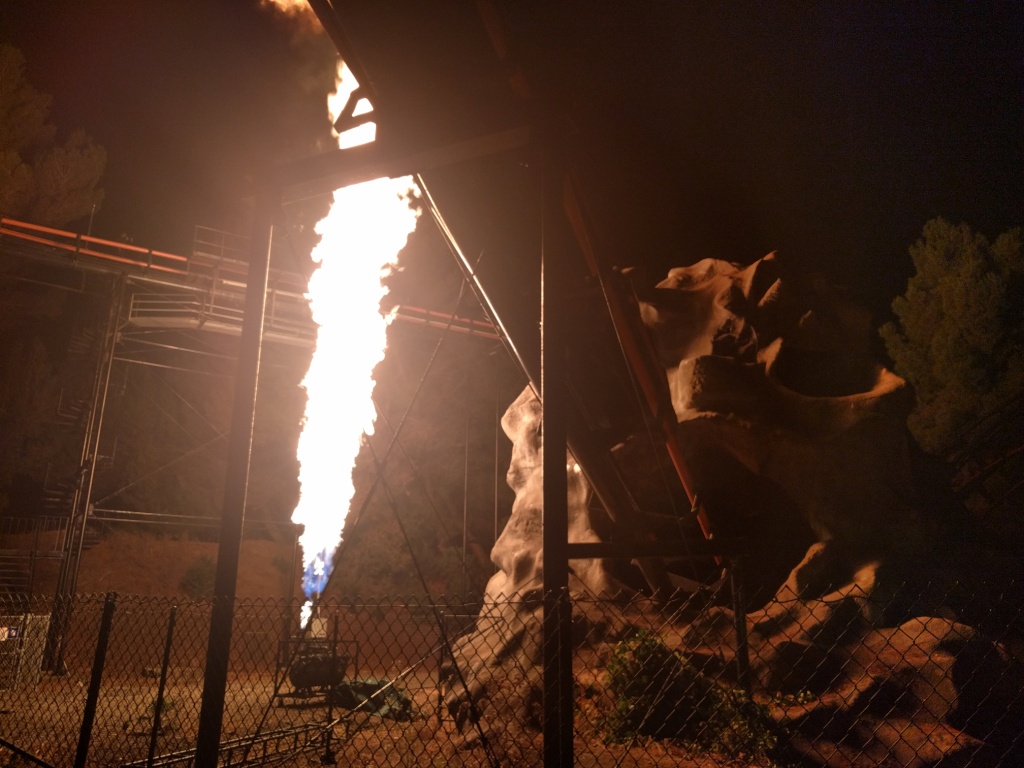 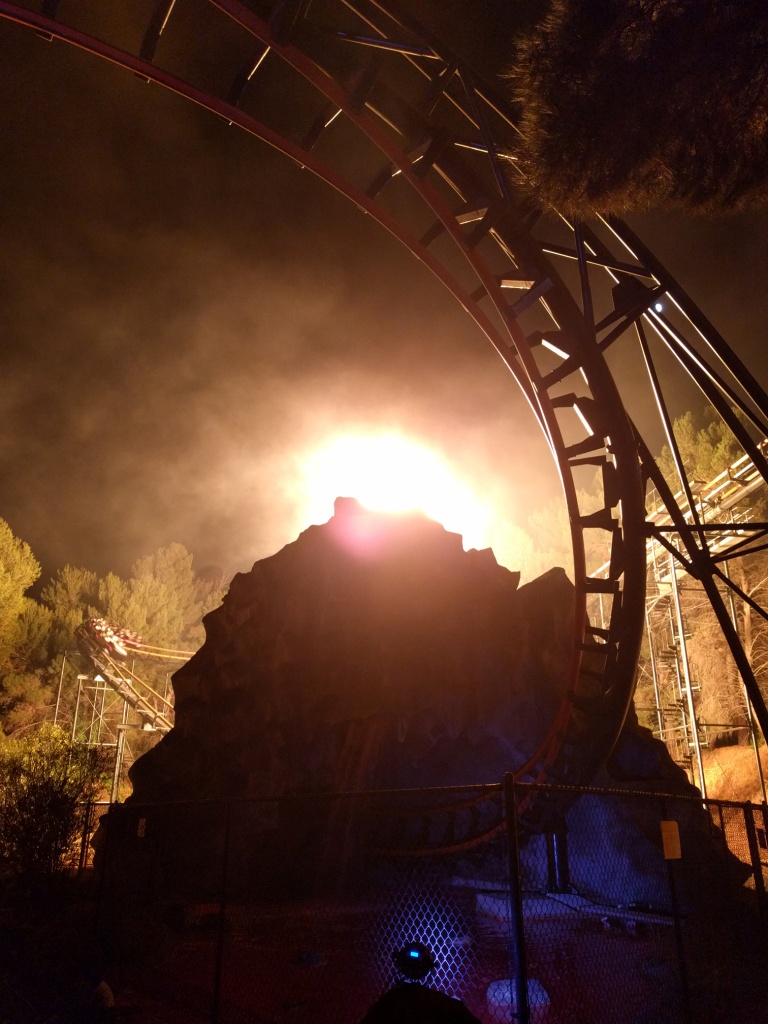 It also looks pretty good from the back. You can see roughly where the train is when the flame blast is fired. 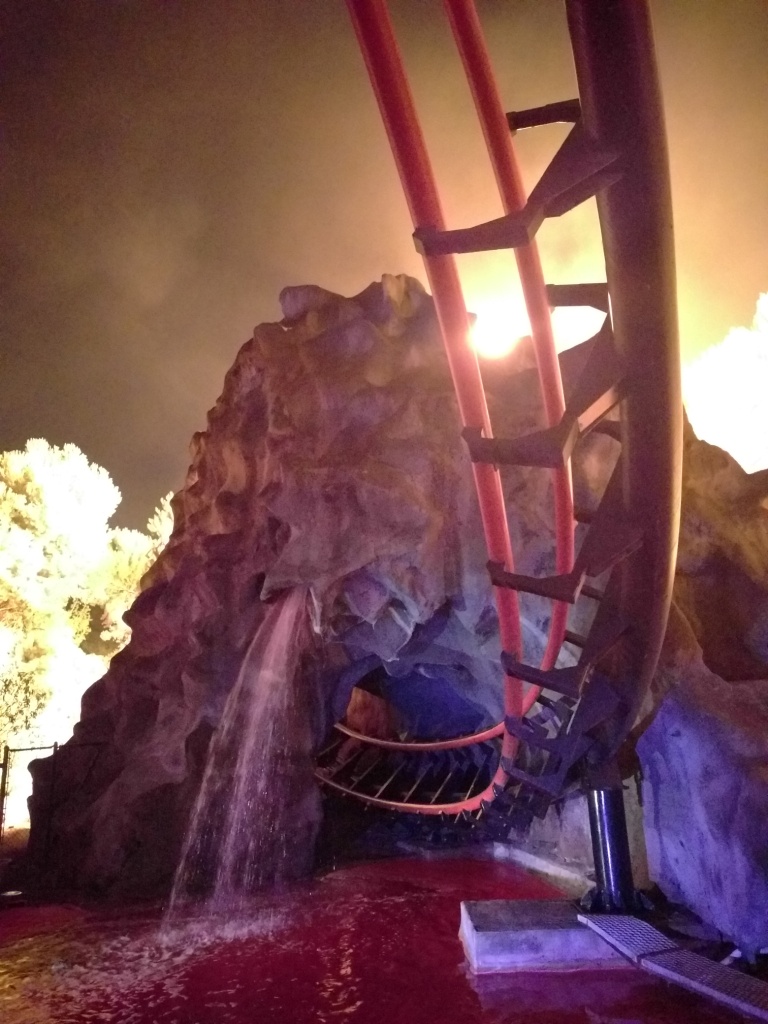 While the bulk of the effects are on the demon head cave, there are other sections with new haunt lighting. Strobe lights illuminate the corkscrews, and new lighting effects shine in the long center tunnel after the loops. 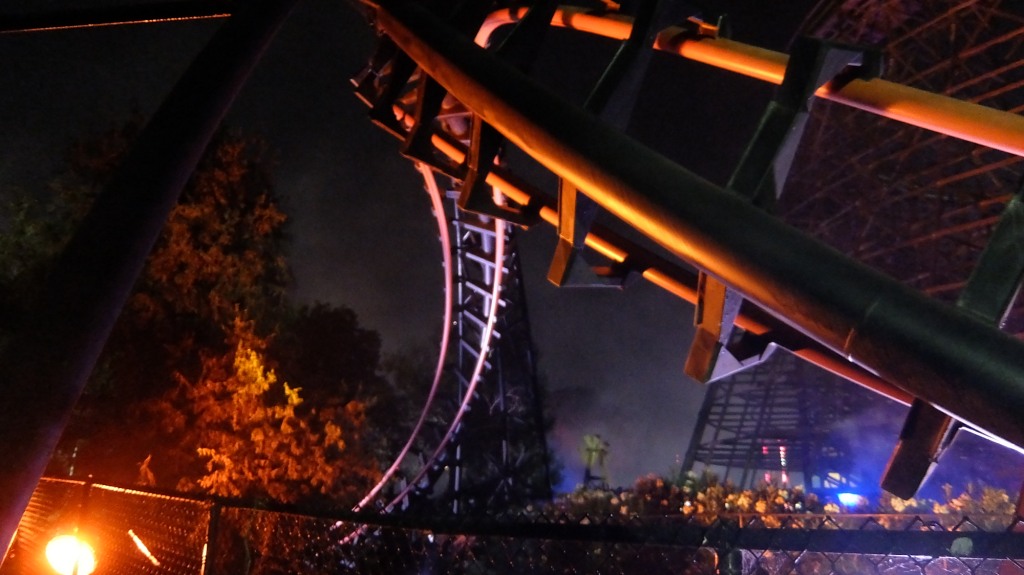 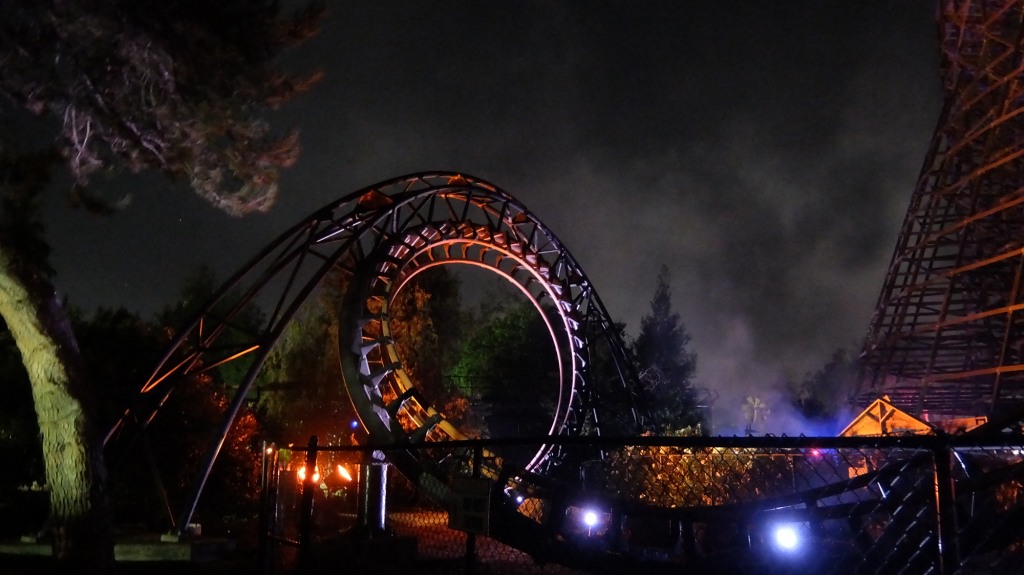 Although they’re more visible from the ground, the impact of the lighting, the flash of the flame, and the extra sound effects are definitely noticeable. They really do make a big difference to the ride, going from a relatively mild looping coaster to a complete experience. Although, while I admit that the lighting effects in the second tunnel are cool, my memories of it as a kid were it being pitch black and I sort of wish it were still dark (especially at night). Still, the overall effect is a great improvement. 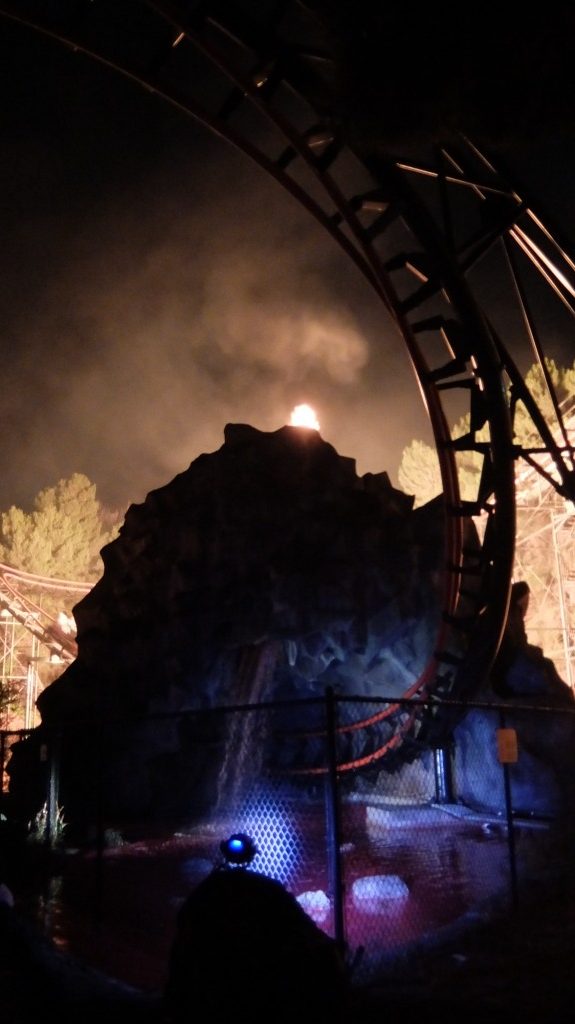 The Great America press releases say that the Demon Re-Ignited is only for Halloween Haunt, although the answer was less clear when I asked the PR team. They wouldn’t give a definitive answer, but If I had to guess, I’d say some effects will stay and some will be removed after Halloween. Likely no more pyrotechnics and strobes, but I could see some of the tunnel lighting, sound effects, and the water staying. Either way, if you want to be sure to catch the Demon restored to all of its glory, go check out California’s Great America Halloween Haunt sometime over the next month. You can find all the details on Haunt and the new Demon, including hours, at the California’s Great America website here. And again, a huge thank you to the park for letting us get this unique view of one of the classic rides of Great America! I’m crossing my fingers lots of these improvements stick with it past Halloween!