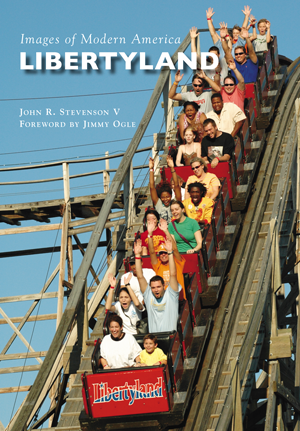 Coaster101.com founder and native Memphian John Stevenson has a long history with the since-shuttered theme park, and is the author of the new book, Libertyland: Images of Modern America, which will be released on September 25. Recently, I had the opportunity to talk to John about his history with the park and his creative process in turning the idea of a book on Libertyland to reality. 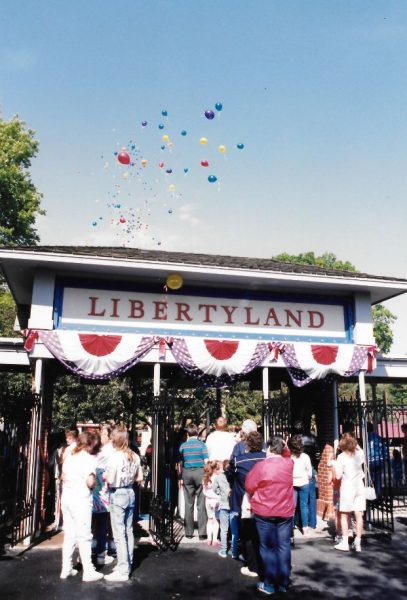 C101: What is your personal history with Libertyland?

John Stevenson: Libertyland was the first amusement park I ever visited. I was five years old and I don’t remember much about it. I do remember much about my first ride on the Zippin Pippin. I remember looking at the backs of the riders in front of me. It was a very cool, strange, scary experience. A ride on Zippin Pippin was scary for anyone, because it always felt like it was going to collapse at any moment.

I went to the park periodically throughout my childhood and unfortunately didn’t go as much as I would have if I had a car and could take myself. Zippin Pippin was my first roller coaster, and the Revolution was my first looping coaster. The park held a very special place in my heart and was one of the main reasons I became so interested in roller coasters.

In 2005, November 4 I believe, the Mid-South Fair board of directors (the Fair owned Libertyland) voted to close the park, citing financial losses. They wanted to expand the midway of the fair, which never happened. The Fair moved to Mississippi.

And then I got involved with Save Libertyland. 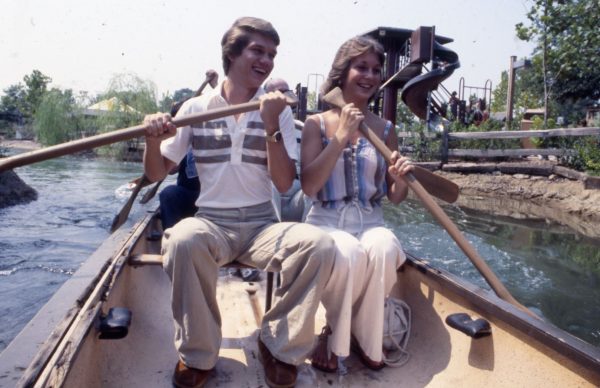 C101: What is “Save Libertyland” and when did you get involved with it?

JS: Save Libertyland was formed almost immediately after it was announced that the park was closing. It was a grassroots effort. They were locals, politicians, fans of the park who banded together to save and reopen the park. They were having rallies, I was on a radio show – I don’t remember how I got connected with it – but I got as involved as a 13 year old could.

We made some progress. Without a doubt, we delayed the auction of the park. We stopped the Zippin Pippin and Carousel from being auctioned off, because we were able to determine that the city owned those two rides, which had been part of the Fairgrounds Amusement Park before Libertyland opened. Eventually, the Zippin Pippin was auctioned off, and the carousel was placed in storage. It will reopen this year at the Children’s Museum of Memphis. 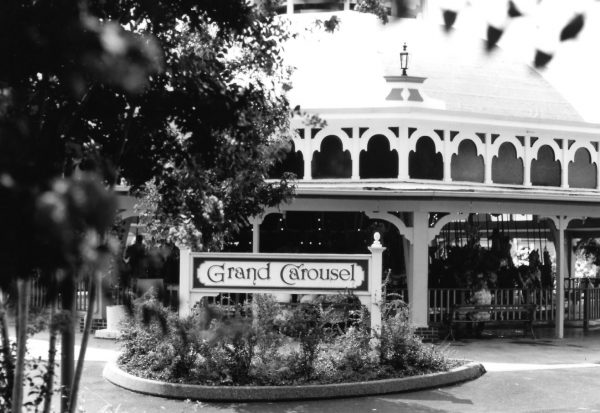 C101: And you were also behind “Remember Libertyland.” Tell us a little about that.

JS: There’s an organization called Remember Libertyland, which Save Libertyland eventually morphed into, because obviously there was nothing left of Libertyland to save. They organized the placement of a historical marker on the fairgrounds, which was great. In June of 2006, right after the auction of the park, I started www.rememberlibertyland.com, which at that time was kind of a sub-site of Coaster101 until it grew and became its own website.

It’s a hub for any news related to the park and things like old pictures. I then started a Facebook page and Twitter account for Remember Libertyland. They’ve become a huge asset for the book and keeping the memories alive. That’s the book’s main purpose – to remember the park. With each generation, it becomes easier and easier for people to say “What’s Libertyland?” 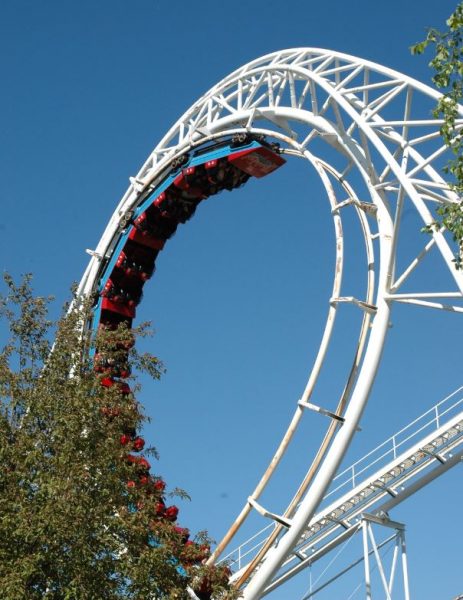 C101: You went from Save Libertyland to Remember Libertyland. How did Libertyland: Images of Modern America come about?

JS: I was living in Chicago for a summer internship three years ago when I was contacted by the Arcadia publisher asking me if I wanted to write this book as part of the Images of Modern America series. I was in the middle of grad school and would soon be returning home to Memphis to look for a full time job. The timing wasn’t right.

Fast forward two years later. I had just graduated from grad school, I had a steady job and felt like it was the right time. I reached out to Arcadia and told them that I was interested in writing the book. I completed the proposal and the book was approved. And the rest is history. 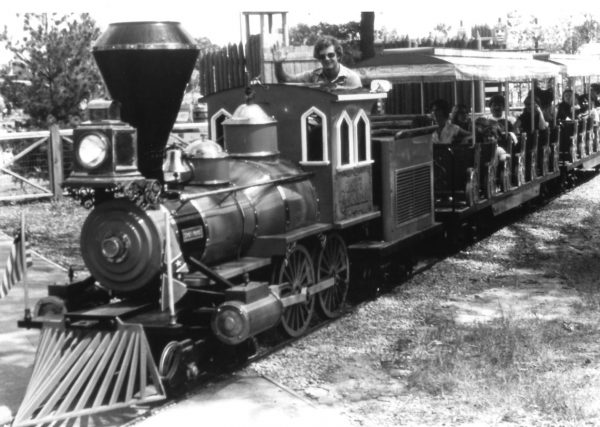 C101: What was your research process for this book like? How did you curate all of the information?

JS: Because it’s a photo-based book, I began by soliciting photographs. It was tough not living in Memphis, because I had to rely on my parents to do some of the groundwork for me, people to scan things for me. That was the first phase.

Once I started getting photos, I shifted to research. Over my Christmas break, I went home to Memphis. With libraries, it’s hard to do that type of research from afar. A lot of the files aren’t digitized, so you have to be there. I spent an entire day in the libraries of Memphis pulling articles, frantically taking photographs of all the articles themselves, and scanning the images that I thought could be used. The images had to be a certain format, a certain size, a certain file type.

Next, I began talking with historians. One individual in particular, John Dulaney, was invaluable to me. He was incredibly knowledgeable about Memphis history, especially the fairgrounds, and  was definitely one of the main assets I had. The entire process was very much a community effort. 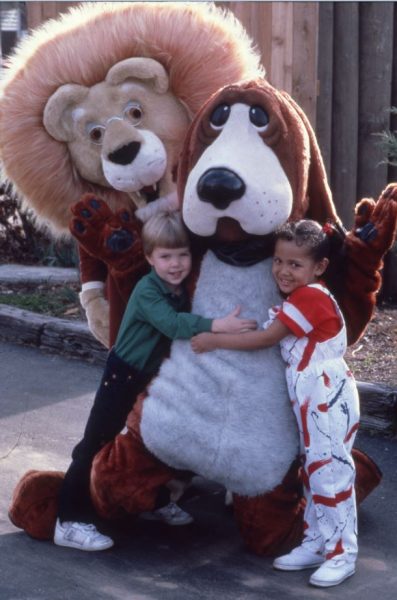 C101: How did you get linked up with John Dulaney?

JS: His name was given to me very early in the process, and it actually got lost in my notes. I came across his name probably in December or January. Once I found his name, I reached out to him. I think he’s retired. He would spend all day researching and sending me stuff. Honestly, his name needs to be on the front of the book. 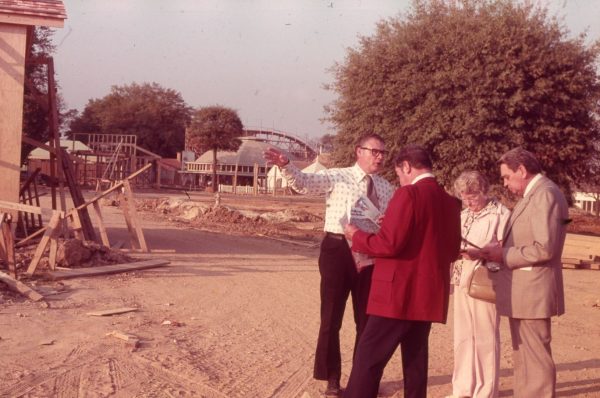 C101: When all was said and done, do you remember how many pictures and articles you had to have combed through?

JS: That was one of the hardest parts of the book because you have so many images, and some of them are personal photos that people sent me. So I had this obligation that I wanted to tell their stories, and they took the effort to send me their photos. It was incredibly hard. Then you have the professional photos that were taken by the park that I was able to get my hands on. I had to remind myself that while I’m first and foremost a roller coaster enthusiast, many of the people who will be reading this book are not. So I had to keep in mind that people would want to see pictures of the shows, the history, the people who work there, the games, the other rides. I tried to balance it as much as I could. 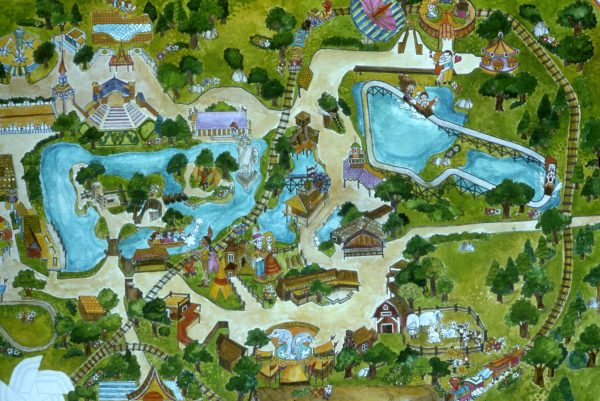 C101: What was your creative process like when you were putting the book together? How often were you working on it?

JS: I think the first thing that I did was figure out how I wanted to organize the book. For me, it was like writing a paper, you start with an outline and go from there. I decided I wanted the book to be in chronological order. I started dividing it up. I wanted the first chapter to focus on the fairgrounds, because the Fairgrounds Amusement Park that preceded Libertyland, you had to have that story, because that’s how the Zippin Pippin and Carousel (both built in 1923) came to be, and you had to introduce them. From there, I broke it down and went into the construction and design phases, and then the opening, then the closing, etc.

Thanks to my insomnia, a lot of the book was written in the very early morning hours. A lot on the weekends. Sometimes I’d write on lunch breaks if I had a creative inspiration or just felt like writing. Sometimes I would jot down something, sometimes I would be going to sleep and jot down a note I thought of. It was on my mind all the time.

C101: Once you got the okay to do the book, from the first picture or word on paper to a completed final draft, what was the time frame? 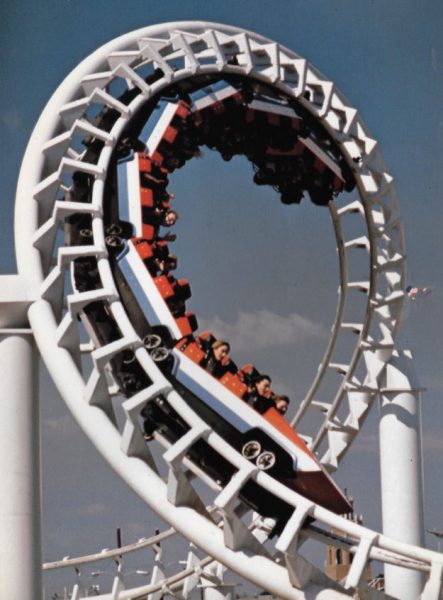 C101: What do you personally miss most about Libertyland?

JS: The charm of the park. If you take any one piece of Libertyland and look at it on its own, rides-wise, nothing’s that great. Zippin Pippin’s historical significance, Revolution was a standard loop/screw Arrow, nothing exciting. Together, when you added in the quaint buildings and the lakes, and the different themed areas, the very Americana-style buildings and the atmosphere, and the trees, it all came together to make this great park. Even though you were very much still in Memphis, you could escape for a moment. And that’s by far what I miss, just the experience. Libertyland as a whole. Not just one small piece. And I just miss Memphis having an amusement park.

C101: What do you hope people take away most from your book?

JS: I hope that people learn more about Libertyland. I thought that I knew a lot about the park going into this project, and I was very mistaken. I just hope that people use it as a way to educate others what Libertyland was. With each generation it gets harder and harder. I hope people enjoy it, I hope it brings back good memories. I hope it connects people. Maybe people who worked at the park. 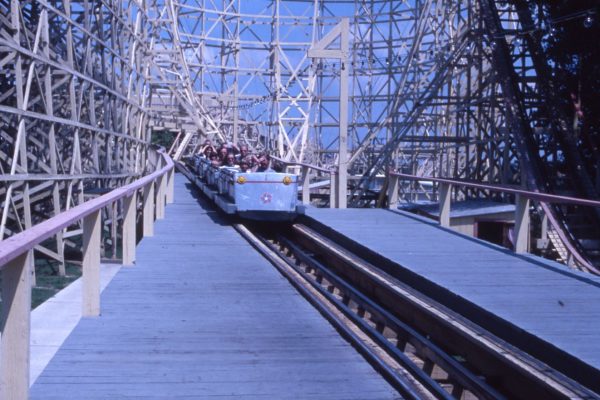 C101: What was something you learned specifically about Libertyland that you didn’t know before writing the book?

JS: I learned that the original design for the park was drastically different from what eventually it became to be. It was very much a grid-like layout. There was a monorail that was going to circle the fairgrounds. There was going to be this giant building in the middle of it called the Historama, which inside was going to have this historical model display illustrating the history of America. It was incredibly different from the Libertyland that was actually built.

JS: Right now, it’s a field with trees. There’s a disc golf course there, the Libertyland Disc Golf course. I’m so glad they went with that name. The Fairgrounds are being redeveloped and the city is trying to determine the best use for that space. They tossed around the idea of it being a sporting complex. That’s been debated, because they’re not sure the demand exists. But in the most recent rendering, there’s a lake on the site with a walking trail around it. I think a lake is a very fitting replacement. But there hasn’t been anything set in stone, and there probably won’t be for quite some time. 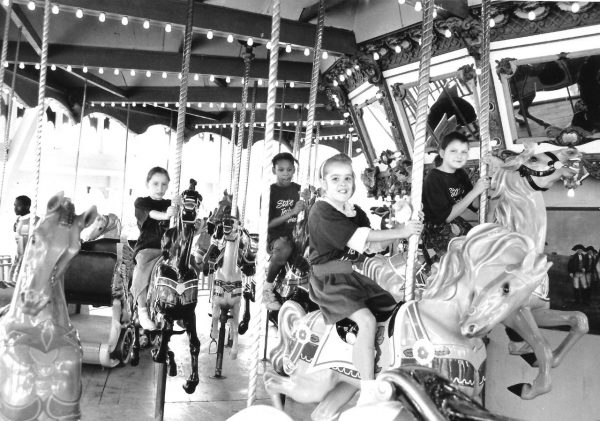 C101: Anything else you want the Coaster101 audience to know?

JS: If anyone finds the book and reads it, and has Libertyland stories to tell, please email me. There are so many people who were touched by Libertyland.

It’s crazy that this small amusement park had such an impact on people’s lives. There were people who got married after working at Libertyland together. Careers were launched there. It really was a special place.

You can order Libertyland: Images of Modern America here. For more information, be sure to check out www.rememberlibertyland.com.

Thanks to John for his time, and also for letting me crash on his couch the night of this interview.