My Final Rides on Dueling Dragons

I last visited Islands of Adventure in 2006 — I spent a couple of hours at the park after a long day at the neighboring Universal Studios Florida. The visit consisted of a lap around the lagoon with a couple of rides on Incredible Hulk. I passed on Dueling Dragons, which was renamed “Dragon Challenge” in 2010 to coincide with the opening of the Wizarding World of Harry Potter.

To this day, I regret that decision to skip a ride on the Dragons. So I was understandably devastated when Universal announced that the legendary (once) dueling Bolliger & Mabillard (B&M) inverted coasters would close forever on September 4, 2017.

After wrestling with my regret, I decided to make a last-minute trip to Universal Orlando this past weekend for what would be my first and last rides on Dueling Dragons. 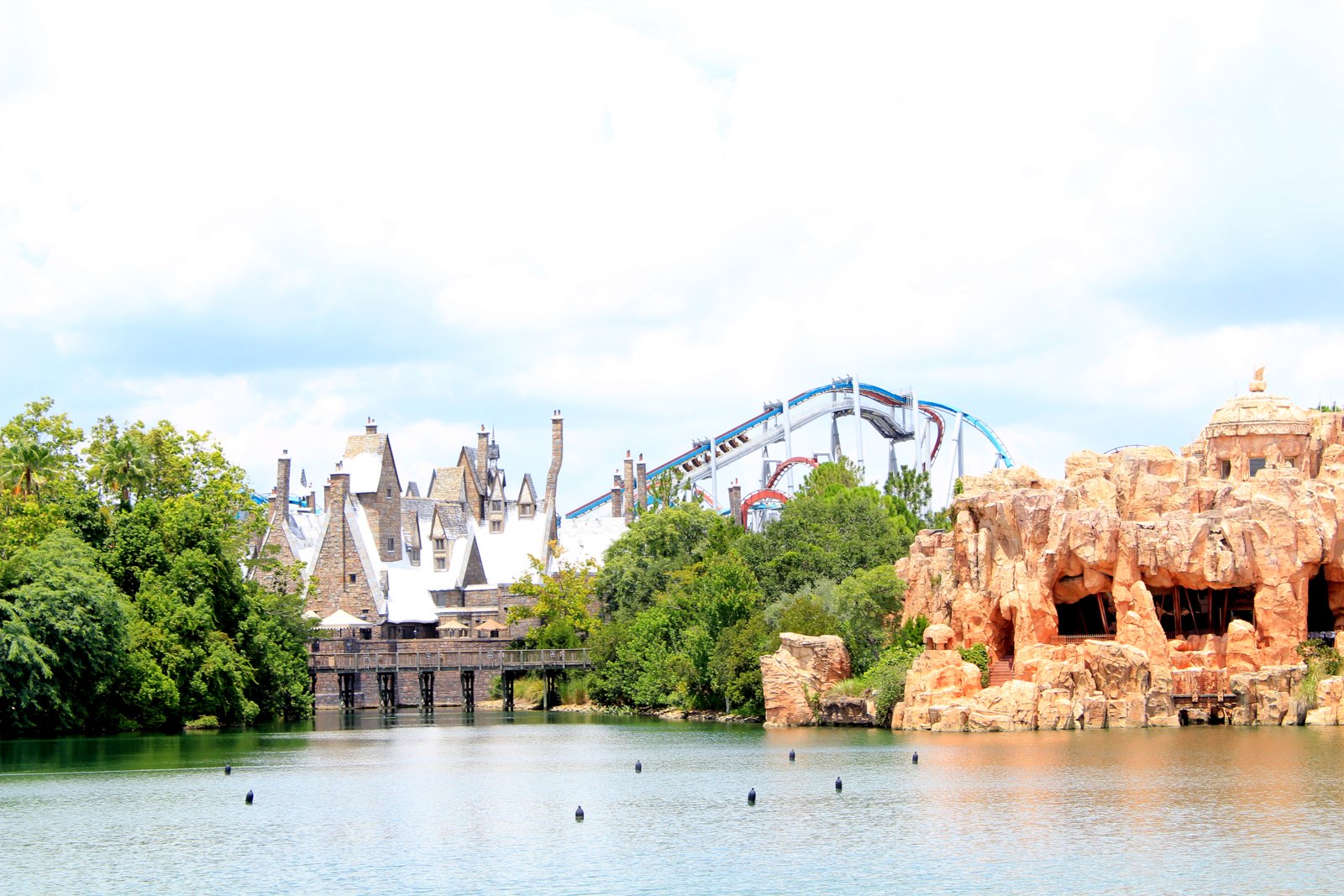 The two coasters aren’t very imposing from afar, and closeup views of their twisted layouts are limited to only a few vantage points. But I think this makes the two coasters more alluring.

I was amazed by the attention to detail of the Hogsmeade area, but my focus quickly shifted to the Dragons. 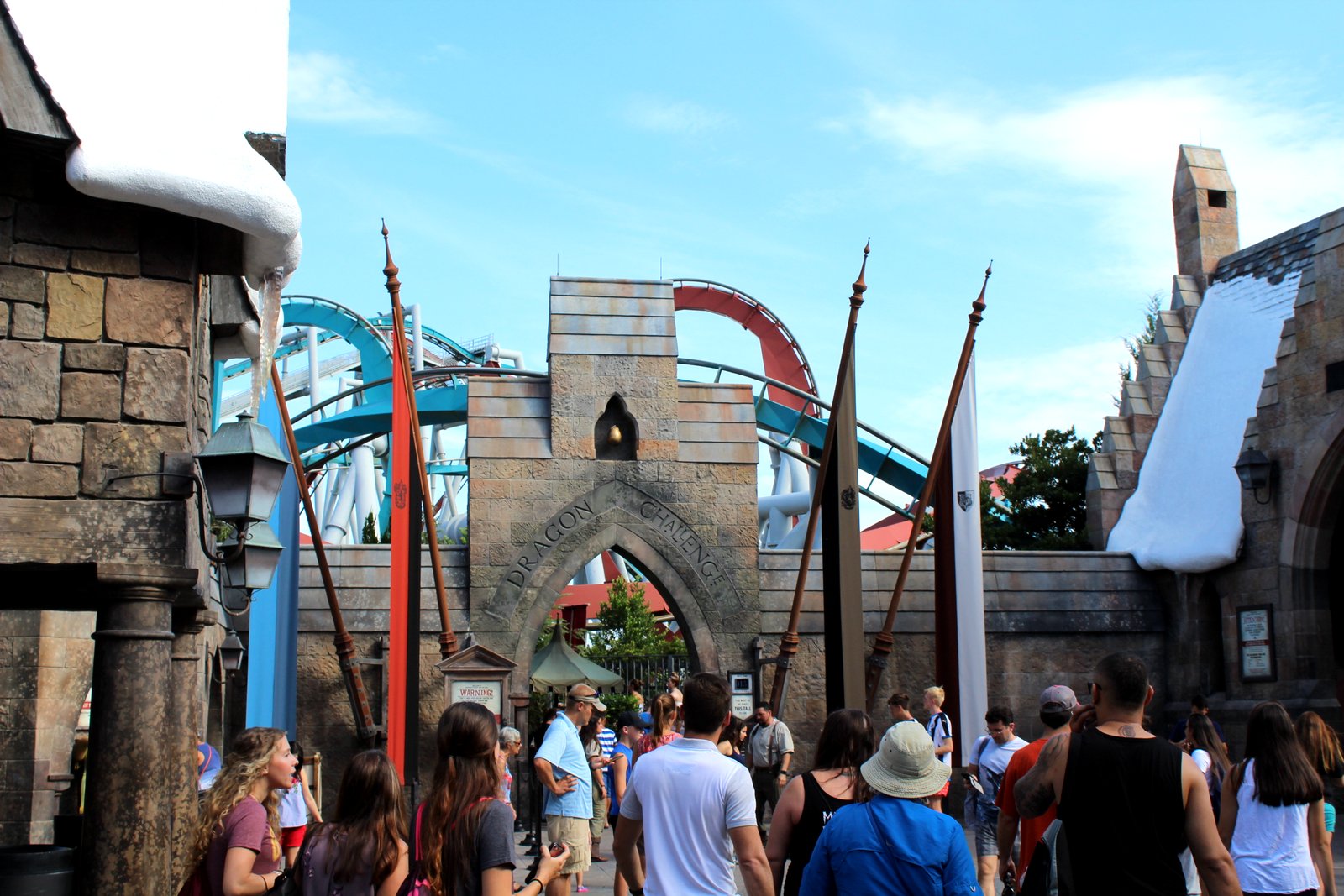 The coasters’ entrance had been rebuilt to match the surrounding castle-like, gothic-era architecture of the Hogsmeade area. 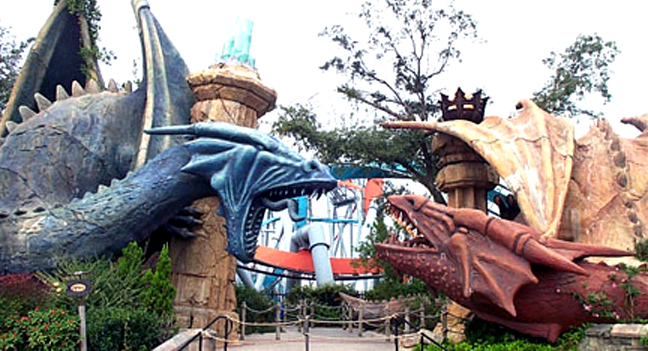 The original entrance was much more breathtaking, with guests passing under two dragons frozen in battle.

I knew that the Dragons queue was long, but I was still surprised at its length as I walked toward the station. However, the outdoor portion was beautifully landscaped, and the indoor section was air conditioned. Considering the Florida heat, I didn’t mind the shade or the AC. 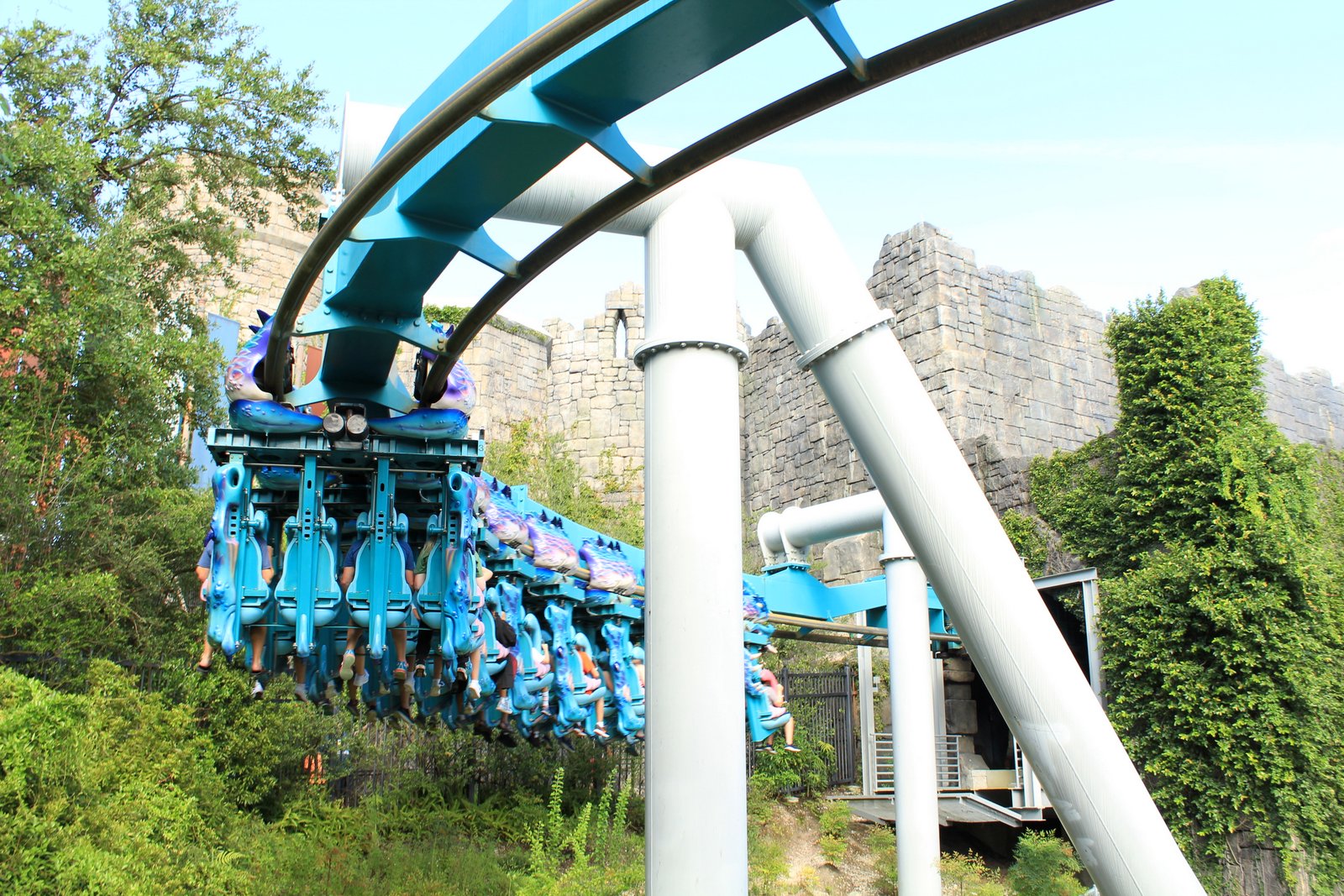 I also liked how the greenery had grown up around the queue and station. And the swampy land underneath the coasters’ twisted layout seemed fitting. 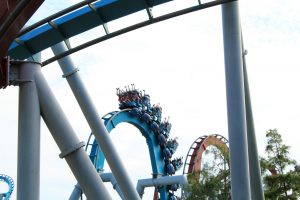 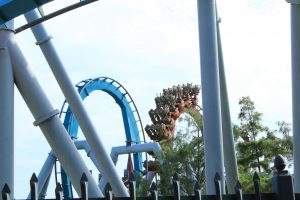 I heard a rumor that the two coasters may duel again for their final weeks of operation (they had stopped dueling in 2011 after injuries from loose objects injuring riders). But as of August 12, that sadly was not the case.

So I used my limited set of Photoshop skills to merge two photos to create the allusion that the two coasters were dueling once again:

Hey, a guy can dream. 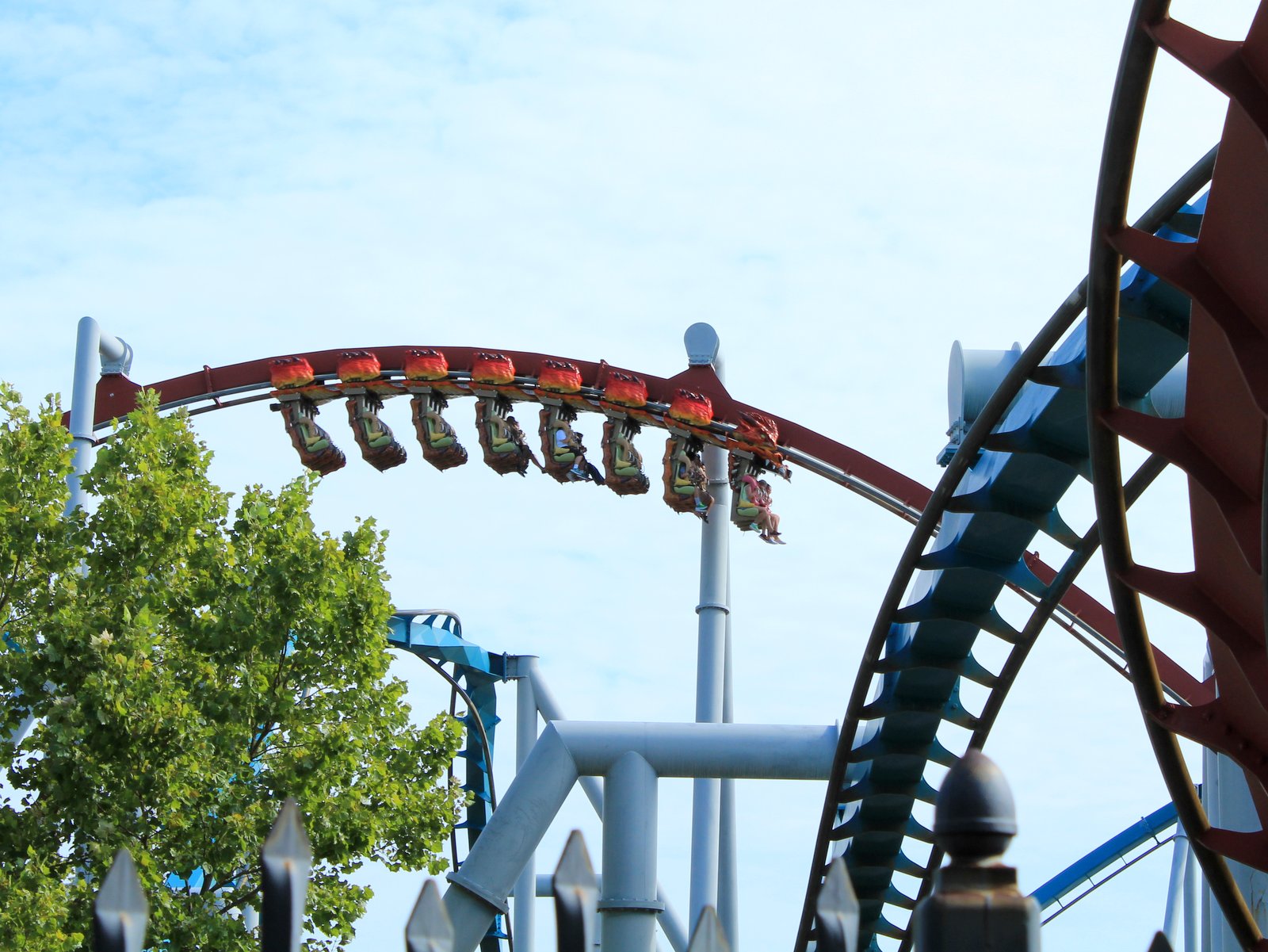 But dueling aside, the coasters are still stellar on their own. Perhaps not at the top of my list of favorite B&M inverts, but still forceful and well paced. 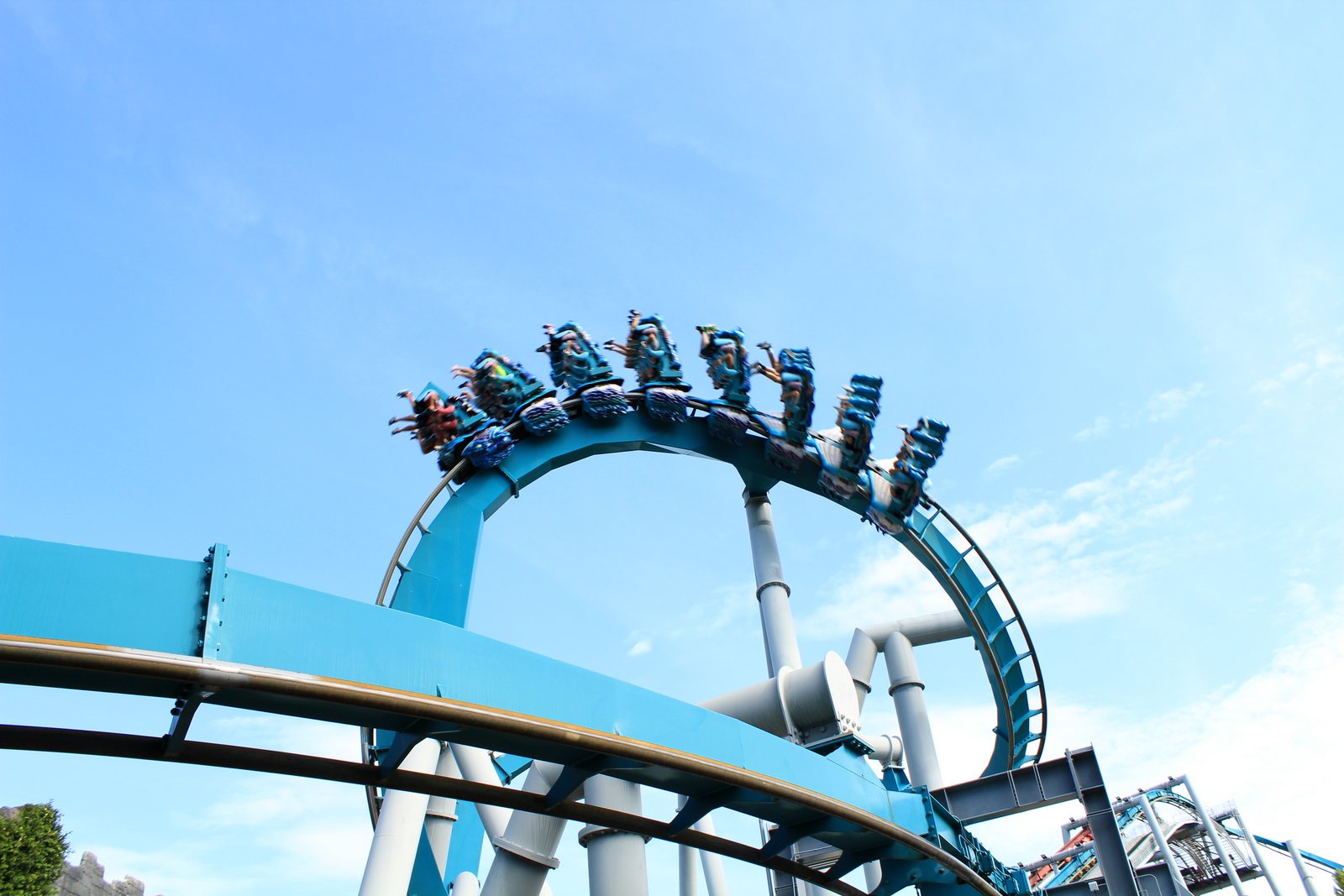 Although the two coasters are similar in their height, speed and length, they offer wildly different rides each with a few unique elements. 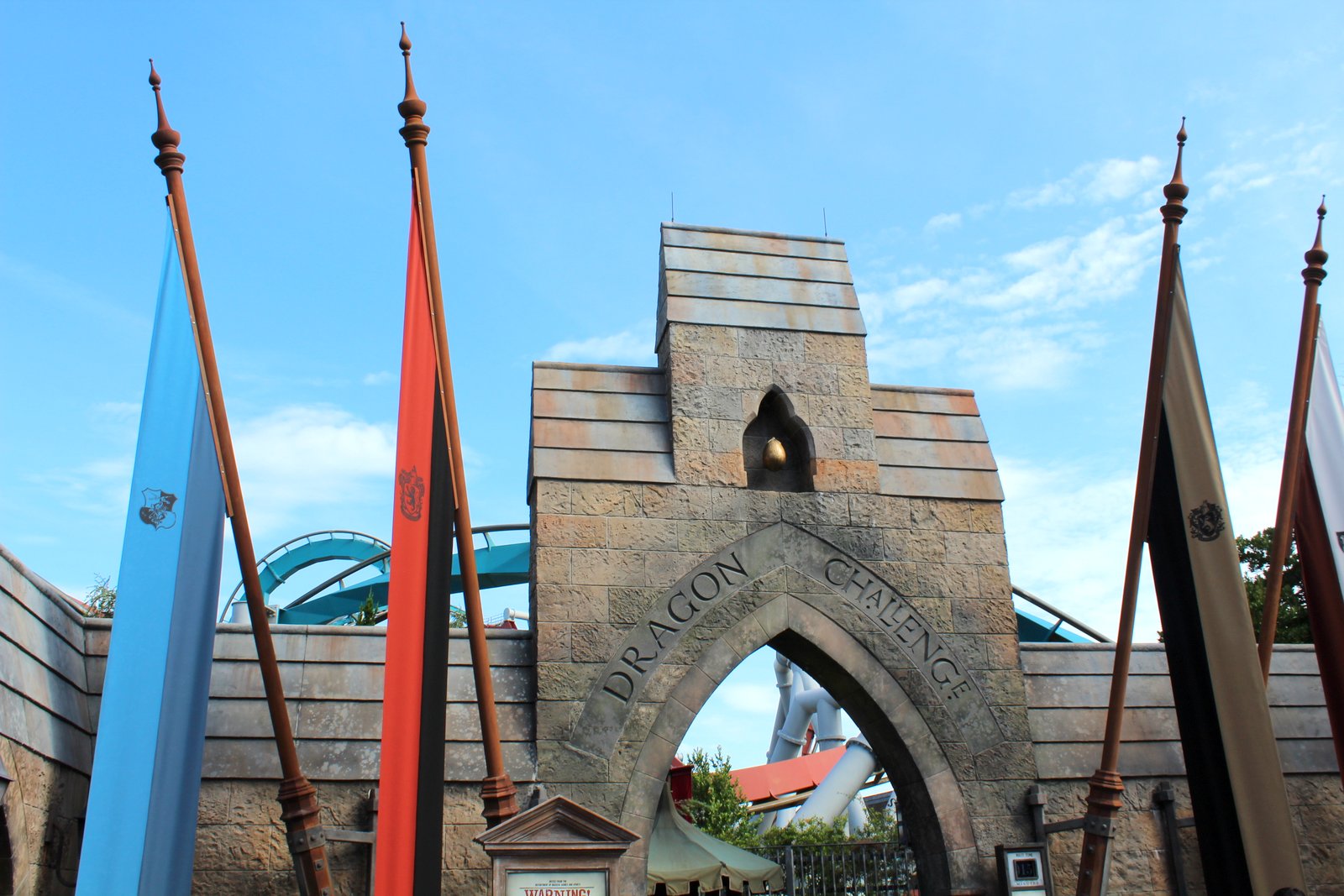 So now, bear with me for this long story of…

My Final Rides on Dueling Dragons (or Dragon Challenge)

They later reopened, but I could tell from the radar that more storms were lining up to barrel through the area. I sprint-walked back to Hogsmeade, bound and determined to ride the coasters at least once more.

I raced through the winding queue, using my Universal Express pass to get me as close to the station as soon as possible.

The sky darkened. But the trains continued to dispatch. I was cautiously optimistic.

I was next in line to board the train when the dreaded “closed for inclement weather” announcement was made. I felt like my heart had been crushed into oblivion. With the park closing in two hours and the storms forecast to last well into the night, the odds were stacked against me.

As my phone (my connection to the outside world) was stashed in a locker, I decided to exit the station and find shelter outside of the coaster’s entrance. I waited and waited and waited. Lightning continued to illuminate the sky. Each strike made me lose another sliver of hope that I would ride these two coasters again.

But at 8:50, with only 10 minutes left to spare, I heard the roar of a cycling train speeding through the twisted course. A small group had congregated in the locker building adjacent to the rides’ entrance. We were all there for the same reason: this would be our last rides on Dragons.

The coaster reopened. I darted through the queue. The Universal Express entrance had been opened to all, allowing me quick access to the station.

I scored one more ride on each side. Very few guests had waited out the storm, so the two rides were nearly silent aside from the roar of the train. Between the darkness of the night and the pelting rain drops, I couldn’t see much. The dark and rainy rides through the night sky seemed fitting for the occasion. 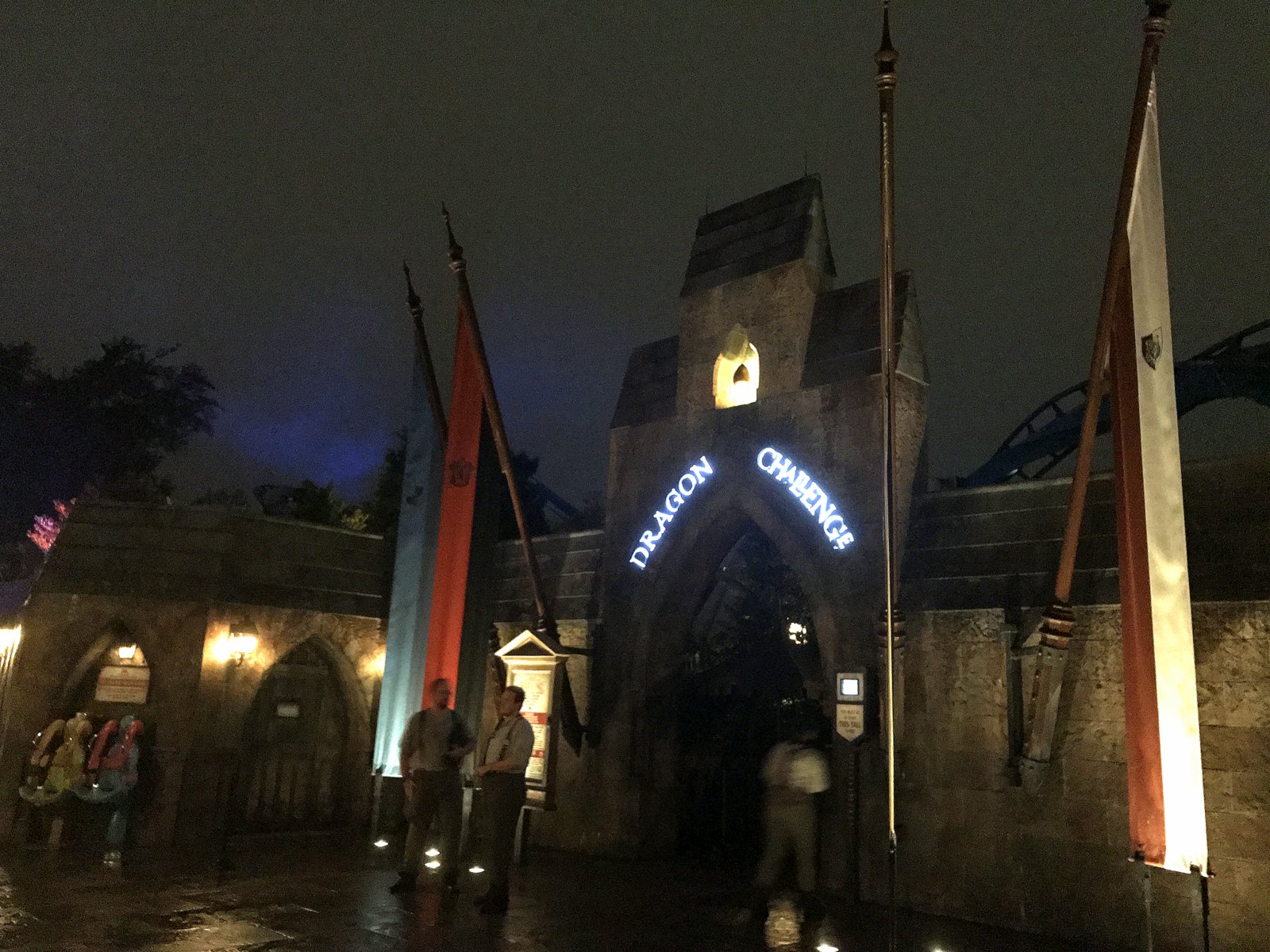 I’ll forever remember those two rides. I have much respect for the Dragons team reopening the coasters so close to the end of the day.

Universal hasn’t announced what exactly will take the place of Dragons in 2019. But whatever it is, it has big shoes to fill. Do dragons wear shoes?

If you aren’t already suffering from nostalgia overload, watch the below clip of a promo showcasing a very young Dueling Dragons:

I’m not sure if we will ever see another pair of dueling B&M inverted coasters. If we do, I doubt it will have the lasting legacy that Dueling Dragons has earned. 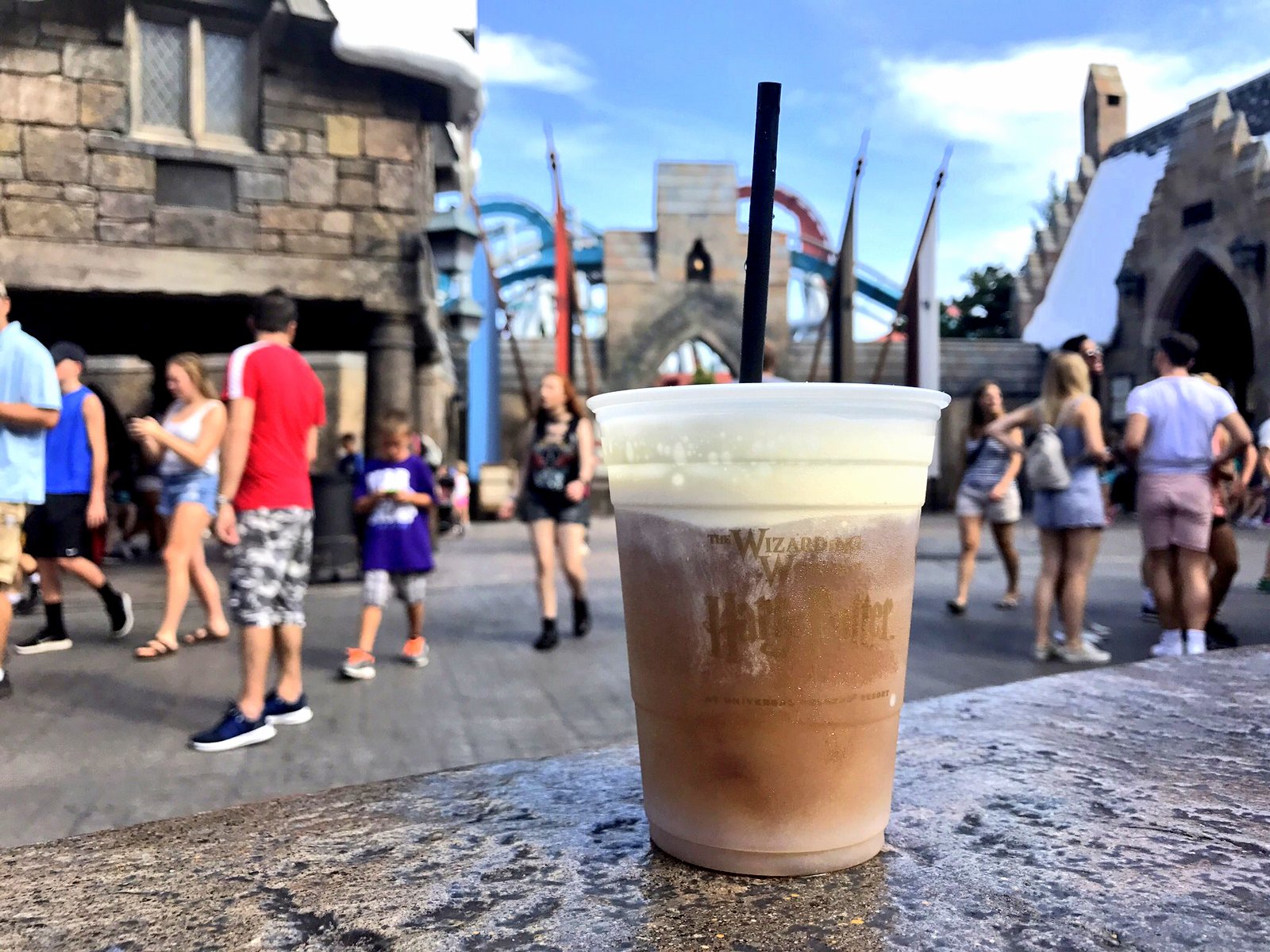 So until September 4, 2017, grab a Butterbeer and take in a few last rides on Dueling Dragons. Perhaps not in that order.

For further reading, I highly recommend Parkepedia’s Dueling Dragons feature that includes an interview with the creative director who helped design the coaster’s elaborate backstory and thematic elements.

Share your memories of Dueling Dragons in the comments section below.