They’re Wild and Unruly. That’s the caption in the latest Cedar Point Mean Streak update video released by the park. Check out the 18 second long drone footage of RMC Mean Streak below:

Just like the last teaser, the snippet is 18 seconds long –  probably another hint the new Mean Streak will open in 2018. And the park is still using the #Theyrecoming hashtag. Many have thought this to mean it will be a dueling coaster, and the footage may trick you into believing this, but I disagree. It will not duel. It will not be a mobius duel like Twisted Colossus either. Though it would be awesome, the elements pictured below will happen less than twenty seconds apart, not enough spacing for two trains to rush past each other. This is immediately before and after the first and second inversions. 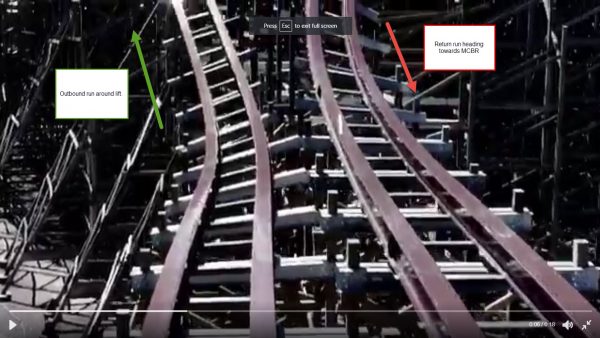 I think the “they’re” refers to the either the ride’s new name or theme. Bandits? Outlaws? Renegades? Facial hair? What else is wild and unruly?

How steep will Mean Streak’s new drop be?

Work has finally started on the first drop itself and it’s shaping up to be pretty insane. The drop looks to be ninety degrees or very close to it.

Who is ready for that 90-degree first drop on the new Mean Streak conversion at @CedarPoint?!?! Ledgers have been installed that show a straight down vertical drop for this impressive project and we cannot wait to try it when it opens! *If it’s not exactly 90….its pretty darn close!* #midwaymayhem #cedarpoint #iheartcp #meanstreak #themepark #rollercoaster #rmcmeanstreak

The more I think about it, the more the general layout reminds me of a larger version of Wicked Cyclone. And the drop on that ride looks steep at 78 degrees, imagine if new Mean Streak’s is ten degrees more! 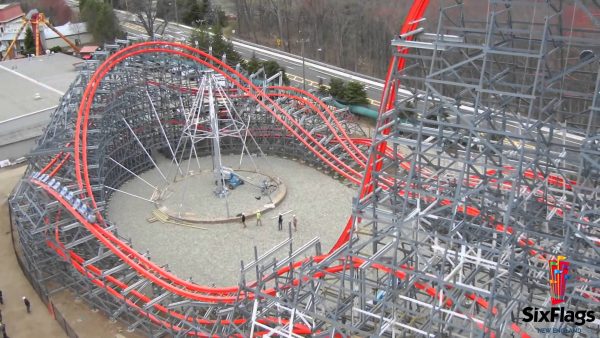 How do you classify new Mean Streak?

The term hybrid has been thrown around a lot lately but I disagree with that term. If this is a hybrid, then so are Gemini and Cedar Creek Mine Ride. Topper track coasters like Outlaw Run and Lightning Rod I would consider hybrids because the rails themselves are a hybrid of wood and steel, but make no doubt, RMC Mean Streak is a steel coaster. The rails are 100% steel. Even the ledgers are steel. Only the supports are made of wood. Coincidentally, Cedar Point may be able to claim the record of the tallest wooden supported roller coaster ever, if it eclipses Son of Beast’s 218′ mark. Which brings us to…

How many records will Cedar Point Mean Streak break?

The original Mean Streak was 5,427 feet long. The longest Rocky Mountain Construction (RMC) redo of a wood coaster with only one lift hill is New Texas Giant at 4,200 feet. Could RMC’s Mean Streak become the longest steel I-box track coaster? If the coaster’s height is extended enough Cedar Point would have an amazing six roller coasters taller than 200 feet. Technically they could claim Valravn, Dragster, Wicked Twister, Maverick, Mean Streak RMC all go at least 90 degrees too. And of course whatever silly marketing records the park comes up with.

I made a quick sketch of the construction progress on Cedar Point Mean Streak. Red is completed track, yellow is completed ledgers, and green is speculation. We’ll see if it makes the complete lap at the end or if it has to shortcut it. Looks like the lift hill height will be extended but the MCBR is roughly the same height as before. 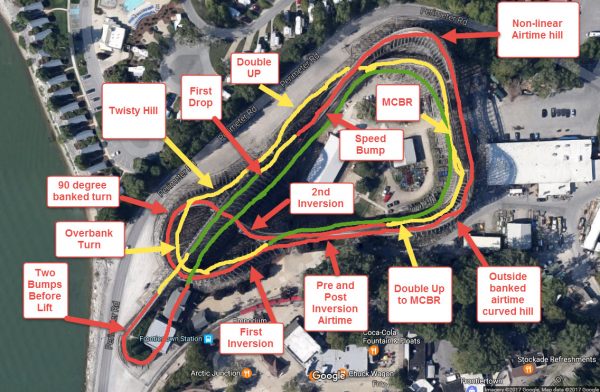 I hope you enjoyed this Cedar Point Mean Streak update! Hopefully we’ll be seeing it in person in a few short weeks and can provide recent construction pictures. Stay tuned!