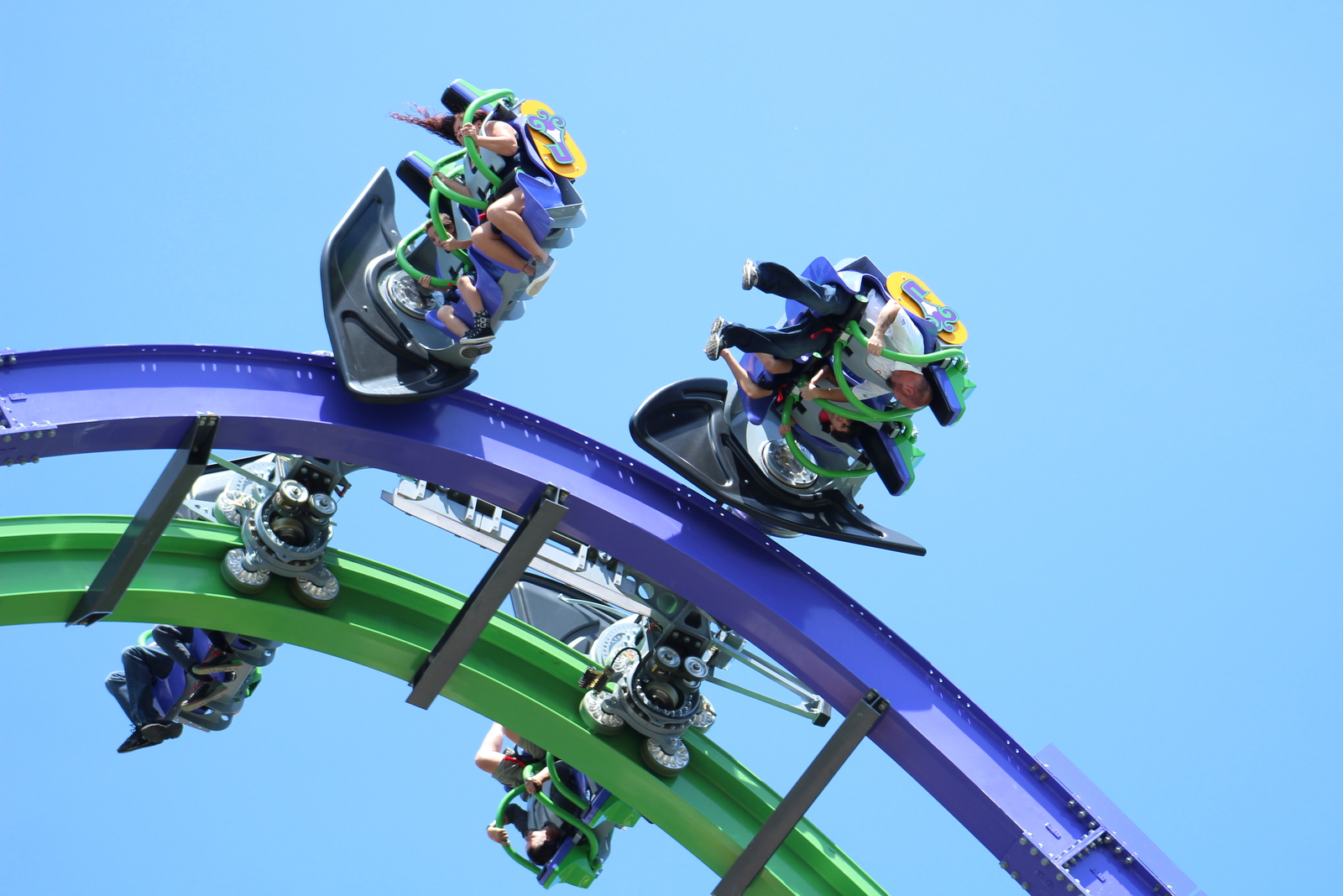 Joker at Six Flags Great America is a 4D “Free Spin” model from S&S Sansei. Each train seats four pairs of riders — two pairs on each side of the track (the purple side and the green side). 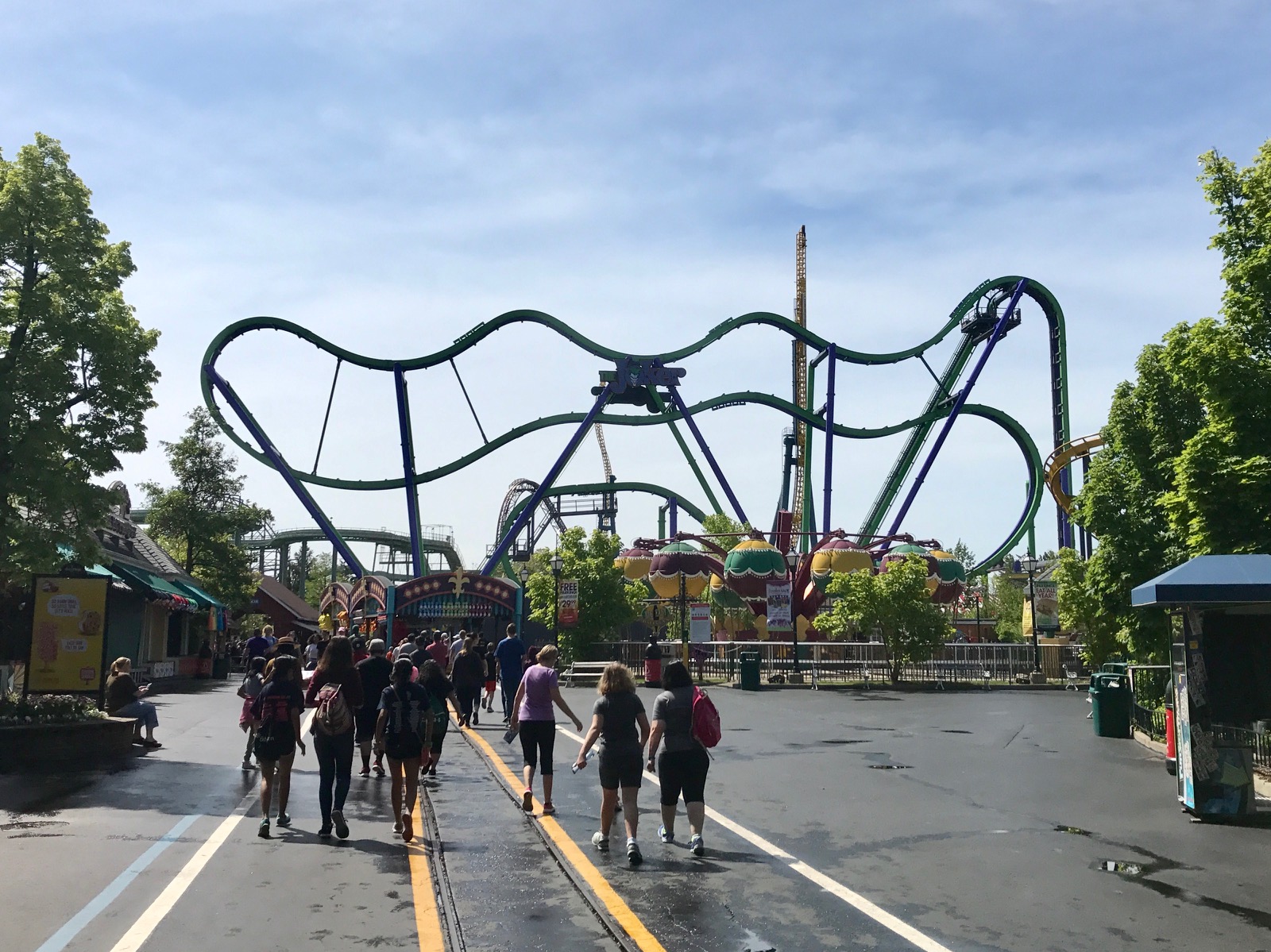 Joker’s 120-foot-tall lift hill towers over the Mardi Gras section of the park, but the ride entrance itself is located in the Yankee Harbor area, not far from Joker’s greatest foil, Batman. 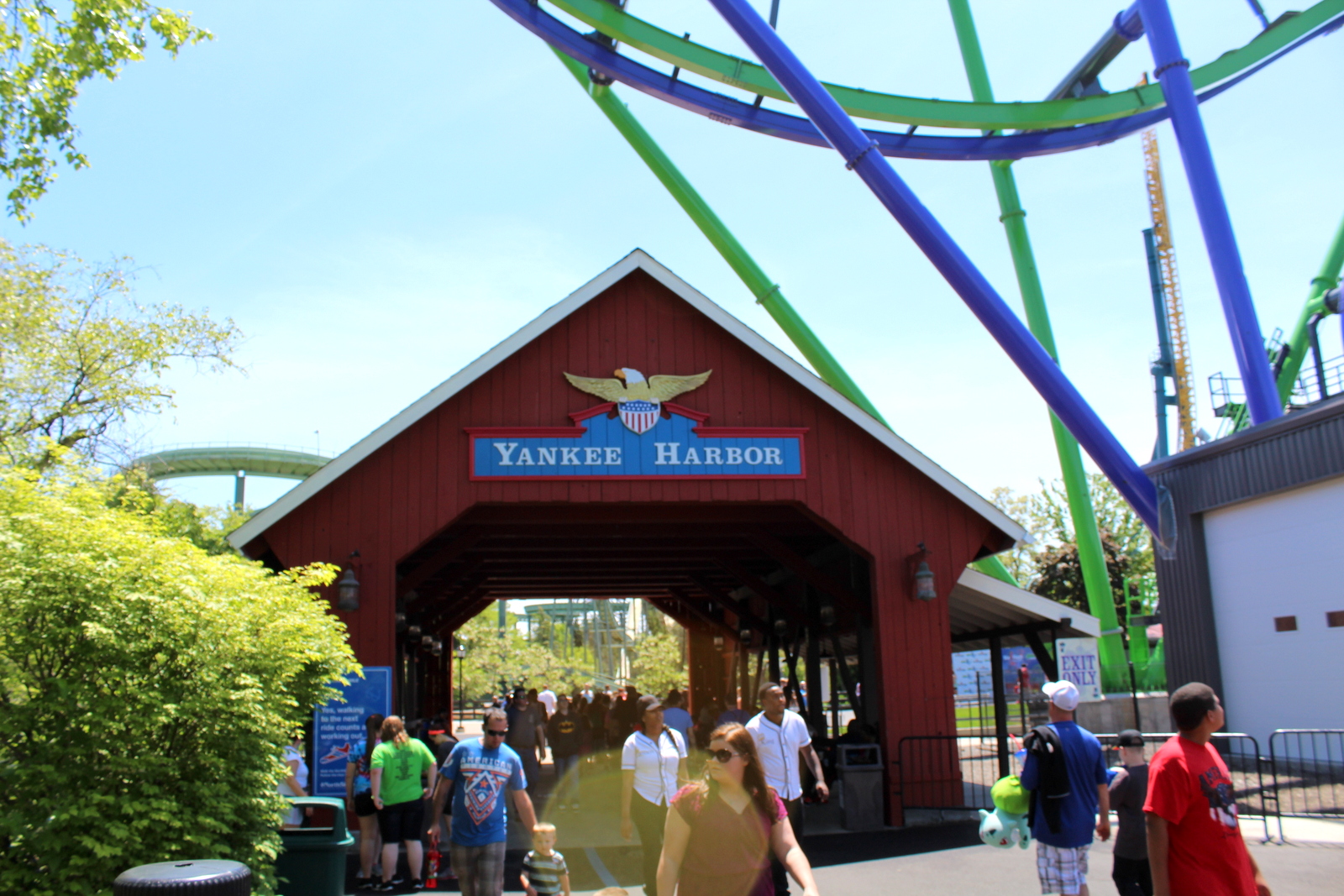 Kudos to Six Flags Great America for saving and reusing the old covered bridge that connected the Mardi Gras and Yankee Harbor areas.

As I arrived at the park before its 10:30 a.m. opening, guests had only been allowed to line up at the entrance to the ride’s queue, which resulted in a line that stretched well into the Mardi Gras area. 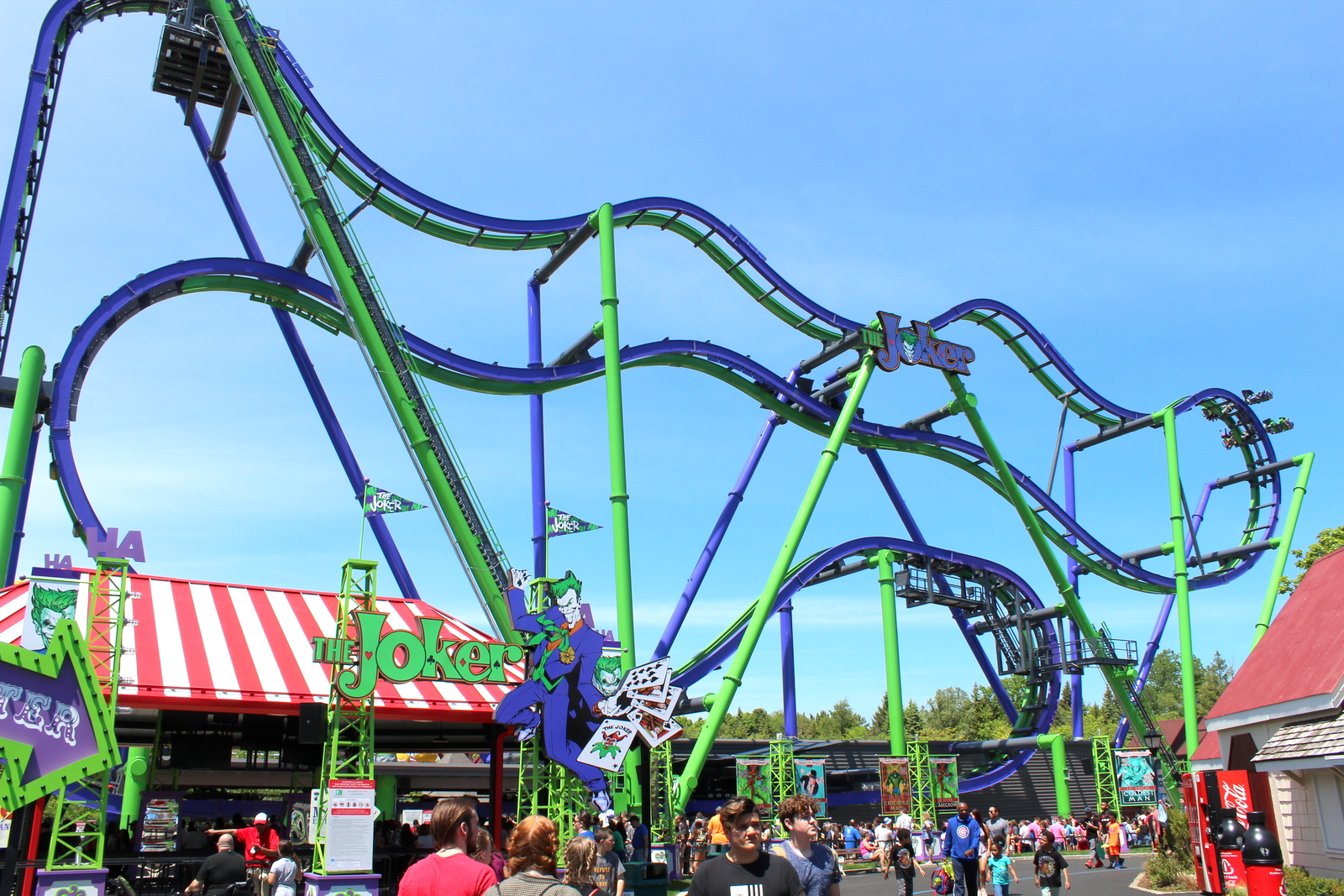 Joker’s queue is relatively simple — a large section of it is housed under a red-and-white striped, circus tent-like awning. However, a large section of switchbacks is (as of this review) exposed to the elements — so pack some sunscreen. 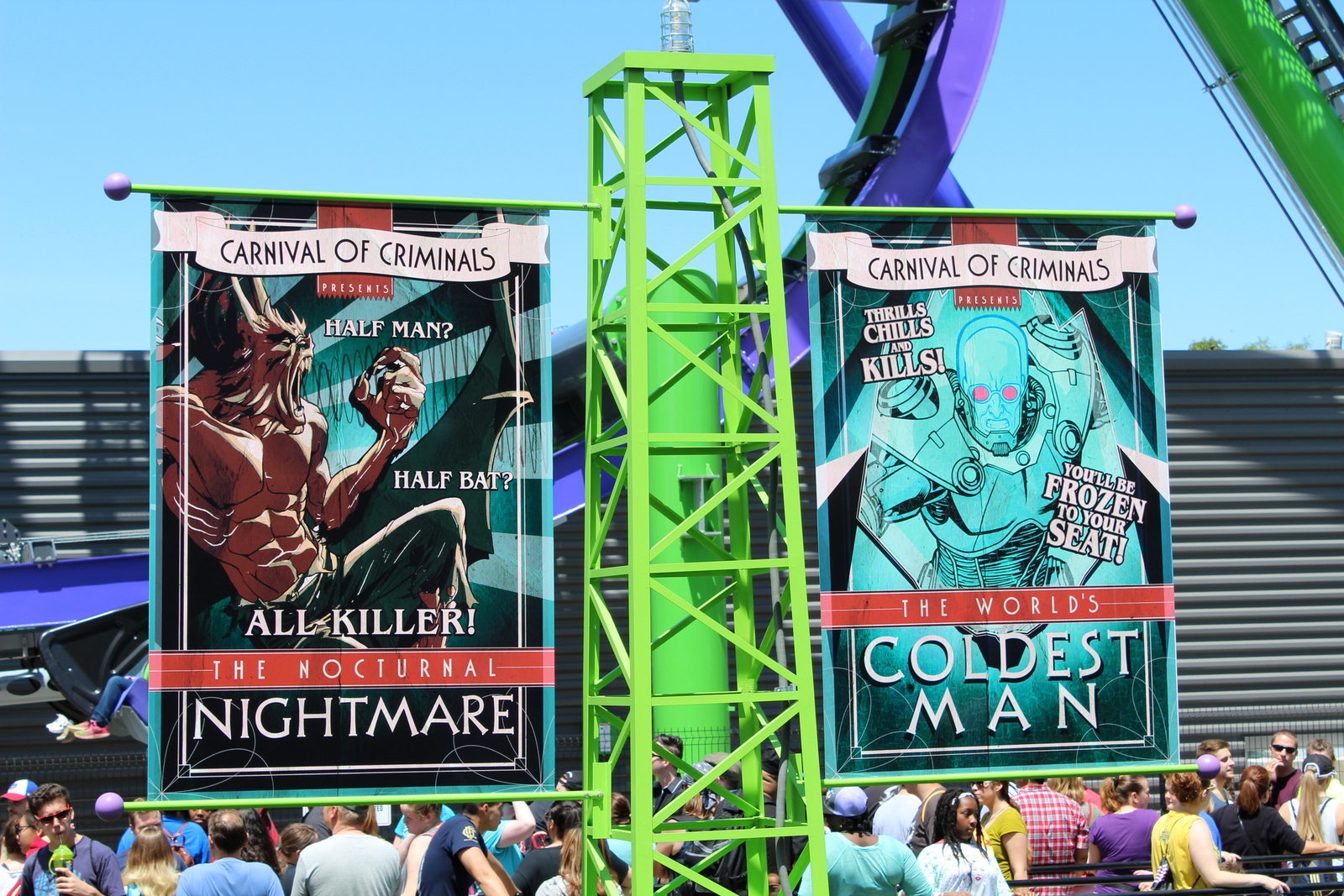 The perimeter of the queue is dotted with banners advertising the “Carnival of Criminals.” I’m a DC Comics nerd, so I always enjoy these. 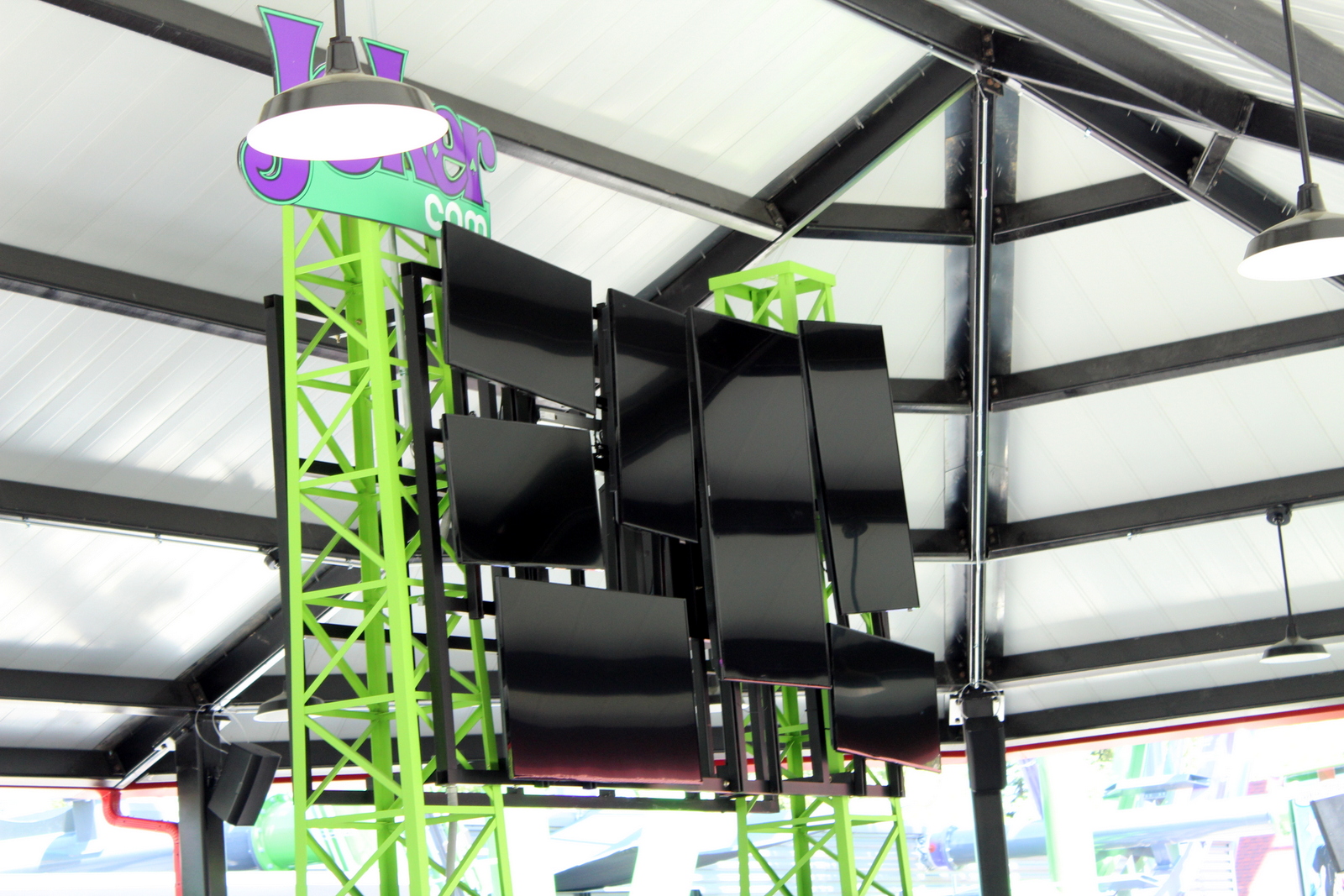 A bizarre assortment of TVs in the middle of the “circus tent” awning is supposed to feature an animated Joker, but the TVs were off (at least when I was around). 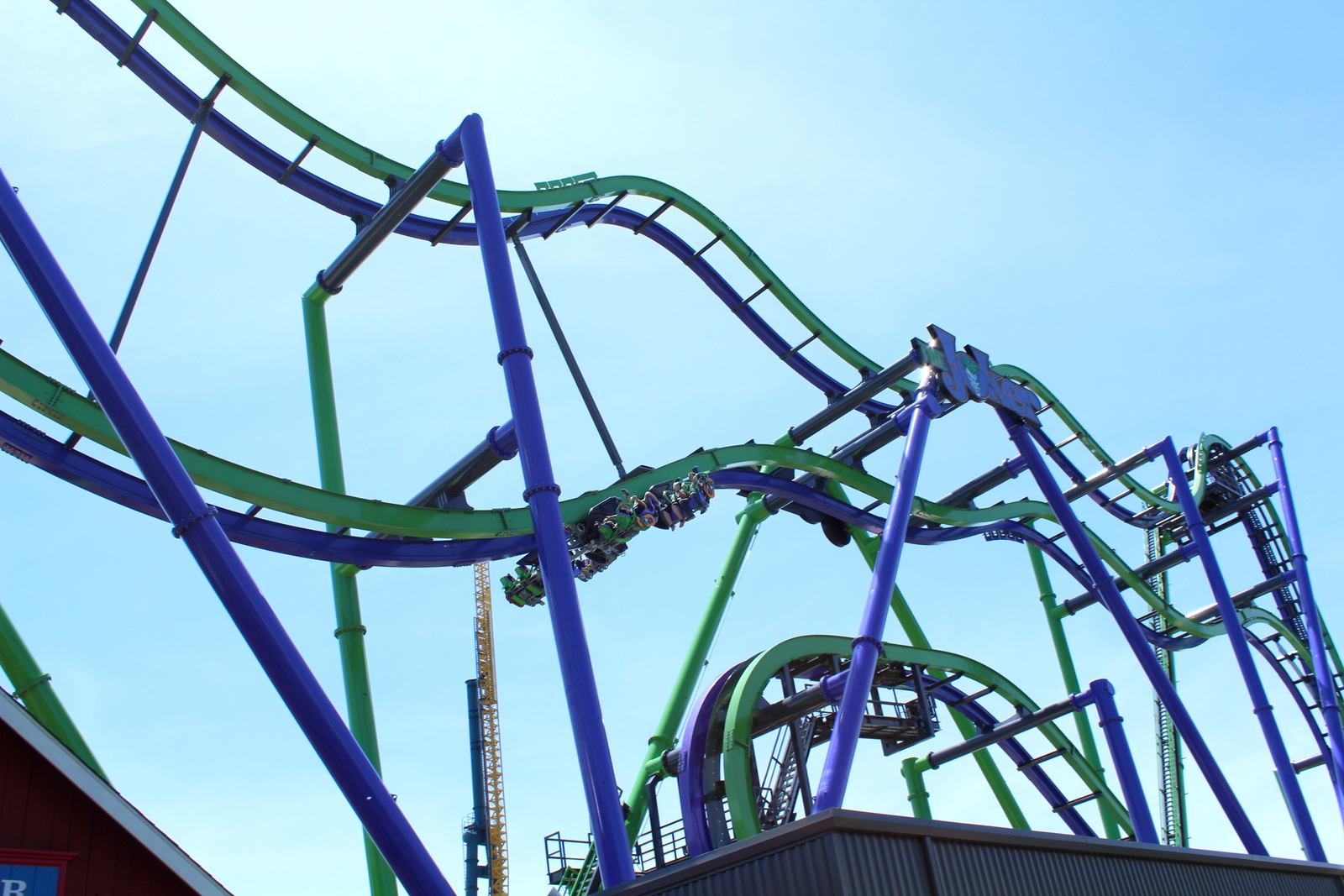 Thankfully, Joker does feature a single rider line, which allowed me to get a few spins (ha) in before the rest of the park became too crowded.

Riders enter the single rider line at the main entrance to the queue — just tell the attendant at the front that you’re a single rider. The point where single riders are assigned to the green or purple side of the track isn’t too far from the station, so it can reduce your wait time significantly if you’re willing to be separated from your group.

The station is rather bare and open, but the load and dispatch process is so quick that you won’t have much time to notice the station or lack thereof. The ride ops were hustlin’ to get trains loaded and out of the station. 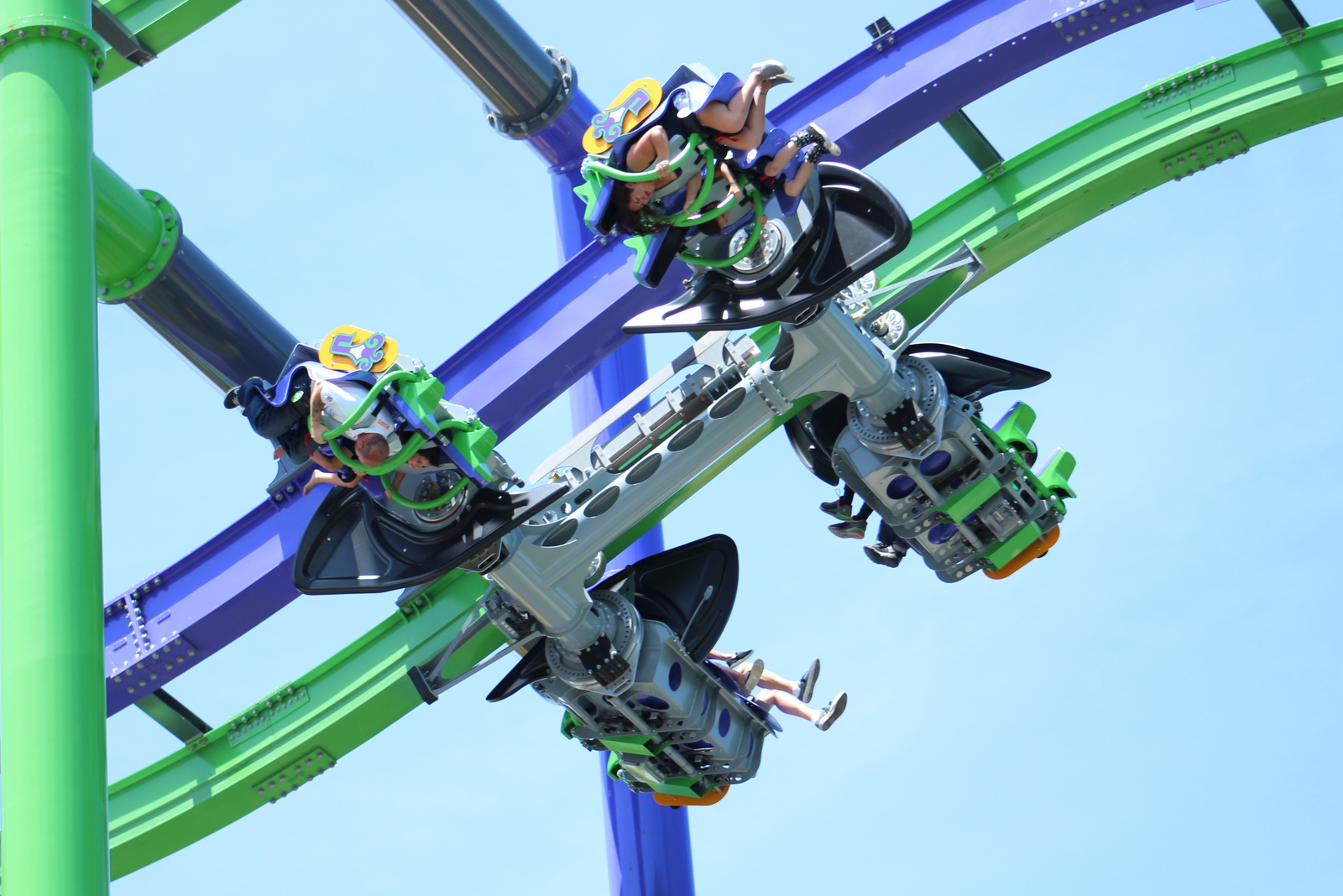 The bucket-like seats feature restraints similar to nearby X-Flight. However, unlike X-Flight, the shoulder straps do not lock in place after the train leaves the station. This makes for a more comfortable (and more out of control) ride experience. 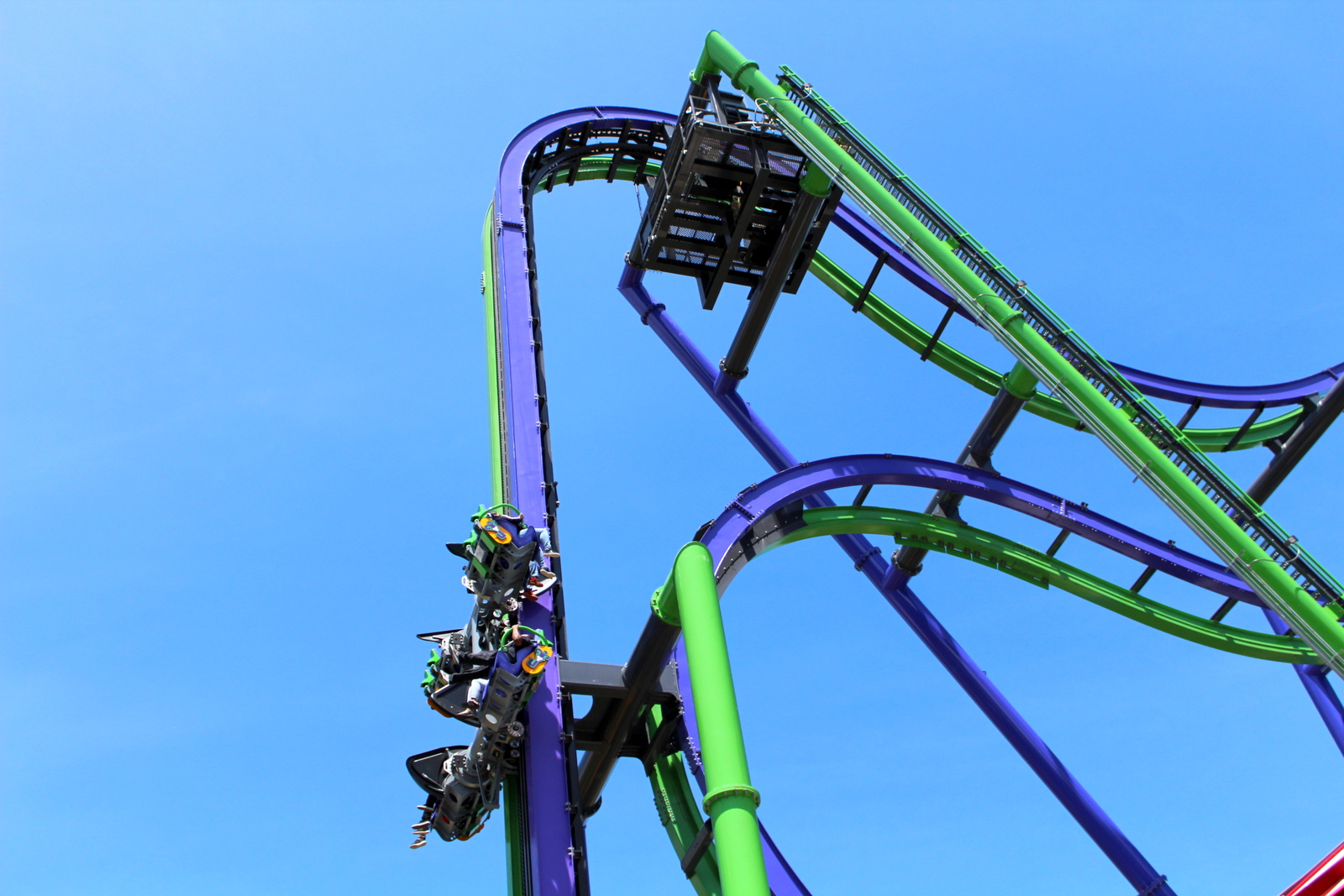 The ascent up the elevator-like lift is quick, but you’ll have enough time to admire the view of the park below. 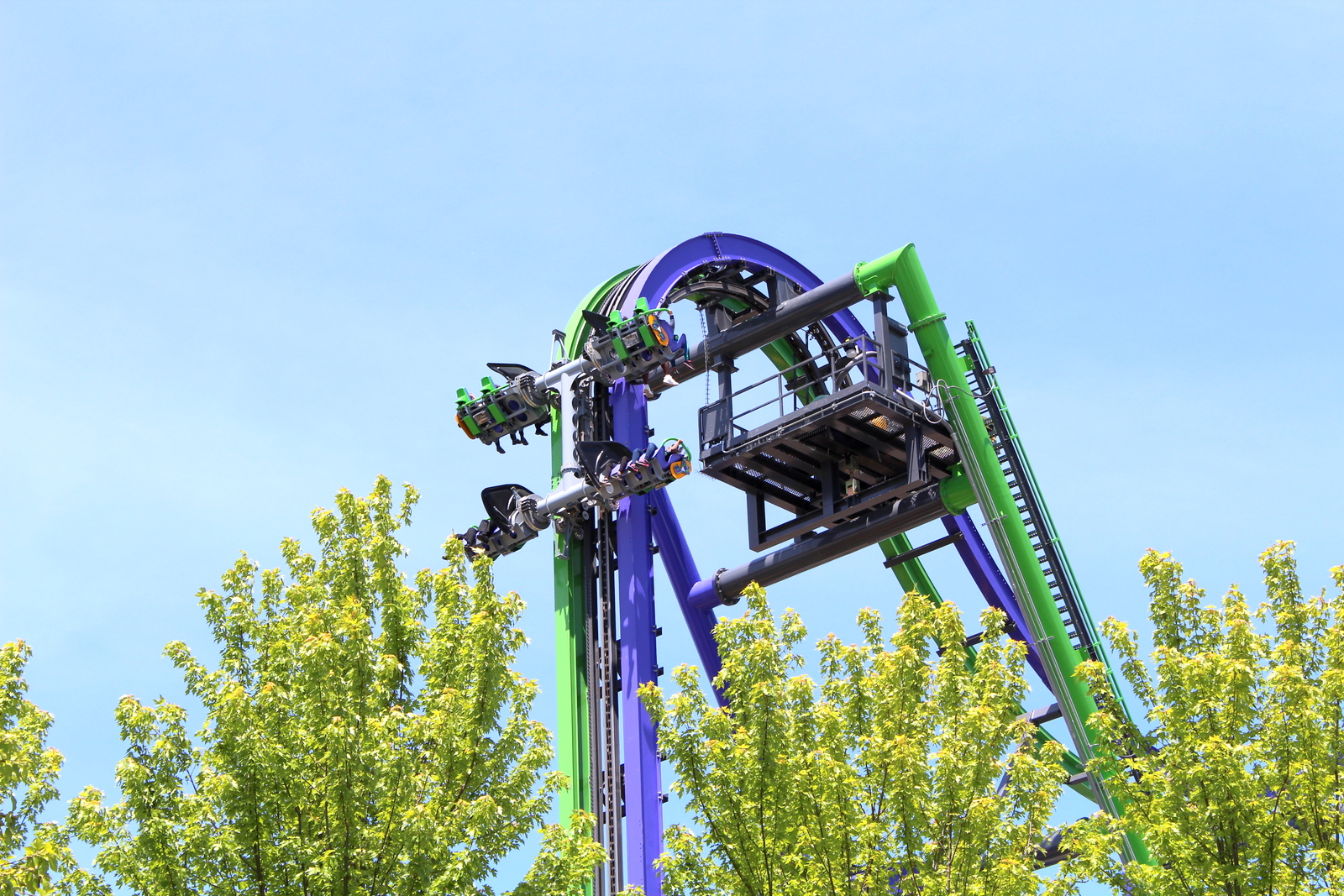 The second row (facing forward in the station) gives a superb view of the park. 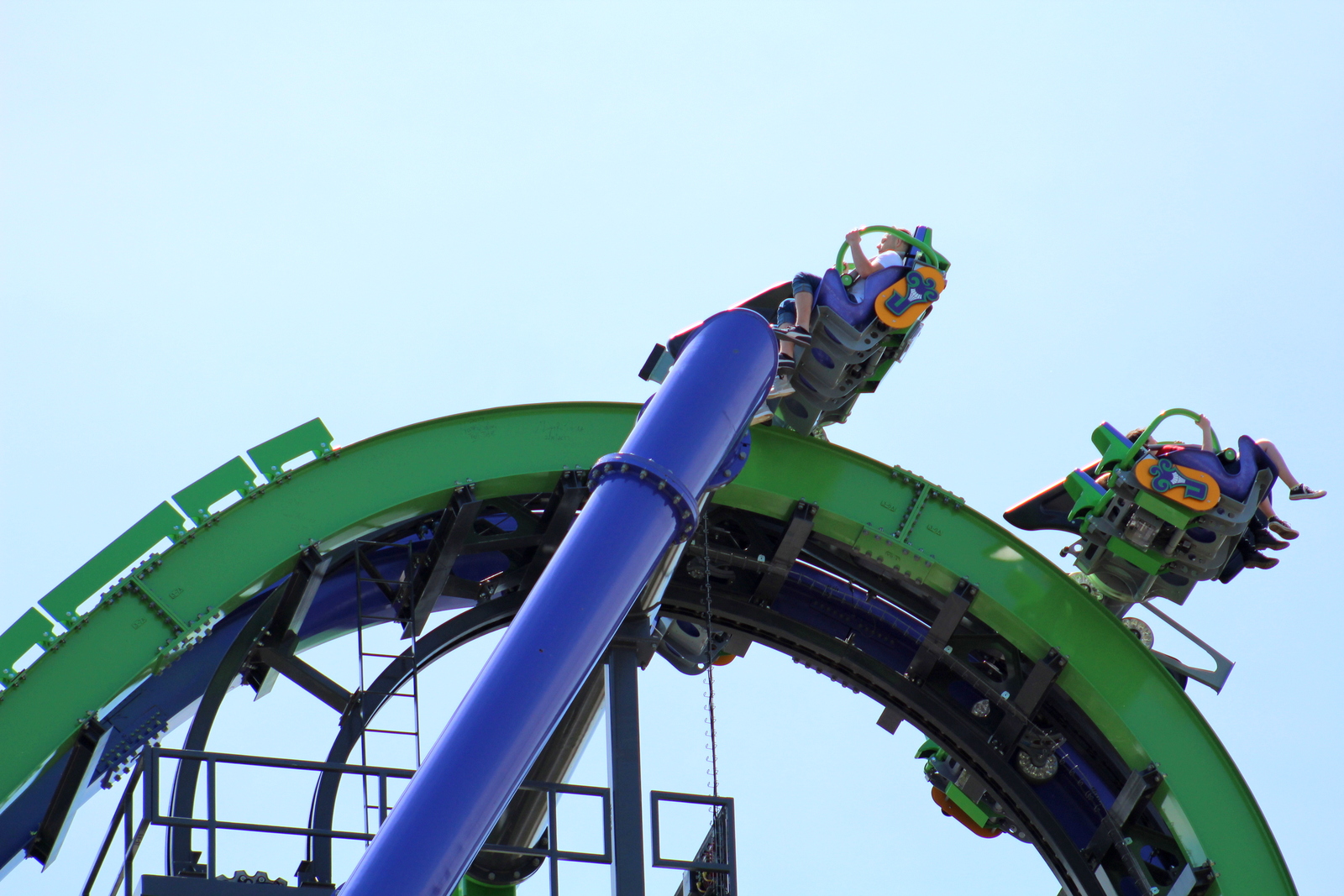 As the train crests the lift, you’ll be facing back-to-back with the other pair of riders on your side of the track (purple or green). 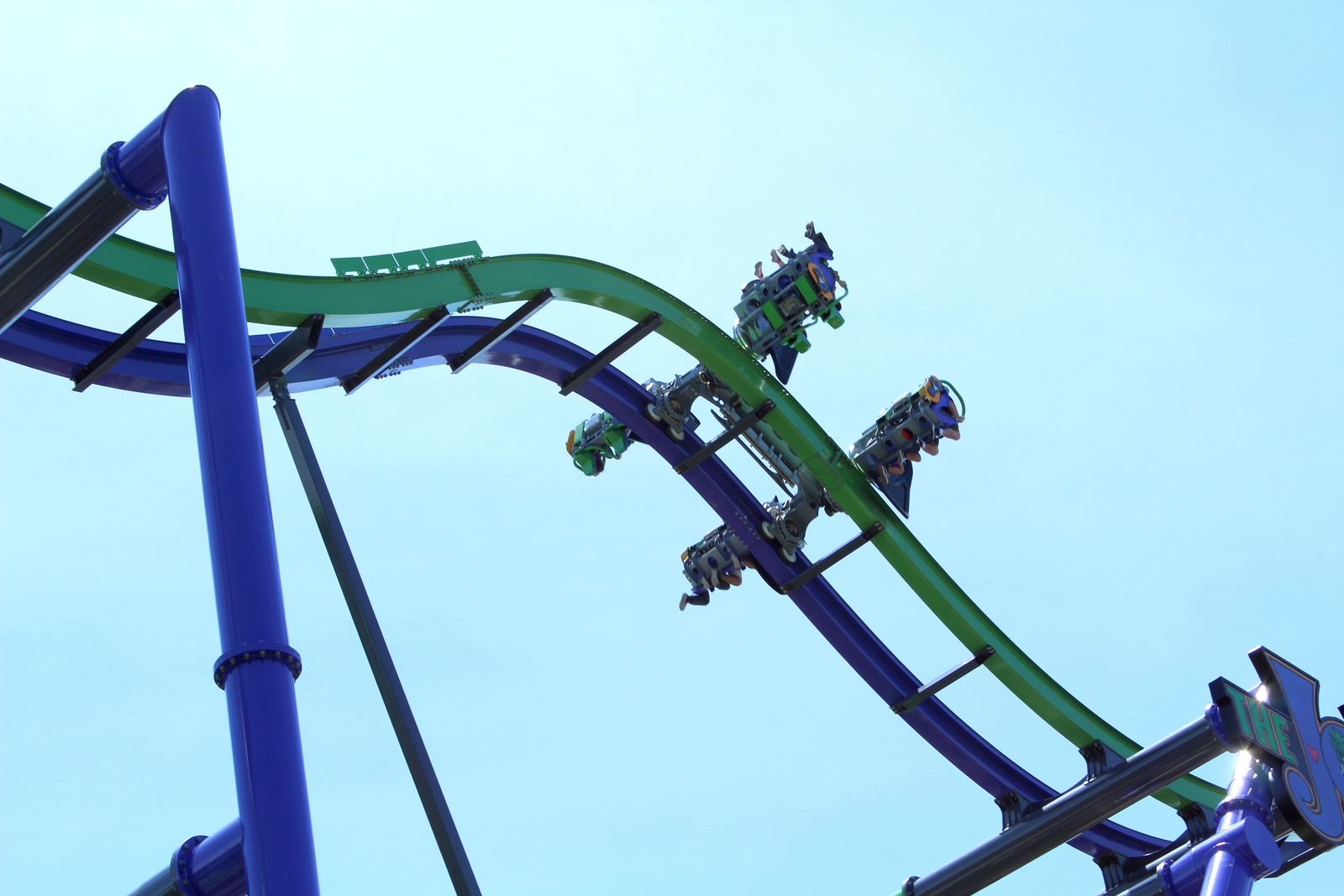 Depending on where you’re sitting, you’ll fall forward or backward during the first dip. Sometimes I completed a full spin, others I remained inverted briefly before rocking back to a more upright position.

Either way, it was a completely new sensation to me (as was most of the ride). 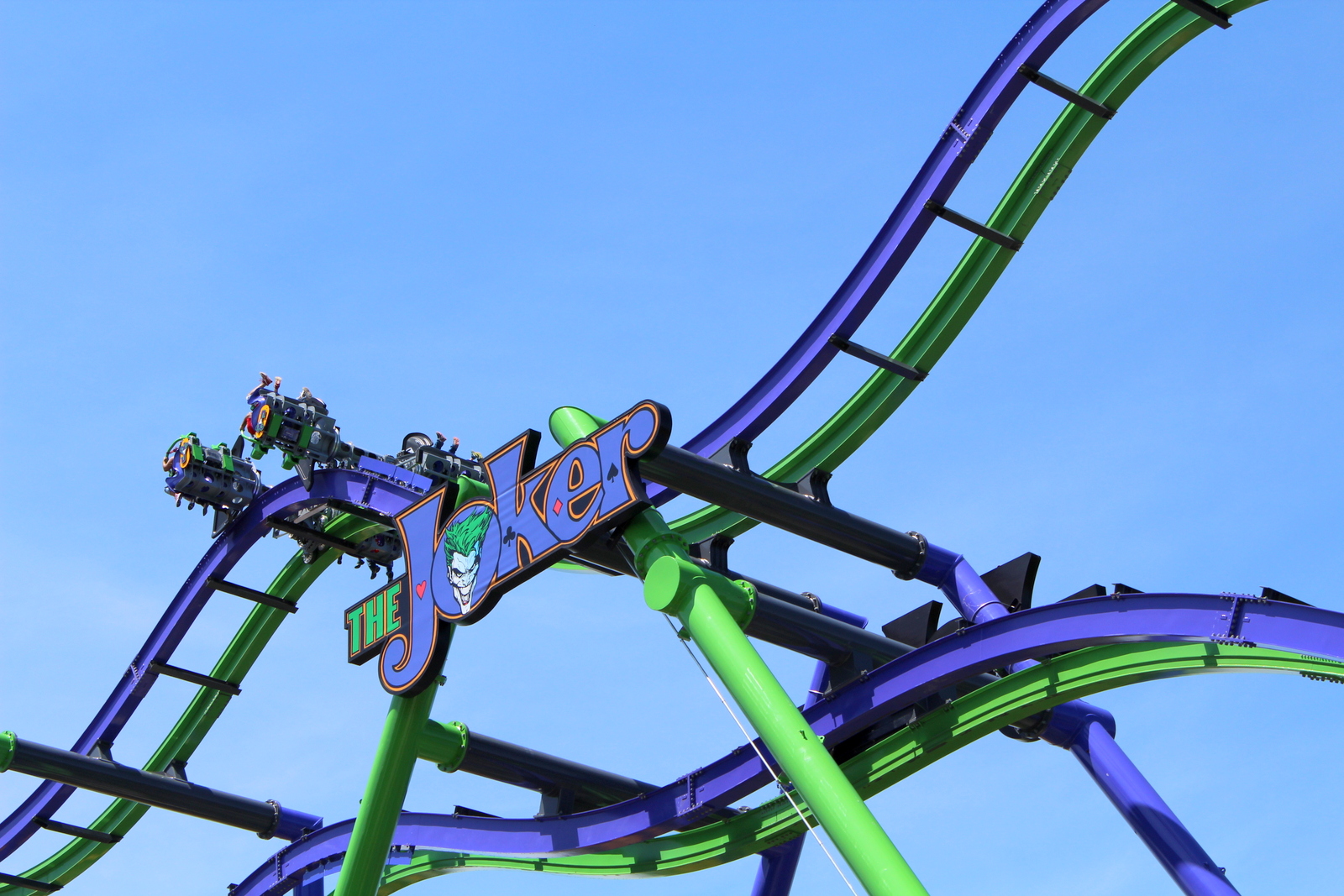 Your ride experience is (allegedly) heavily dictated by weight distribution on the train. So unless you ride with the exact same group of people every time, each cycle will be a little different from the next. 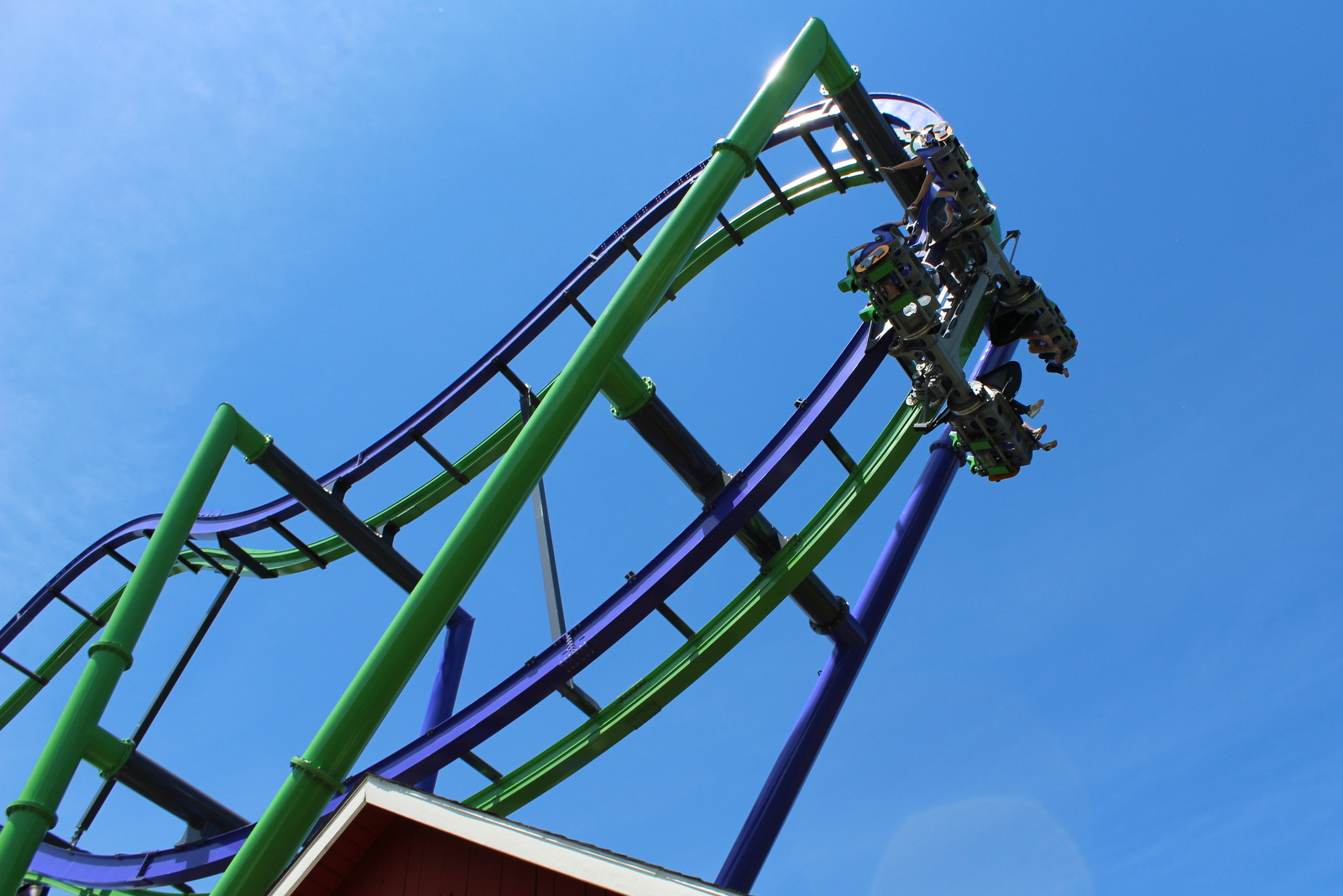 It’s hard to describe what happens after you complete the first raven turn (dive). Each ride is so different and so bewildering that it’s difficult to establish a timeline. I had no idea what was up or down or if I was facing forward or backward. 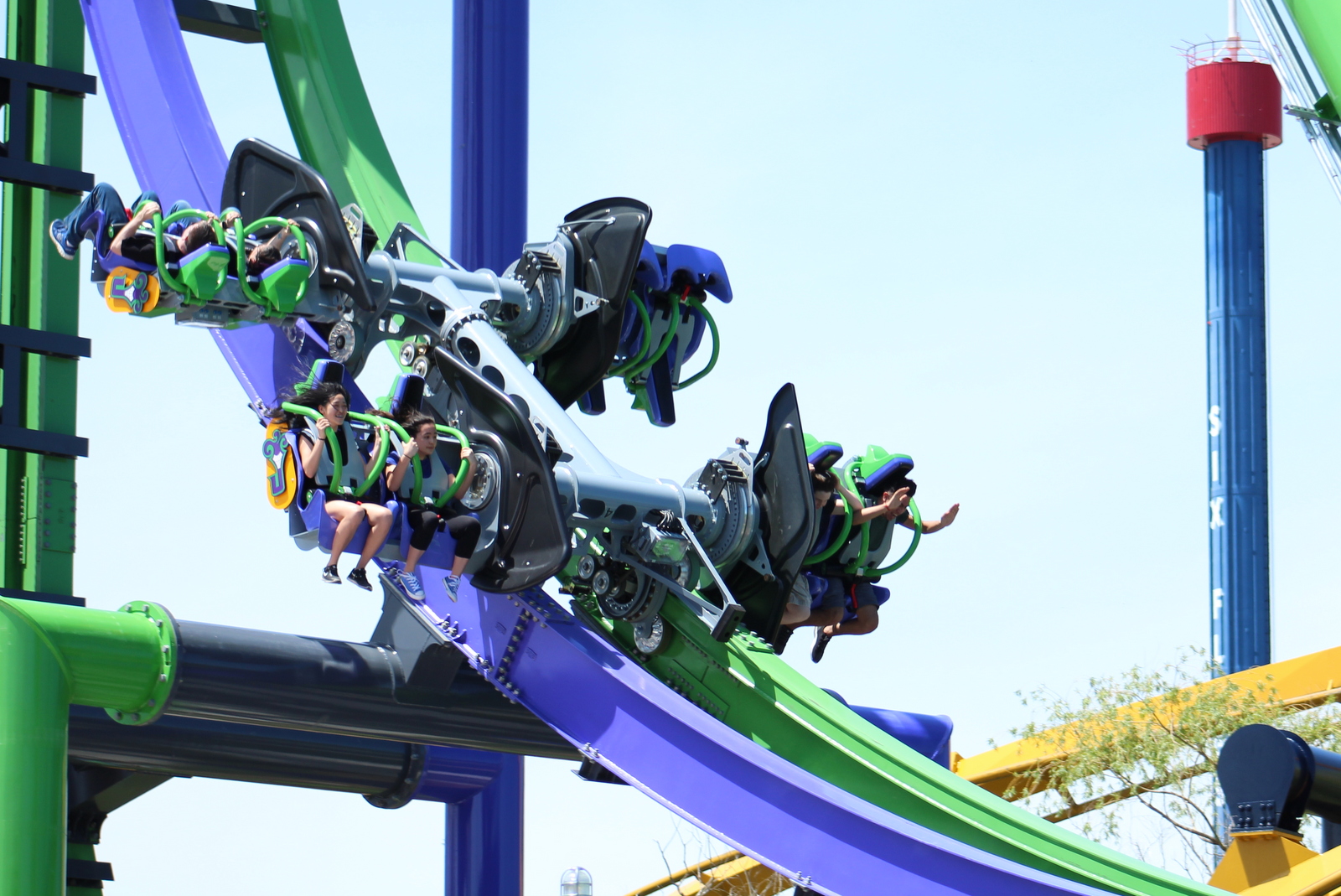 Joker is short in length — the time from exiting the lift to entering the final dive and brake run lasts roughly 30 seconds. But there is absolutely no reprieve at any point during that half of a minute. You are either hanging upside down, rocking back and forth or completing 360-degree flips. It’s pure, uncut insanity. 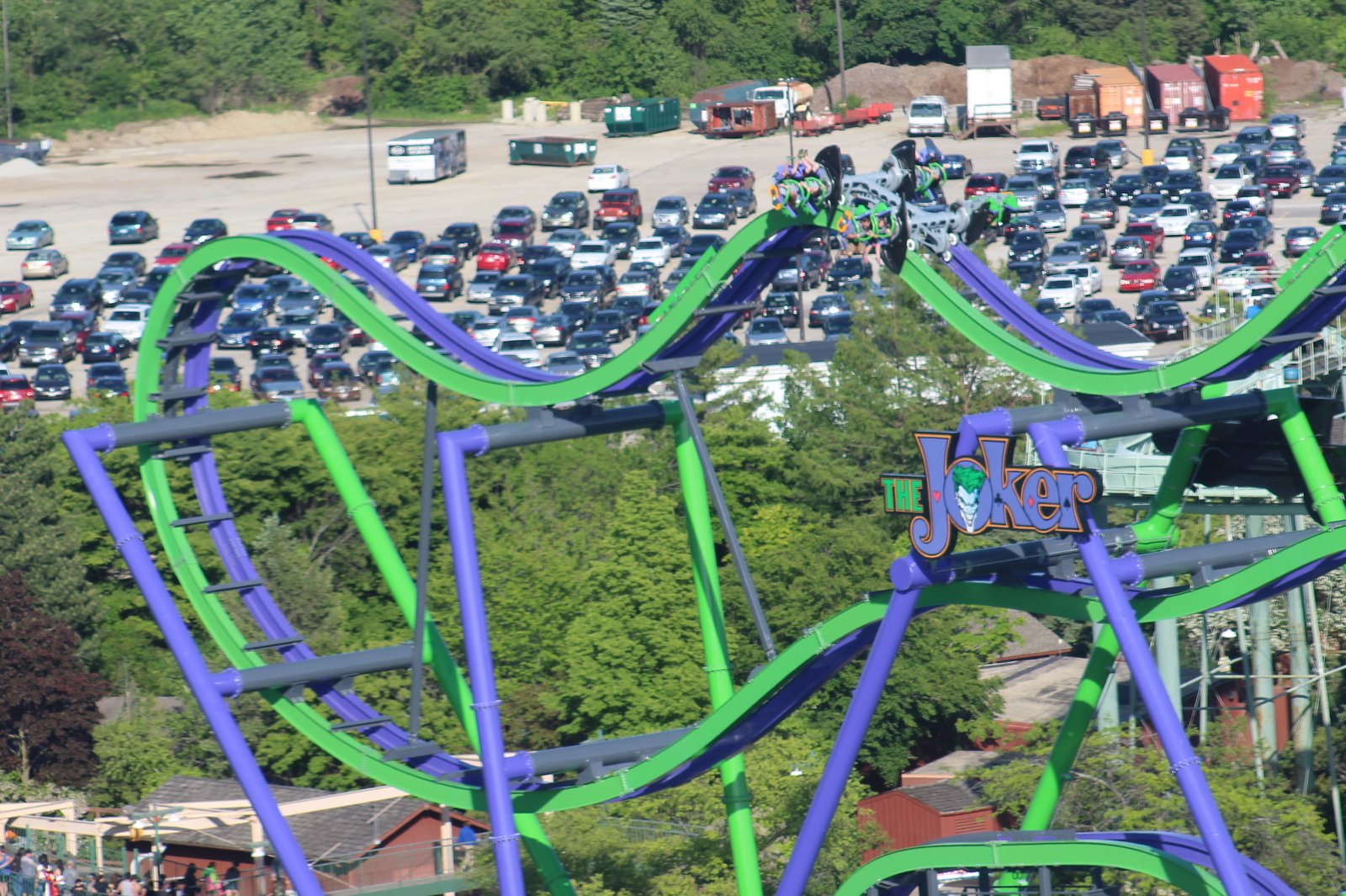 The purple side is believed to be more tame than the green side, and that seemed to be the case with my rides. According to S&S’s website, the park has at least some control over how much each car spins:

The 4D Free Spin is the perfect “ride-again” coaster that everybody wants, because depending on the weight, spoon position and rider interaction it provides a different ride experience every time! The park can also make easy adjustments to make each spoon more or less extreme.

So while weight distribution does appear to play a role, the park still has some say in just how crazy this ride can be. 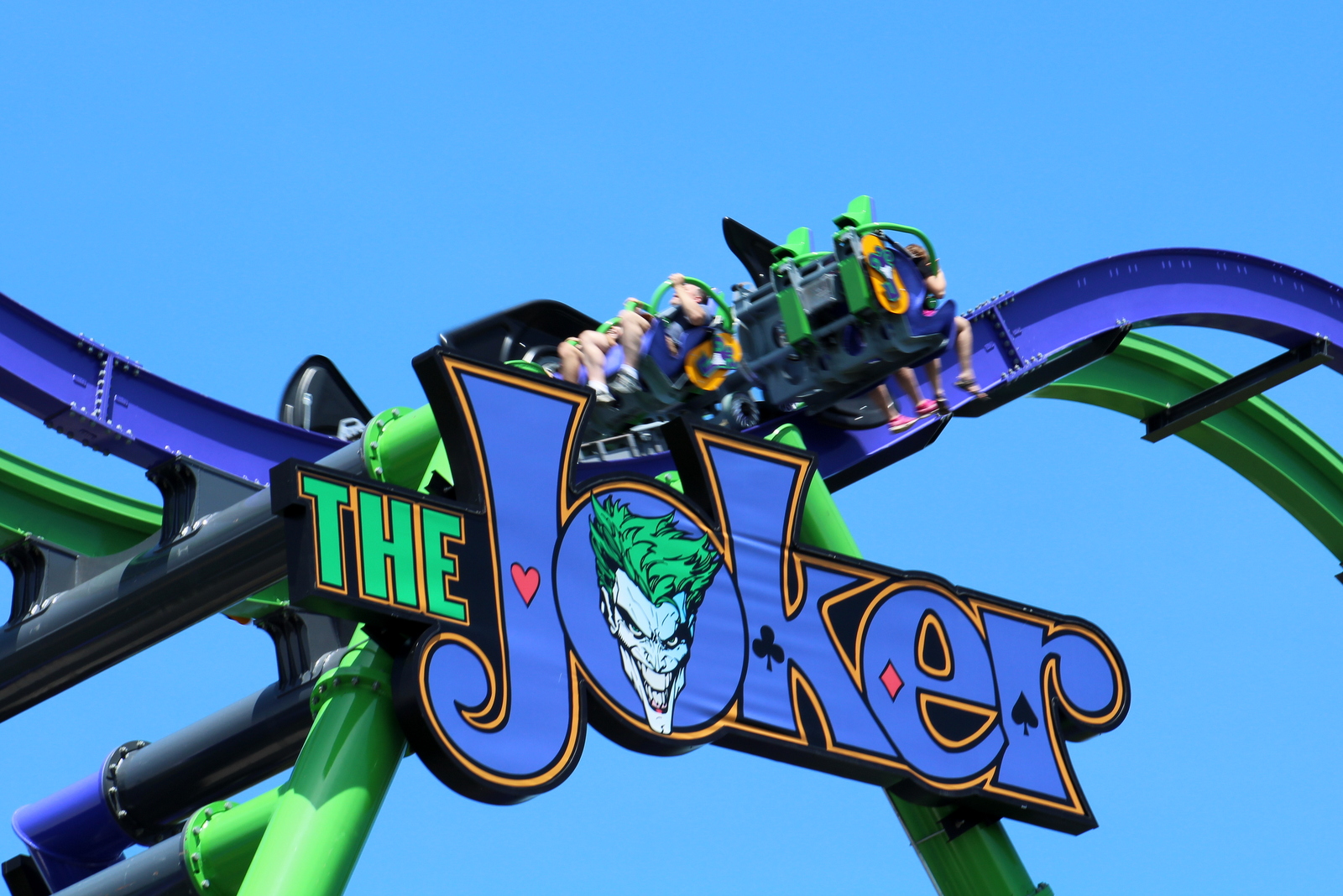 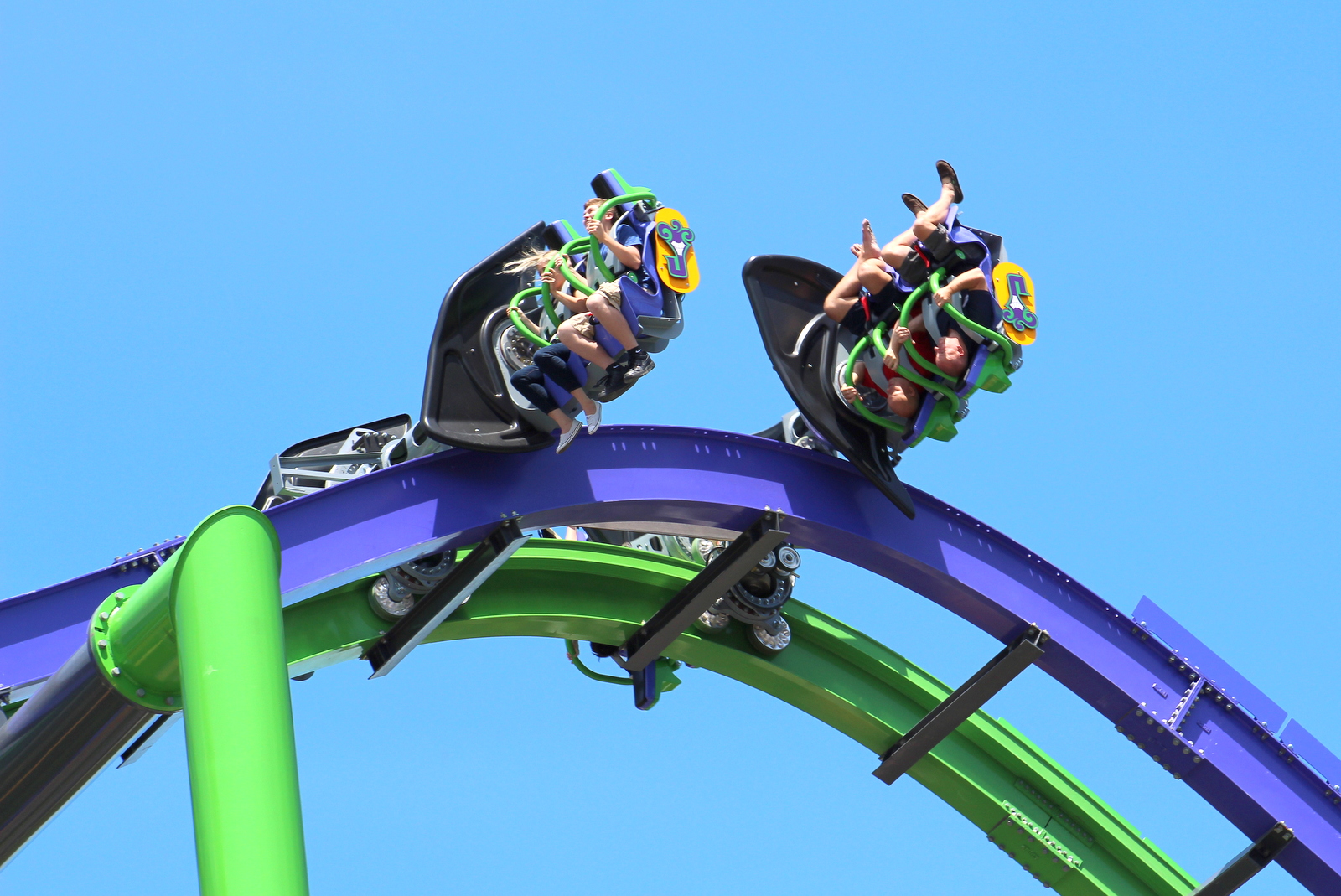 While five Six Flags parks now feature this specific model, there is nothing like it anywhere near Great America’s turf. And for that reason, I have no doubt that this ride will be a massive success for the park. 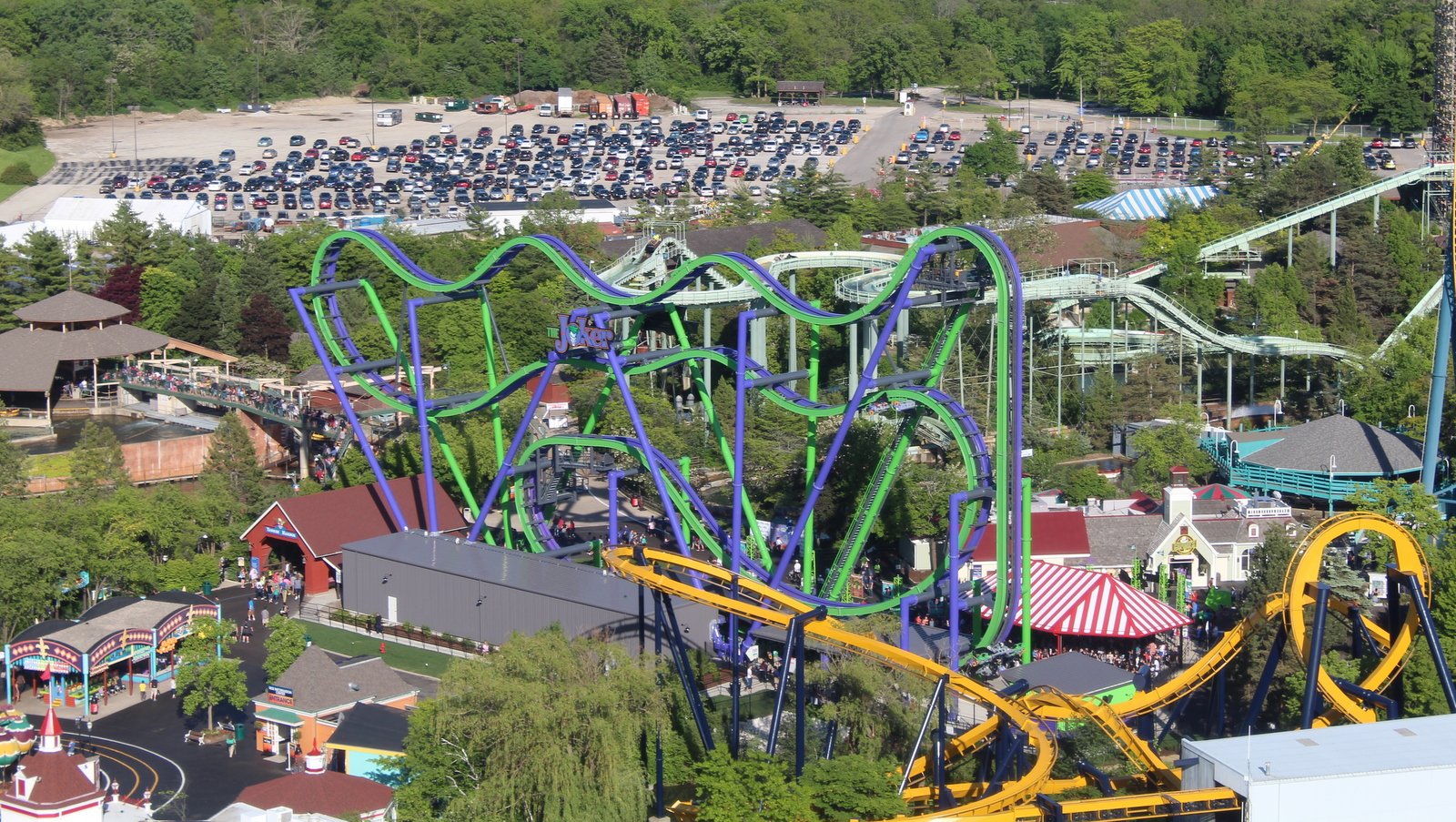 Watch a video of Joker in action below:

And see more photos of Joker at Six Flags Great America on our Facebook page!

Have you ridden Joker yet? Share your thoughts about Six Flags Great America’s newest roller coaster in the comments section below.