China is quietly building a $6 billion, 420-acre theme park in southern China. And not surprisingly, the designs for the movie-inspired Global 100 theme park look amazing.

Global 100 is under construction in Haikou, the capital and most populous city of Hainan, China’s southernmost province. According to a 2014 news release from the park’s designer, Global 100 will be the largest theme park in the world at 420 acres.

The movie-inspired theme park will be just one component of the two-phase entertainment complex project. The park will be comprised of six themed “villages,” representing the following countries:

Each village is inspired by the culture and history of its respective country.

For instance, the China village will be inspired by the “ancient desert city” of the Loulan kingdom. It will contain twin towers housing a “major entertainment facility at the center:” 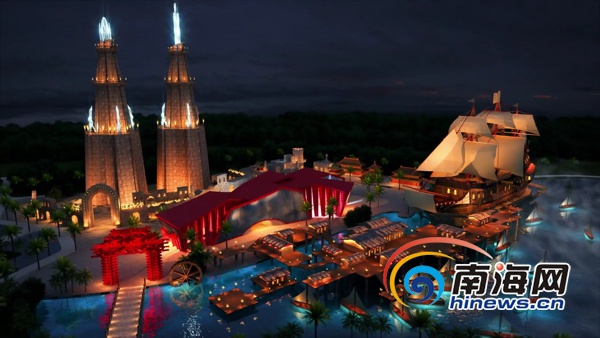 The fishing village-inspired waterfront area will be complemented by a giant ship from the legendary “Zheng He’s Expedition” tale. 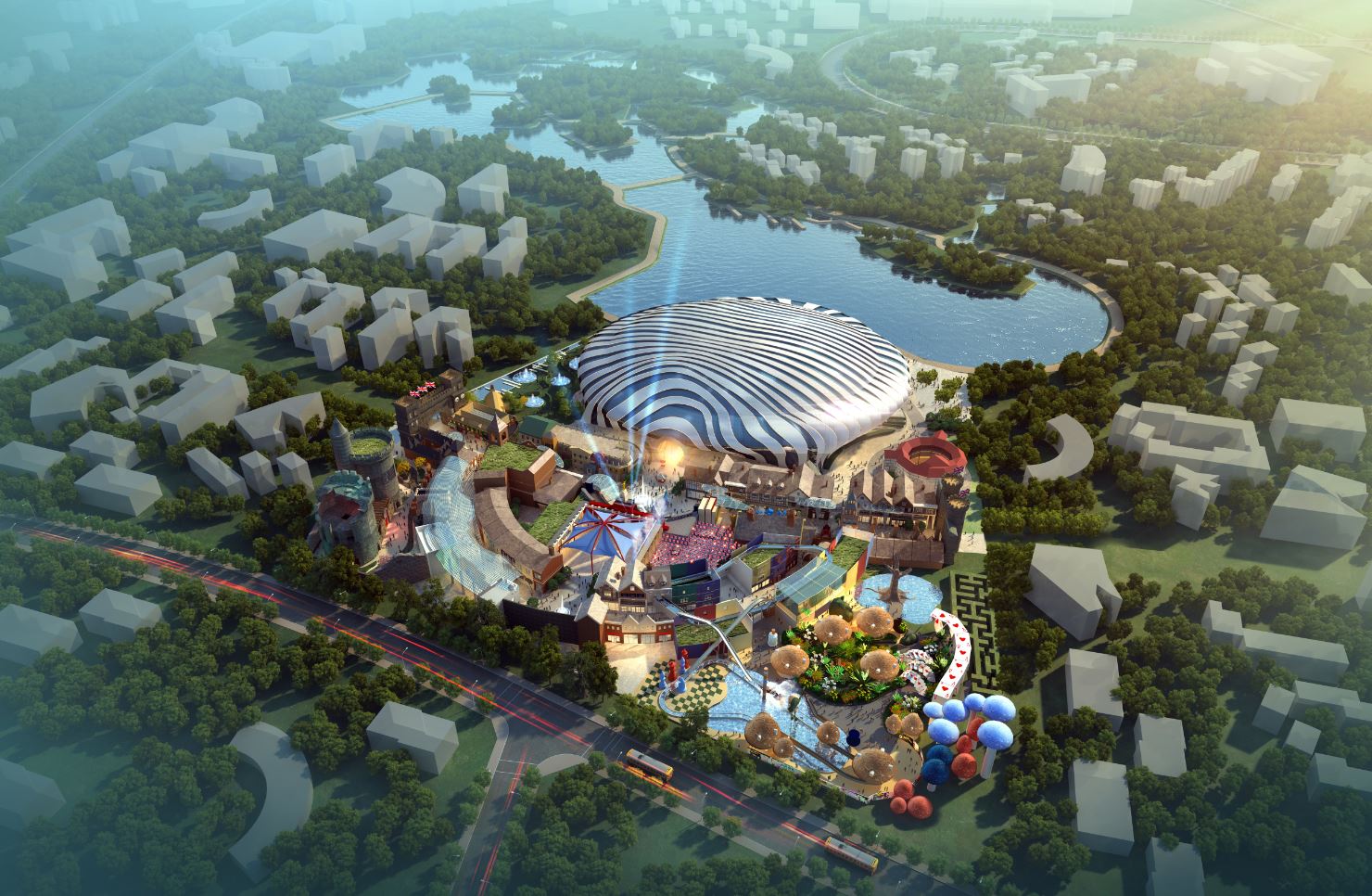 The United Kingdom village will feature well known characters such as 007 James Bond and Alice in Wonderland along with historic UK icons such as castles, villages and markets.

From the above rendering, it appears that a large part of this area will be indoors.

Separate from the six villages, the entrance to Global 100 is stunning to say the least:

In fact, the abstract design is unlike anything I’ve seen at a theme park.

Aside from the beauty and size of the theme park itself, the park will also offer a 160-foot-tall indoor drop tower that seats 96 people (yes, 96) — divided between three stacked levels of 32 seats. 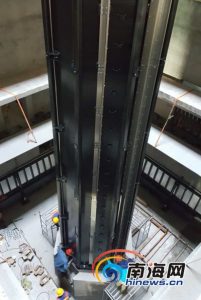 It’s unclear where exactly this will be located within the theme park, but it is believed to be the tallest attraction at Global 100.

The tower is being manufactured by Moser, the company responsible for Mach Tower at Busch Gardens Williamsburg: 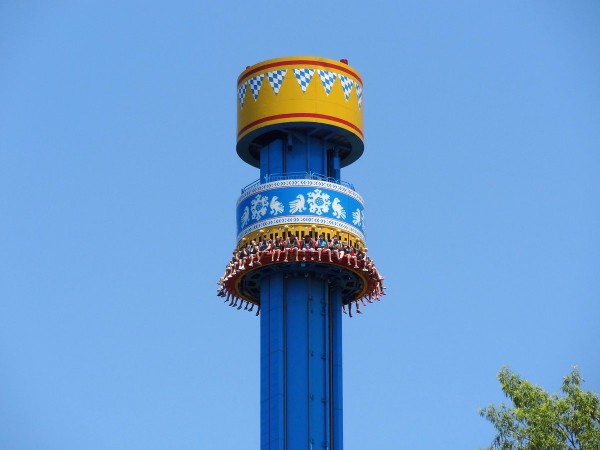 In addition to the park, Global 100 will also feature a volcano-themed resort hotel with retail and dining components. 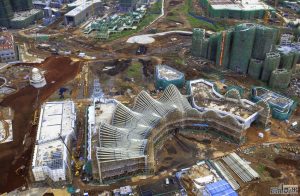 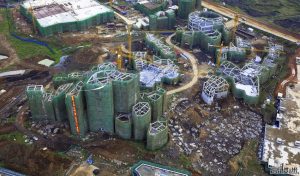 Seen below are the two towers of the Chinese village: 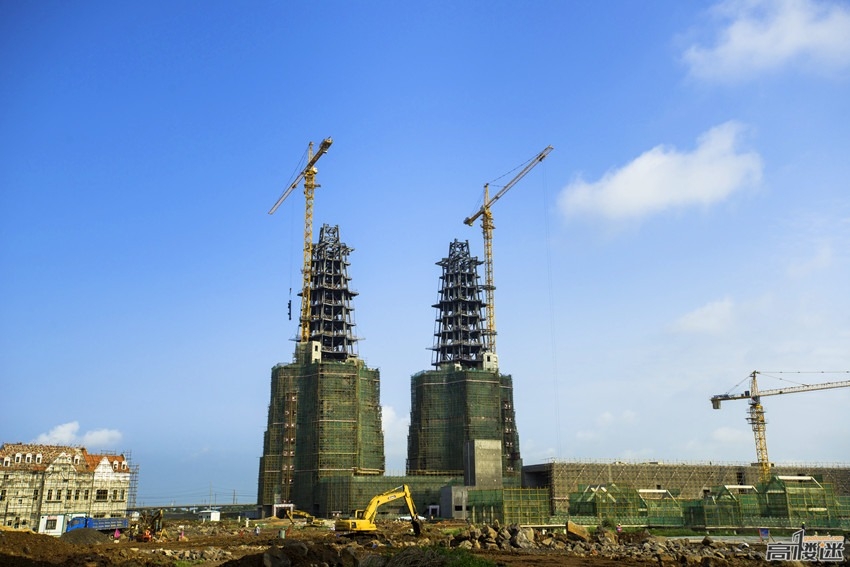 Meanwhile, the Dutch (Netherlands) village is also taking shape, even beginning to show some color: 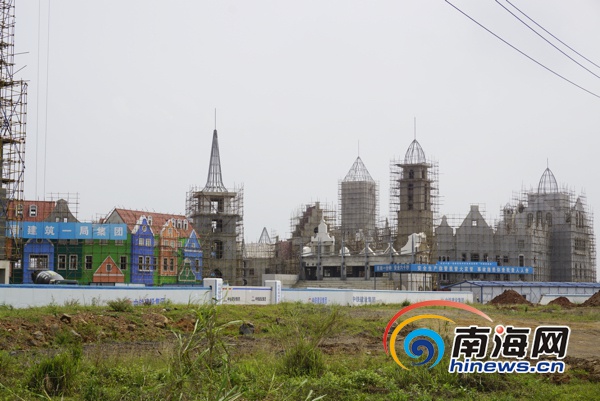 I can only imagine what the interiors of these buildings will look like. Considering the $6 billion investment, I’m sure they’ll be just as intricate as the exteriors.

You can see the scope of the Global 100 project in this satellite view: 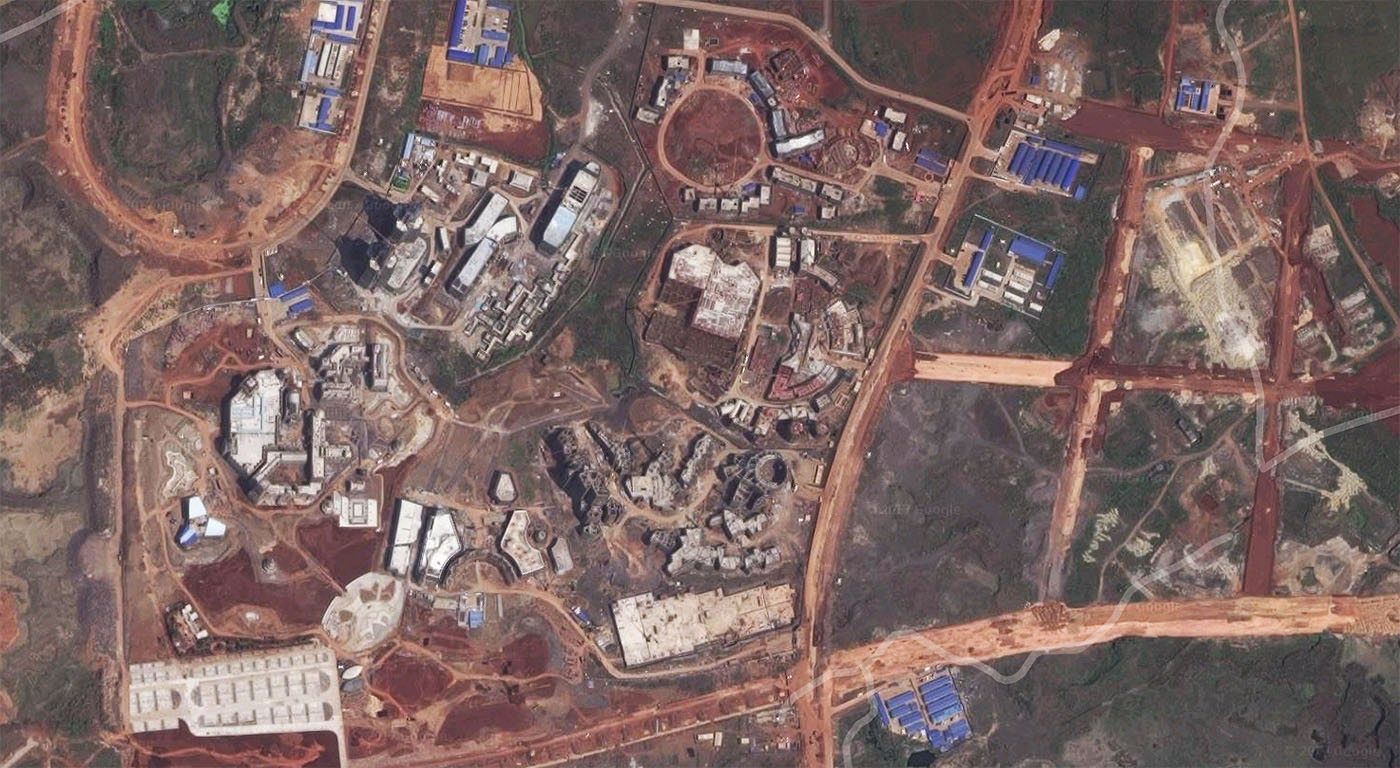 While that image doesn’t exactly match up with the site plan below (which could be dated), there is no doubting the size and scope of this project. 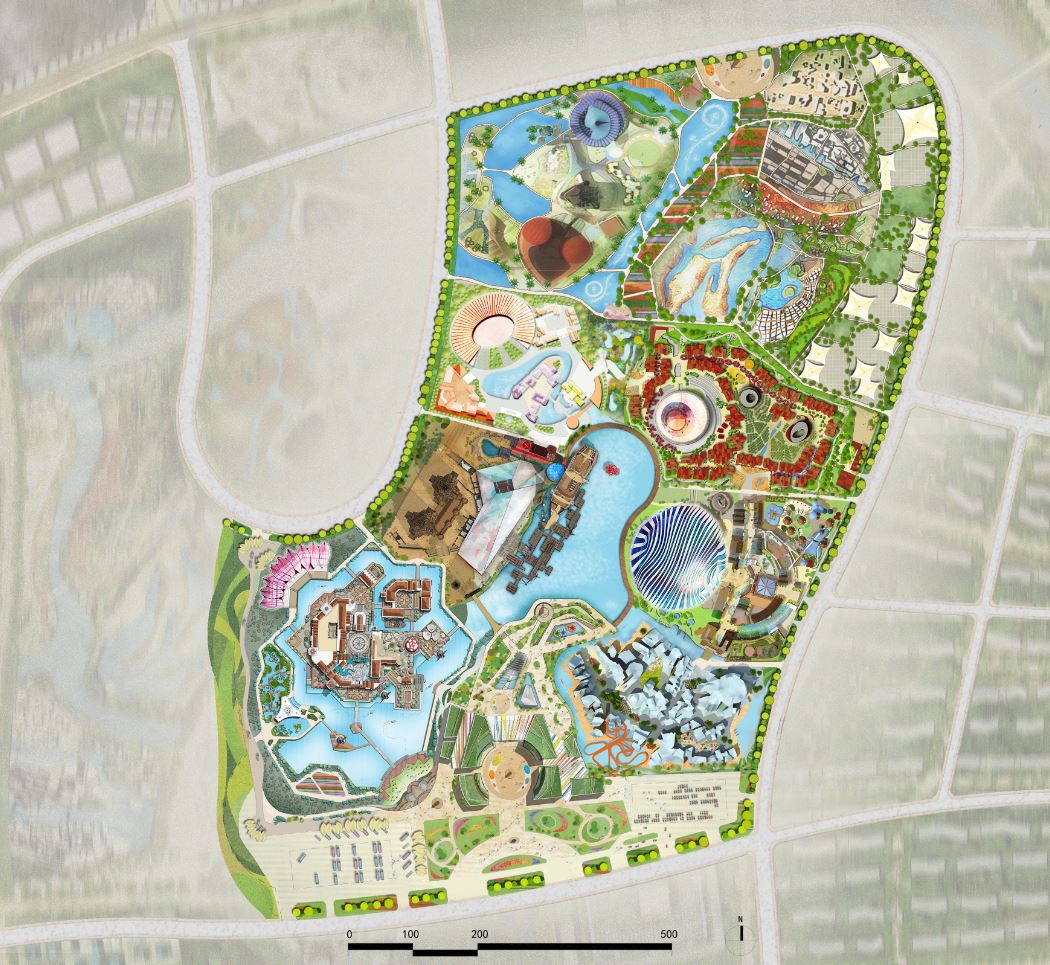 While I no explicit mention of a roller coaster in any of the literature about the park, there does appear to be roller coaster-like track seen in the above plan in the bottom-right corner of the park. And of course, there will be plenty of room inside the park’s numerous structures to house a coaster (or more).

Phase I of the Global 100 project is expected to open in October 2017. 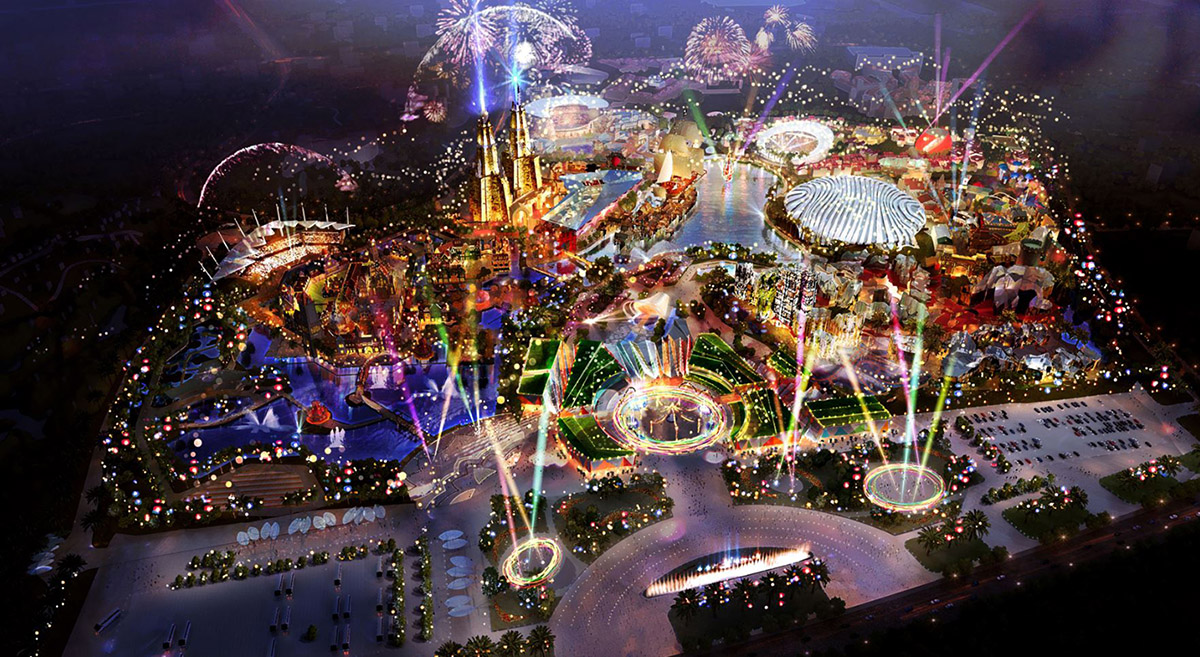 What do you think of this theme park development? Share your thoughts in the comments section below.