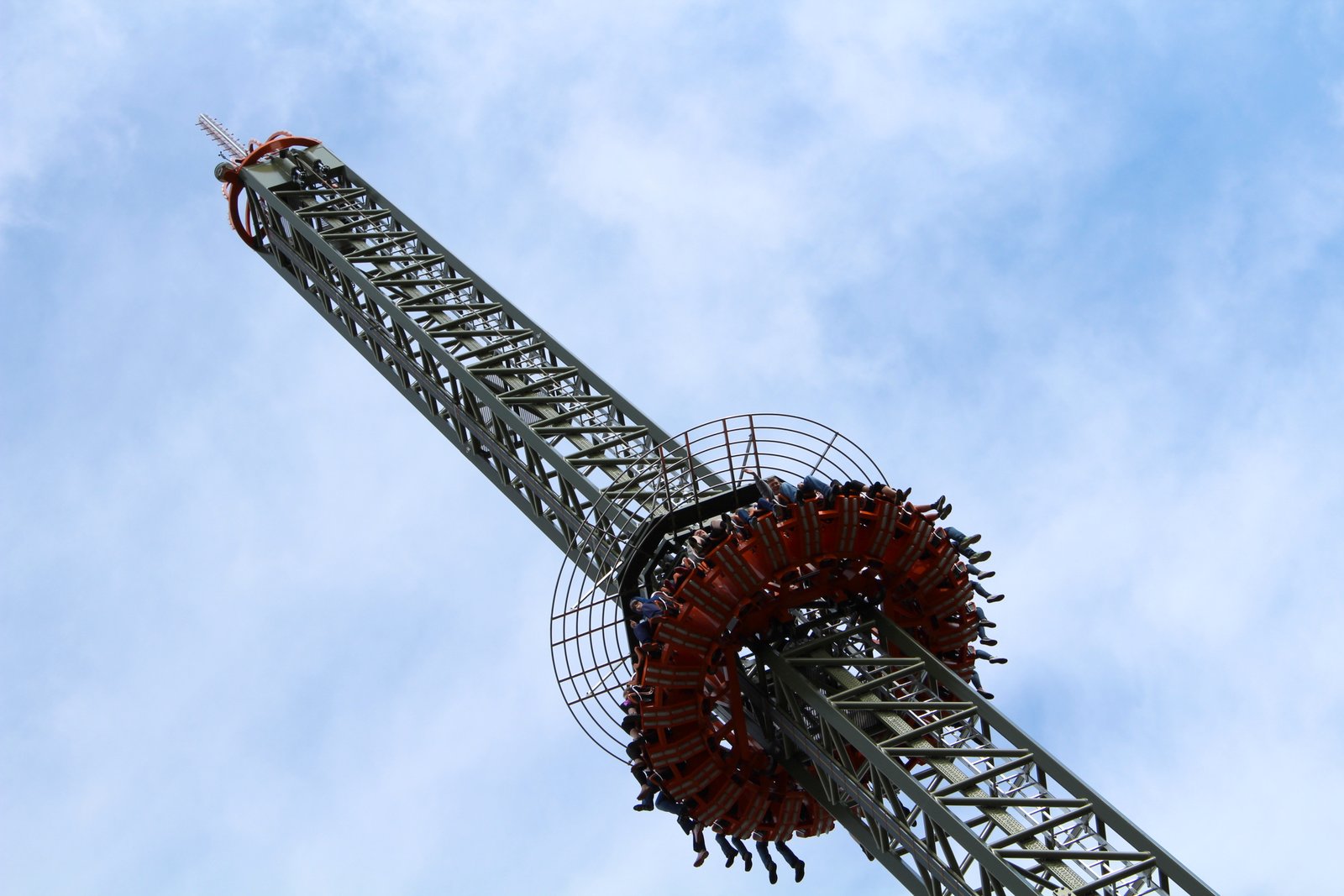 Drop Line stands on the foundation of the Timber Tower ride, which was removed from the park in 2012. 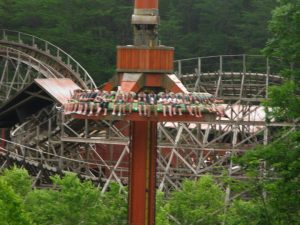 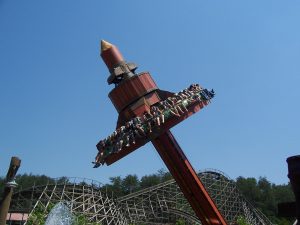 The Huss-manufactured “Topple Tower” was plagued with a number issues over its relatively short life at the park. 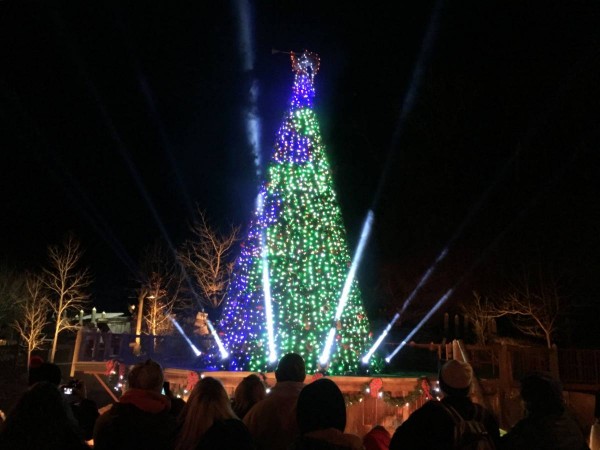 In the time between Timber Tower and Drop Line, the ride foundation was used for a variety of purposes such as the base for the park’s massive Christmas tree. 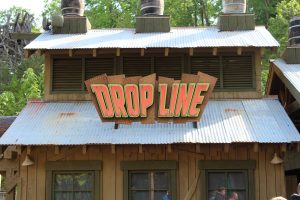 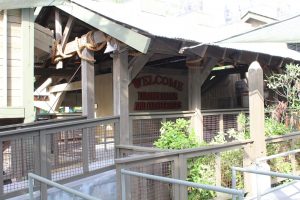 So it makes sense that Drop Line utilizes Timber Tower’s former entrance building and queue, both of which remained largely untouched. The queue line itself isn’t that long, so I wonder if an overflow queue will ever be needed. This will no doubt be a must-ride for many guests visiting the park this summer.

I love when parks repurpose remnants of old attractions, and Dollywood did a terrific job reusing what was left from the Timber Tower days.

Although the water fountains from Timber Tower were gone (or at least not in use during my visit), this barrel fountain display was a nice touch. 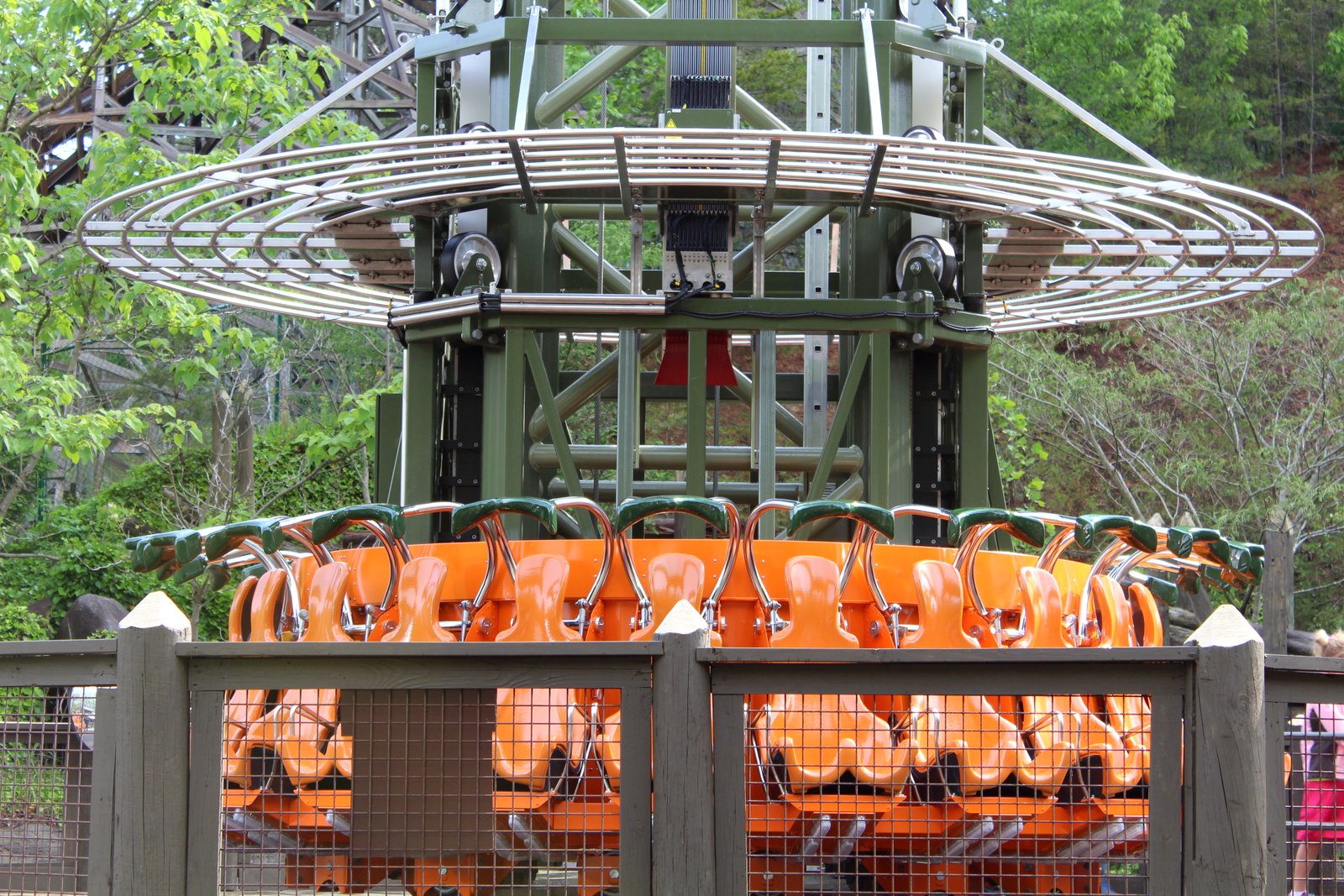 The ride vehicle features a ring of 24 seats with spacious restraints, which allow for near-unobstructed views.

Now, for the ride experience itself: 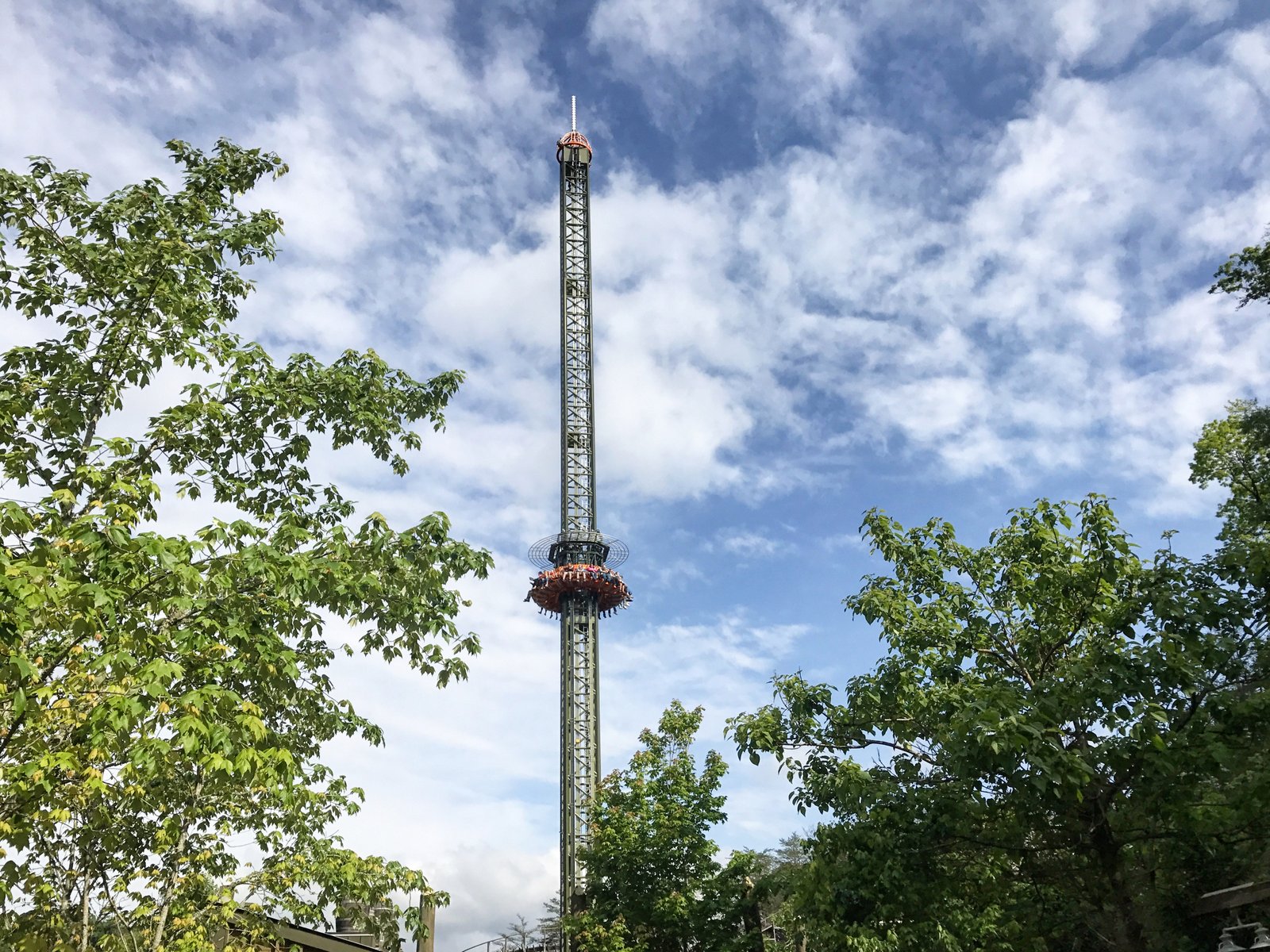 Once you’re strapped in, the ring of seats begins to rise slowly, rotating as it inches towards the 230-foot-peak.

The view is so beautiful that I nearly forgot to be anxious about the forthcoming drop. These freefall towers are one of the only types of attractions that still manage to get my adrenaline going, but I was too focused on my surroundings to even remember that I had a 23-story drop to endure. 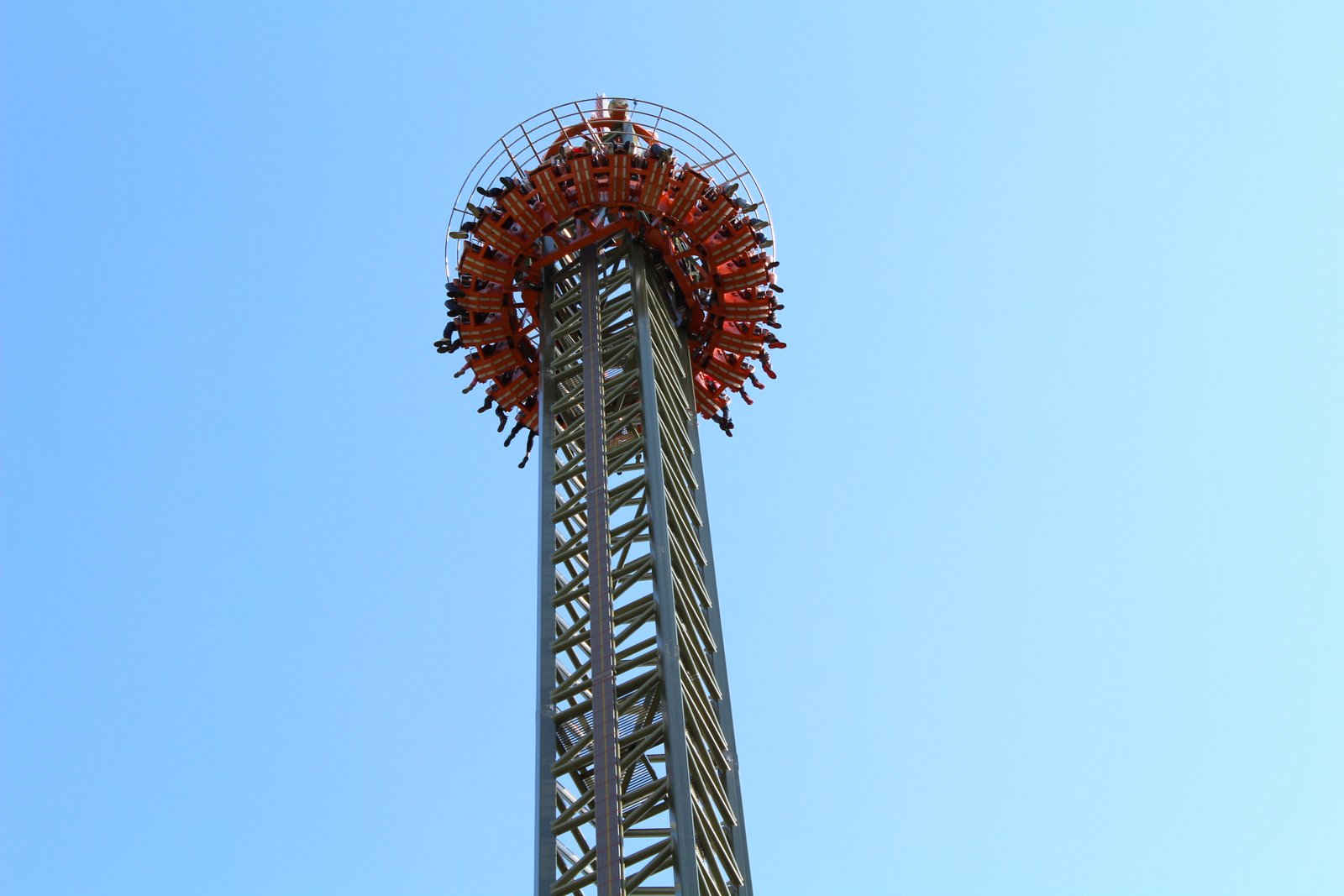 Once at the peak, the car completes a full 360-degree rotation, giving each rider a panoramic view of the park and Smoky Mountains. No picture can do this view any justice, so I’ll just let you imagine it (plus, no loose articles are allowed on the ride, of course). 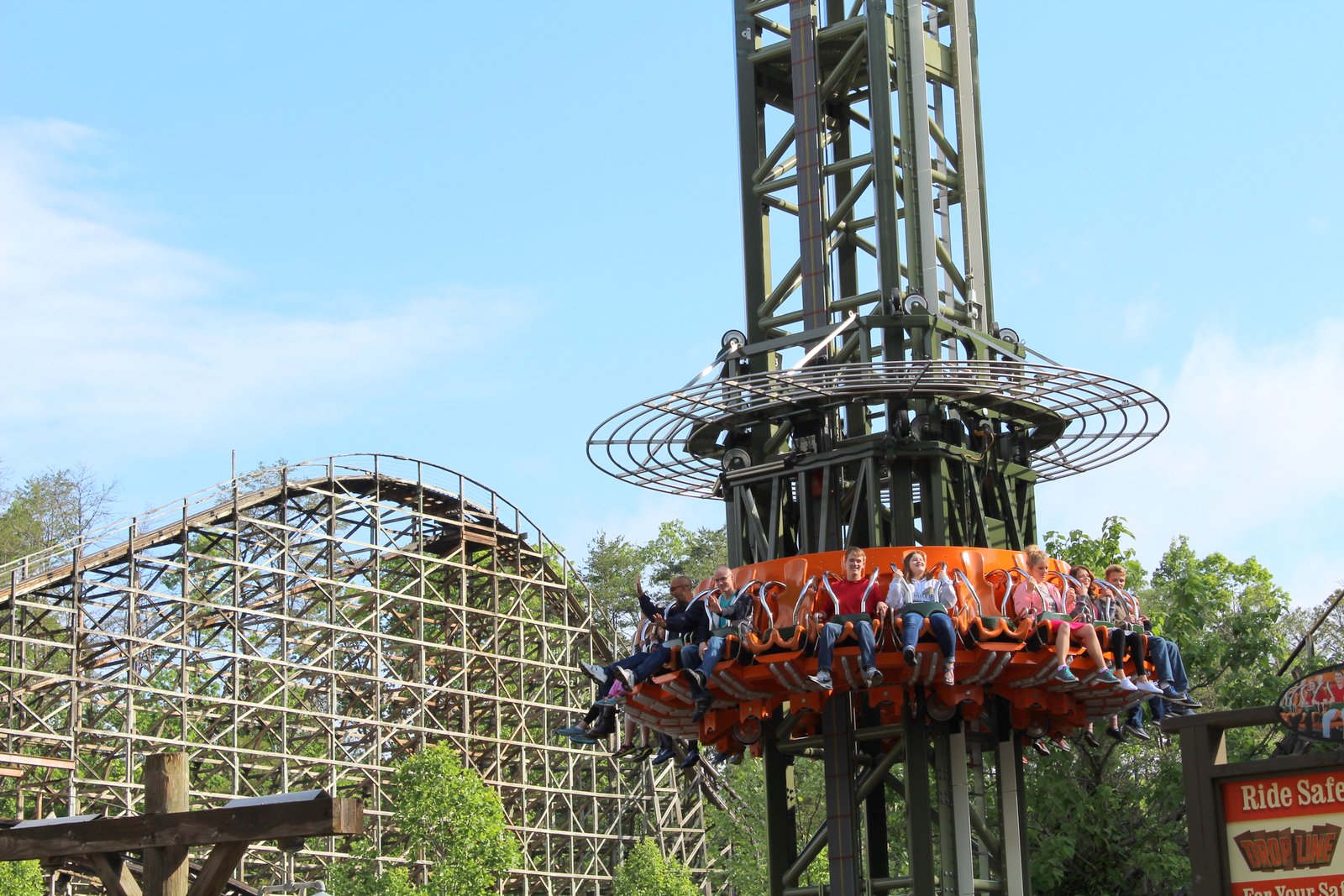 The ride plunges, reaching a top speed of nearly 78 mph. The magnetic brakes slow the car as it falls back to earth. 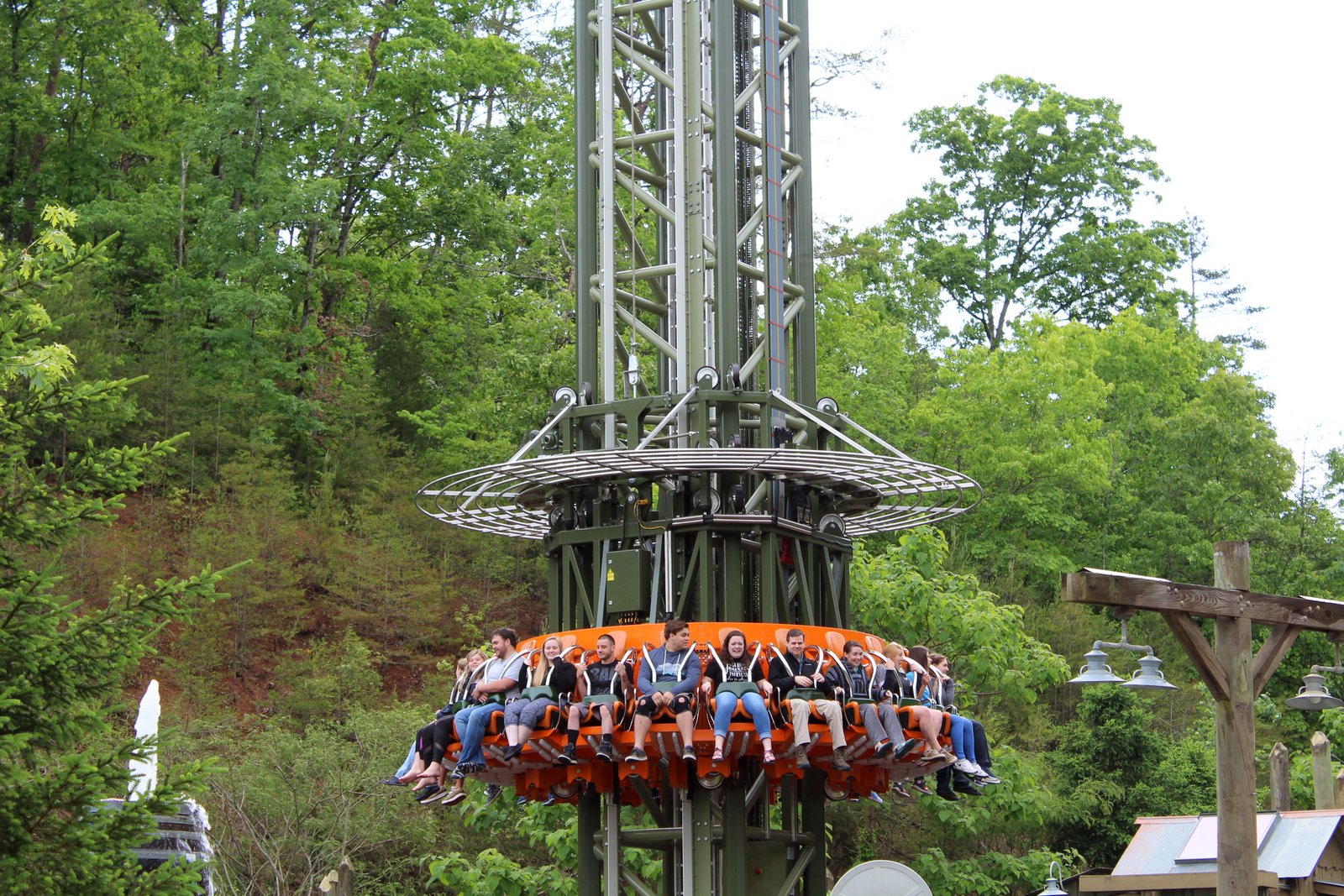 The total ascent and drop lasts about two minutes, the latter of which only consumes a couple of seconds. I’d fully support spending an hour at the top of the tower admiring the view, but I’m sure the guests waiting in line wouldn’t agree to that long of a ride cycle.

Watch an on-ride and off-ride video of Drop Line below. Note: the video doesn’t do the view much justice:

I had long believed the spot would make an ideal spot for a drop tower, and I’m glad Dollywood was thinking the same.

Drop Line is the thrill ride that Dollywood has been missing, and it adds a flat ride to the newer section of the park “loop” which is dominated largely by the park’s roller coasters (no complaints from me). 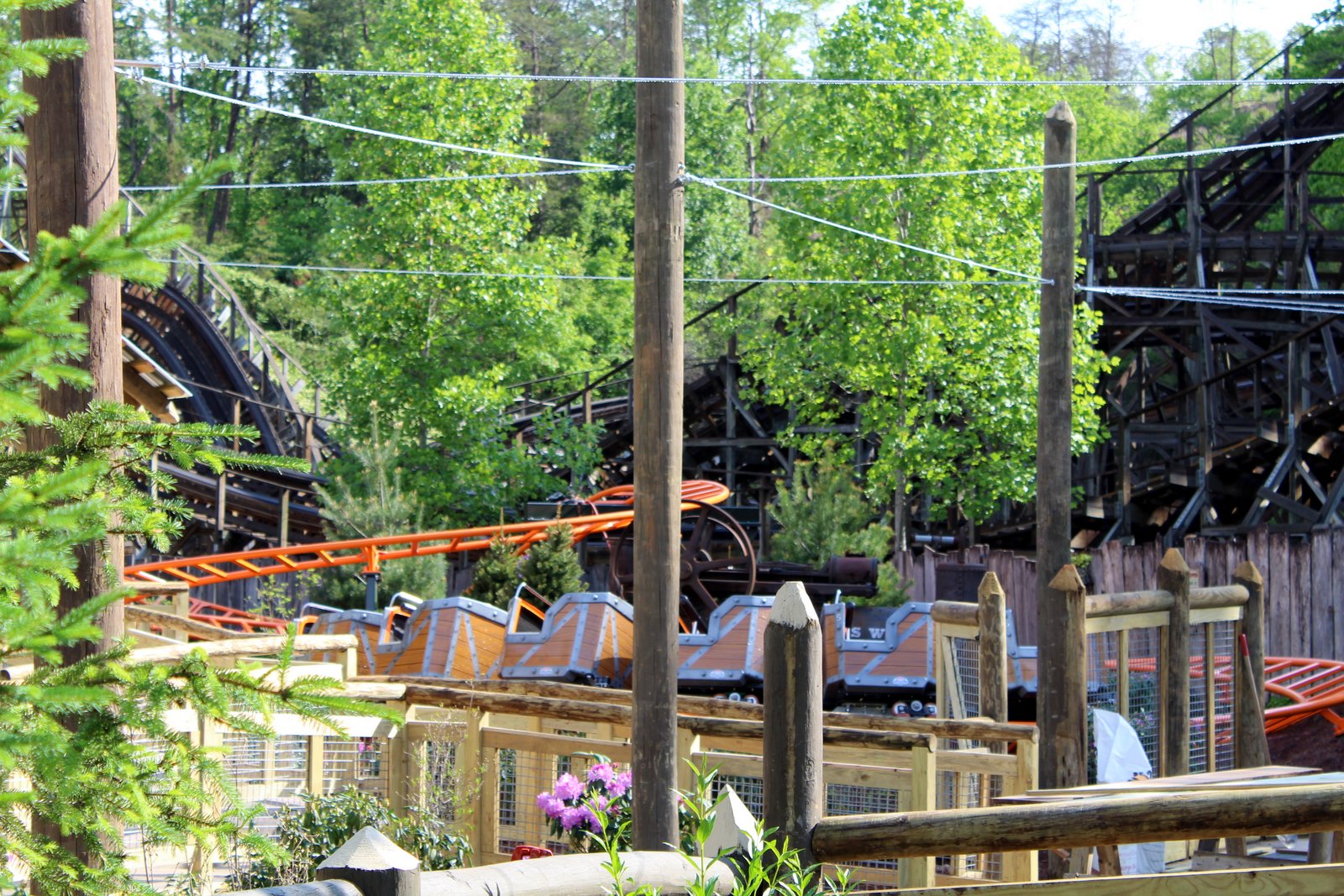 Speaking of the park’s roller coasters, the new Whistle Punk Chaser hasn’t opened yet, but it looks nearly complete, so opening day shouldn’t be too far away. 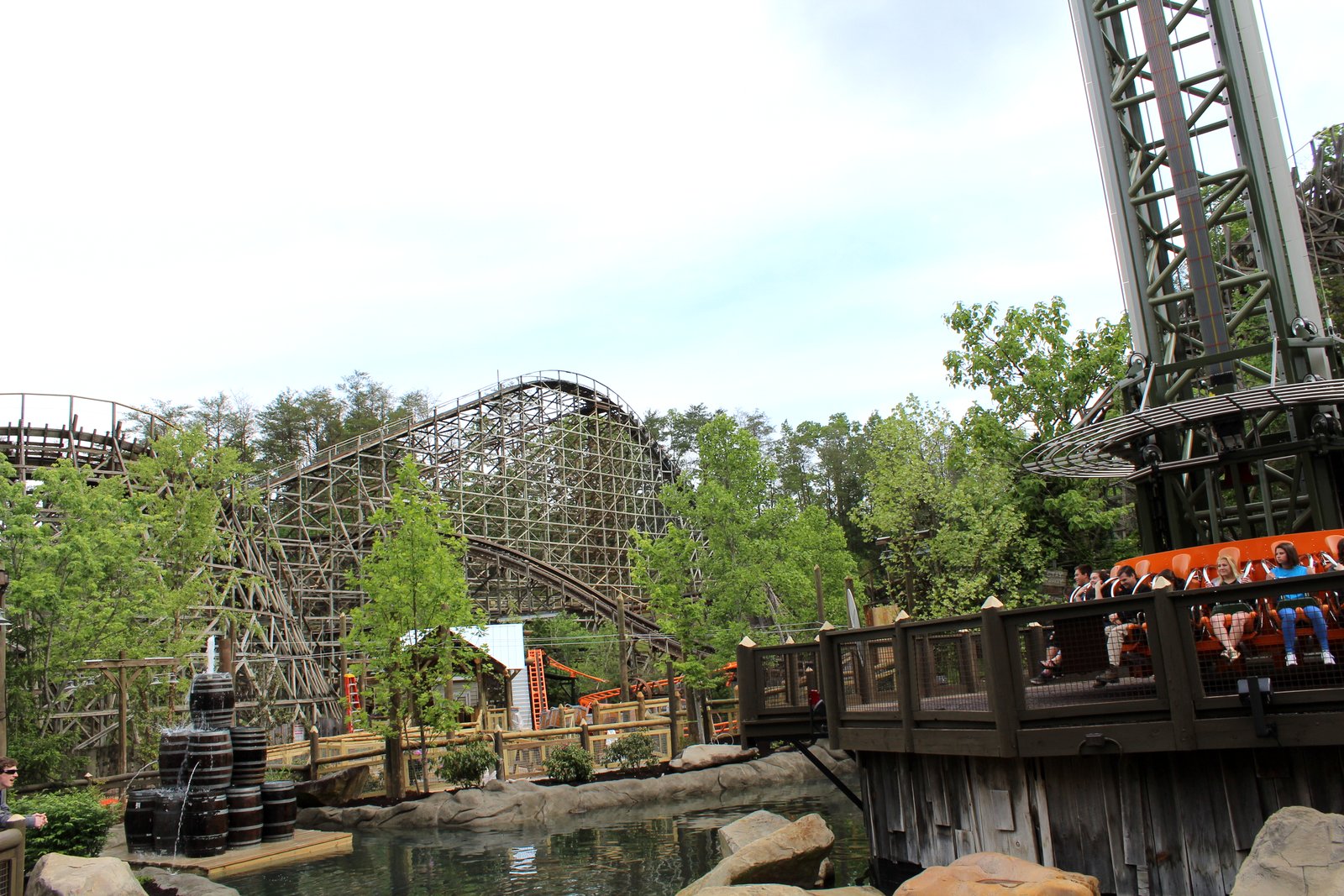 But until it opens, you can at least enjoy a beautiful view of Thunderhead. 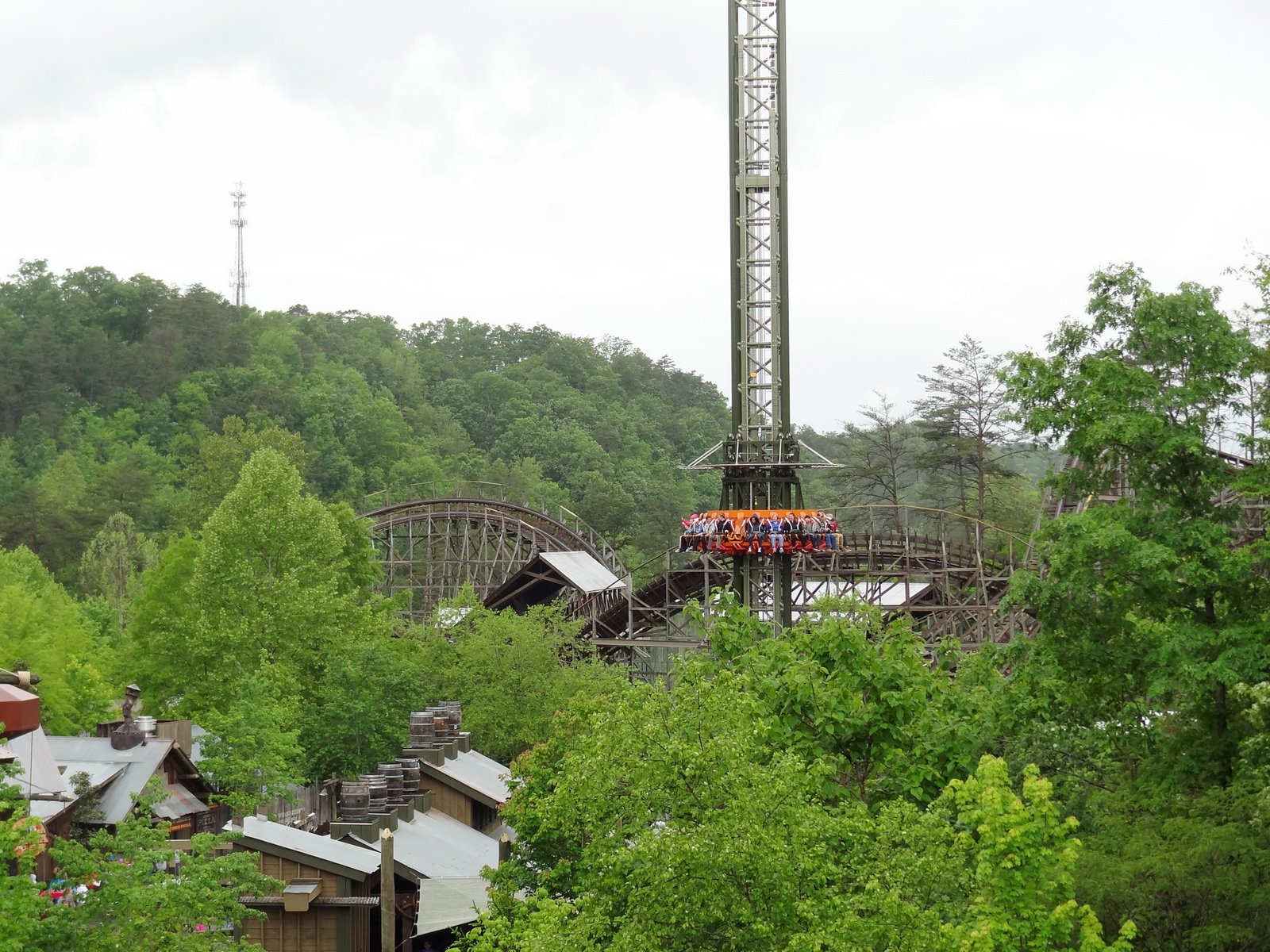 I knew the forecast called for a soaking rain for most of the day, so I came prepared. I wasn’t about to let it ruin my day. 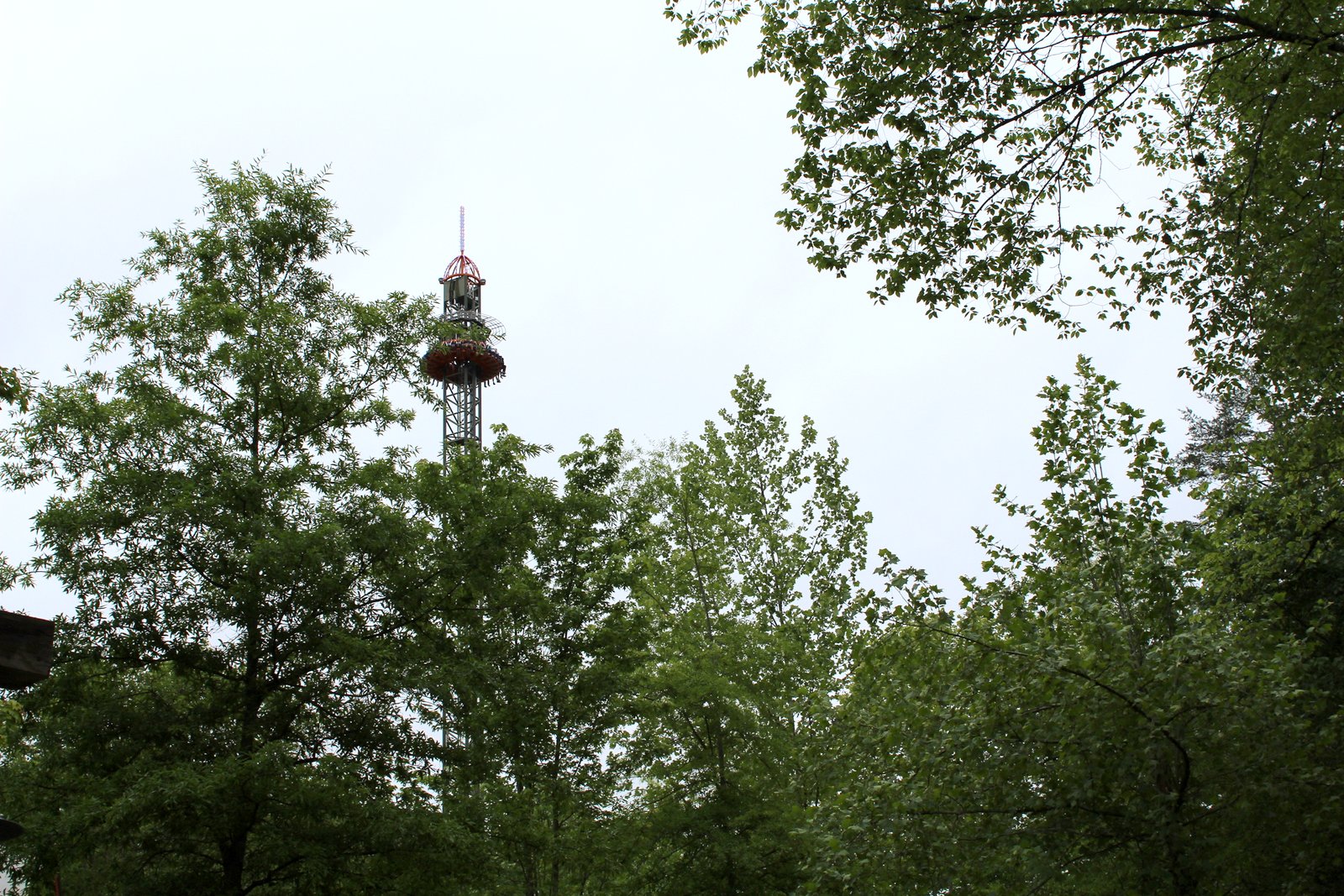 After all, a rainy day at Dollywood is better than a not rainy day nearly anywhere else.

Now while the rain doesn’t bother me, the temperatures in the mid-to-upper 40s were harsh, especially for May. But that cold weather didn’t stop some guests’ fun: 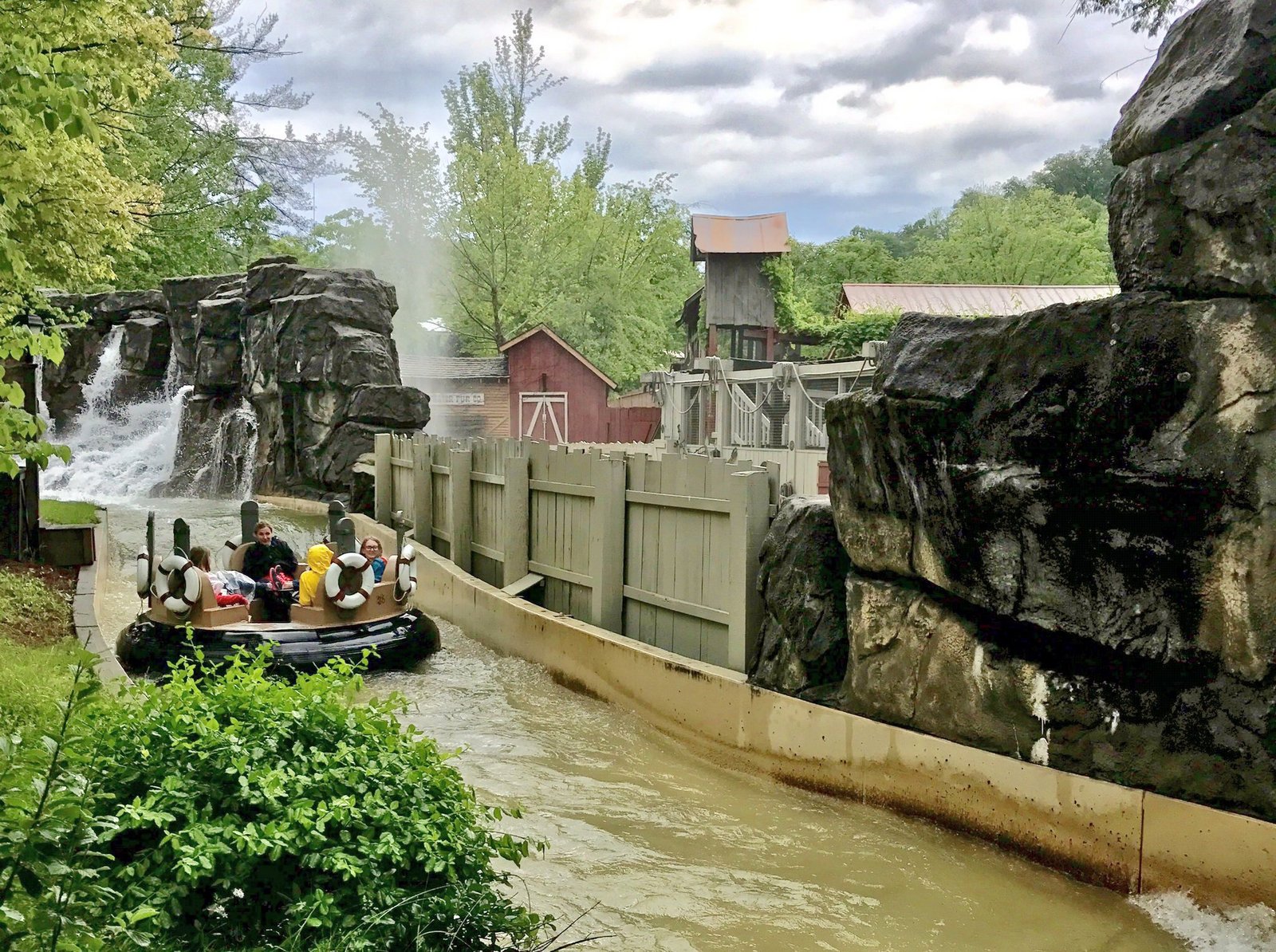 I have no idea how someone could ride a rapids ride in 45-degree weather, but they seemed to be enjoying themselves. Hey, whatever works. 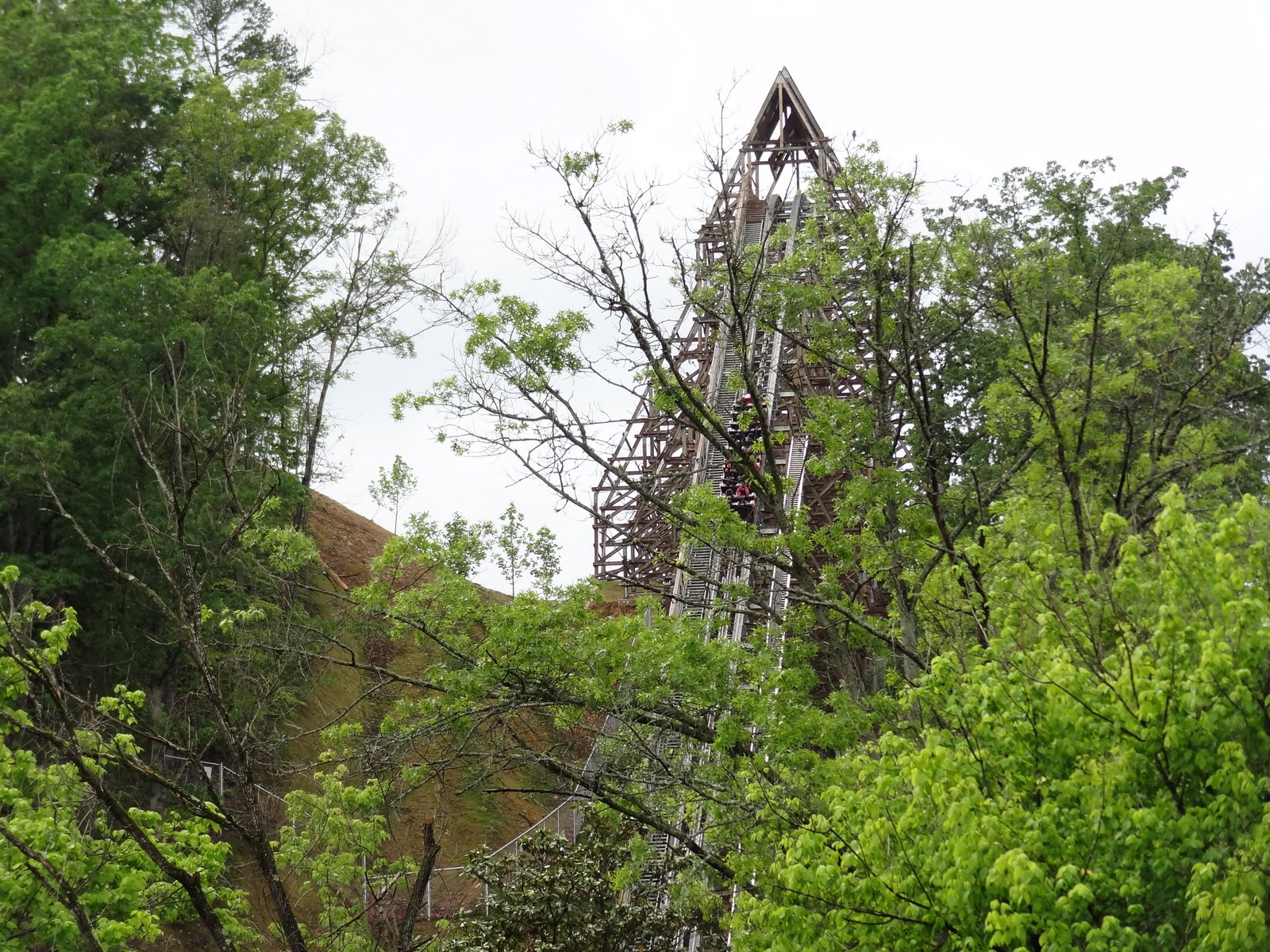 Lightning Rod went down just minutes after the park’s 9 a.m. opening. It opened intermittently throughout the day with one train only. I was thankful that I got to ride it twice.

As much downtime as the ride has faced since opening last year, I was shocked that it was operating in the moderate-to-heavy rainfall:

SO CLOSE! Don't let me down, Dolly! pic.twitter.com/fyf1tKYKcg

Riding Lightning Rod in the rain was painful, yes. But I’d do it again in a heartbeat — the ride is that good. 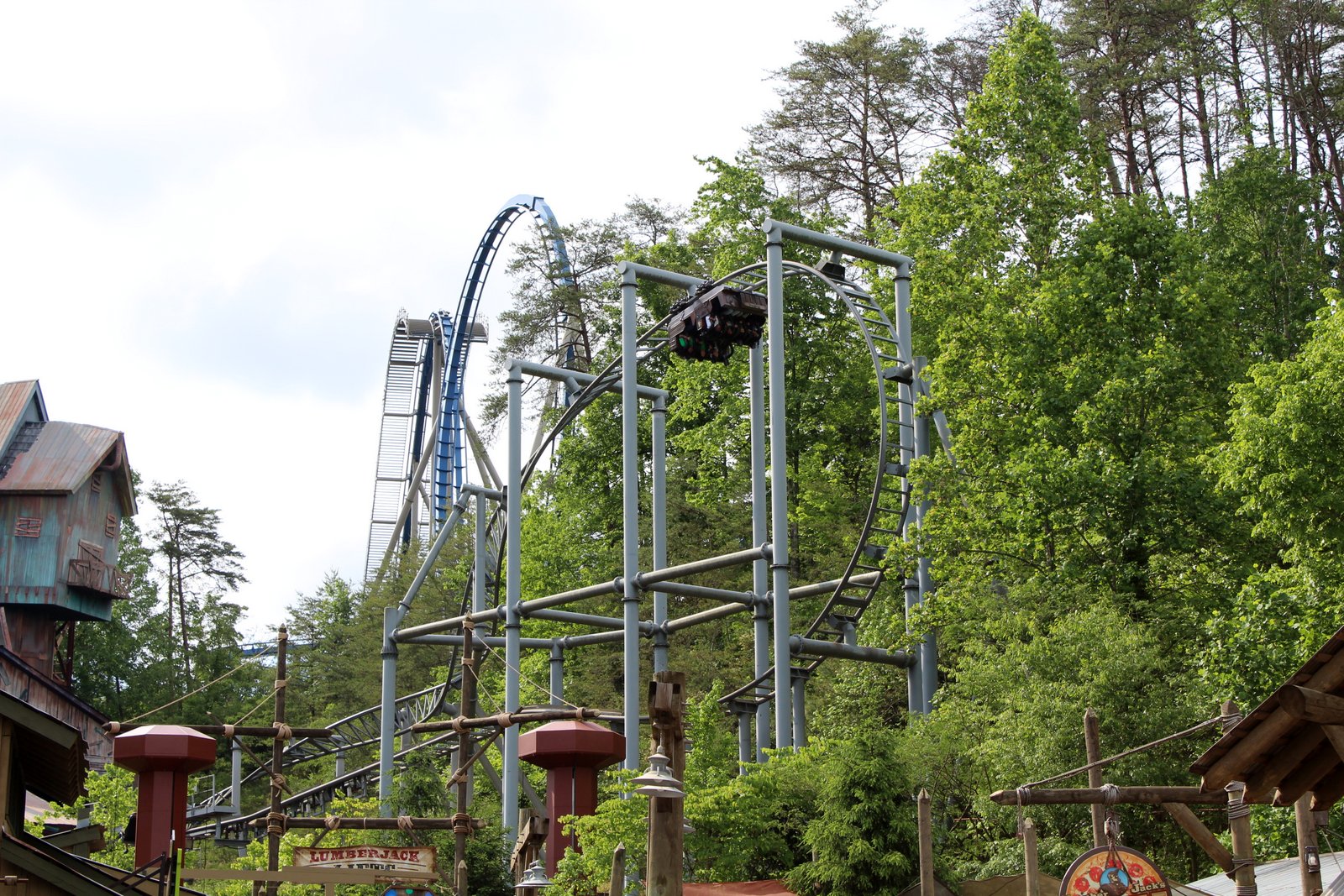 Despite the dreary weather, I was able to get a few rides in on all of the park’s coasters, except for FireChaser Express:

I knew I should have ridden it earlier in the day when I had the chance. 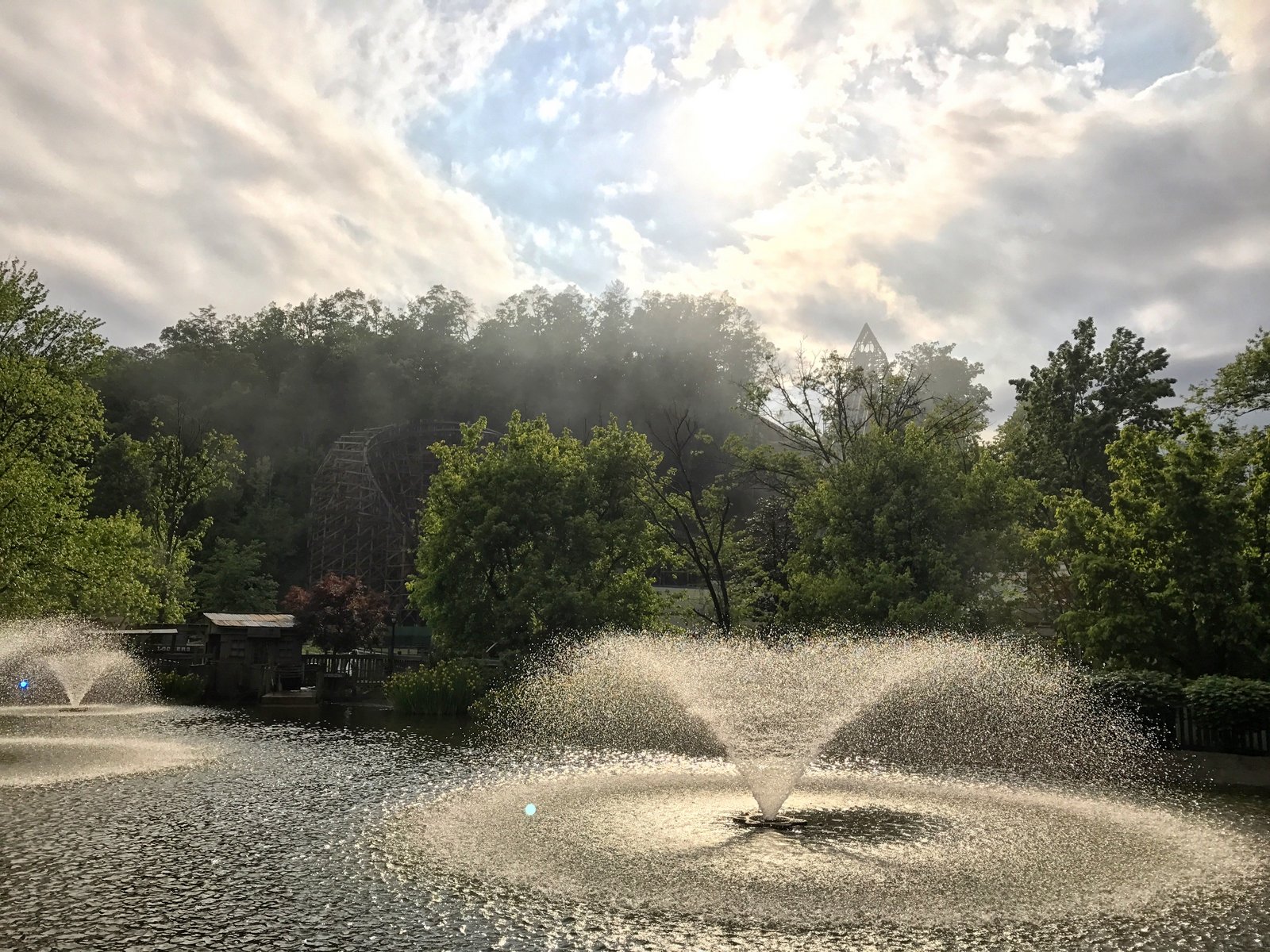 The sun decided to make a last-minute appearance just as I was preparing to return home. So I extended my stay for another hour, enjoying mostly walk-on rides on the park’s (operating) coasters.

Have you ridden Drop Line at Dollywood yet? Share your thoughts about the new drop tower in the comments section below.