Known often for it’s beautiful landscaping (19-time defending Golden Ticket Award Winners), Busch Gardens Williamsburg also has an impressive portfolio of eight roller coasters, including their latest; InvadR. Visiting the park for the better part of the last 15 years, I’ve enjoyed countless rides on the park’s coasters, but, in my “quest for coaster knowledge,” I’ve always wanted to learn more. Luckily, Busch Gardens Williamsburg has the solution for that; the Roller Coaster Insider tour.

This weekend, after years of wanting to experience it, I took the tour. The park’s website brands the Roller Coaster Insider tour as an opportunity to “Get some special ride time on five of our incredible roller coasters and go home with some behind-the-scenes perspective, and also visit coaster maintenance areas and speak with our mechanics about everything they do to keep these amazing scream machines rolling.” With a description like that, I was sold.

(Note: the experience I’m about to describe is the “Observer” tour. We had signed up for the “Participant” tour, but due to an unforeseen issue with Griffon’s maintenance lift on Saturday morning, we were unable to head to the top of Griffon for panoramic views of Busch Gardens and the surrounding area.) 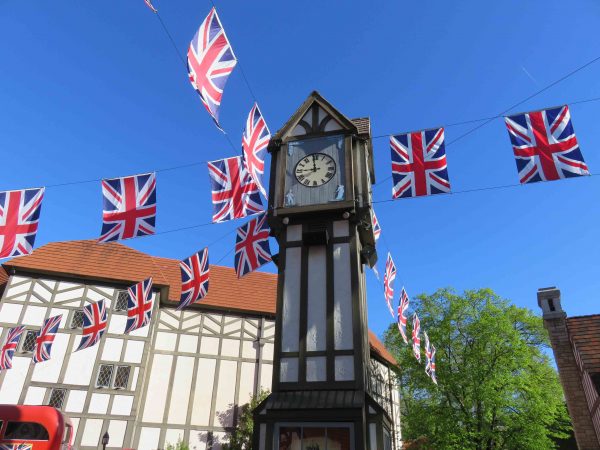 I arrived early at the park and met my tour guide, Ben. Originally from North Dakota, Ben had lived in Williamsburg for a majority of his life, and had worked at Busch Gardens for a little over a year, working in various roles in the park, including area hosting, ride operations (he worked Busch Gardens Williamsburg’s Skyride) and VIP tours. He really knew his stuff when it came to Busch Gardens’ coasters, and was a huge help all day.

Ben told me that the tour typically maxed out around 18 people, and usually averaged 8-12 participants. Our tour group was only five; Rebecca and Jimmy from North Carolina, Nicole and Scott from Long Island, and me. 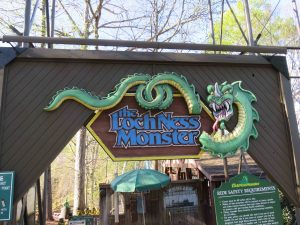 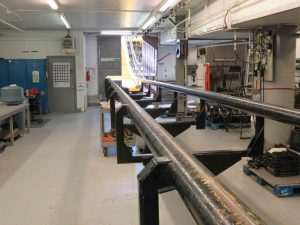 Our tour began in the maintenance bay of Busch Gardens Williamsburg’s oldest roller coaster, Loch Ness Monster. One of the first things we saw was the original Arrow Dynamics Blueprints for the coaster, still with their original coffee stains, and took up a large part of the back wall of the maintenance area. (The blueprints were the only thing on the tour that we were not allowed to photograph.)

We learned how gravity played a big role at Loch Ness Monster, because of the original technology used behind the ride, which is celebrating is 40th birthday next year. In order to service the trains, they would move on a transfer track, and then roll underneath the station using gravity. Additonally, we got a brief education about anti-rollback devices, and how they functioned. 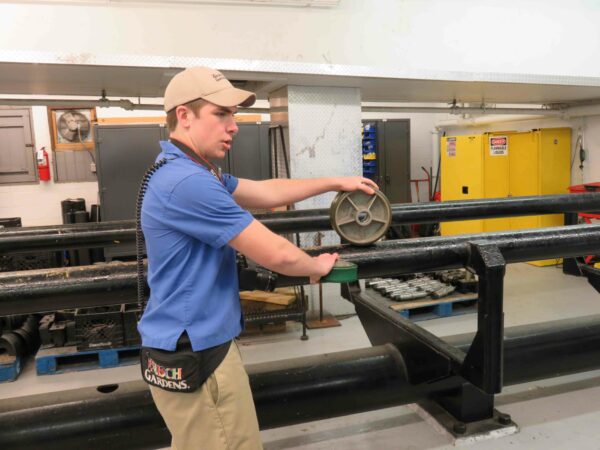 Ben also told us about the different types of roller coaster wheels — road wheels, guide wheels, and upstop wheels, and their various functions. It was interesting to me that Loch Ness Monster used flat-surfaced wheels, while many modern wheels have a concavity in order to grip the track better. 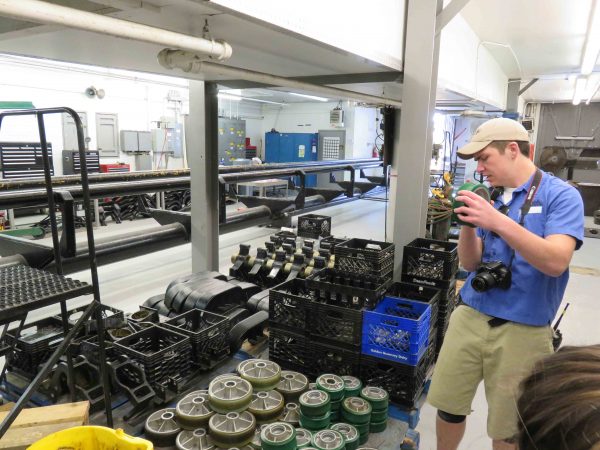 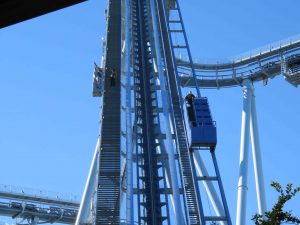 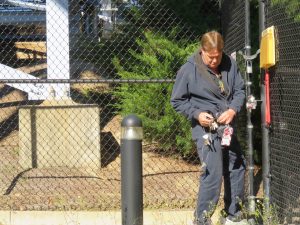 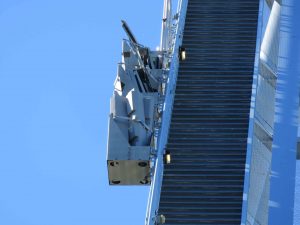 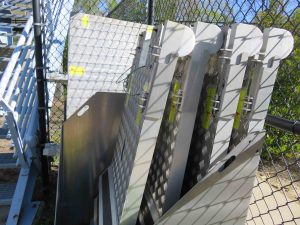 We walked underneath the Busch Gardens Railroad to take a few photos of Griffon’s lift from ground level, and then headed towards the maintenance area for Griffon, where we saw a Lock-Out, Tag-Out taking place, and Ben told us how that if the gate was open, the coaster would not operate. We also got a look at the pieces that would be assembled to make a floor for Griffon (a floorless dive coaster), in the event of an evacuation.

Because of the earlier maintenance issue, the coaster would have a delayed opening for the day, but it also allowed us to see one of Griffon’s trains moved from the bay onto the transfer track, and on to the regular track.

There was more education about wheels (Griffon uses wheels that “hug the track” a little better than flat wheels), and also about how Griffon’s water brakes work. We also learned about the two sets of “chain-dogs” on Griffon, the ones built in for the ascent up Griffon’s 210′ tall lift hill, and also the ones that simulate the pause at the top of the hill before the drop, which is actually just a very slow moving chain. 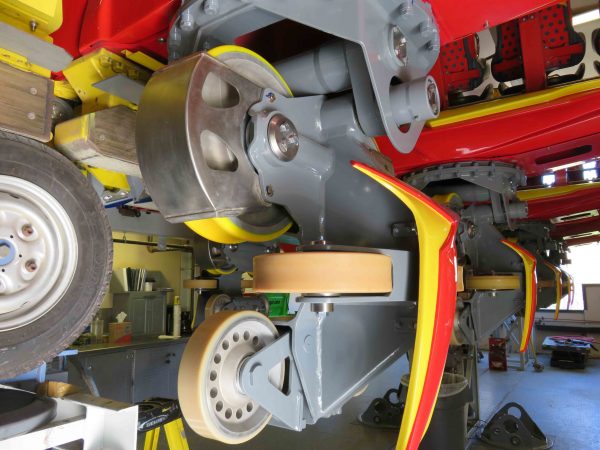 Ben told us how when Griffon was being built, Busch Gardens Williamsburg wanted a higher capacity for Griffon than SheiKra, but in order to make the weight distribution work, the floors would have to be removed for the trains. When Busch Gardens Tampa later removed the floors on SheiKra, counterweights had to be installed on the trains in order for the coaster to continue to function properly. 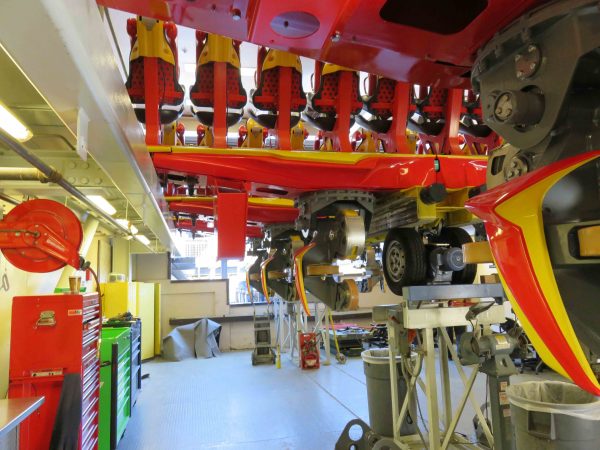 One of my favorite random facts from this tour came in the Griffon maintenance bay, where I learned that one row of Griffon’s train weighed more than an entire train from Loch Ness Monster. 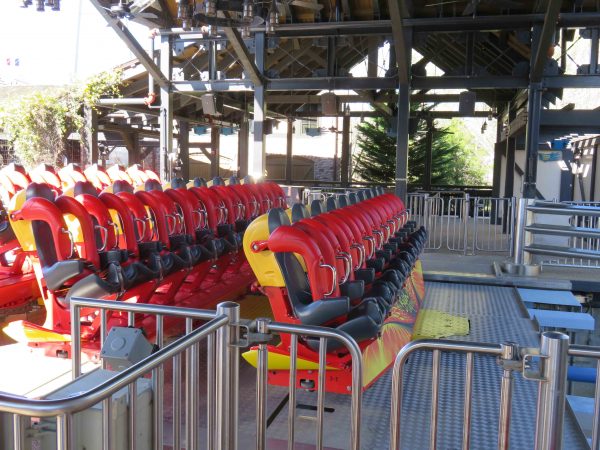 Arguably the best perk of the roller coaster insider tour were two back-to-back rides each on the five featured coasters, with a row choice. We got to be on the first public rides of the day for Griffon, sitting front row each time. It had been a long time since I had sat in the front row of Griffon, but it’s a crazy feeling watching the track fly by under your feet. 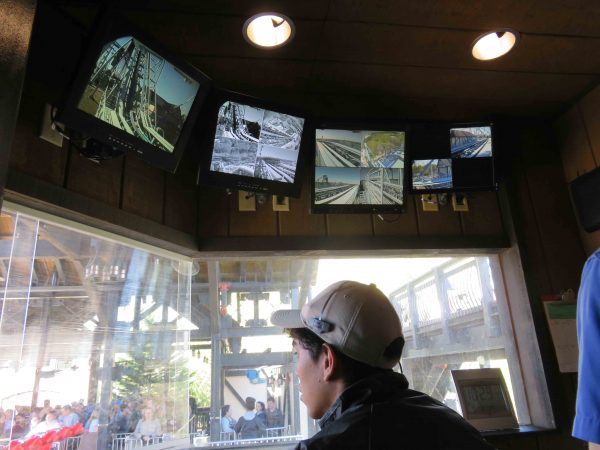 After riding Griffon, we got to see inside the ride’s control room, with the control panel and various screens monitoring the ride’s activity. Having never seen a control room up close, this was another great “coaster nerd” moment of the tour. 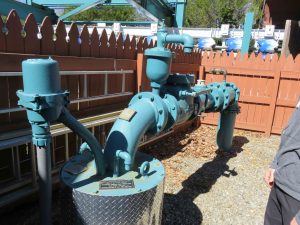 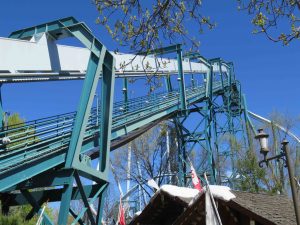 We headed to our next coaster, Alpengeist, where we learned that the station had to be specially built around the well for the Le Scoot log flume, which is some 500′ deep. This is also why that the supports for Alpengeist’s lift are atypical from other B&M Inverted coasters. 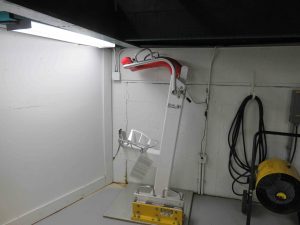 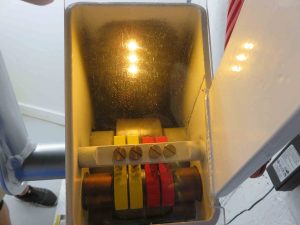 In the Alpengeist Maintenance bay, we saw a demonstration of how B&M over-the-shoulder restraints work and are locked in. We also met a ride mechanic (I forgot to write this gentleman’s name down) who had worked at Busch Gardens Williamsburg since 1990 after serving as a mechanic in the Air Force. He answered questions we had about Alpengeist as well as the restraint systems.

Following two back-to-back rides on Alpengeist (seriously, this coaster is 20 years old, and is still one of the best B&M inverts I’ve ever ridden), we made our way through Germany towards Verbolten. While en route, Ben stopped us, and pointed out a small Easter Egg located on a building between New France and Germany. There is a cutout of a man enjoying a nap on one of the beams of the building. The man has a red soda can balanced on his knee, in an obvious reference to the park’s beverage sponsorship with Coca-Cola. 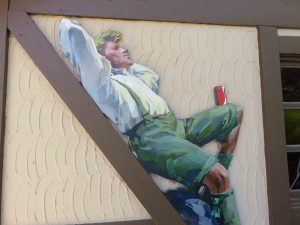 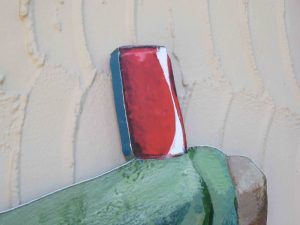 However, as Ben pointed out, the can is red on the front, but is blue on the side, left over from Busch Gardens Williamsburg’s beverage sponsorship from Coca-Cola competitor, Pepsi.

Unlike Griffon and Alpengeist, we rode Verbolten first before going “behind-the-scenes,” in an effort to not spoil the “surprise” element inside of the coaster’s show building. I’ve been on Verbolten countless times, and knew it was coming, but it was funny seeing three of the first-time-riders in our group (one knew it was coming) experience the drop track.

A look at Verbolten's drop track on the monitors in the control room. They use thermal cameras in the dark! pic.twitter.com/4WAKjBPpZv

Inside the Verbolten Control room, we got to see the drop track in action. Busch Gardens Williamsburg uses thermal cameras in the ride’s darker scenes in order to make sure everything is running smoothly. 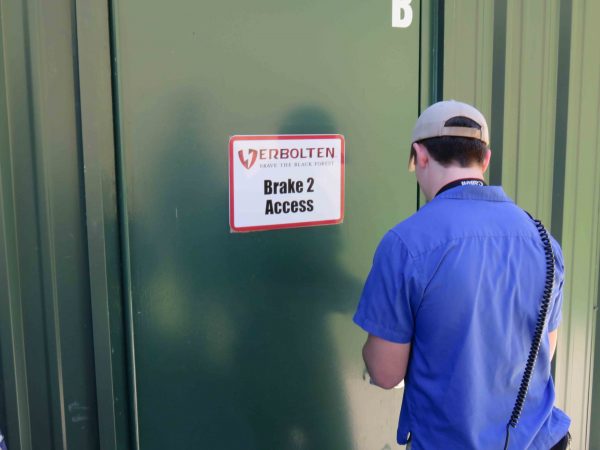 Then, it was time to enter the Verbolten show building. No pictures were allowed inside, but we got to see multiple trains zooming through the building in the dark, and learned that all of Verbolten’s show scenes were painted on curtains that were activated by different lights. There are three show scenes inside Verbolten’s ride building, the storm, the spirit, and the wolves (a nod to Big Bad Wolf, the Arrow suspended coaster that sat on the site of Verbolten), and they all rotate. 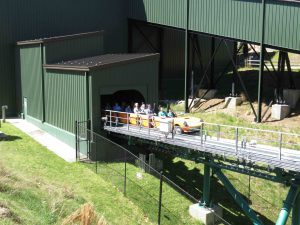 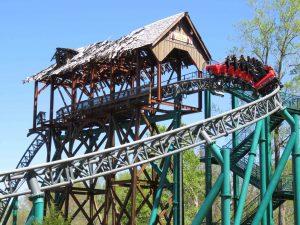 We got to walk behind Verbolten’s show building, and see the second launch in action, and also take a few photos of the structure housing Verbolten’s big drop over the Rhine River. Ben mentioned to us that the roofer who installed the shingles on this building said it was the most difficult job he ever had. 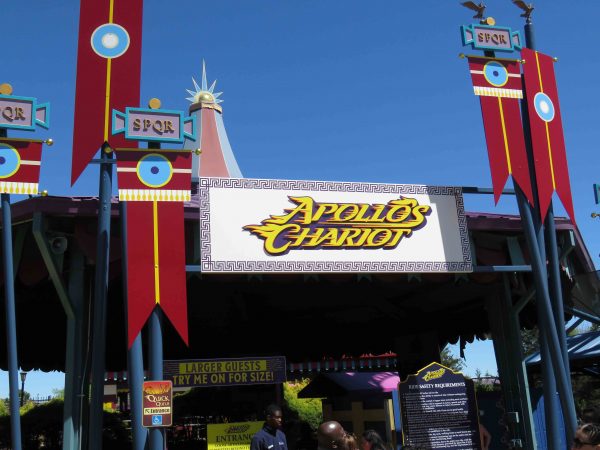 It was time to ride Apollo’s Chariot, Busch Gardens Williamsburg’s lone hypercoaster. This coaster is one of my favorites, and has been in my personal top 5 for years.  I had a ride in the front row, and it was amazing as always. I passed on a second ride because after two rides each on Griffon, Alpengeist, and Verbolten, coupled with the ride on Apollo in quick succession, I was starting to “feel it” a little bit. Not wanting to be “that guy,” I sat out the second ride, because I knew there was one more coaster left to ride as part of the tour. 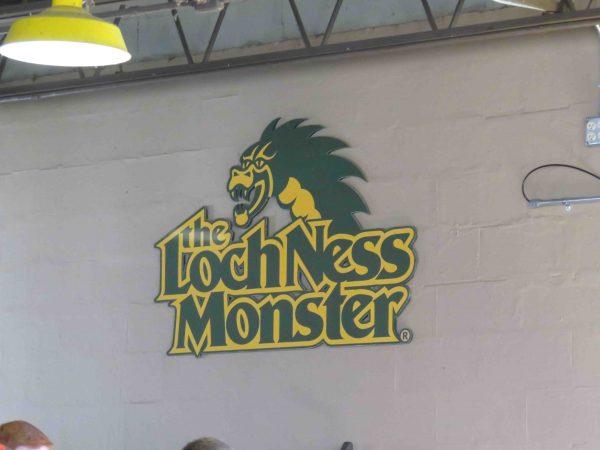 We ended the tour where we began, at Loch Ness Monster, where it was time to get our fifth coaster of the day. Continuing the trend, I was in the front car, second row, and rode Loch Ness only once as well. While waiting on the group to come back after their second ride, I was able to take a few photos of Griffon’s second drop, from an angle that I typically wouldn’t have gotten otherwise. 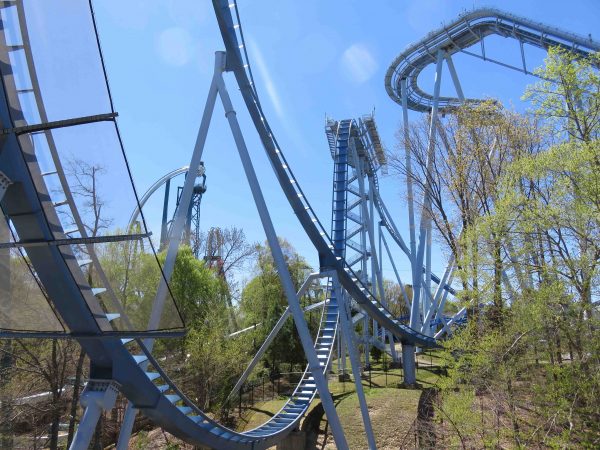 To end the tour, we were presented with a one-time quick queue for Tempesto, which is not part of the Roller Coaster Insider tour due to capacity concerns. Being InvadR’s opening weekend this weekend, we did not receive a Quick Queue for InvadR, but it may happen on future tours. We also received a Photo CD as part of the tour with pictures of the day’s events. (I had to head home before the CD was ready, but will update this post with photos from the CD once I receive it.)

As a parting gift, a single use Quick Queue for Tempesto! pic.twitter.com/tg1ideGgTm

In quick summary, the Roller Coaster Insider tour is an amazing tour to take if you’re a roller coaster fanatic, or just want to learn more about Busch Gardens’ impressive catalog of roller coasters. Even for someone who has been coming to the park for more than a decade, the tour was incredibly informative, and I walked away with a new knowledge and appreciation of Busch Gardens’ world-class coasters. 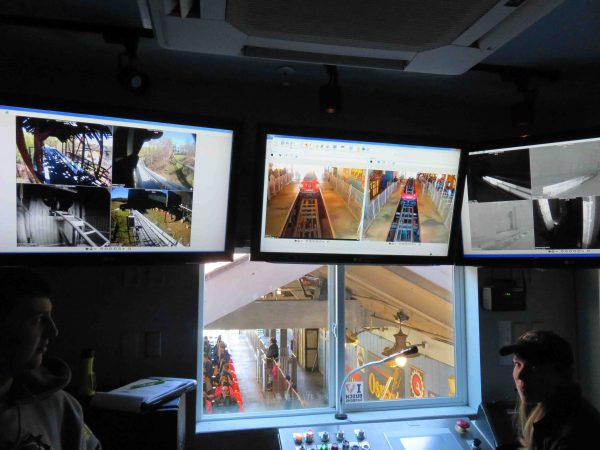 As of this posting, the Roller Coaster Insider Tour at Busch Gardens Williamsburg takes place on Saturdays through Memorial Day, and Wednesdays & Saturdays from May 31-September 2. The “Observer” cost is $50 per person, and the “Participant” Cost is $75.00 per person. You must book a minimum of two people in a party. The difference in the two tours is ascending Griffon’s lift hill in the maintenance lift. For more information, visit Busch Gardens Williamsburg’s website.