First on the list is “Eye of the Storm,” a Larson “Giant Loop” thrill ride which has become one of the most popular flat rides in recent years, especially at the Six Flags parks.

The ride’s iconic loop structure stands 73 feet tall and seats 24 riders, seated back-to-back. The ride will rock riders back and forth before completing 360-degree loops both forward and backward. 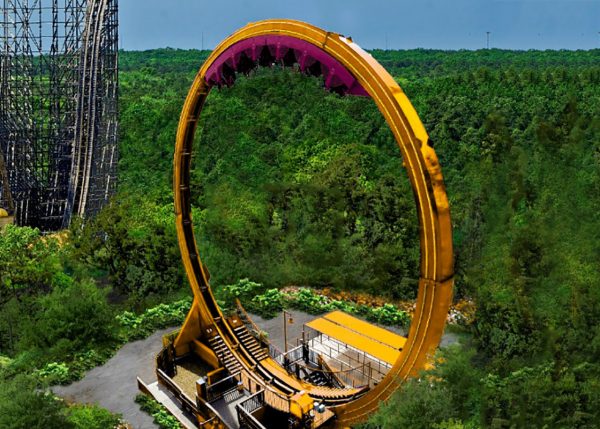 Eye of the Storm brings the park’s total ride count to more than 80, which includes five roller coasters, 20 water rides and a large selection of children’s rides.

While no new coaster will open at Kentucky Kingdom in 2017 (which is understandable, considering the awesome addition of Storm Chaser in 2016), the park’s Thunder Run wooden coaster will receive some TLC.

The coaster will receive a new train and track modification, representing a more than half a million dollars of improvements.

Bill Hargrave, Kentucky Kingdom’s vice president of construction said: “This new train replaces the original Thunder Run train first put into service in 1990. With its advanced technology, the new train, together with the track improvements, will give coaster enthusiasts a smoother and faster ride.”

Unfortunately, no specifics about the train style or the extent of track modifications were disclosed with the announcement.

If these 2017 investments weren’t enough, the park is also enhancing the guest experience by adding the following:

“Last year, we completed our initial three-year development plan and attendance rose to approximately 800,000, representing a 60% increase over attendance at the time the previous park closed (in 2009)…we’ve spent a total of $54 million over the past three years. That’s $10 million more than the amount we committed to spend. Now we are ready for round two – a second three-year development plan, with the goal of achieving at least one million visits.”

He continued: “Our approach has always been the same: to add new attractions for every age and thrill level, provide outstanding guest service in a safe and friendly environment, and offer prices the average family can afford.”

What do you think of Kentucky Kingdom’s plans for 2017? Share your thoughts in the comments section below.