I had a blast attending and presenting at Minefaire, a massive Minecraft inspired fan experience. You can read more about what there is to see and do at Minefaire here. So what does this have to do with coasters and theme parks? This post is basically going to be a written, condensed version of the Minecraft roller coaster presentation I was invited to take part in.

The most impressive Minecraft roller coaster videos I’ve seen are built by Nuro and River. These are built on the Xbox 360 version of the game , meaning each block is placed one by one – no automatic building tools are used. They start by choosing a song and then match the key moments on the track to time up with key points of the music. Working an hour or two per night, it may take around three months to build one coaster. Here are a few examples of awesome Minecraft roller coasters from our introduction video:

Building a realistic roller coaster in Minecraft is difficult. If you’re going for 100% realism or want to do a recreation of a real roller coaster with insane loops and inversions, you’d be better off using other software, such as NoLimits2, RollerCoaster Tycoon World, or Planet Coaster. Where roller coasters in Minecraft really excel are in telling stories.

In this Minecraft track, Nuro and River tell the story of the original Ghostbusters movie:

Rather than loops or impressive statistics, good Minecraft coasters use unexpected surprises, optical illusions, and other tricks to entertain the “riders.” And the same type of tricks are used in real life roller coasters. Designers are always trying to surprise the riders and keep them guessing as to what is coming up next. I’m going to give you a few examples from real life theme park attractions.

Nuro and River often get requests from their fans asking to download their Minecraft roller coaster maps. However, what most of their YouTube subscribers may not realize is what you see in the map is not exactly what you would expect. For example, when you see a detailed building from sitting in the minecart, if you were to get out of the car and walk around to the back side of the building you’d be shocked to see it is not complete. The building is just a facade or a movie set, only meant to be viewed from one angle. It would take too much time to create the full buildings.

An example of this can be seen on Expedition Everest at Disney’s Animal Kingdom. From inside the park, the front of the mountain looks incredible. 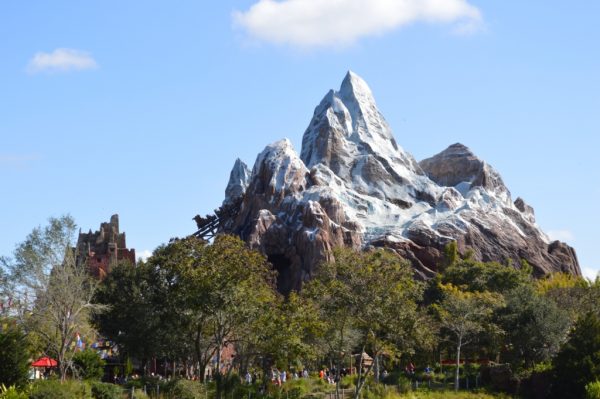 Thanks to Google, we can see what the back looks like – a plain, flat boring building. In 2005, Expedition Everest cost over $100 million to build and would’ve cost even more to theme it all the way around. 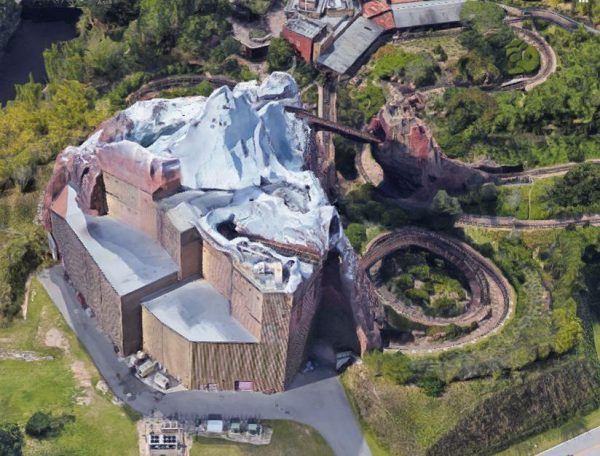 In Minecraft, you can have your minecart drop off of one track and physically freefall onto another track below, enabling crazy and unpredictable rides. In real life, the car can never leave the track but there are five coasters around the globe that feature a freefall drop track element, including Darkmare at Cinecitta World in Rome:

Or Thirteen at Alton Towers:

Optical illusions are used in Minecraft, such as the exploding Marshmellow Man in the Railbusters video. One of the oldest and most common optical illusions in the world of theme parks is called “Pepper’s Ghost.” The newest (and maybe best) take on this can be seen in the new Pirates of the Caribbean ride at Shanghai Disneyland.  While the Jack Sparrow AA (which is there the whole time) is in the dark, a pane of glass hidden by the set design of the ship reflects a real skeleton that is being lit but is hidden out of sight of the boat passengers. As the light is turned off on the real skeleton, the reflection disappears and the light on the AA is turned on. In between, some projections are shown on the AA to make the effect more magical. So you have a couple of elements working together to make a really cool effect, just like you might play with the lighting and set design in Minecraft.

These are just a few examples of how ideas used in Minecraft roller coasters are applied in real world theme park design. I hope these examples inspire your future Minecart creations!

You can download a copy of the PowerPoint presentation here. Do you play Minecraft? Have you ever built a Minecraft roller coaster?