Six Flags Fiesta Texas announced Thunder Rapids as its new addition for 2017. This 924-foot-long water coaster features an advanced loading system that allows guests to quickly and easily board their water ride vehicle at ground level from a moving station. Guests then ride up the lift hill to the top of the slide – eliminating the need to carry tubes. This new water coaster will be positioned in White Water Bay, Fiesta Texas’ water park (included with admission). 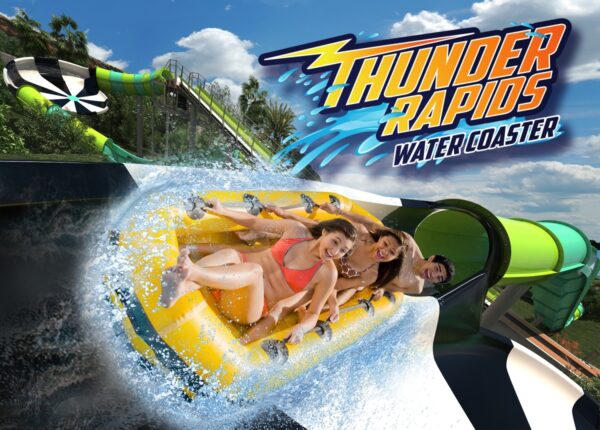 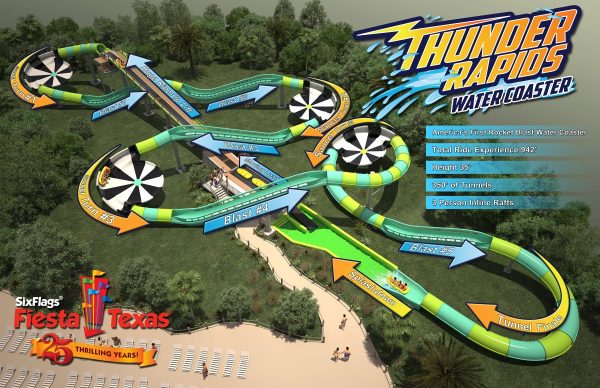 First-of-its-kind in the US Water Coaster

Thunder Rapids is a Proslide Technology creation and Six Flags is touting the new water coaster as the first-of-its-kind in the United States. But what do they mean by first of it’s kind? There are plenty of other water coasters in the U.S. Let’s quickly look at the evolution of Proslide’s water coaster technology. They began by experimenting with conveyor belt systems to get the rafts uphill, as can be seen on Typhoon at Six Flags New England. 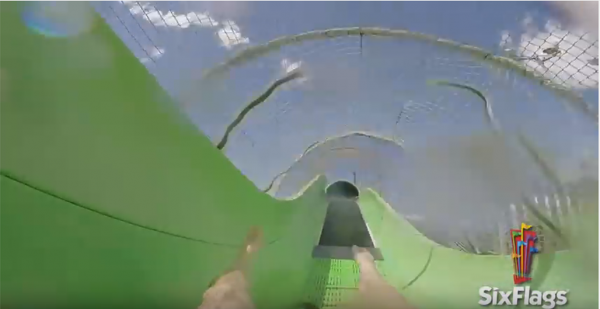 Next, the ProSlide Rocket water coasters, starting with the Super Tubes Hydrocoaster at WhiteWater World in Australia, have used the ProSlide HydroMagnetics system of Linear Induction Motors (LIM) placed throughout the ride to launch riders up the uphill sections. This is similar technology used in launch coasters. ProSlide Rockets with HydroMagnetics became the first waterslides to use LIM technology and the lack of moving parts allows for more flexibility and efficiency in running the waterslides’ uphill sections than the previous conveyor-belt system did. Mammoth at Holiday World is currently the world’s longest water coaster and it uses electro-magnets to propel those mammoth rafts up hills like magic.

And now we get to the latest evolution of Proslide’s water coaster, the RocketBlast. According to Proslide’s website, the lessons learned from the LIM water coasters is mixed with turbine technology to take water propulsion coasters to a whole new level: 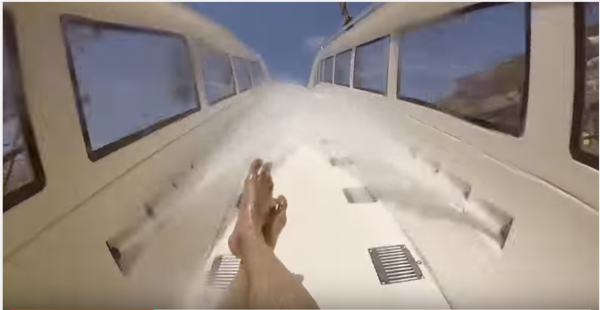 Thunder Rapids at Six Flags Fiesta Texas will be the third Rocket Blast installation in the world (Singha at Siam Park in the Canary Islands and Tsunami at Super Aqua Club near Montreal), but will be the first in the United States.

In other park news,  Six Flags Fiesta Texas has named marketing director Jeffrey Siebert as its new park president, the company said Thursday. Siebert replaces Neal Thurman, who has left San Antonio to fill the park president position at Six Flags Great Adventure & Hurricane Harbor in New Jersey. That position had previously been held by John Fitzgerald for the last several years. Jeffrey is well known and liked in the industry. He once made a hilarious “The Office” parody promotional video that I can’t seem to find online anymore (if you have the link let me know). We can’t wait to see the park’s future under Jeffrey’s guidance!

Are you looking forward to riding Thunder Rapids? Did you enjoy our little history lesson on water coasters?