Valleyfair announced today that they will be replacing their former Enterprise ride with a 230′ tall Star Flyer ride, to be named “North Star,” for the 2017 Season.

Named to celebrate the region’s affinity to being “up north” and the great outdoors – is a 230-foot-tall tower that will spin riders more than 20 stories above the ground. Seated in two-person chain-link swings that will allow their feet to dangle, riders will slowly begin rotating in a circular motion reaching speeds of up to 40 mph as the swings ascend and descend the tower.

“The annual trip to Valleyfair has always been a family tradition in Minnesota,” says Dave Frazier, Vice President and General Manager of Valleyfair. “The addition of North Star certainly adds to the continued commitment to provide lasting family memories for our guests.” 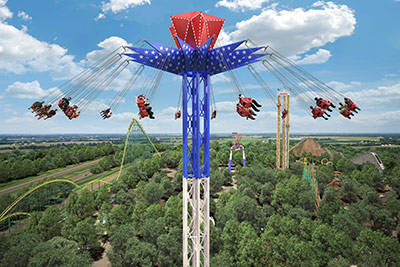 North Star will rank as the second tallest ride in the park next to the 275-foot Power Tower and will occupy the spot soon-to-be vacated by Enterprise, which will be retired later this month. The location positions North Star at the front of the park where, living up to its name, it will serve as a beacon to guide and greet guests on their journey to the park.

Manufactured by Austrian-based Funtime, North Star is the only ride of this type in the upper Midwest. Construction will begin this month and be complete by early to mid-December. The ride will open to guests in the spring of 2017.

Have you ever been on a Star Flyer? Do you think this is a good addition to Valleyfair? Let us know in the comments below!