Secrets Behind Frozen Ever After

Epcot’s new Frozen Ever After attraction opened to huge lines this week. According to the Twitterverse, the line was over five hours long within an hour of opening.

Walt Disney Imagineers re-imagined Maelstrom, the tired boat ride that anchored the Norway pavilion, into a magical new experience. Frozen Ever After uses a combination of physical sets, audio-animatronic (AA) figures, and projections to bring the hit movie to life in a new and exciting way. How does Frozen Ever After compare to Maelstrom and does it follow the same ride path? Read on to find out!

Spoiler Alert: If you don’t want to know how the magic is pulled off or ruin any of the ride’s surprises then do not read this. Disclaimer: I do not have any inside sources. Based on my observations of YouTube videos and information found through Google.

Maelstrom vs Frozen Ever After

Let’s take a look at some of the differences between the original Maelstrom ride at Epcot and the new Frozen Ever After overlay. The original attraction opened on July 5, 1988, in the Norway Pavilion of the park’s World Showcase section. The 964 foot long ride featured a backwards segment and a 28 foot drop. Maelstrom’s final day of operation was October 5, 2014. Take a ride by watching this Maelstrom POV video shot in 2007:

Here’s an overhead picture of the Maelstrom layout. Take note of the separate load and unload areas. The second track switch area was opened up so you could get a glimpse of the boats from outside the building. 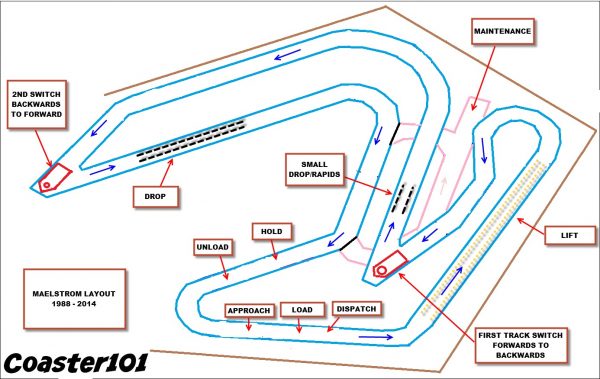 After twenty months of construction, Frozen Ever After opened on June 21, 2016 to huge crowds. The previous post-show theater has been removed entirely for the addition of a huge inside queue filled with incredibly effective lighting and architecture that immerses guests in the courtyards of the fictional kingdom of Arendelle. The hole in the building has been filled in so you can no longer see the boats from outside. View the Frozen Ever After POV video below to see how different it is from Maelstrom.

The ride path is exactly the same with the exception of the former load station. As you can see by comparing the layouts, the track has been lengthened slightly by eliminating the separate load and unload areas found on Maelstrom. The Frozen Ever After layout is shown below: 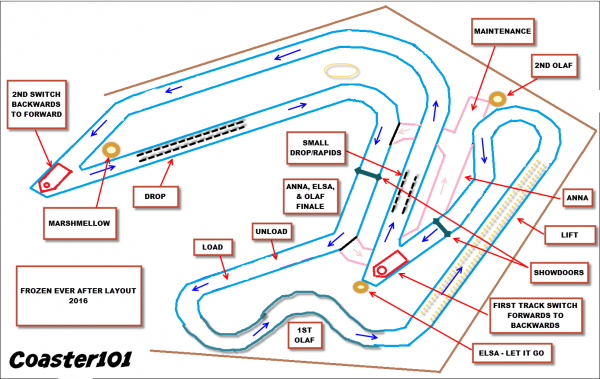 Maelstrom’s ride time was around four minutes thirty seconds. The Frozen Ever After ride time has been extended to about five minutes or more thanks to the additional pre-lift scenes. If you want, here’s a side-by-side comparison video of both rides at once.

It seems like the Frozen boat ride operates on a block system where the boats can be stopped at several locations throughout the ride and only one boat can enter a block at a time, much like a typical roller coaster block system. This prevents two boats from bumping into one another and to help synchronize the boats to the show scenes. You can see one of the devices that is used to stop the boats in this screenshot from a Frozen ride breakdown video. 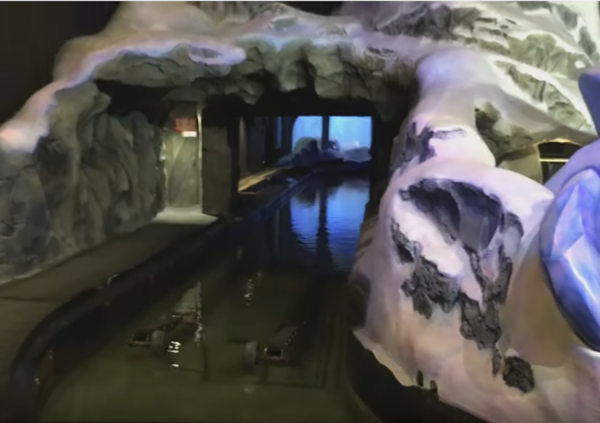 No Frozen attraction would ever be complete without a lengthy segment featuring the smash hit “Let It Go.” As we discussed in our breakdown of how Shanghai Disneyland’s Pirates of the Caribbean works, one of the challenges of themed attraction design is how do you keep the guests within a scene for more than a few seconds when you’re traveling in a constantly moving vehicle like a boat? The answer for Frozen Ever After is the track switches that were also used on Maelstrom. There are two horizontal rotation track switches to transition the boats from forwards to backwards and vice versa.  The process of switching from forwards motion to backwards motion takes time, allowing the boats to enjoy the Let It Go scene a little longer than the other static displays you quickly float by.

Disney has proved once again that they’re still the best when it comes to audio-animatronics. Micro projectors inside the AAs map content to a mold of the character’s head. The facial expression of Anna and Else seem even more life like than ever before. The face projections are similar to the dwarfs in Seven Dwarves Mine Ride but look even better here, like the animated characters have sprung to life. What does it look like when the animatronics in Frozen break down? Take a look at this video posted to Facebook to see the Elsa figure’s projection face messed up:

It also appears as though they’ve taken their incredible AAs and put them on movable bases, like a CNC machine or robotic arm turned upside down (and hidden out of sight).

Here is a picture of the Olaf AA with the lights on taken from this video: 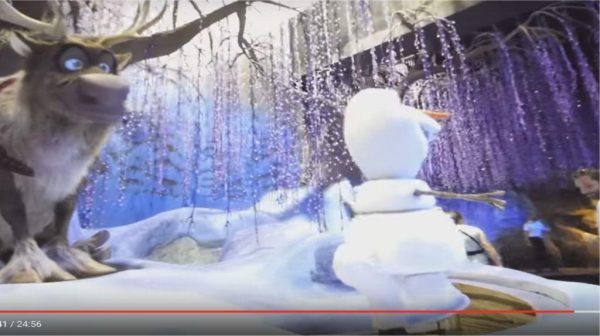 How big is the drop on Frozen Ever After?

The stat I heard was 28 feet but that sounds bigger than it looks (with the water turned off): 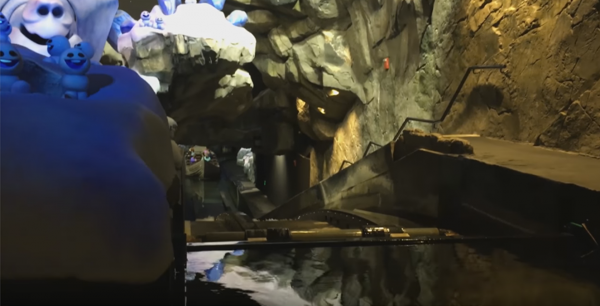 Is the Frozen Ever After capacity too low?

The biggest complaint about Frozen Ever After is the wait time. According to Hidden Magic in Disney, Maelstrom’s Theoretical Hourly Ride Capacity (THRC) was 1,000 people per hour (PPH) with am Operational Hourly Ride Capacity (OHRC) of only 900 PPH. That’s not good. In a 12 hour day, only 10,800 guests will get to experience this attraction. If Epcot’s daily attendance is 40,000, only 27% of guests will get to ride Frozen. Even if the capacity of Frozen is a bit better due to adding more boats thanks the slightly longer ride track and increasing dispatch time, it’s still not going to be very good. If they can increase OHRC to 1,500 PPH that’s still less than half the capacity of Pirates and Haunted Mansion (estimated 3,200 PPH). Expect long lines all summer long. Fastpass/MyMagic+ will be the way to go as it was estimated that 75% of its capacity is allocated to Fastpass.

I hope you enjoyed this breakdown of Frozen Ever After. What ride should we analyze next?