After last weekend’s letdown, I was mentally preparing myself for the worst.

Upon entering the park, I once again rushed to the Jukebox Junction area, home to Lightning Rod, the new-for-2016, record-breaking, first-of-its kind launched wooden roller coaster. A mouthful that deserves every title it earns. It’s yet another addition to manufacturer Rocky Mountain Construction’s (RMC) already stellar portfolio. 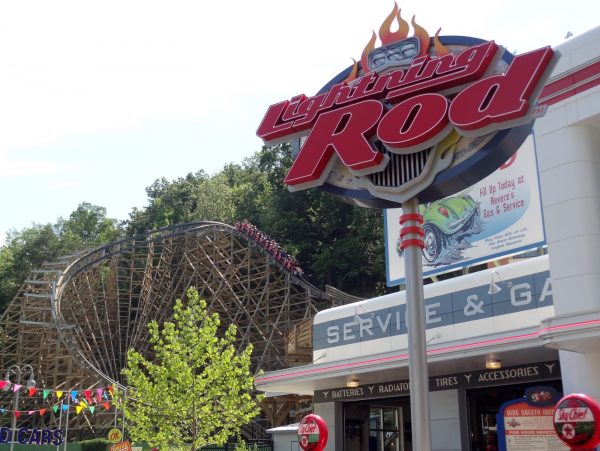 I couldn’t believe my eyes. The coaster was open and accepting riders. I may have jumped out of pure excitement. My heart was racing, my knees trembling. Like many other coaster enthusiasts, I’ve followed and waited (somewhat) patiently to ride Lightning Rod since it was announced last August. Originally scheduled to open in March, it was plagued by delays that lasted through late May when the coaster began “technical rehearsals.” 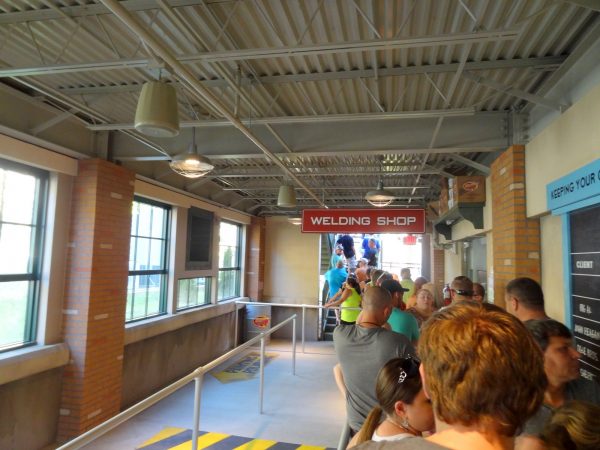 The queue is well themed and on par with many of the park’s other queues. I’m sure there are plenty of Dollywood Easter eggs sprinkled throughout, but my eyes were glued to the building’s many windows, which provide nearly unobstructed views of the coaster’s quadruple down and non-inverting half loop finale (more on those later). 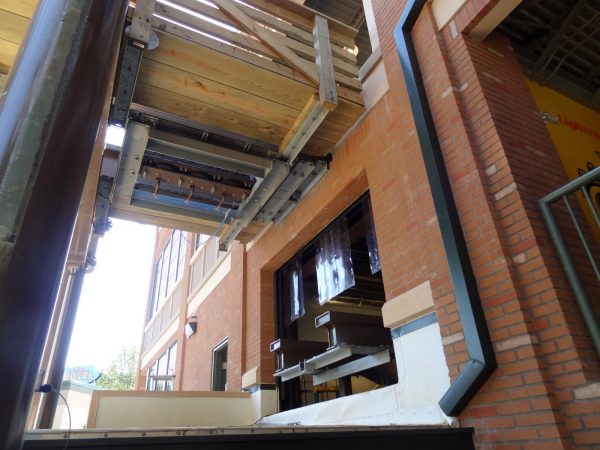 The line moved quickly. Both trains were operating. I was assigned to the first car, second row. I didn’t care where I sat — the burning anticipation to ride trumped any seat preference. 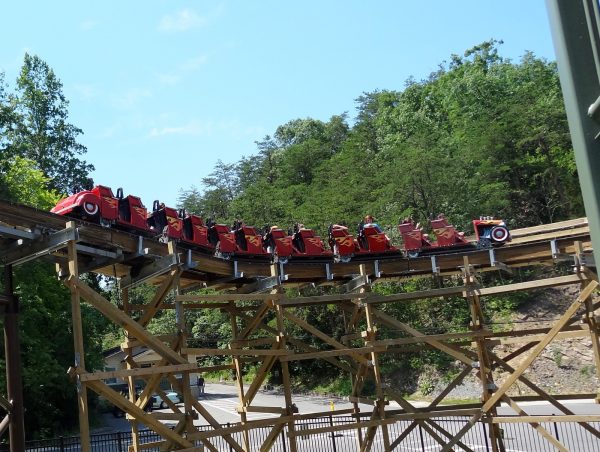 The trains are a work of art. The sleek, hot-rod design goes hand-in-hand with the coaster’s “lightning”-fast speed.

I buckled the familiar RMC seat belt and pulled down the lap and shin bars. The seat was comfortable, but I knew if early reviews of the ride were accurate, I wouldn’t be in the seat much during the 60-second ride.

According to the park, Lightning Rod riders are subjected to 20 seconds of airtime. That means riders are out of their seats for roughly a third of the ride. 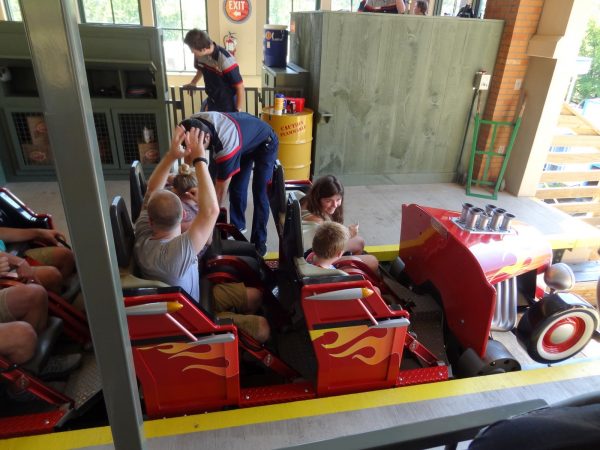 At least eight ride ops were working in the station — it was an all hands on deck operation. I wasn’t counting, but I’d guesstimate that trains were dispatching every 2-3 minutes. All in all, they were working incredibly efficiently for such a new ride.

Unrelenting speed, should-be-illegal airtime and that quad down… Lightning Rod is a roller coaster masterpiece! pic.twitter.com/SKQbHjYpHm

The crowds were electric (I’ll try to lay off on the lightning puns, I promise). Every departing train was coupled with a roar and applause — as was every returning train.

After I heard the “all clear,” we were off. The engine-rev sound effects as the train departs (and launches) are a nice touch.

The turn out of the station is slow. The anticipation built as the train approached the steaming Linear Synchronous Motor (LSM) fins. 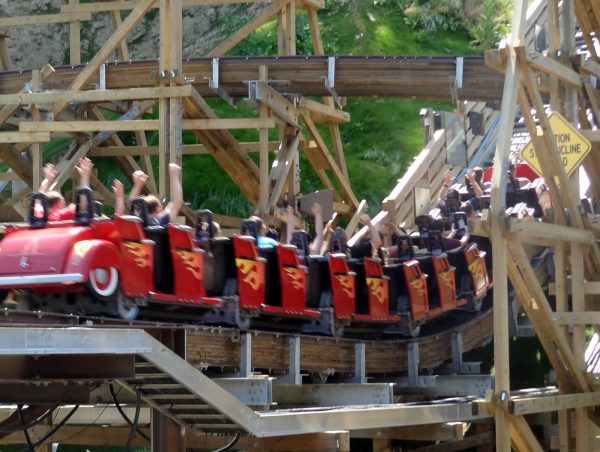 And then the train launched. 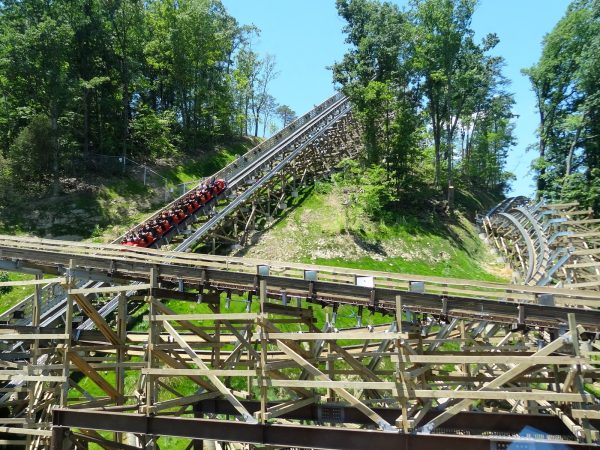 As the train does not fully stop prior to the launch, it’s not as abrupt as a “traditional” launch coaster. 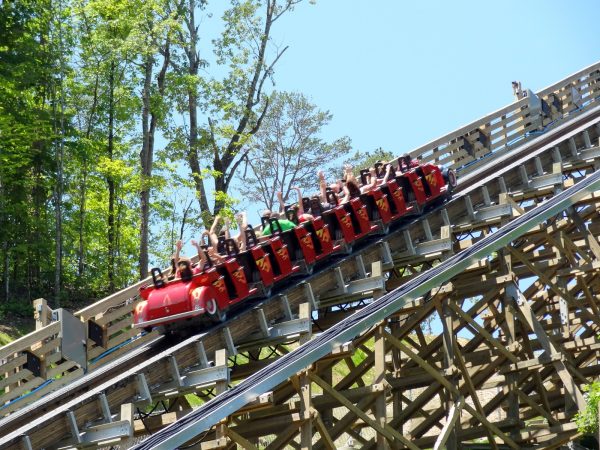 But it is forceful, and it sure beats your run-of-the-mill lift hill. The train was cresting the peak of the 20-story launch hill before I could say “coat of many colors.” 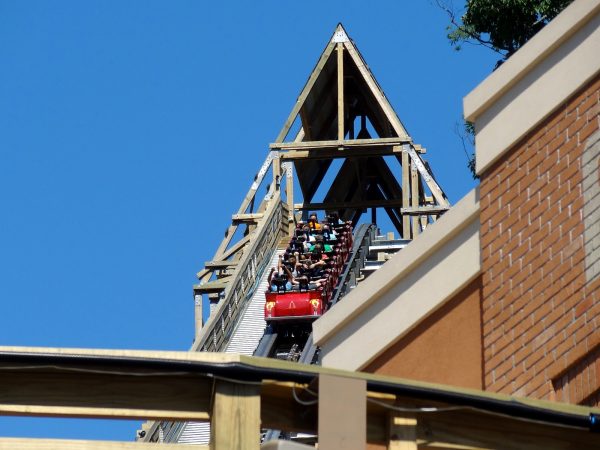 Videos of this coaster do not do the launch any justice. The train does not slow much as it reaches the peak. While it doesn’t crest at 45 mph, you’ll be treated to the first of many glorious pops of air as you pass underneath the pointed roof structure (which is meant to keep bees farther away from the track). 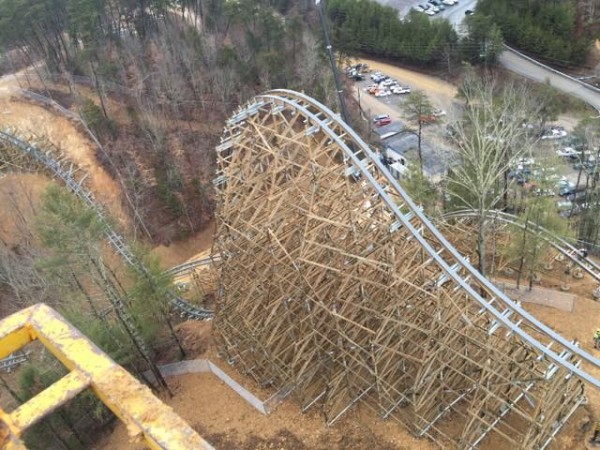 The “fake out” drop will surprise many novice riders. It’s a small taste of what comes next: the 165-foot drop. The near-vertical plunge down the hill is beautiful and exhilarating. The coaster makes incredible use of the hillside terrain, potential that I felt was untapped with the park’s 2012 Wild Eagle wing coaster.

The train reaches its top speed of 73 mph. There’s no second-guessing that this is the fastest wooden coaster in the world. And it feels like the train maintains that 73-mph speed through the rest of the 3,800-foot course. 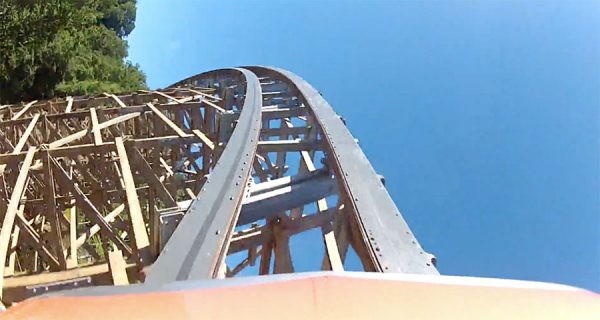 Aside from the brake run, the “calmest” part of the ride may be the breaking wave turn that follows the 165-foot drop, but calling that “calm” is a huge stretch. Personally, I prefer Outlaw Run’s smaller take on the element, but Lightning Rod’s is a very close second. You’re treated to a short glimpse of what lies ahead. 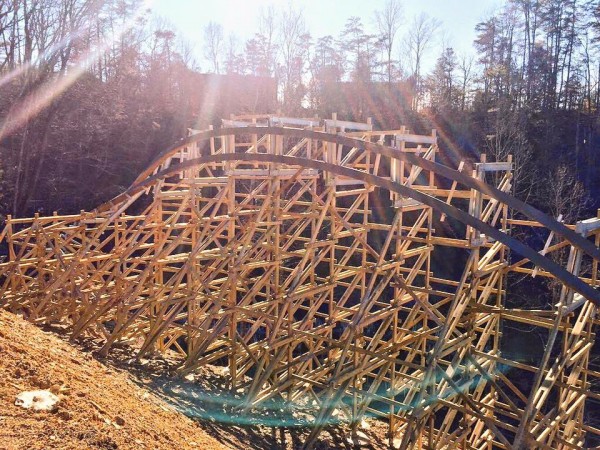 The following 90+ degree outside banked top hat is one of the coaster’s most mind-blowing elements. A day later, I’m still trying to comprehend what’s going on at this part of the ride — it’s that disorienting. 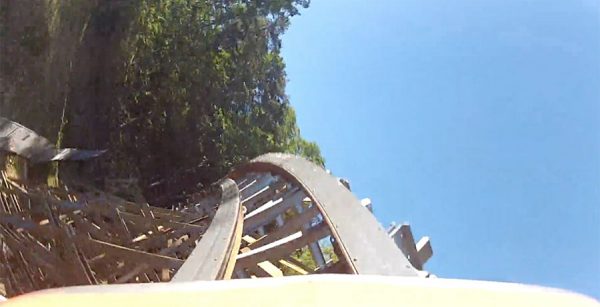 Next, the coaster keeps its blazing fast speed as it enters the twist-and-shout element, which is taken at such high speeds that it’s hard to realize you’re entering yet another element.

Blink and you’ll miss half of the ride. 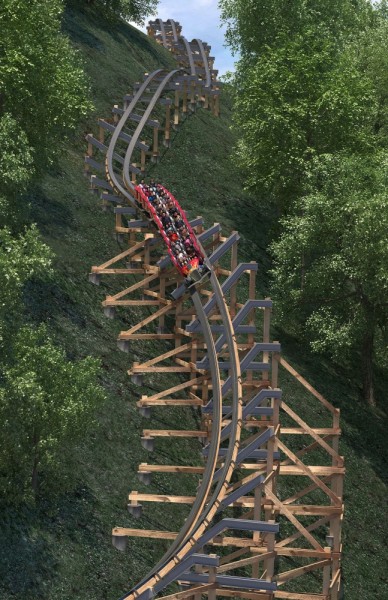 And now for the moment you’ve all been waiting for: the quadruple down (I prefer “quad down”). At this point, you can kiss your seat on the train goodbye — you won’t see it again until you enter the non-inverting half loop. 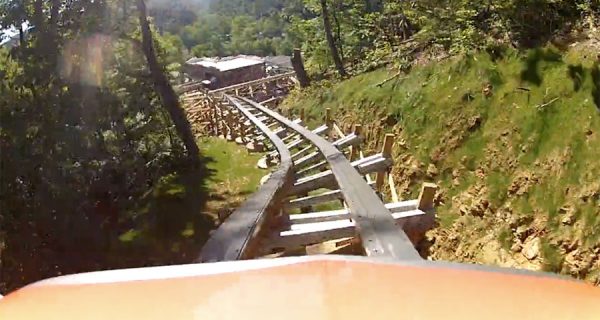 The quadruple down is something that must be experienced firsthand to be fully appreciated. I don’t think there are words that can accurately convey the ejector air that results from this element. You’ll hear the screams of your fellow riders elevate with each plunge. 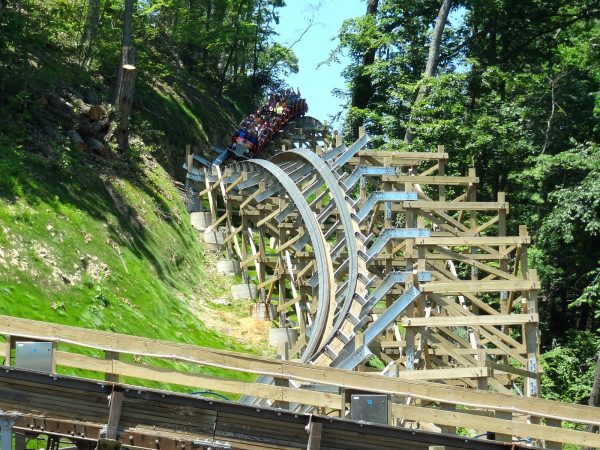 It’s not far-fetched to call the element the “quin down,” as the small hill between the quad down and the non-inverting half loop feels like yet another “down” in the seemingly unending series. 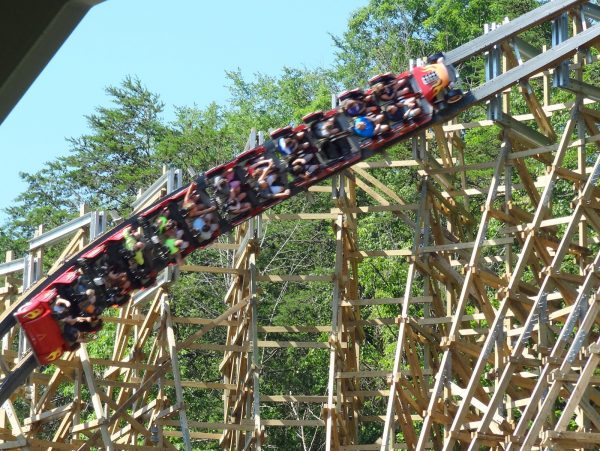 The train enters the non-inverting half loop, which marks the final trick of this masterpiece of a roller coaster. I believe it was meant to burn of some of the train’s momentum — if so, it mostly fails in that regard. And that’s totally fine by me. 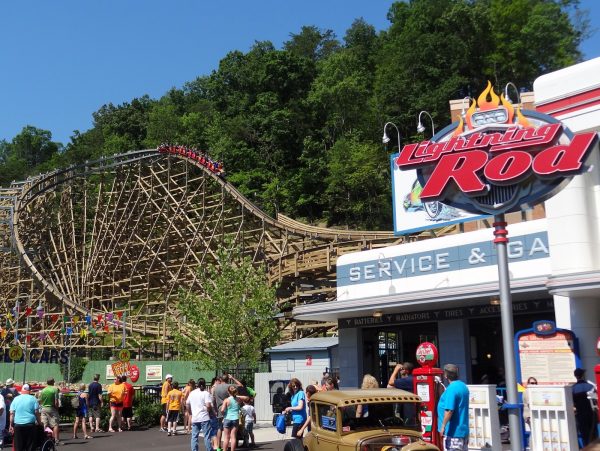 The train plunges into the brake run with plenty of horsepower remaining. A roar of cheers and applause erupted from the train. I may have clapped — I don’t remember. I was mostly speechless, still shaking from the overload of adrenaline pumping through my veins. I couldn’t begin to comprehend what had just happened.

Yet again, Rocky Mountain Construction has redefined everything I thought I knew about wooden roller coasters.

But I was on the fence. Was this the wooden coaster that would dethrone Outlaw Run as my current number one? I don’t think one’s first RMC coaster experience can ever be replicated — I had to take that into consideration.

However, any doubts I had of whether or not Lightning Rod would claim the top spot disappeared when I rode the coaster at night.

Lightning in the dark.

We left the park mid afternoon to take a break from the heat and returned in the early evening. The oven-like air had cooled considerably.

I heard Lightning Rod was down and its chances of reopening were iffy. I was heartbroken, but thankful for the three daytime rides I got.

Looks like Lightning Rod is reopening just in time for some twilight rides! pic.twitter.com/YpNDnsulQ6

But after a ride on Tennessee Tornado (I forgot the park had other coasters), I returned to a long line leading from Lightning Rod’s closed entrance. That had to be a good sign.

Sure enough, the ride opened soon thereafter, just as the sun was setting behind the mountains.

In line for a near-nighttime ride on Lightning Rod! pic.twitter.com/Rl2xnqSXQz

I love riding coasters at night. But not just at night — in total darkness. Lightning Rod comes so incredibly close to reaching Kings Island’s “Beast level” of darkness. 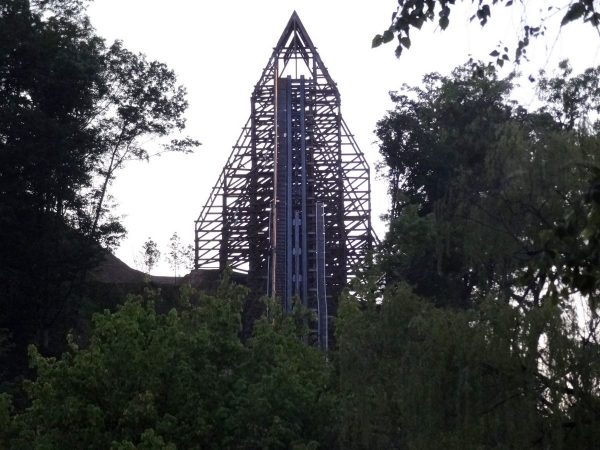 I don’t think it’s possible to truly memorize and prepare yourself for each element in Lightning Rod’s furious course. Especially not in one day.

So as my train plunged 165 feet into darkness, I knew I was at the mercy of Lightning Rod and its arsenal of tricks. And without anything to grasp, my body was thrown in every direction imaginable. I had absolutely no idea what was ahead. 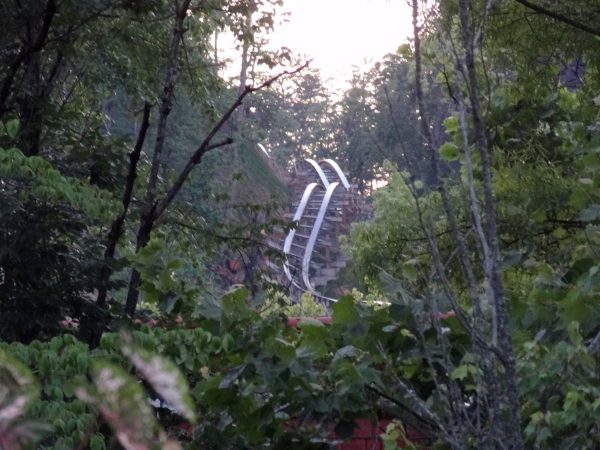 A nighttime ride on Lightning Rod is completely different from a daytime ride. The two are almost incomparable. If Dollywood’s hours extend past the sunset on your visit, do not leave the park without riding Lightning Rod at night. That’s an order. 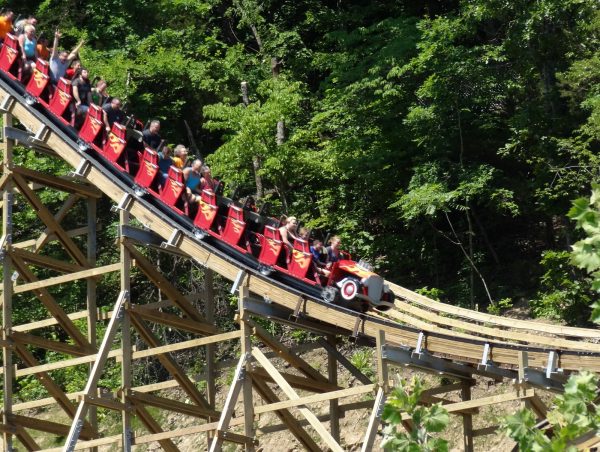 While Lightning Rod may be my new favorite wooden coaster, it’s nearly impossible to compare it to Outlaw Run. Lightning Rod is in a league of its own. It absolutely requires multiple rides to truly grasp and appreciate everything it throws at you.

I rode in a variety of spots on the train: including the front car, back car and a few in between.

I have to mention my very shaky experience in the back row (row 12). I was excited to ride in the very back as that’s usually my favorite seat on a coaster. However, I knew something was off once the train entered the launch. The car seemed to shake violently throughout the course of the ride. It wasn’t “rough” — it was shaky. I wasn’t sure if the car was going to blow a wheel or worse.

Apparently this may have been related to the “fake” last car (made to look like the trunk of a car). Perhaps it was just a fluke. But I won’t be requesting the back car anytime soon. Luckily, there are plenty of other incredible spots on the train to choose from. Aside from the back row, every other seat provided a glass-smooth ride, typical of RMC coasters.

Watch some off-ride video I shot of the coaster below:

According to Arthur Levine of About Theme Parks, Lightning Rod will open for regular operation on Monday, June 13 (unconfirmed as of this posting). On my Saturday (June 11) visit, it was open for the majority of the day, aside from a few extended bouts of downtime. I rode the coaster three times during the day and twice at night. My wait times generally ranged from 20-40 minutes. I did wait for roughly 90 minutes during one of the coaster’s breakdowns.

Dollywood and Rocky Mountain Construction have a gem of a wooden roller coaster on their hands. If you didn’t already respect the park’s coaster lineup, you will after riding Lightning Rod.

If you can’t wait to ride Lightning Rod in person, watch the incredible POV below from Upstop Media:

See even more photos of Lightning Rod on our Facebook page.

We want to hear your Lightning Rod review if you’ve already ridden the coaster! Share your thoughts in the comments section below.