To the average eye, it’s hard to imagine that this gnarled mess of steel was once a rough and mediocre wooden coaster. Rocky Mountain Construction has worked their usual magic on the ride, transforming it into a work of roller coaster art.

“When we were awarded the lease to reopen and operate Kentucky Kingdom, we promised the state that we would commit $43.5 million over three years,” said Kentucky Kingdom president and CEO Ed Hart. “In fact, we have spent a total of $53 million, exceeding our commitment by $10 million.”

Watch an on-ride POV video of Storm Chaser below:

If you need a refresher on how radically different Storm Chaser is from its predecessor, watch the Twisted Twins POV here.

Below are some Storm Chaser stats before we dive into the review:

Our Thoughts on Storm Chaser 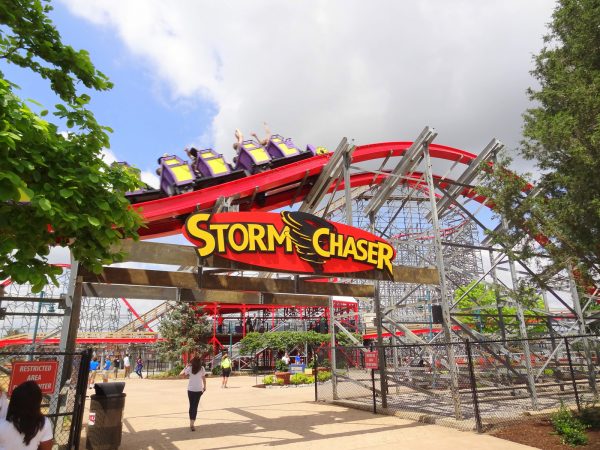 John: Storm Chaser is situated in the back of the park in an area that was left largely untouched since the park reopened in 2014. However, the park has done a beautiful job sprucing up the area and creating a ride plaza where onlookers can see a good portion of the coaster up close (the coaster is almost as fun to watch as it is to ride).  All the new plants in the park have been labeled with a barcode that can be scanned with a smart phone. Visitors can then be linked to a website where they will find photos of the plant and information about it. 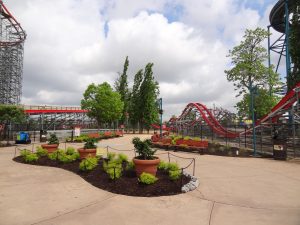 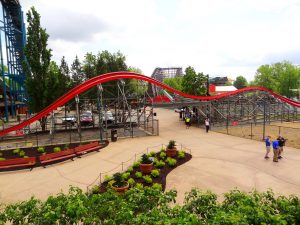 As you can see in the below satellite imagery, the area is much more open and inviting than it was in its Twisted Twins days: 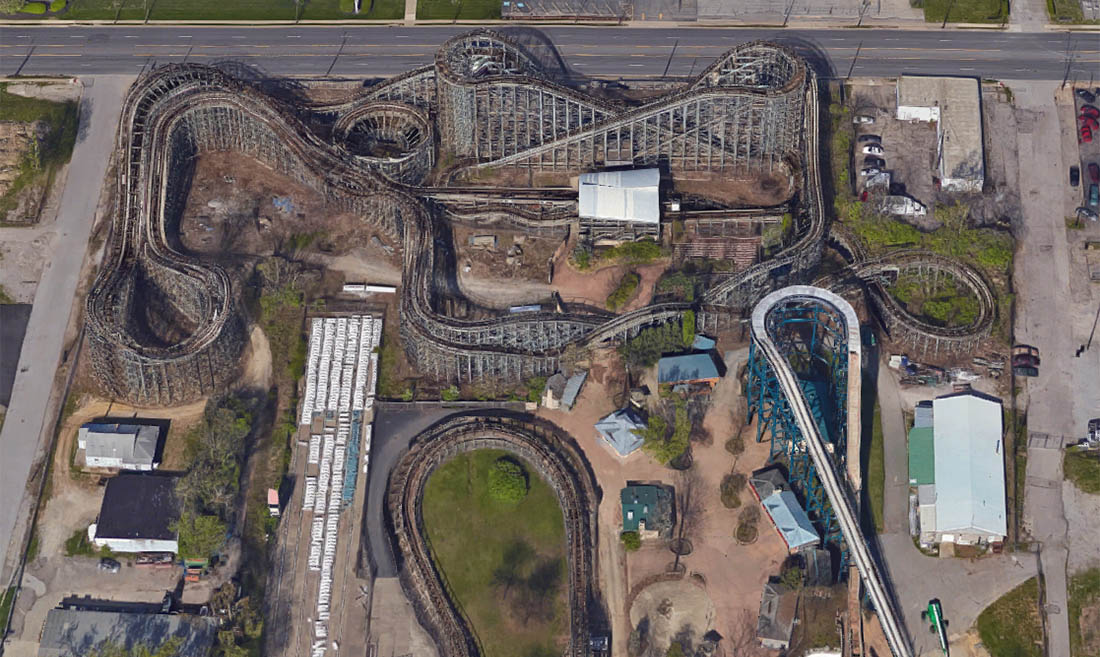 Nick: When we entered the station I was a bit confused when I saw two trains sitting there with two sets of air gates. This isn’t a dual loading station, is it? Then I realized they are ingeniously using the second station for the original Twisted Twins coaster as storage for the 2nd train. To exit the ride, you essentially cross over what used to be the tracks for the second coaster before going down the stairs.

Another big surprise for me before we even got on the coaster was how close the ride is to the Louisville airport. The lift hill is nearly aligned to be pointed right in the direction of the flight path of landing airplanes. It’s gonna be pretty awesome if you’re lucky enough to just be cresting the lift hill as a jumbo jet is soaring right at you.

John: Once we finally got on the ride, the ascent to the 100-foot-peak is quick — I didn’t have much time to admire the view.

Nick: If you sit in the back you’ll get a nice surprise pop of air just coming over the crest of the lift hill.

John: The barrel-roll drop is unlike any roller coaster element I’ve ever experienced, and it’s completely different depending on where in the train you’re sitting. If you’re in the front, get ready for a slow rollover. If you’re near the back, hang on. You’ll be pulled toward the ground head first — it’s an awesomely disorienting maneuver.

Nick: One of the elements I was most looking forward to was the barrel roll drop – only one of two in the world – and it delivered the unique sensation of getting airtime while upside down – totally awesome! 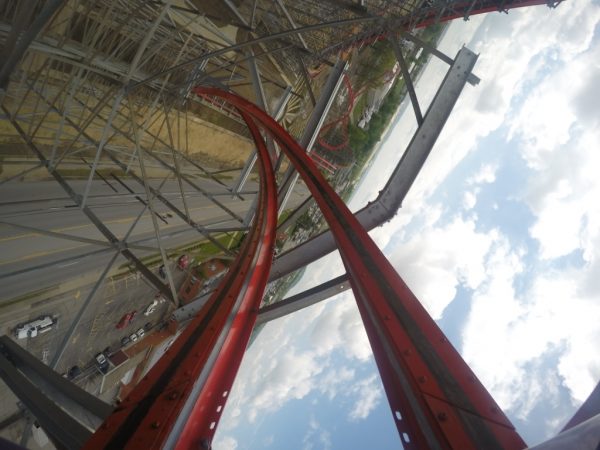 John: Don’t expect much time to mull over what just happened. The first airtime hill is quite the — updraft (I’ll try to avoid storm puns). Say goodbye to your seat and hello to the restraint — the two of you will know each other quite well by the end of the 2,744-foot-long ride.

Nick: The camelback hill following the first drop might be one of the best hills on any roller coaster ever. The extreme airtime took me by surprise every time. I think I literally yelled “holy crap!” (or some form of that) all six times we rode it. 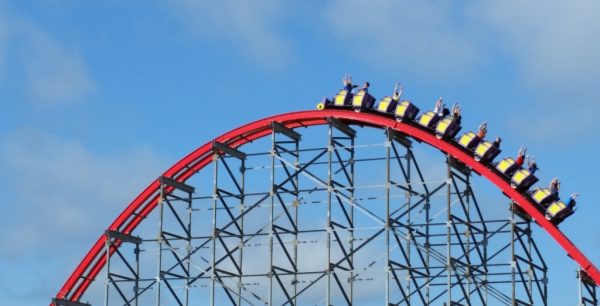 John: I haven’t been able to figure out how RMC does what follows the first airtime hill. As you enter the 140-degree stall, you experience another pop of airtime, which seems impossible as you should be pushed back into your seat. I encountered this exact same sensation on the twist-and-shout element on Six Flags Great America’s Goliath (also an RMC coaster).

Nick: Yeah, that was one of the many unexpected surprises on Storm Chaser, the hidden airtime moments such as going into the first overbank. 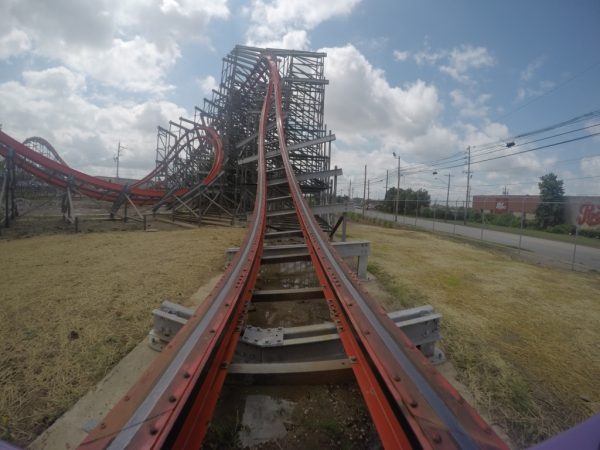 John: The unrelenting coaster continues through the 140-degree stall into the “twisted airtime” and “off-axis airtime” elements. This is one of the more difficult sections of the ride to see from the ground, but it’s filled with another large heaping of airtime.

Nick: The twisted hill following the first overbank is probably the second most powerful airtime moment on Storm Chaser and again is some of the most extreme negative forces I’ve ever felt on a coaster.

John: The following “overbank drive” might not be as tall or visually impressive as its 140-degree big brother, but it packs nearly the same amount of force. The second airtime hill that follows provides another pop of air. It leads into the corked (zero-g) roll which may be one of my favorites. I felt truly weightless (hint, the “zero” in zero-g) while flying through the element as opposed to being jostled around from side to side.

Nick: This ride is just pure laugh-out-loud fun, which you can tell in our videos because every single rider has their hands up and is loving it. 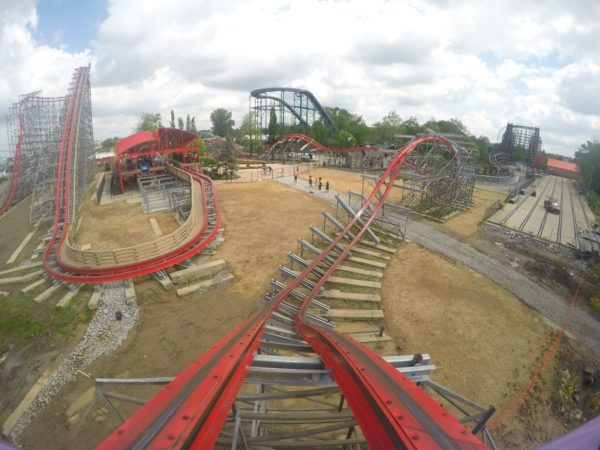 John: The corked roll offers a short reprieve from the nearly unrelenting airtime. But short-lived it is as the train enters the trick-track double up and double down, which offer onlookers a glimpse of the extreme airtime as riders are bounced up and down.

Nick: The twisted double up is one of my favorite moments on the coaster – both while riding and for watching as it’s situated above and beside the pathways.

John: I think the ride could have easily ended at the conclusion of the double down. The train loses a considerable amount of energy as it navigates through the “fear helix,” (which was modified from the layout rendering seen at the beginning of this review). The helix features another overbanked turn. But at this point, the train has lost so much speed that it’s somewhat of an awkward maneuver. I felt like I was tossed to the side, as if the train was done with me. This storm may fizzle out, but it’s still a powerful storm when at its peak.

Nick: I don’t know how to describe that last overbank other than “weird.” And yeah, I know many coaster enthusiasts are going to complain about the speed of the ride in the last two elements and that the ending is slow. I would argue that it is a good thing because it means the ride has burned off all of it’s speed on the super exciting elements. Larger coasters end with brake runs fifty feet in the air or they come screaming to a stop while still traveling sixty miles per hour, all that energy completely wasted. It’s nice to know that Storm Chaser literally uses up all of its potential energy, it’s given you everything it’s got, and I think that is a good thing. 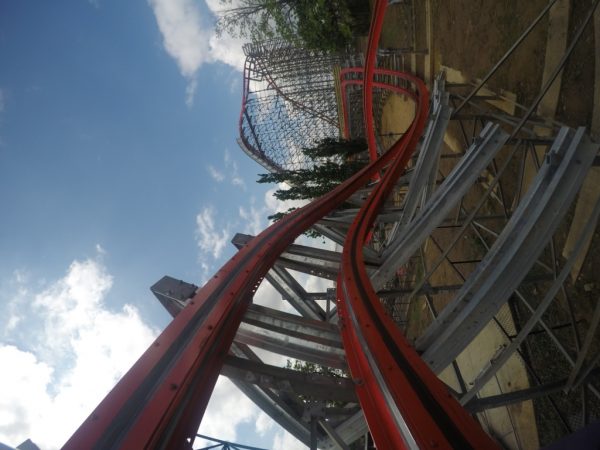 John: The coaster then makes an un-banked turn into the brake run. I’m torn between these two schools of thought: one, the ride uses up all of its energy — nothing is wasted; and two, it doesn’t make for much of a “grand finale.” Perhaps as the ride breaks in, this portion of the ride will grow on me. I’ll certainly give it another ride (or many rides).

Nick: Regardless of what you think of the climax, you can’t argue with the other 95% of this amazing coaster as being one of the best and certainly is the early contender for best new roller coaster of 2016. The crazy thing too is we were riding with half-empty trains most of the day. Just wait until later in the summer after the ride has broken in more, the temperatures rise, and you’re riding with a fully loaded train. Just the thought of that has me planning another trip back to Kentucky Kingdom later this year.

John: Overall, Storm Chaser is another incredible work of roller coaster art from the gifted team at Rocky Mountain Construction. It represents the culmination of Ed Hart’s investment in the rebirth of Kentucky Kingdom, and the beginning of many more attractions to come. If you like airtime, fast pacing and tight maneuvers, Storm Chaser is your ride. I give it two thumbs up. 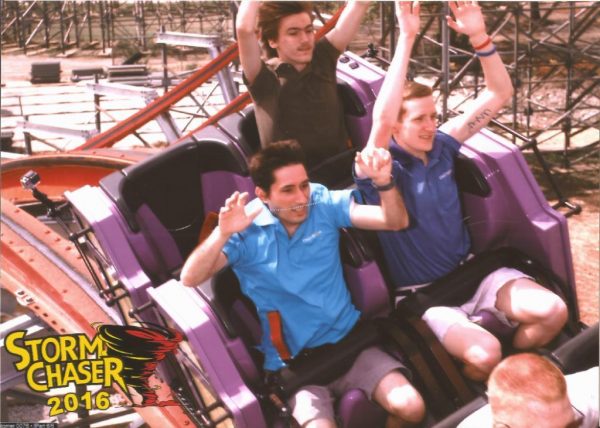 Check out our multi-angle off-ride video of Storm Chaser below and be on the look out for extreme “hairtime”:

Storm Chaser opened to the public on April 30, 2016. For more information, visit Kentucky Kingdom’s website. If you’re an out-of-state visitor like we are, they have an amazing deal where you can get in for two days plus free drinks for only $30!

At the coaster’s unveiling, Hart hinted that although the three-year redevelopment plan is complete, there are even more exciting attractions in the pipeline to fuel the park’s continued renaissance.

Special thanks to Kentucky Kingdom and their outstanding staff for inviting us to this preview. Everyone we met was very nice and super friendly. We can’t wait to go back and see you all again soon!

Are you looking forward to Storm Chaser? Let us know in the comments below.