For our third trip to a theme park in the Central Florida area for a holiday-themed event, we headed back to Magic Kingdom in December to attend Mickey’s Very Merry Christmas Party. We previously made a trip to Magic Kingdom for Mickey’s Not So Scary Halloween Party, which you can read about here, and a trip to SeaWorld Orlando for the Halloween Spooktacular, which you can read about here. 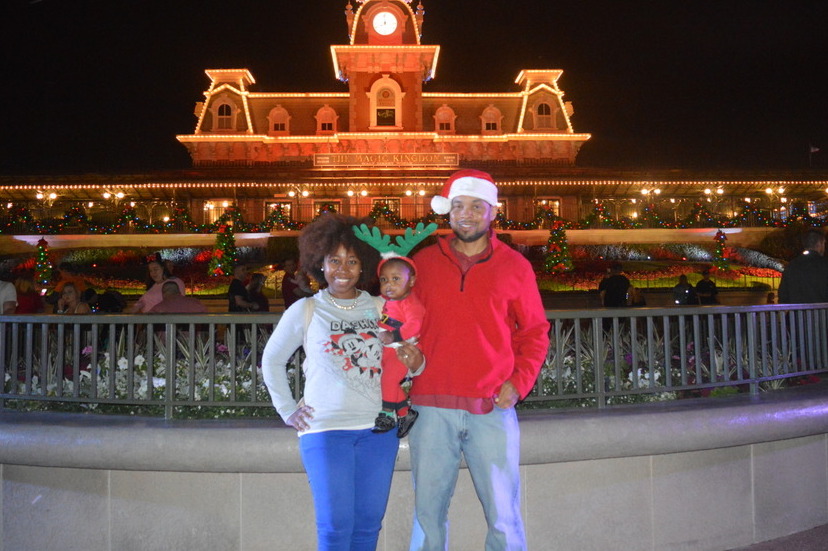 I attended the event with my wife and infant son (along with another family with an infant). There were a ton of things to do on the event schedule, however unlike our last trip, we didn’t have a set plan of things we wanted to do, so we leisurely explored the event so that the babies could enjoy themselves. We started out by exploring the Main Street USA area and checking out the decorations. 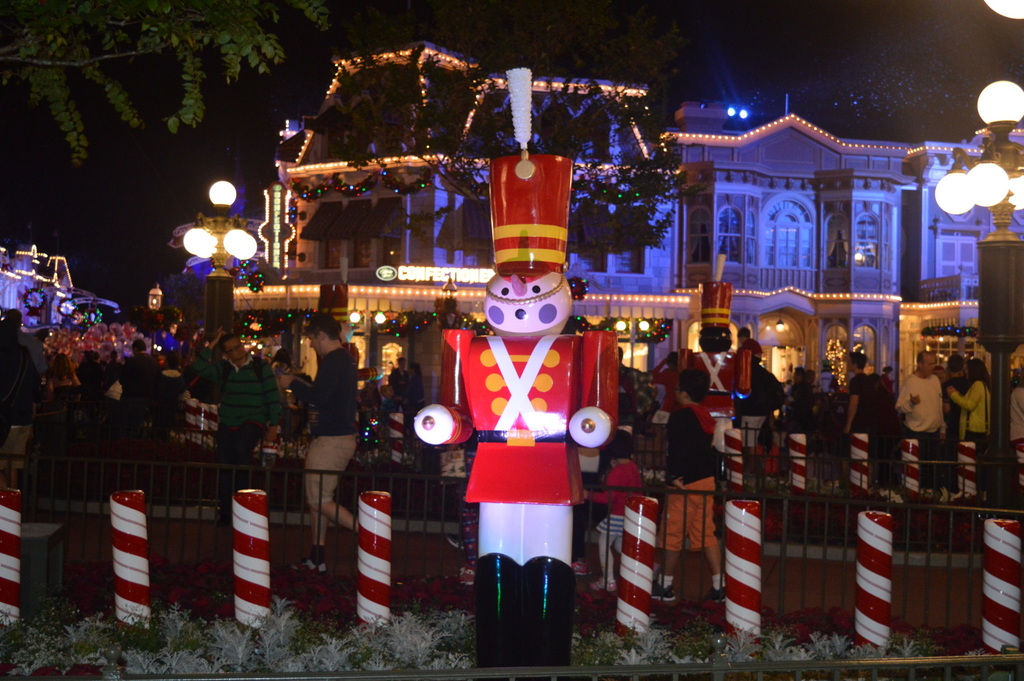 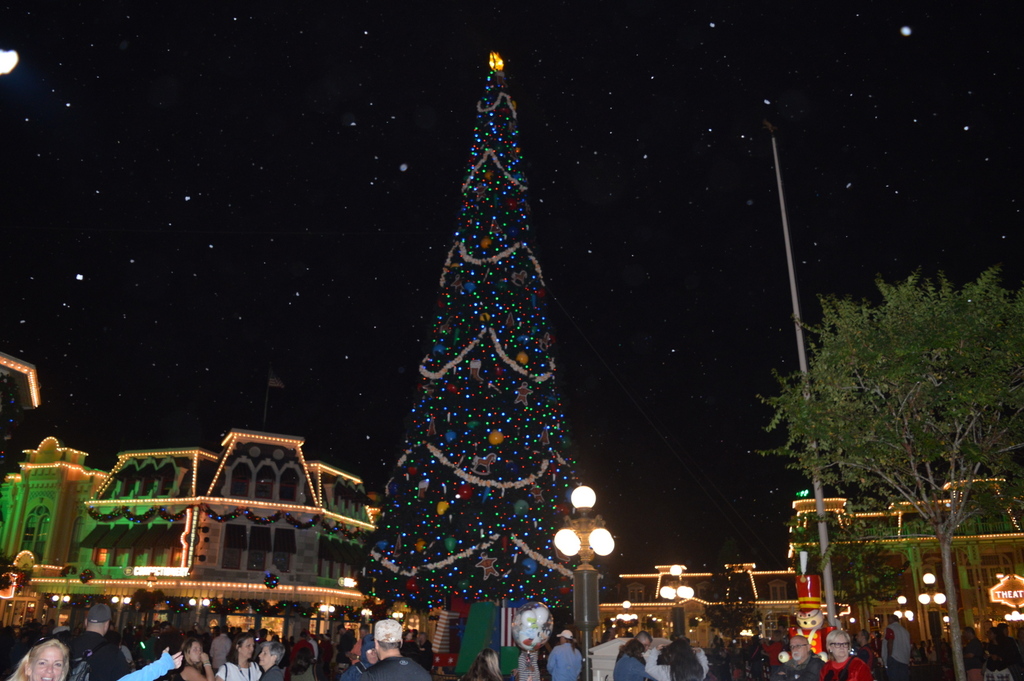 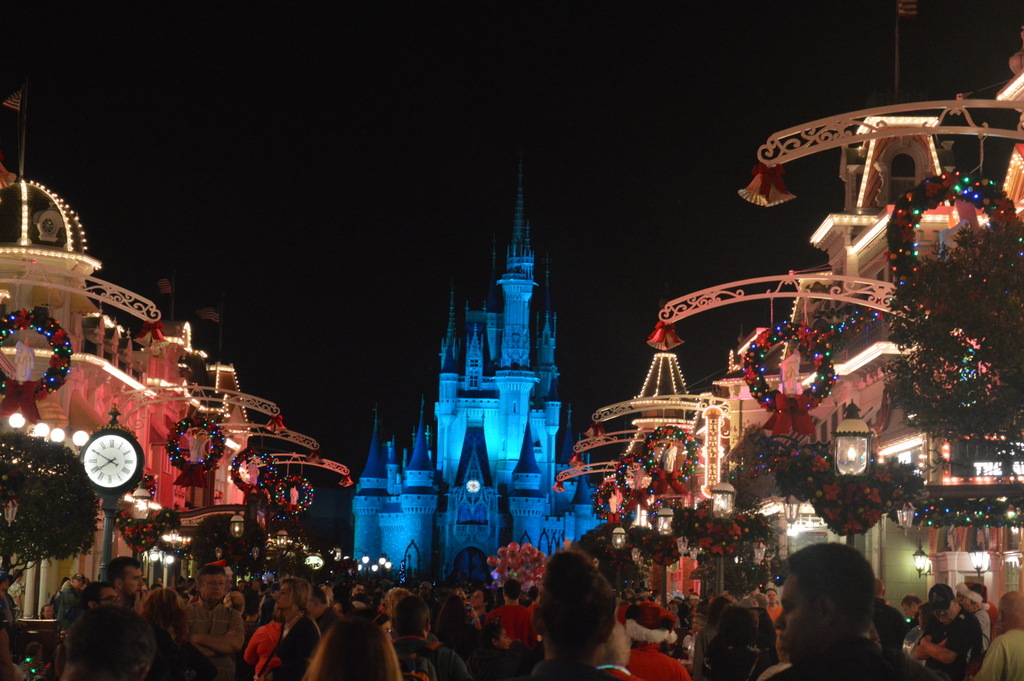 While I had heard that the event had sold out for the night (as is usually the case for many of the event weekends), it didn’t feel as crowded here as it did during the Halloween Party. Since we arrived a bit later than we did for the Halloween Party, I’d chalk it up to all the daytime guests not holding event tickets having already left the park. Like the aforementioned event, most areas of the park and their attractions were open for this event, so with a cap on number of guests at the event, it makes it fairly easy to enjoy rides across the park. My son was having a blast seeing it “snow” on Main Street, so we hung around the area for a bit before making our way towards Cinderella’s Castle to catch the “A Frozen Holiday Wish” show. 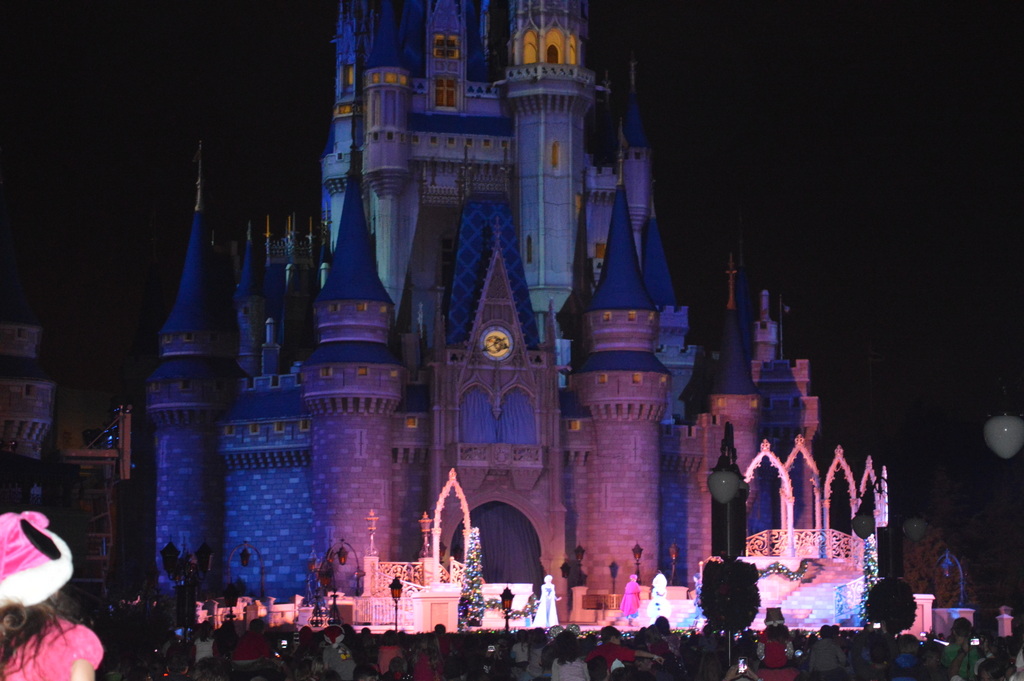 The crowd for the show grew rather quickly, and I was sidetracked getting acclimated to using my new camera, so we missed out on getting some prime real estate for the show. We still were able to get a fairly decent spot so we could clearly see the stage. The show is themed around Anna, Elsa, Kristoff, and Olaf using Elsa’s ice magic to turn Cinderella Castle into an ice palace. The show was not nearly as long as the Hocus Pocus show for the Halloween Party, as they got to the climax of the ice palace transformation pretty fast. 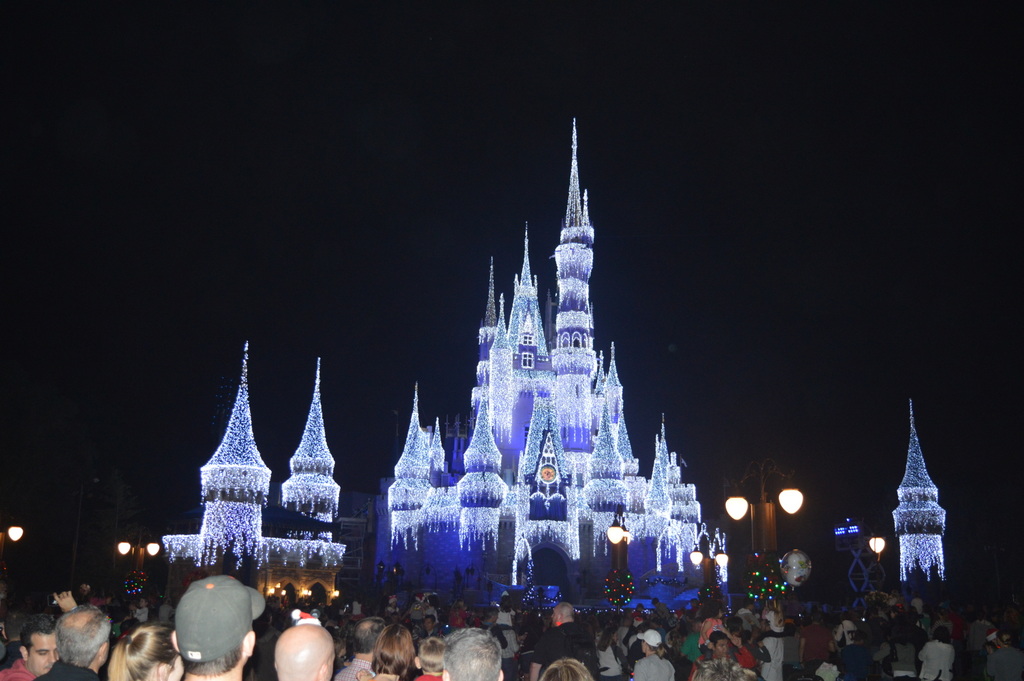 And what a site to see it was! Next, we decided to check out Mickey’s Once Upon A Christmas Parade. The parade is one of the highlights of the event, and since we missed the parade for the Halloween Party, we knew we couldn’t miss out on this one. 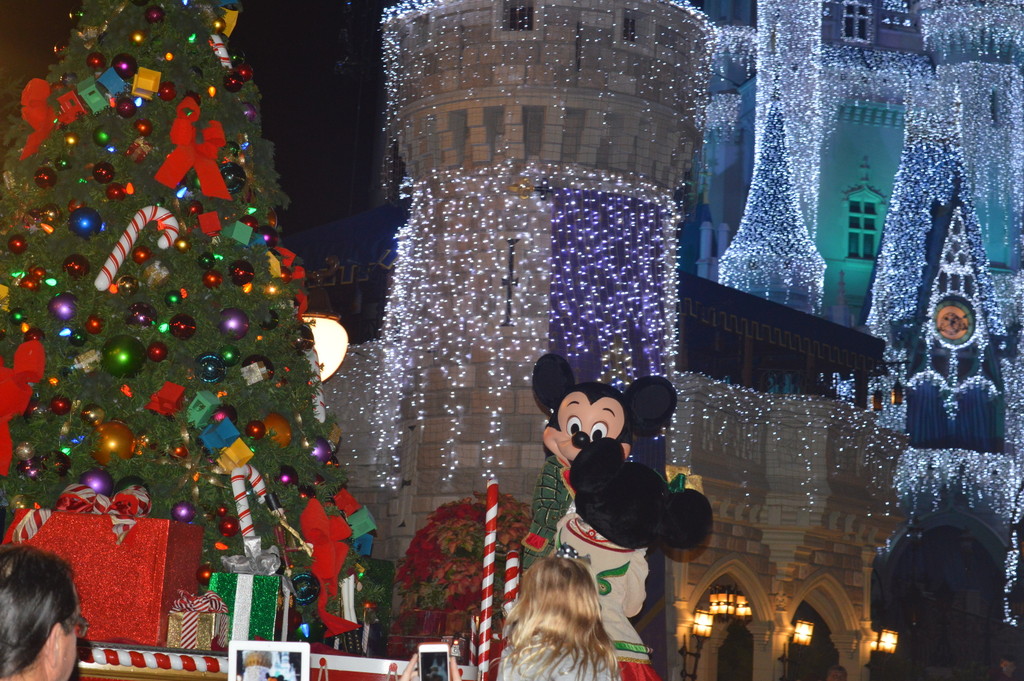 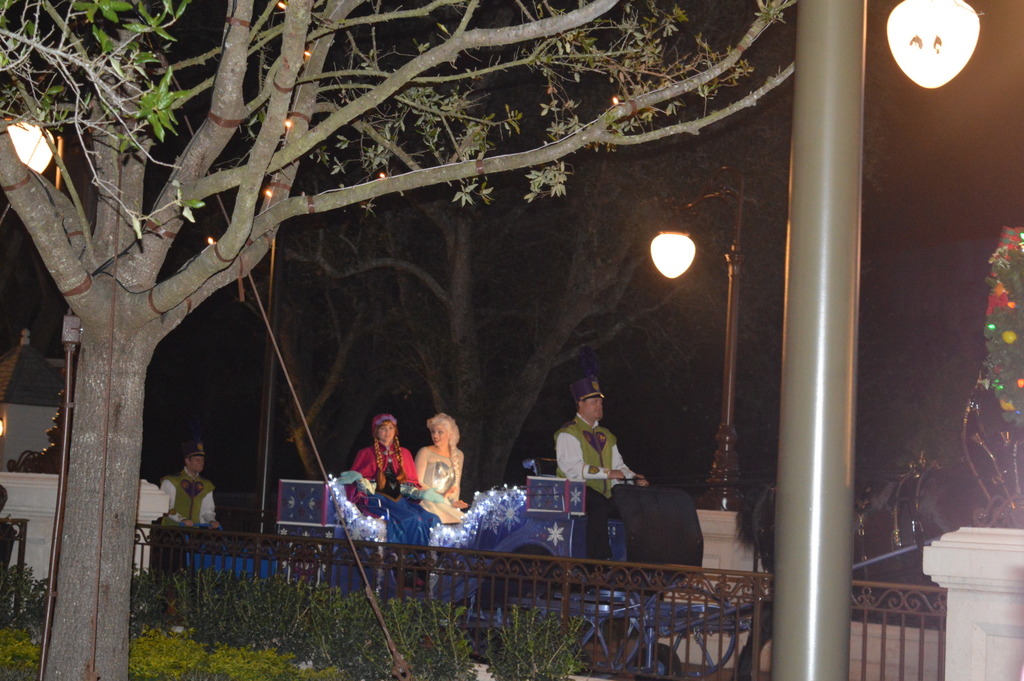 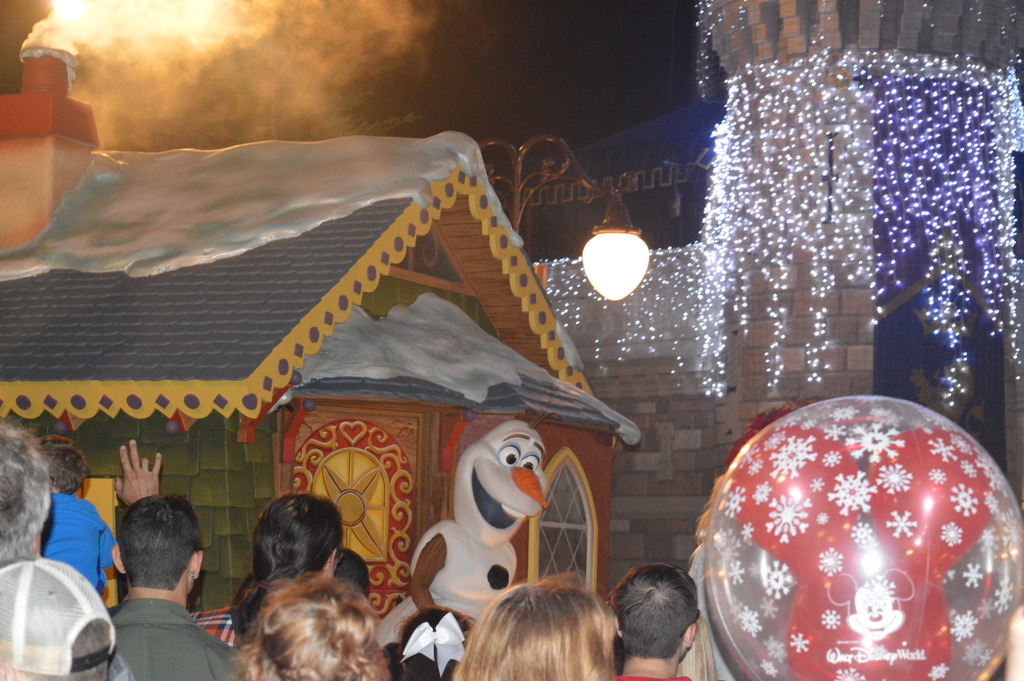 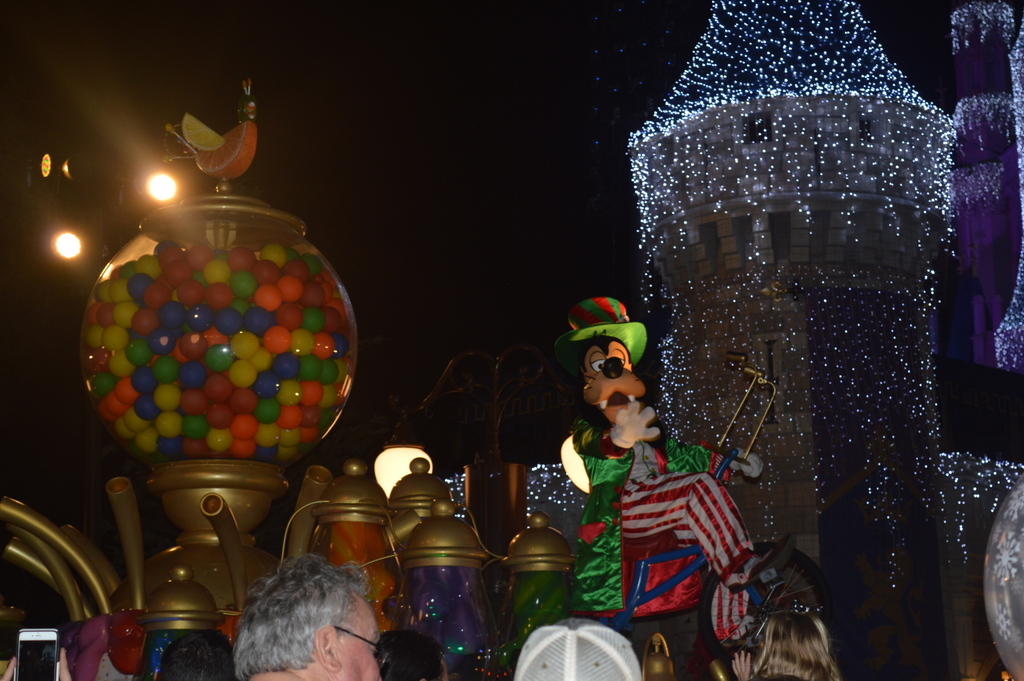 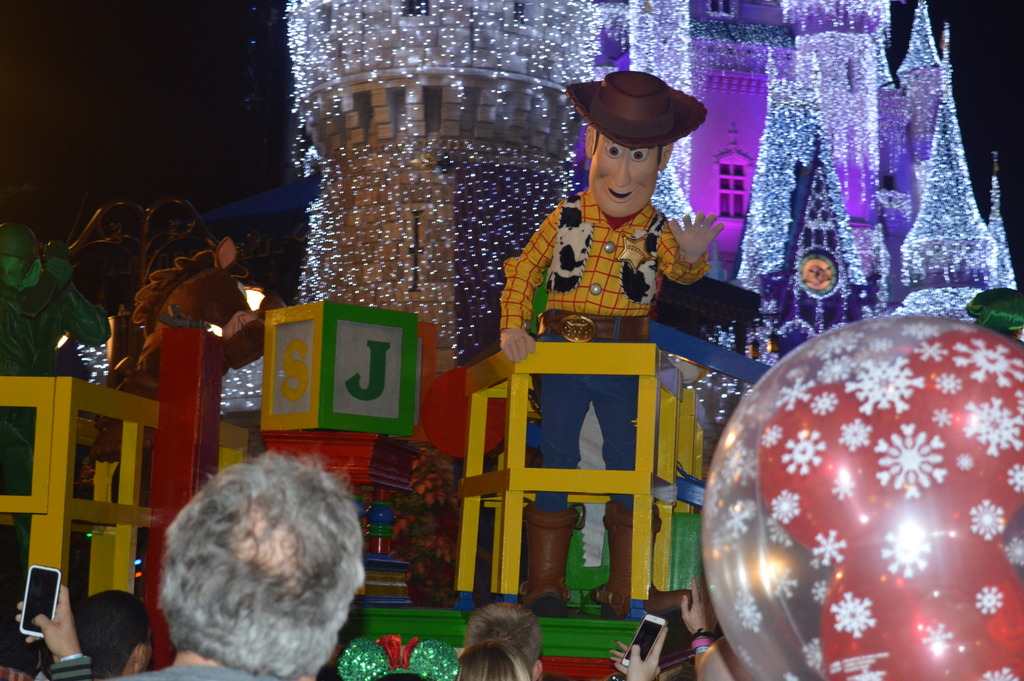 We had great timing for seeing the parade, as it started around the same time the Frozen show ended. The path of the parade led right around Cinderella’s Castle, so we didn’t have to move too far to get a good view of the parade. The parade of course included Mickey and Friends, as well as the cast of Frozen, however, plenty of other characters made appearances in the parade, from the Disney Princesses, to Winnie the Pooh and Friends, to the Toy Story gang, to even Wreck It Ralph! 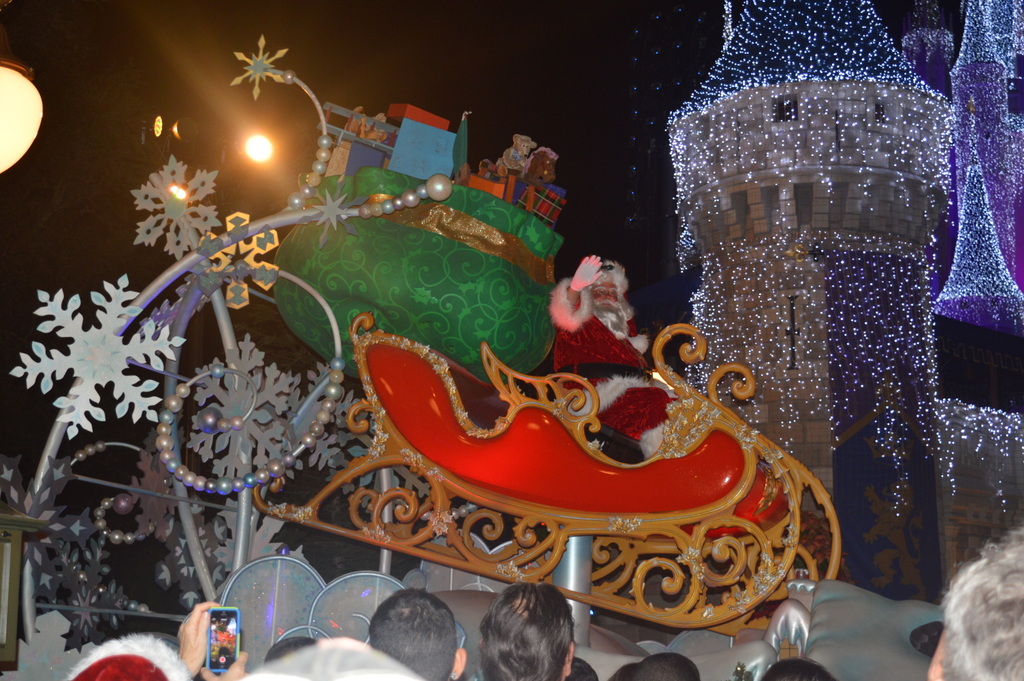 Of course, no Christmas parade would be complete without a visit from Santa Claus himself! After the parade ended, we wanted to take advantage of the complimentary Christmas cookies, hot cocoa, and apple cider, so we headed over to the nearest station, which was Columbia Harbour House. 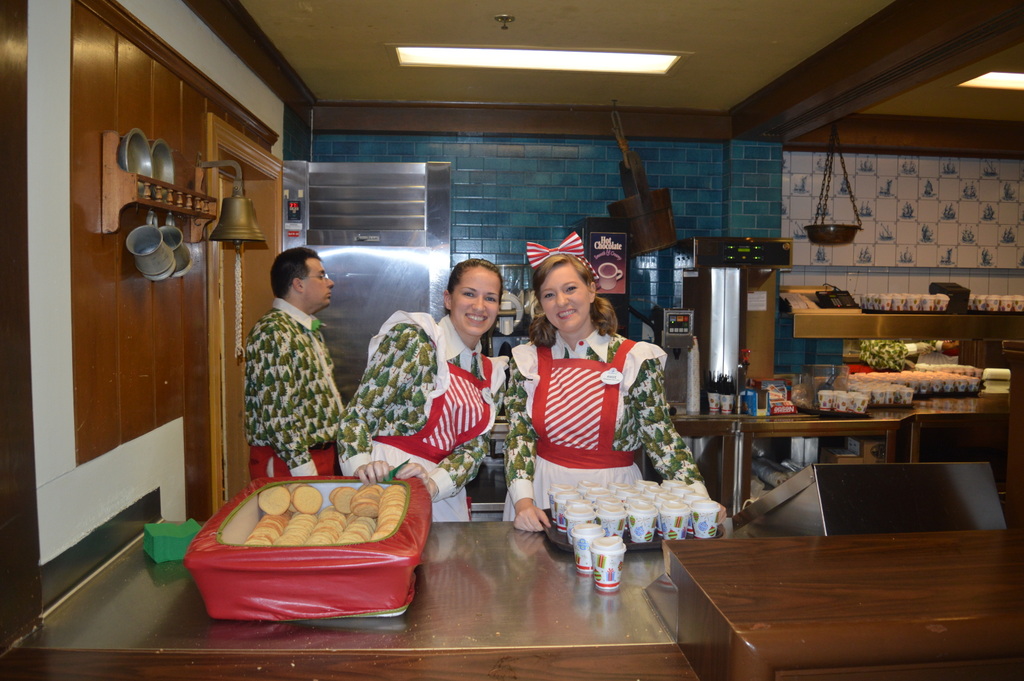 The lines for the holiday treats were extremely fast. The entire area was well organized with plenty of tables and seats available for families to take a load off of their feet. We even got the cast members to pose for a quick picture! After we grabbed a quick snack, we wanted to take advantage of the short ride wait times, so we headed over to It’s A Small World. 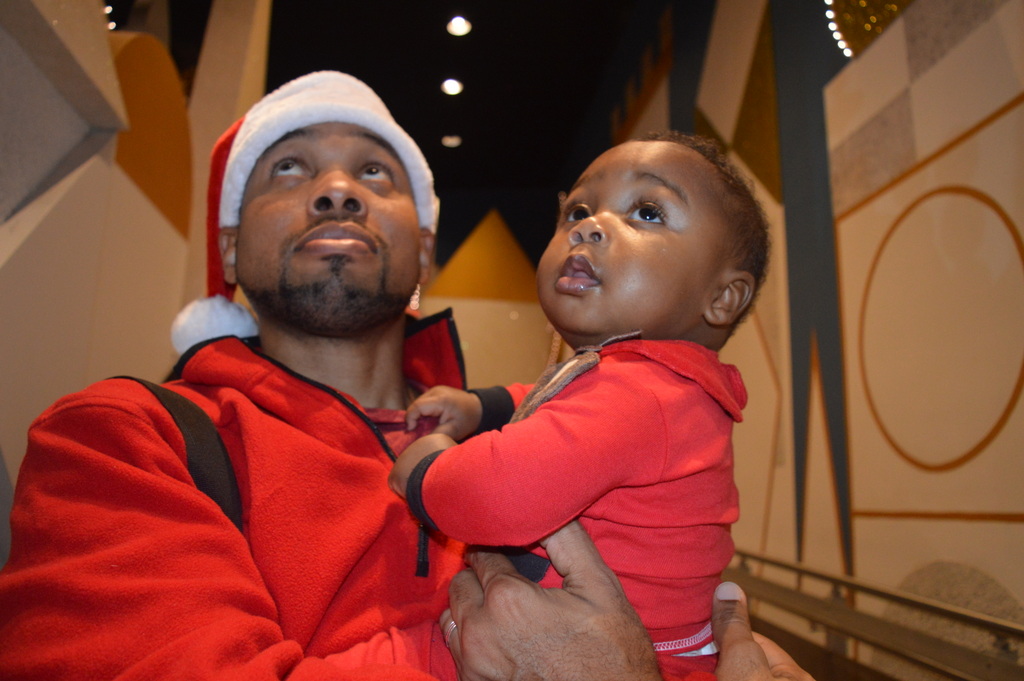 This would be my son’s first theme park ride! We both were excited! (Okay, maybe I was a bit more excited than him.) The queue for It’s A Small World wasn’t exactly walk-on this time around, but we still were able to get seated on the ride in under 15 mins. I checked my My Disney Experience app and most of the other rides had wait times of 15 mins or less, with the exception of the Seven Dwarves Mine Train and Peter Pan. Again, the event presents a GREAT chance to check out all the park’s rides. 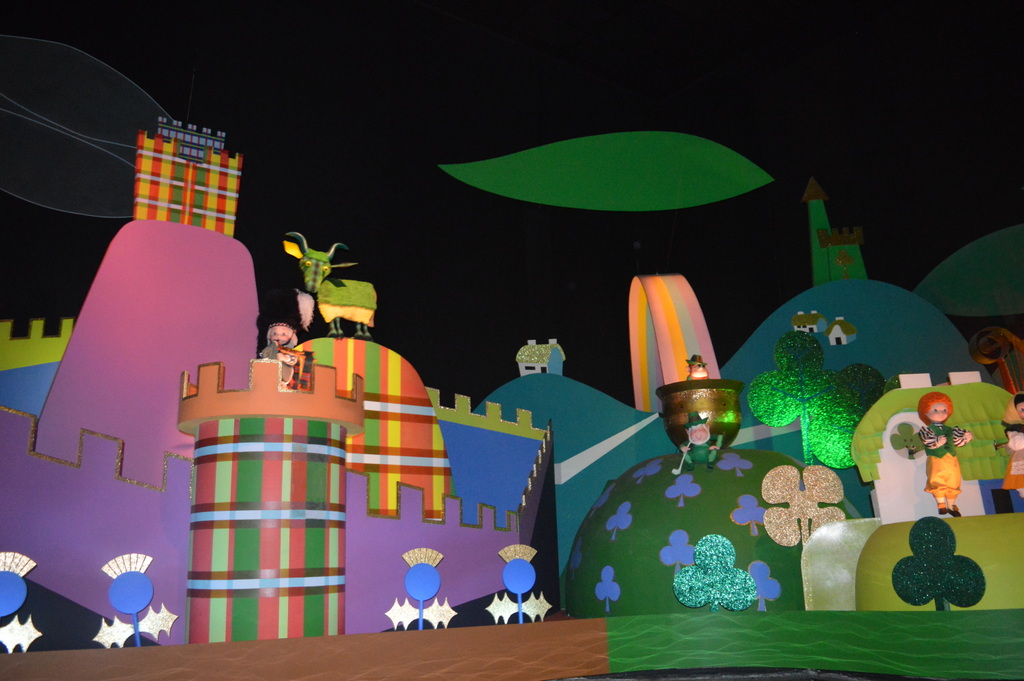 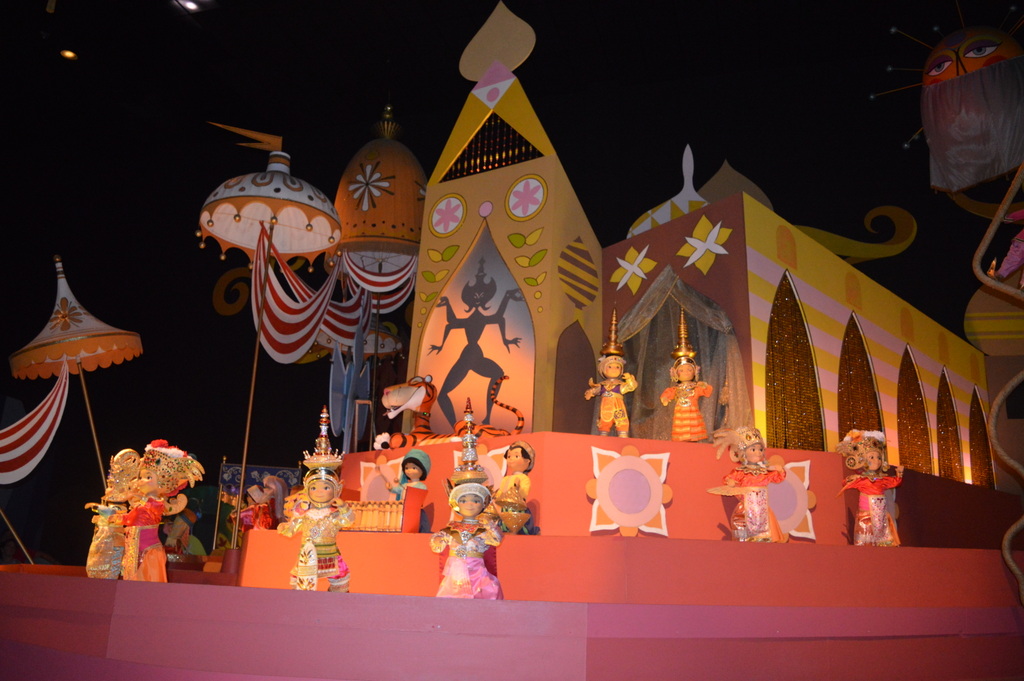 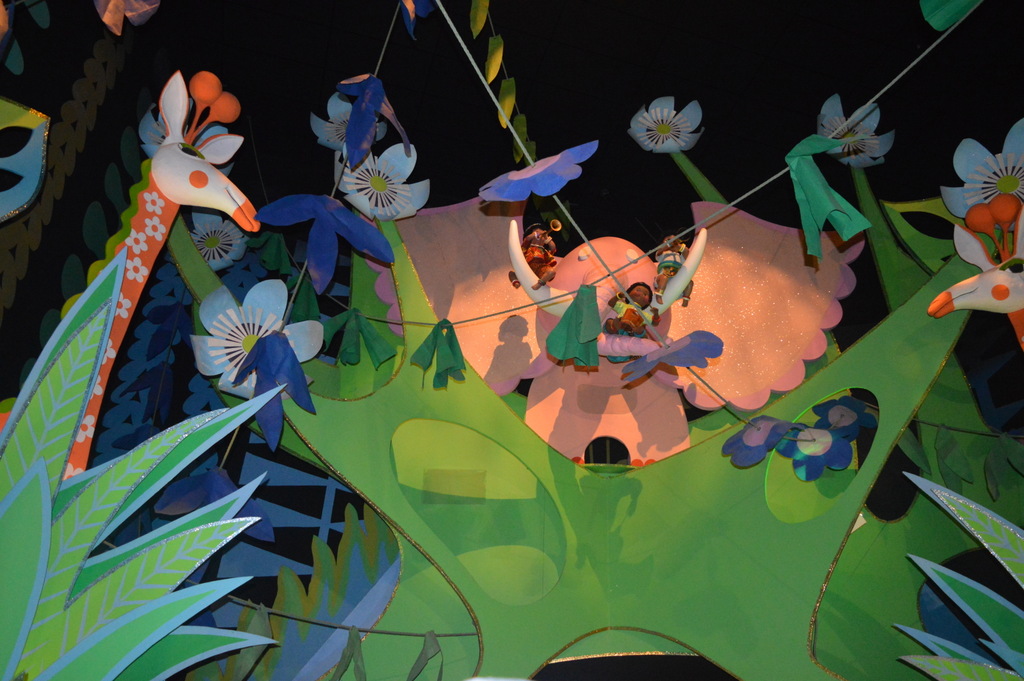 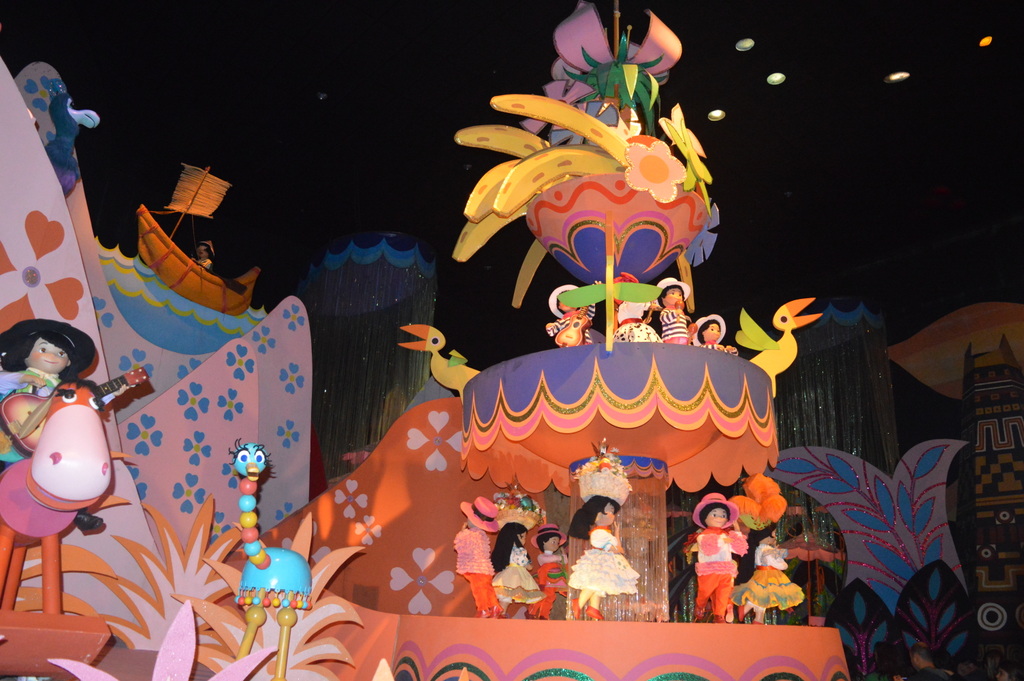 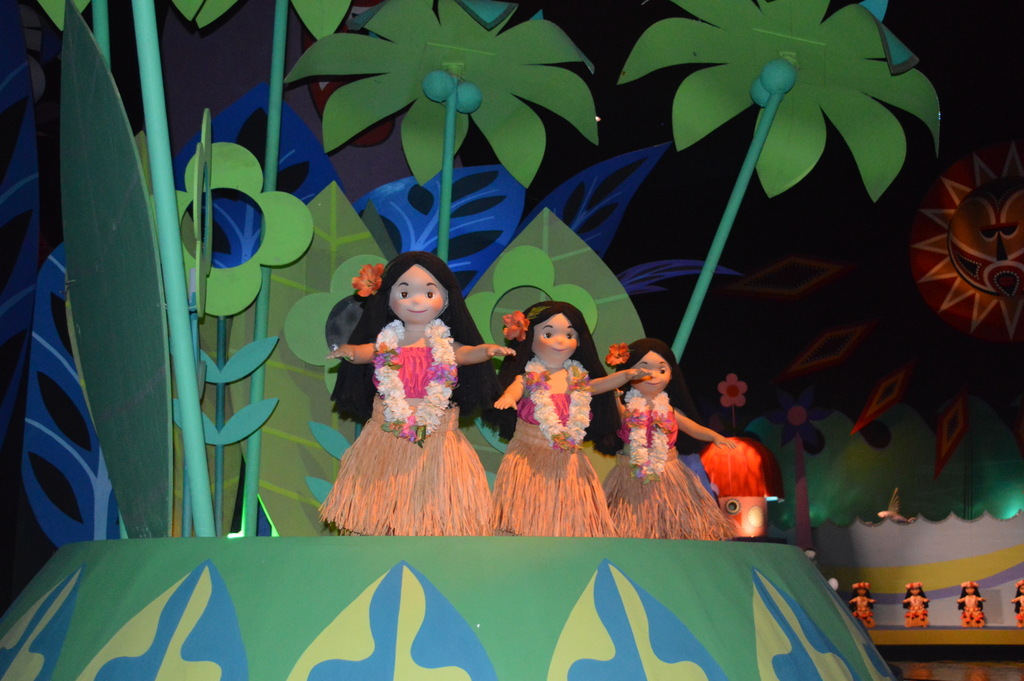 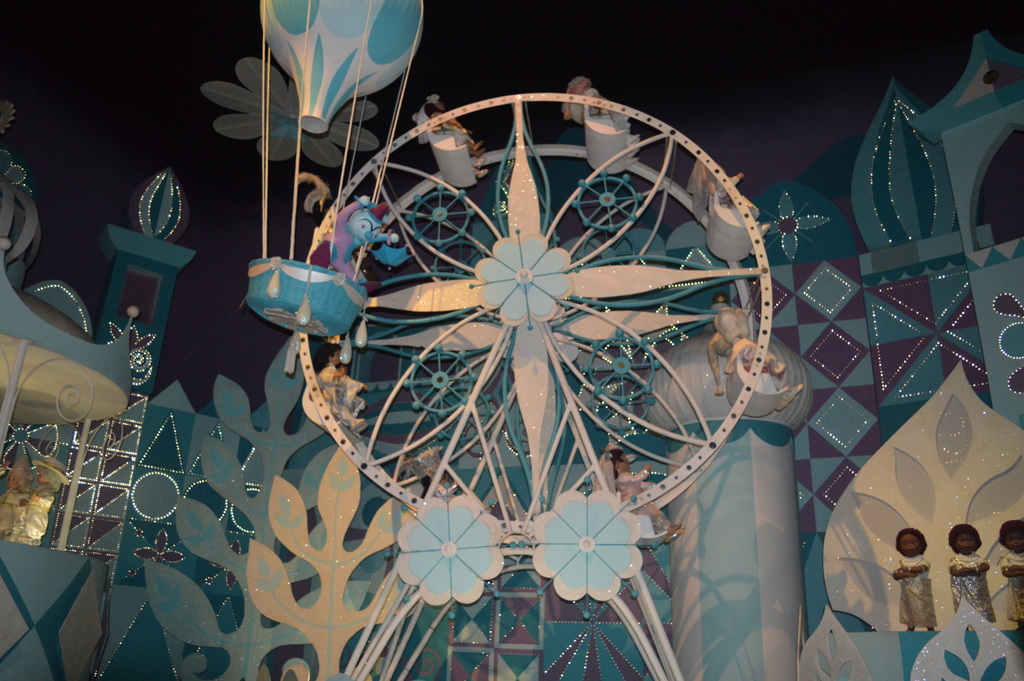 As I’ve grown older, I’ve come to appreciate It’s A Small World more and more for it’s diversity and attention to detail. 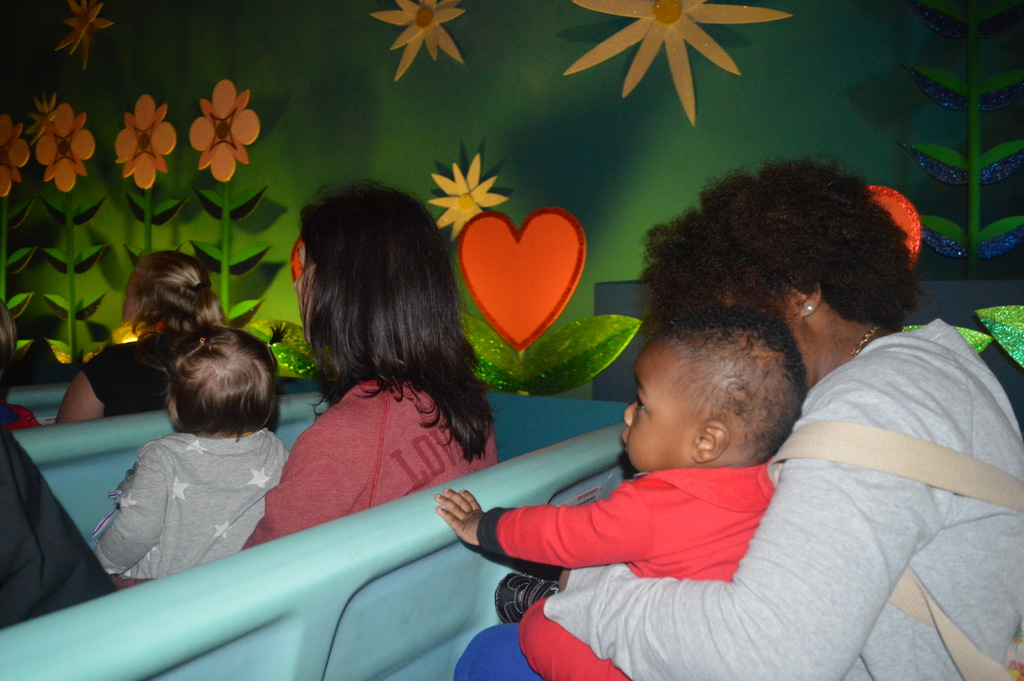 Of course, nothing beats witnessing a child experiencing the ride for the first time!

Afterwards, we headed over to Seven Dwarves Mine Train. I was intent on finally getting an opportunity to ride it. However, the line had started to swell and the wait time went past an hour. We headed over to Under the Sea: Journey of the Little Mermaid, which had no line whatsoever. I didn’t get a chance to take pictures on the ride, as the little one was starting to get sleepy. After we got off the ride, I found out that the Seven Dwarves Mine Train was temporarily down. The little ones were just about done at this point, so we decided to call it a night. I’ll get my ride in on the Mine Train eventually! Overall, Mickey’s Very Merry Christmas Party is definitely another event that we plan on making annual family trip. If you are planning on being in Orlando during the holiday season, it definitely is worth the price of admission. Have you ever attended Mickey’s Very Merry Christmas Party? Feel free to comment below!