One of the best things about living in California is that most West Coast amusement parks are open year ’round, and they pretty much all add new attractions and decorations for the holidays, along with special events.  So if you’re lucky enough to live on the West Cast, or lucky enough to be able to plan a trip out this way, here are six ways for roller coaster fans to spend their time off around the holidays.

Whether you’re in Northern California or Southern California, your local Six Flags park is open for their annual Holiday in the Park. Discovery Kingdom has been having a holiday themed December since 2007, whereas this is only the second time Magic Mountain has featured Holiday in the Park.  Both parks are featuring holiday decorations and events, some familiar from past years and some new.  New at Discovery Kingdom this season is “Six Flags Dazzle”, a synchronized light show that happens at the giant 65 foot Christmas tree in the park.  At Magic Moutain four areas of the park will gain holiday themes, with the park featuring over one million lights, including three “dancing light shows.”  Holiday in the Park has now started at both parks, with Magic Mountain open weekends until December 19, then open daily until January 3 with the exception of Christmas.  Discovery Kingdom is open the same dates, except for it is also closed Christmas eve.  With the both parks open until 7 or 8 most days as well, it should be easy for get in a few night rides during a visit.  More details on the events at Magic Mountain and Discovery Kingdom can be found on their sites, and we plan to make visits to both parks this month for our own reviews. 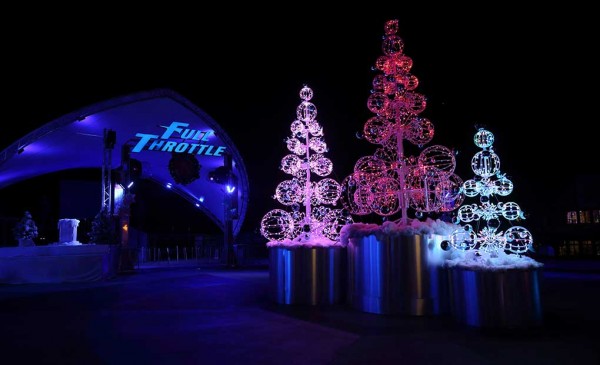 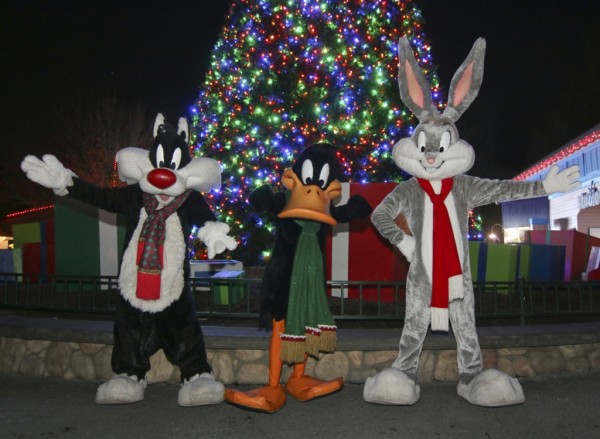 Universal Studios celebrates the holidays with their “Grinchmas(tm)” celebration.  The celebration centers on the Grinchmas Tree in the main plaza, with Grinch meet and greets under the tree.  Various kids holiday activities, like a storytelling show of “How the Grinch Stole Christmas” with audience interaction and special effects.  The highlight of the Grinchmas season is probably the performances by “whos” at the Grinch sets on the Studio Backlot tour.  Grinchmas runs on weekends December 5-7 and 12-13, then daily starting December 18 through January 3, including Christmas Day.  More details can be found at the Universal Studios site. 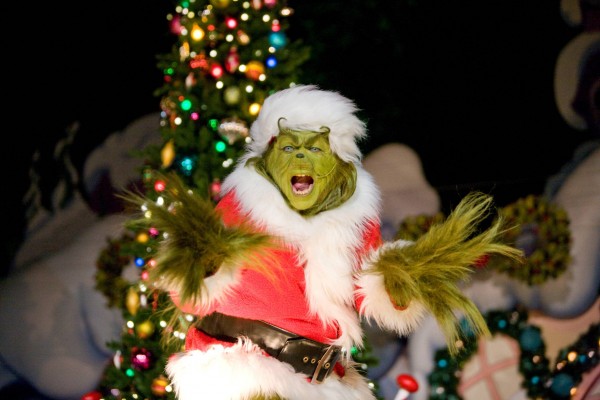 SeaWolrd San Diego is celebrating the holidays with a bunch of special attractions, including some returning favorites like a Christmas themed whale show, Shamu Christmas Miracles, and Dolphin show, Dolphin Island Christmas (insert your preferred political statement here).  A Sesame street show will also entertain the kids, along with several other themed animal shows and themed areas.  In the past SeaWorld has also featured a “SnowWorld” themed attraction with oodles of fake snow, but according to the park they decide not to include it this year because of the California drought (and the large amount of water required to make and keep snow in San Diego).  Good for them! 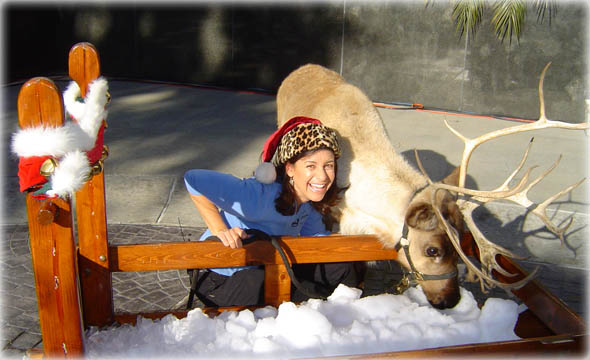 Meet some reindeer at SeaWorld.  I wonder if they’re selling any reindeer jerky at the park…

SeaWorld has already started their holiday celebration, and it continues through January 3 as well, open daily.  More details on all the shows and attractions can be found here.

Legoland officially kicks off their winter celebrations with a Christmas Tree Lighting on November 30, after which days at Legoland will include special Christmas events, and certain nights will feature things like Holiday fireworks.  Each night following Novermber 30, through December 24, will feature nightly tree lighting ceremony.  A snow play area during the days will let kids pretend they’re somewhere much colder for the Holidays, and holiday themed shows will also be added to the park (as well as meeting Lego Santa, which sounds a little frightening).  The park is open almost daily, but closed the first three Tuesdays and Wednesdays of December.   Snow days runs through the 31 of December, which will also feature a kids New Years Eve celebration and “Brick Drop”.  Holiday Fireworks happen the 26-30 of December.  More details and the full calendar can be found on the Legoland website. 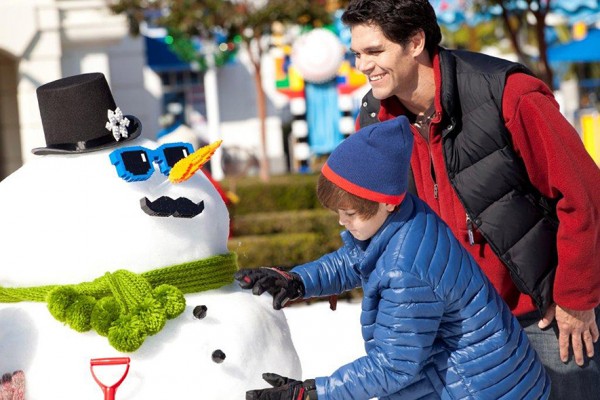 Knott’s does a great job with Christmas, as they do with most themed things, transforming the park into Knott’s Merry Farm for the holiday season.  Multiple Christmas shows, ranging from an all new Peanuts show to performances of “A Christmas Carol” fill the park, and Ghost Town get blanketed in snow.  Apparently this year an even larger part of GhostTown will be getting a dose of white for the holidays.  Holiday decorations will cover the park, and the Christmas crafts village is a great place to get some souvenirs for your friends stuck somewhere without an open theme park.  Knott’s Thrill rides are almost all open, but remember GhostRider is closed for its major refurbishment (might be able to watch some construction in progress, though!).  Merry Farm runs through January 3, and is open every day except for Christmas.  Check out the Merry Farm website for more details about all the shows and Holiday souvenirs.

Finally, Disneyland and Disney’s California Adventure go all out for the Holidays.  Last season I wrote that Christmas time was my favorite time of year to visit Disneyland, and I don’t think that’s changed.  The park gets a new look as buildings and objects all over Disneyland are decorated for the holidays, and multiple rides receive Christmas overlays.  Along with ride deocrations like the Holiday Haunted Mansion and Jingle Cruise, Holiday themed parades and the holiday World of Color show run throughout December.  Add on top of that the fact that Star Wars Season of the Force just started, and that Disneyland is continuing to celebrate their 60th anniversary, and it’s safe to say it’s a pretty fantastic time to visit Disneyland and Disney’s California Adventure.  You can read about our visit last December here and here.  One word of warning though, Disneyland gets packed during the holidays.  If you want to go, I’d recommend taking some week days off in the first half of the month, or be willing to do things like use the single rider lines even with a big group (you might not all be together, but you’ll be close).  Check out our advice for avoiding long lines, and try applying some of them.  Disney’s Fast Passes help a ton too, but still be prepared for waits.  Disney’s holiday celebration continues through January 6.  All the details on the park can be found on their site here. 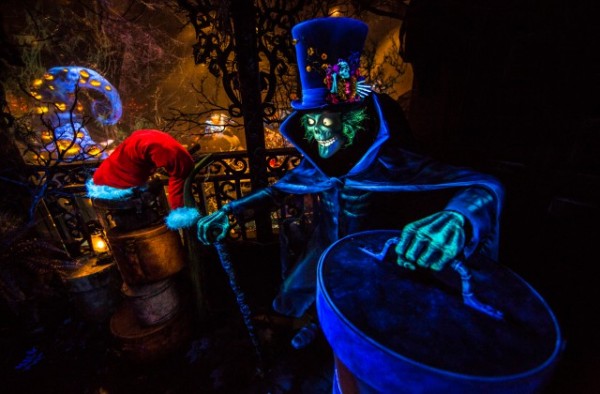 Ride overlays like the Holiday Haunted Mansion are some of what makes Disneyland great during December. 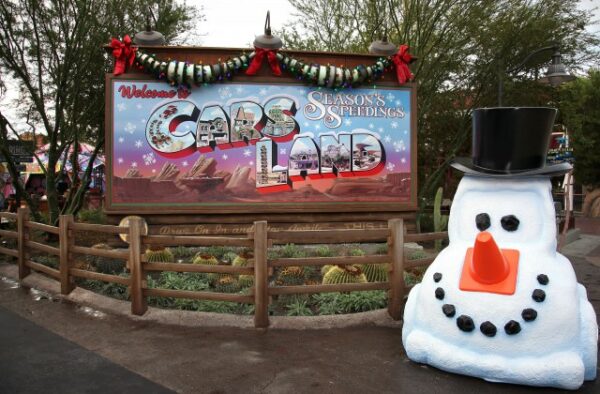 California Adventure gets some nice theming as well.

Hopefully that helps you plan how to spend some of your holidays!  Do any of you have plans to visit any year ’round parks during the winter?  Let us know in the comments below, and stay tuned for reviews and reports from at least of few of the Holiday events listed above.