Before I talk about my time at Mickey’s Not So Scary Halloween Party, here’s a quick Disney story for you. The last time I went to Magic Kingdom, I was with my 2-year old niece, my older brother and his wife, my parents, and my younger brother. Take note that my niece was the only kid in the group. We headed straight for Fantasyland and got in line for The Many Adventures of Winnie the Pooh. When it came time to board, my older brother, his wife, and my niece climbed in the front row of the first car. My parents jumped in on the row behind them, leaving my little brother and me behind to wait on the next car. So basically, you had a 26-year old guy and his 16-year old little brother sitting on the front row of the Winnie the Pooh ride at Walt Disney World with some random tween girls sitting behind us. Can you say awkward?  The part where we went bouncing along with Tigger was especially uncomfortable. I noted to myself that day that I wouldn’t be coming back to Magic Kingdom unless I had a kid of my own. Well, 8 years later with my 8-month old son on board, I’m back! 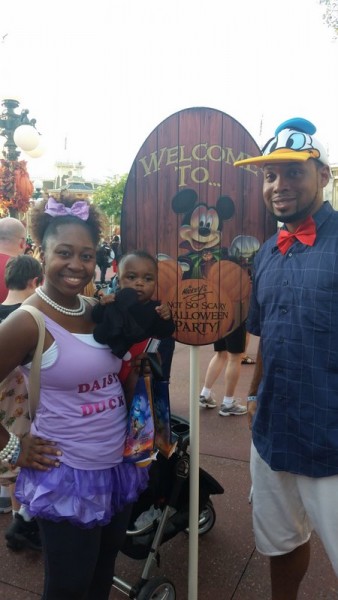 For those that don’t know, Mickey’s Not So Scary Halloween Party is a separately priced special event at Magic Kingdom at Walt Disney World in Orlando, FL. Tickets range from $68-$79 for adults and $63-$74 for children from age 3-9. During MNSSHP event nights, regular park hours end at 7:00PM with the event lasting from 7:00PM to midnight. However, Halloween Party ticket holders are allowed to enter the park starting at 4:00PM. Ticket holders are given special bands, and when regular park hours end, park goers not sporting wristbands will be funneled and/or escorted out.

Halloween Party ticket holders are “treated” to a host of events and entertainment.  First, there are Trick-or-Treat locations scattered throughout the park. Cast members are generous in their giving out of candy, enough that I was told it might be wise to buy a souvenir bag since the regular bags are too small for the loads of candy to be gotten. Plus, you’re allowed to make repeat trips for the Trick-or-Treat lines, so if you wanted to you can pretty much spend the entire night hoarding candy. Not that I would recommend that, as you’d be missing out on plenty of other good entertainment. Other events at the party include Mickey’s “Boo-To-You” Halloween Parade, the Character Dance Party in Tomorrowland, Celebrate the Magic at Cinderella’s Castle, the Happy HalloWishes fireworks show, and the Hocus Pocus Villain Spelltacular. Additionally, there are character meet-and-greet locations across the park. 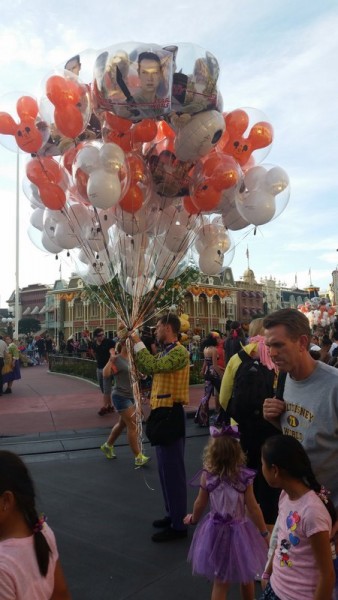 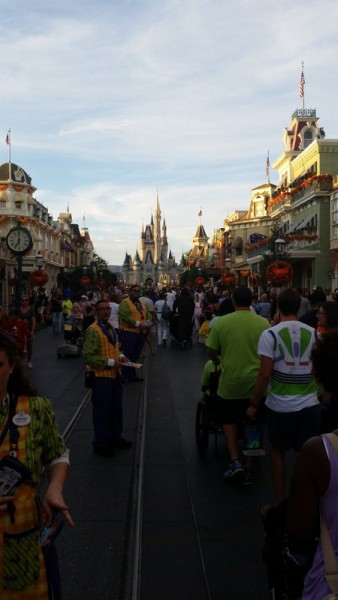 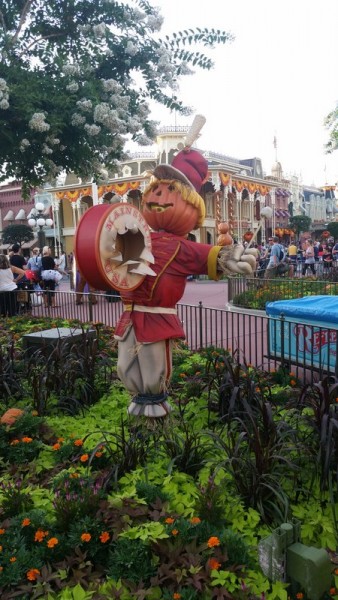 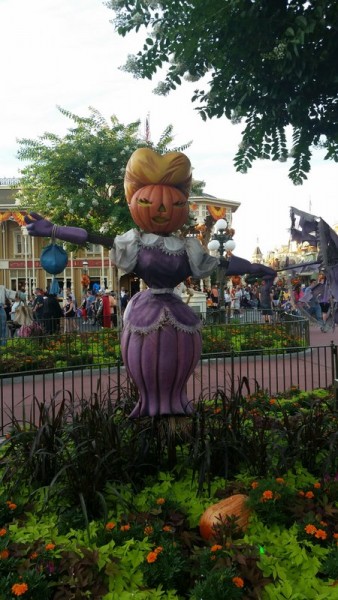 Of course, I can’t go without mentioning that most of the attractions at Magic Kingdom are open during Halloween Party hours. With the park being open exclusively to Halloween Party ticket holders, it meant short ride wait times throughout the park! According to the My Disney Experience app on my phone, the longest wait times were for Peter Pan’s Flight at 30 mins and Seven Dwarfs Mine Train at 30-40 mins. I’ve been told that wait times for the Seven Dwarfs Mine Train can easily pass 90 mins on a typical day. So the ride queues being shorter being shorter is definitely an added bonus to the event for ride enthusiasts, with many rides being walk-on. 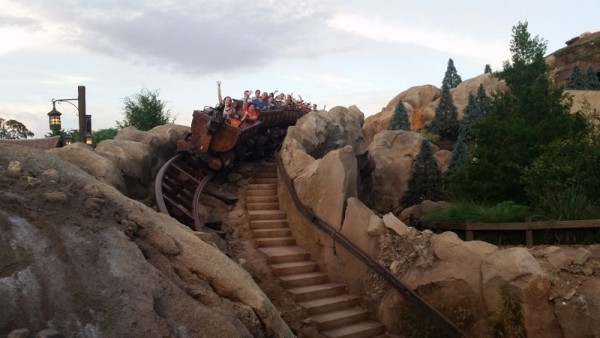 Unfortunately I didn’t get to do any riding on this trip since our group had a pair of 8-month old infants with us. Plus, we got a late start on the evening and had to head straight for Beast’s Castle for a dinner reservation at Be Our Guest restaurant. Beauty and the Beast is my wife’s favorite Disney movie so there was no way we were going to miss this reservation, Halloween Party or not!

I have to say that Be Our Guest was quite the pleasant experience. We started off by being treated to a tour of the castle before we were seated at our table in the grand ballroom. There was a great attention to detail throughout the layout of the place, with locations from the movie being included such as Beast’s Study, and the forbidden West Wing (which nonetheless still had tables for those unbothered by having to face the Beast’s wrath!). Throughout dinner, Beast made his rounds across the ballroom to greet his dinner guests as the Master of the castle. After dinner, guests were free to meet-and-greet with Beast in his study. 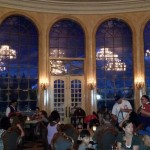 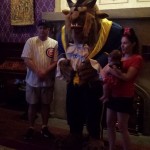 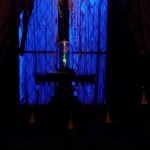 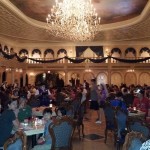 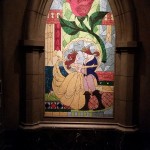 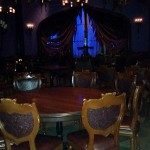 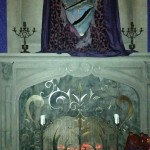 We made it out of Be Our Guest just in time to watch the Happy Hallowishes fireworks spectacular, and then headed over to the front of Cinderella’s Castle to catch the Hocus Pocus Villain Spelltacular. This is a new event for 2015, and I have to say it definitely was the highlight of our night. The premise of the show is the Sanderson Sisters from the movie “Hocus Pocus” have returned to throw the biggest, best Halloween Party ever. They then summon the help of a number of classic Disney Villains, including Maleficent, Oogie Boogie, and Dr. Facilier (aka Shadow Man), among others. 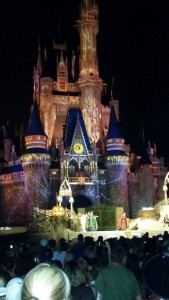 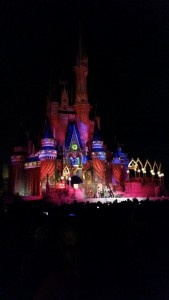 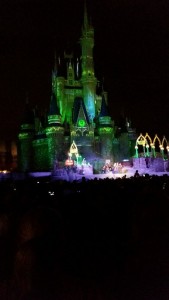 After the show, the babies were starting to get cranky, so we headed towards the exit right as people were beginning to gather to watch the last “Boo-To-You” parade of the night. Before leaving, we stopped by the firehouse on Main Street to grab some 2015 Mickey’s Not So Scary Halloween Party collector’s cards. All in all, we very much enjoyed the event, even though we didn’t get a chance to take advantage of the short ride lines. We definitely will make frequenting this event a habit!

Has anyone else been to Mickey’s Not So Scary Halloween Party or planning to attend? Feel free to comment below!