We Say Farewell to Roar on National Roller Coaster Day

August 16th was the final day of operation for Roar, the Great Coasters International wooden coaster that has carried over 11 million riders at Six Flags Discovery Kingdom since it’s opening on May 15, 1999.  While it doesn’t have quite the history of some recently closed wooden rides (like say Thunder Road at Carowinds), the ride has been a mainstay at Discovery Kingdom since near the beginning of the park’s life as a combined animal/amusement park, and does hold several notable firsts.  I stopped by Sunday to enjoy some final rides and bid farewell to the early GCI coaster. 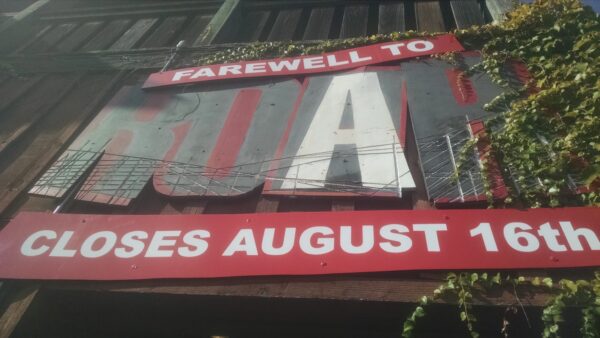 A Brief History of Roar

First, a quick history of (and some facts about) Roar, also known as Roar West to avoid confusion with the older Six Flags America GCI coaster.  The ride opened in 1999, and was the third major coaster built at the park after Six Flags took over and began the transition from a pure animal park to the hybrid animal park and amusement park it is today.  It was also the first coaster designed specifically for the park, as the previous two had been Boomerang, a standard Vekoma shuttle coaster, and Kong, which had previously been at Opryland USA.  The park says the name for the ride comes from the roar of local California sea lions, several of which are featured in shows at the park.  When it opened it was the tallest wooden coaster in Northern California, a title it held until the opening of Gold Striker at California’s Great America in 2013, and it still held the title of longest wooden coaster in the region at closing.  Roar was the just the third roller coaster built by Great Coasters International, and probably the most notable fact about it is that it was the first ride to use their signature Millennium Flyer trains (check out our interview with GCI to learn more about their design and build process).  The introduction of the Millennium Flyers allowed the layout to be have tighter turns and smoother transitions than the East Coaster version, and they are a large part of the reason the Roar West has stayed smooth (and fun) during it’s seventeen season run.   The rides roughness has been a little up and down over the years, but consistent maintenance, including some re-tracking work a couple years ago, has kept it running solidly.

In the foreground of the view from the parking lot.

The park officially had its send off for Roar from noon to 7PM on Sunday.  It also happened to be national roller coaster day, so I arrived in the early afternoon trying to pack in at least several Roar rides (and a few other coasters).  It seems Roar decided it wanted its send off to be a toasty one, as it happened to also be the hottest day of the summer in Vallejo, hitting 101 degrees in the afternoon.  I think this likely played a role in helping to keep the crowds down, which I of course appreciated. 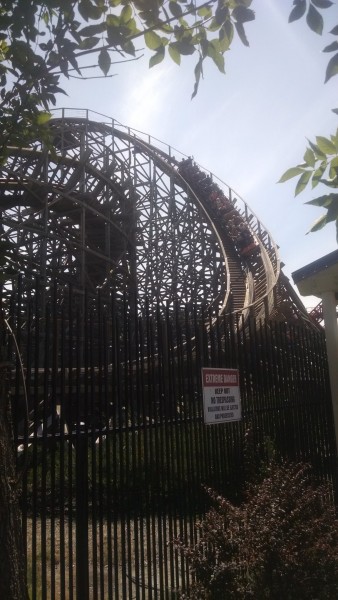 Park employees were almost all wearing farewell to Roar shirts, and everyone from the parking attendants to the security at the entrance was reminding guests that it was Roar’s final day and encouraging them the ride.  After snapping a couple pictures near the park gate, we made our way to Roar to start.  Near the entrance for Roar was a DJ both playing music all day, and park employees on the mic were sharing Roar facts and speaking with the guests in line.  In addition a “Coke Zero” tent was handing out free coke zero samples (much appreciated in the heat), and there was a tend set up with a small band playing music further down the line from the DJ.  The employees by the line and the operators were all having a good time, enthusiastically interacting with the crowd.  One of my favorite exchanges was the DJ asking if any guests in line were riding for the first time, and then pointing out to the enthusiastic respondents that it was too bad it would likely be one of their last times too.  The dispatcher on the ride itself was enthusiastically encouraging guests to skip the other attractions at the park and just keep riding Roar.  I approved. 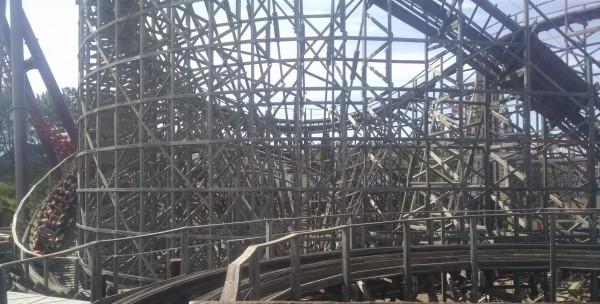 View from the station of one of the twisted turns, about to cross under the track.

The line early in the afternoon was relatively short, so we started with the front row ride, behind the classic Millennium Flyer grate.  The ride felt even smoother than it was earlier in the year, and was an instant reminder what a solid ride it was.  One of my favorite things about Roar is that the track layout is very hard to decipher from looking at it.  With six reversals and 22 crossovers, the layout get confusing (even after riding it four times yesterday), and the complex path helps keep it from feeling stale on repeat rides, a feature I find to be the case on a lot of GCI coasters. 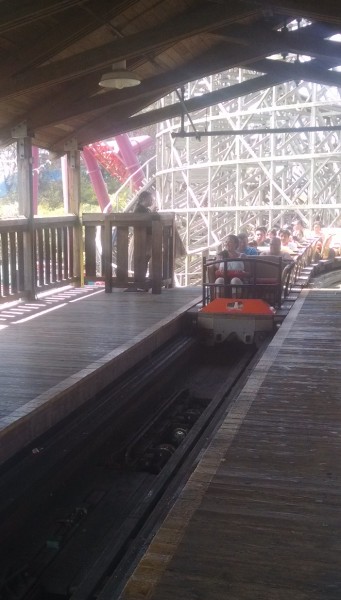 Following the front, and a stop at Superman, we returned to give it a ride in the back.  Although a little rougher than the front row, as expected, it was less shaky than I remembered and provided a very fun ride.  It felt noticeably faster, and while it doesn’t have as much air as some newer rides, like Gold Striker, there are several solid negative-G moments.  A small air time bump as soon as the train enters the long tunnel in particular gives a great little float.  Roar also has one of my favorite pre-lift sections, with a quick zig-zagging path under the return track, showing off the tight twists Millenium Flyers are famous for. 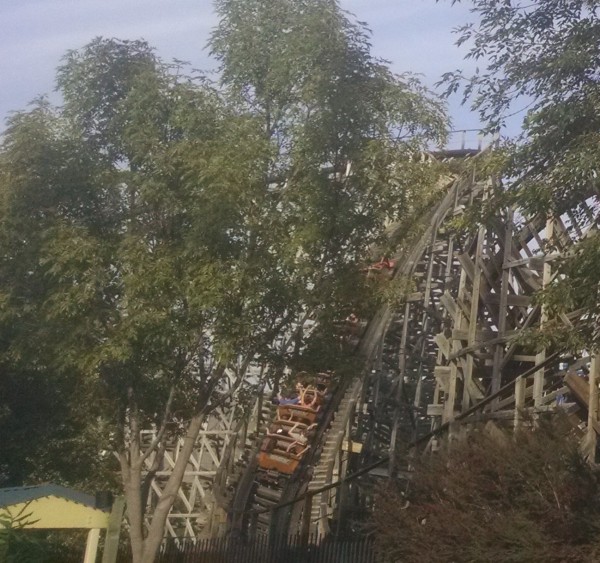 The heat necessitated some breaks from Roar since it doesn’t have a shaded queue, but after catching one show and hitting Medusa and V2 (which luckily coincided with a small breakdown on Roar, a not too infrequent occurrence that may be part of the reason for it’s closure), we returned for some more runs.  The line had grown towards the end day, and was now the longest wait in the park.  Roar T-shirts and authentic pieces of Roar track (from some recent maintenance work) were being given as prizes for Roar trivia questions to nearby guests, as well as being sold in the nearby gift shop as a benefit for a marine mammal charity.  Employees were buying souvenirs and going for rides along with the general public, and I saw multiple people now rocking “Farewell to Roar” shirts.  In addition, local media was out at the park all day getting footage of the ride, I’ve included some links to some of their articles and footage at the end of the post. 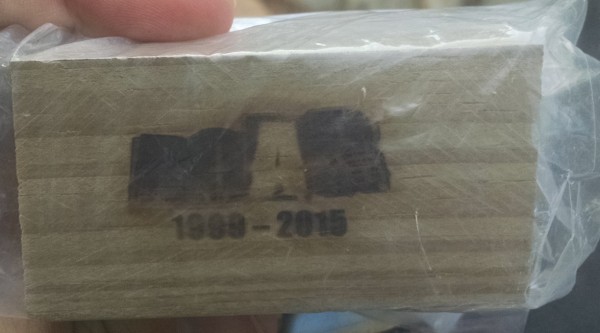 I managed to get in two more rides, both in the middle.  The ride operations were some of the fastest I’ve ever seen on Roar, and the crowds (and operators) some of the most enthusiastic.  Actually, most of the operations at the park were some of the best I’ve seen all year, maybe they were inspired by the combination of Farewell to Roar and National Roller Coaster Day?  After these last two rides I decided to call it, taking some more pictures as the last riders enjoyed the final Roar cycles. 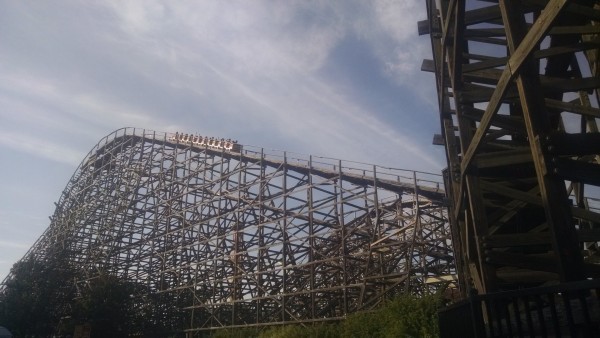 This final day of Roar reaffirmed what I had always thought about it.  It’s a very solid coaster.  The elements of all GCI coasters that I love, the tight twists, small airtime bumps, disguised layouts, and feeling of consistent speed, are all evident even in this early example.  It’s one of those rides that I can immediately tell is a GCI, even though it’s 10 years older than Apocalypse at Magic Mountain and 14 years older than Gold Striker, the two other California GCI designs.  It’s far from the worst ride at Discovery Kingdom, and far from the worst wooden coaster in the west, so in a lot of ways it’s sad to see it go.  But hopefully it’s not going away completely, and not for long… 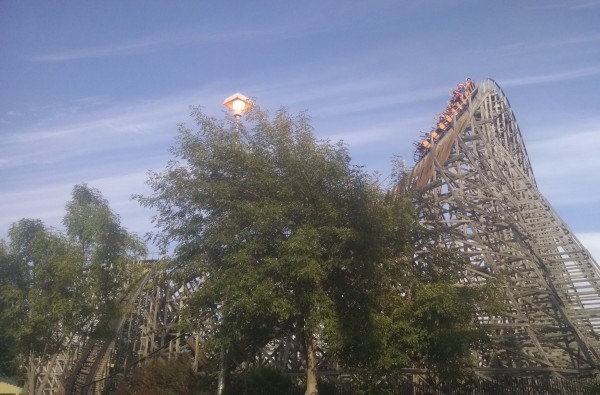 So what’s next for Roar?  Well, nothing has been officially announced, but the likelihood is that it’s not actually gone for good.  Rocky Mountain Construction, the company famous for it’s “hybridization” and rebuilding of old wooden coasters, like Twisted Colossus at Southern California’s Six Flags Magic Mountain, was hiring in California earlier this year.  The closure of Roar is happening at almost the exact same time Colossus closed at Magic Mountain last year, and there have been piles of construction materials spotted near Roar.  All signs are pointing to RMC conversion coming this off-season.  This will be the first time a GCI coaster has been redone, and it’s one of the newest coaster to get a conversion.  On the plus side, RMC’s work has been well received everywhere, and there’s a good chance that, as one poster on a message board put, they will turn “a good ride into a great ride.”  Six Flags is planning their official announcements for September 3, so we should know for sure what’s happening in a couple weeks.  Any guesses what the new name is going to be?  I hope they at least stick with the marine mammal theme (Steel Sea Lion?  Wicked Walrus?  Twisted Pinniped?). 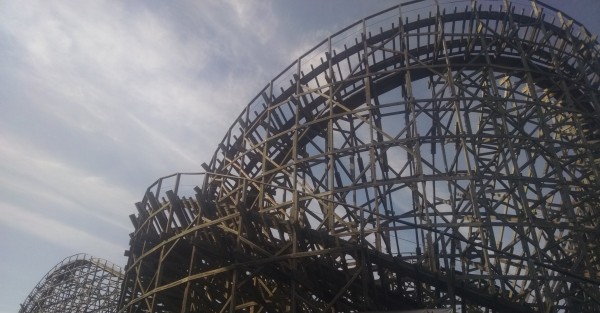 Heres to hoping this beautiful wood structure will still be here next year.

Although I’m excited about the potential of an RMC upgrade, there’s no way I’m not going to miss Roar.  It was always a solid coaster, and it was the genesis of my appreciation for Great Coasters International and their wonderful designs.  I hope this closure isn’t any indications that GCIs will become rarer, but is rather an exception at a park that hasn’t had a new roller coaster since 2012 and had limited options.  As Don McCoy, Discovery Kingdom’s president, said when the closure was announced, “although Roar continues to be a guest favorite, sometimes hard choices must be made to allow for future expansion.” 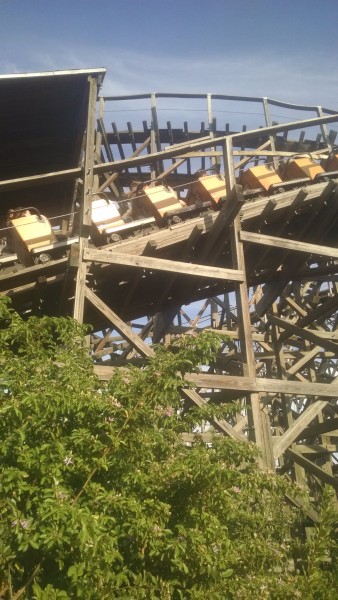 Coming out of another favorite GCI element, the frequent use of tunnels.

At the end of my last ride a father and son were seated behind me.  It was the kid’s first ride on the coaster, and his father asked him at the end what his son thought.  The response? “It was awesome!”  Glad you got to experience Roar, kid, even if only one time.  I hope the next iteration can be even better, and preserves some of the aspects of the original that made it such a solid ride.

Have any thoughts on Roar or other lost coasters?  Let us know in the comments below, and check back with us for announcements on the future of Roar and all other upcoming park additions! 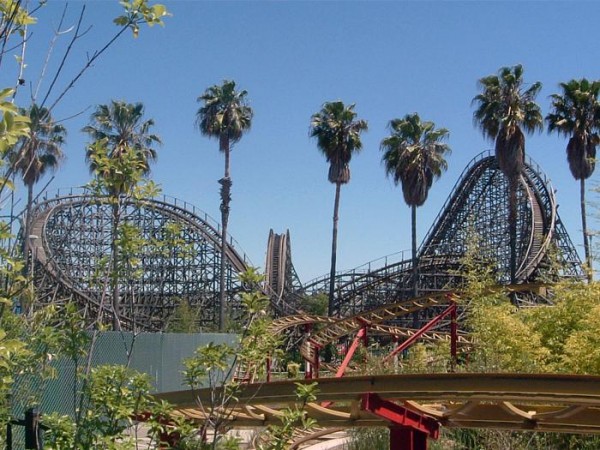 Goodbye Roar, thanks for all the years of fun! (Photo courtesy of Great Coasters International, inc)

– Opened in May, 1999, it was the third GCI coaster, after Wildcat and Roar East.

– The first coaster to use GCIs popular Millennium Flyer trains, allowing for the tight, twisty layout GCI coasters are known for

– Made up of over 1 million linear feet of wood, each piece numbered to fit in place