Carowinds’ Coasters: From Tame to Thrilling

Edit: This article was originally written in 2015, and has been updated to include Carowinds’ “New for 2019” Coaster: Copperhead Strike

I visited Carowinds this past Sunday for the first time as a “regular visitor” this season. After a relatively busy spring, I had only made the four hour round trip trek to the park twice this season — The Media Day for Fury 325 on March 25, and Coasting For Kids on June 7. Both times, I had to focus on one or two coasters, instead of viewing the park as a whole. 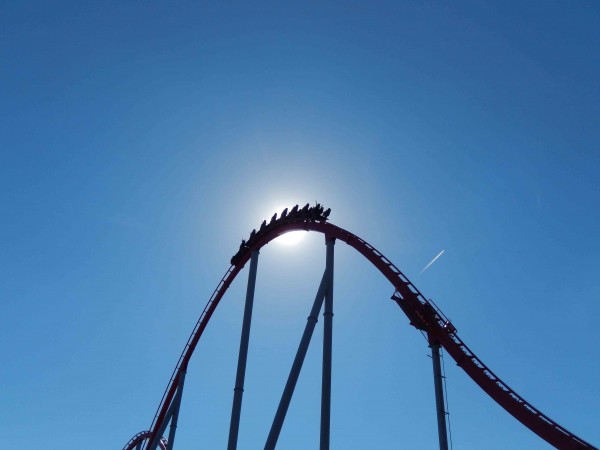 As I was getting off Intimidator, I heard a dad tell his son how proud he was that he had ridden the coaster. I wasn’t near them in line, but I can only assume that there was some apprehension from the son before riding the towering red behemoth at the park’s entrance.

It was then that I realized that Carowinds’ 14 roller coasters provide not only a wide spectrum of experiences, but also a natural progression of sorts that will help those who may be scared of coasters like Fury 325 ease in to bigger and bigger roller coasters until they can eventually conquer the World’s Tallest and Fastest Giga-Coaster. This led me to the realization that Carowinds is an ideal park for both “thrill junkies” and “thrill seekers in training,” as well as everyone in between.

Scared of #Fury325? Intimidator has the speed and air time, with a drop 114' less. Work your way up! @Carowinds pic.twitter.com/nFG9d2No9C

To help potential Carowinds visitors out, I’m going to attempt to create the natural progression of each of the park’s roller coasters, so that even if someone is apprehensive about riding roller coasters, they can eventually work their way to “the top.” (And by top, I clearly mean 325′ in the air!) 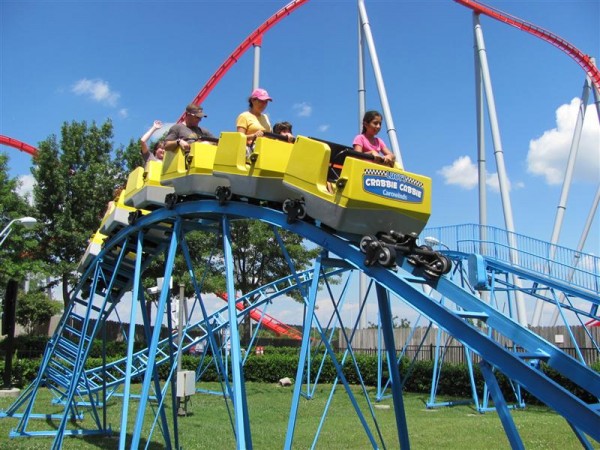 Originally opened in 1998 as Taxi Jam, and later Hey Arnold’s Taxi Chase, Lucy’s Crabbie Cabbie is a great ride for even the youngest of roller coaster fans to start their fascination with roller coasters. You could put the 15′ tall Lucy’s Crabbie Cabbie on top of the 305′ tall Statue of Liberty, and it would still fit comfortably under Fury 325’s first drop. With a maximum speed of 15 miles per hour and a minimum height restriction of 36″, this coaster is a wonderful option for a “first coaster ride” for families with young children. 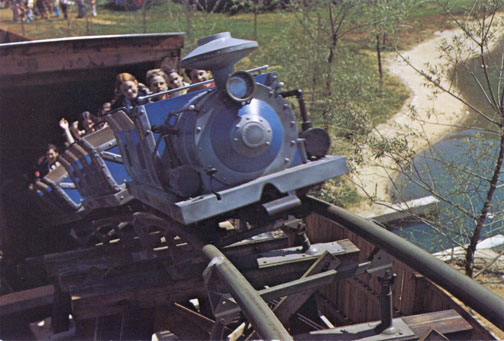 One of Carowinds remaining opening day attractions, Carolina Goldrusher, is next on my list. This classic Arrow-designed steel mine coaster still has a few nice touches, including the original restraints that lock in the three rows of each car at once, and a tunnel near the end of the track. Though slightly faster (30 mph max speed) and with a higher minimum height (48″) than several coasters lower down on this list, the Carolina Goldrusher’s smooth ride experience and history make it the next logical step in Carowinds’ coasters for me. I rode this coaster back to back on Sunday, and it’s held up wonderfully after 42 years. 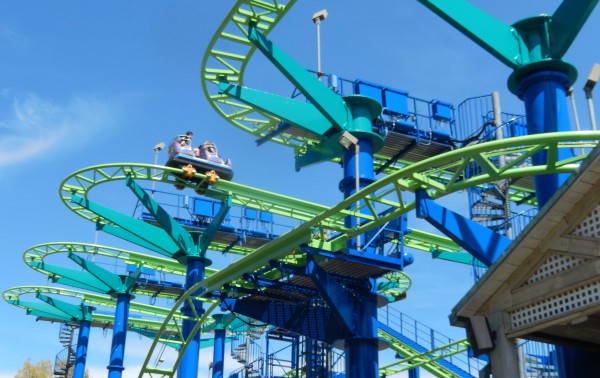 The Mack Rides Wild Mouse Coaster “Ricochet” is next. It’s not the tallest or the fastest, but like any Wild Mouse coaster, the tight hairpin turns and sudden dips make you feel like the coaster is more intense than it actually is, when in reality, you’re only traveling at 28 mph, less than the speed limit of many residential areas. Ricochet’s small four-passenger cars make riders feel as if they are taking each turn on two wheels. Ricochet is a perfect family coaster, featuring a minimum height requirement of 44″, but riders who are between 44″ and 54″ inches must be riding with a supervising companion. 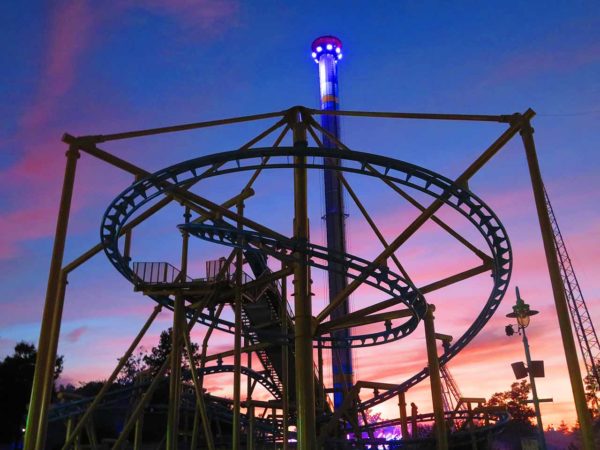 A 2003 addition to Carowinds, Kiddy Hawk, named for the North Carolina town where the Wright Brothers took their first flight, is the park’s Vekoma suspended family coaster. With a maximum height of 50′, Kiddy Hawk is less than half the height of Afterburn, Carowinds’ “major” inverted coaster, and gives “thrill seekers in training” a chance to experience the feeling of riding with their legs dangling before graduating to higher inverted coasters. Kiddy Hawk was a great move by both Vekoma (in creating the Suspended Family Coaster) and Cedar Fair (by bringing it to Carowinds) because there are only a handful of similar coasters in the United States that provide this experience. 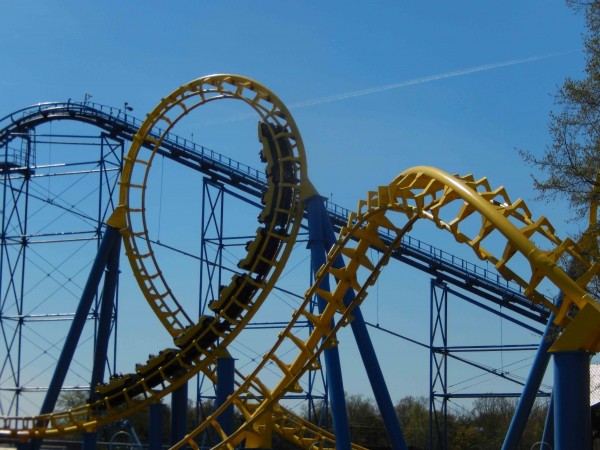 The Arrow Dynamics-manufactured Carolina Cyclone originally opened at Carowinds in 1980. When it opened, it was the first roller coaster in the world with four inversions, featuring two back-to-back loops, and two back-to-back corkscrews. Carolina Cyclone only has a drop of 65 feet, and a top speed of just over 40 mph. If you think you can handle the height and speed, then you won’t be overwhelmed by those two things here. Carolina Cyclone is a smooth ride, and it will be over before you know it! 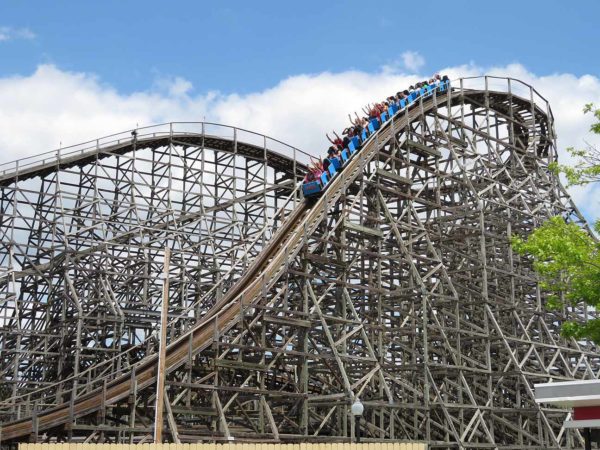 Carowinds’ second wooden coaster, Hurler, has been thrilling guests for the last 21 years. Hurler received some retracking work in the winter of 2014. The first drop transition into the coaster’s first sweeping turn is amazing, smooth and filled with speed. The other curves (that haven’t yet gone under the GCI knife) provide a more traditional wooden roller coaster experience, resulting in a more intense ride.

Now boasting 96 Coasters, Bolliger and Mabillard’s opened their third roller coaster with Carowinds’ Vortex in 1992. Again, not the tallest or fastest in the park, but the unique “stand-up” element through over 2,000 feet of track provides a very unique ride experience. You almost feel like you’re running through the two inversions at 50 mph. Vortex was the one coaster we wanted to get to on Sunday, but were unable to do so because of time. But it’s a good transition coaster to “cut your teeth on” before heading into “Thrill Junkie” territory. 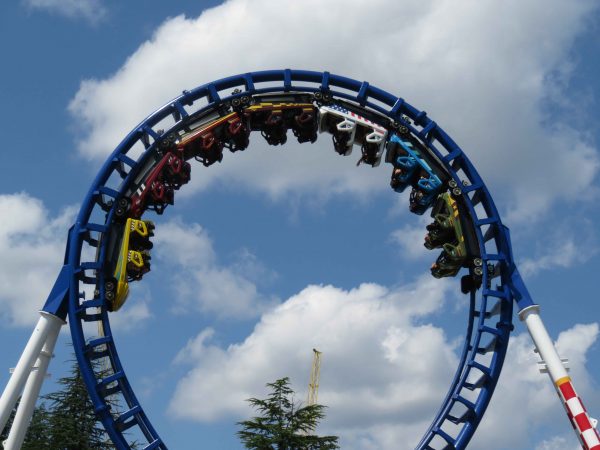 The Flying Cobras (formerly Carolina Cobra), which was relocated to Carowinds from Geauga Lake (As Head Spin) in 2008, is one of more than 50 Vekoma Boomerang coasters in existence today. It’s the first coaster on my list to eclipse the 100′ mark, reaching heights of 125′. Though The Flying Cobras is not amazingly fast, the coaster does travel both forwards and backwards through a cobra roll and a vertical loop, resulting in a disorienting six inversions in just a matter of seconds. Taking the inversions in reverse is a feeling not felt on most roller coasters, which is why I’ve placed The Flying Cobras first in “Level III” of my list. 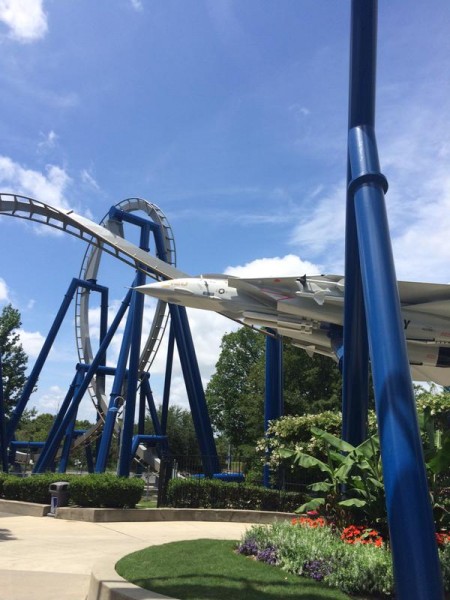 Afterburn was originally named Top Gun: The Jet Coaster when it opened in 1999. For that reason, I (along with many others) still slip up and call it Top Gun from time to time. A B&M Invert, Afterburn rises 113′ in the Carowinds skyline, and reaches a maximum speed of 62 mph. It has six inversions — a vertical loop, immelman, zero-G roll, batwing and corkscrew. Combined with the “inverted” element with your feet dangling during the nearly three minute ride, Afterburn is a great test for thrill junkies at Carowinds. I rode it ten times in two hours during Coasting For Kids, each time just as exciting and intense as the first. 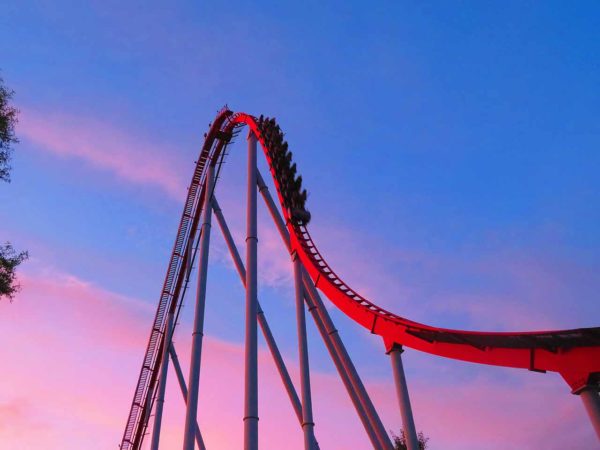 We’ll look a little higher in the sky for the next coaster, Intimidator. Classified as B&M hypercoaster, starts near the park entrance, and wraps around the far southeastern corner of Carowinds before turning around and heading back to the entrance. The first drop of Intimidator is 211′ feet high, and is followed by 4 hills standing 90′ or higher. Like the coaster’s namesake, NASCAR driver Dale Earnhardt Sr., Intimidator is a bit of a speed demon, clocking in at 75mph, good for second fastest coaster at Carowinds. If you love speed and airtime, but aren’t the biggest fan of inversions, Intimidator is the coaster for you. 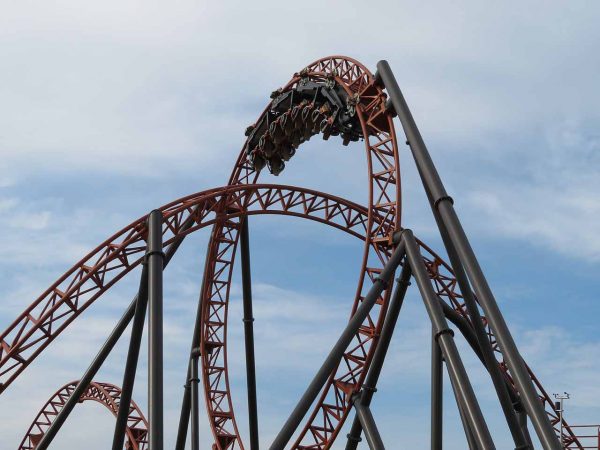 Carowinds’ newest coaster isn’t as intense or terrifying as other coasters on this list, but still deserves a place near the top. Copperhead Strike, from German ride manufacturer MACK Rides is billed as the Carolinas’ first “double launch” coaster, featuring two LSM launches from 0-42mph and 35-50mph. Each of Copperhead Strike’s five inversions (two vertical loops, an inverted top hat, a corkscrew, and the infamous JoJo roll to start the ride) all pack a bit of “bite” on their own, but where this coaster really shines is in it’s hangtime, especially on the first loop and in the inverted top hat. (Not to mention, the airtime is amazing, especially following the first loop, and in the Stengel dive following the second loop!) 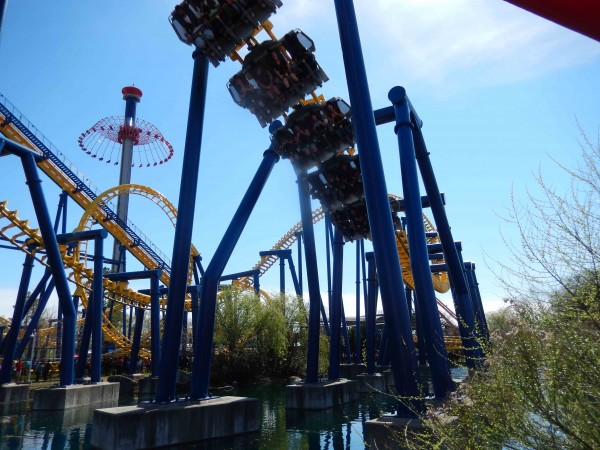 On Twitter, I compared Intimidator to Fury 325, saying you could use Intimidator to work your way up to conquering Fury 325, so logically you’d think they would be next to each other in my list. Normally they would be, if not for the Vekoma Flying Dutchman Coaster, Nighthawk. In a class all its own, Nighthawk is perhaps one of the most unique coaster experience that Carowinds has to offer. Classified as a “Flying” roller coaster, riders are loaded, and then the seats rotate backwards. From there, it’s tough to tell which way is up as riders experience five inversions including several “lie-to-fly” and “fly-to-lie” elements. If you can handle Nighthawk, you can handle anything at Carowinds…including… 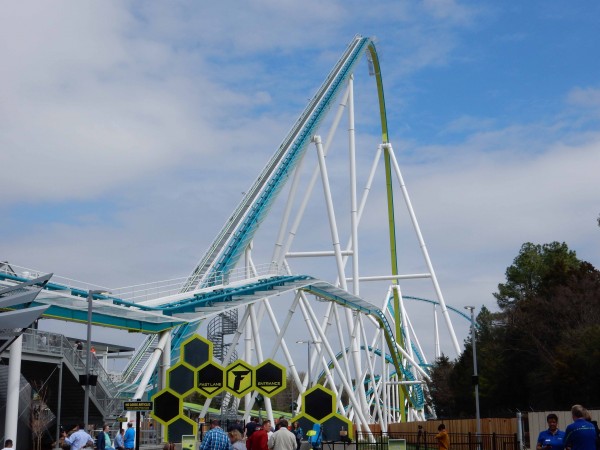 There’s not much more you can say about Fury 325 that hasn’t already been said. The tallest and fastest giga coaster in the world. 6,602 feet of track. 325 feet high. 81 degree drop. 91 miles per hour. The “Hive Dive.” Three minutes and 25 seconds of pure speed and adrenaline. Fury 325 towers above Carowinds and can be seen for miles, only building the anticipation when arriving at the park. Screams fill the park entrance as the coaster flies over, then dives under Carowinds’ main entrance. It provides one the biggest thrills at Carowinds, and definitely isn’t for the faint of heart.

But you worked your way to the top from Lucy’s Crabbie Cabbie, so you’re ready for it, right?

What do you think about this progression? Do you have a similar series at your home park? What was your first coaster that allowed you to work your way up to monsters like Fury 325?