The new downtown Springfield area of Universal Studios Hollywood is now officially open, transforming the area of the park around the Simpsons Ride that opened back in 2008!  The primary highlights of the new area mostly revolve around all of the new Simpsons related food and drink offerings that will be available at places like Moe’s Tavern and Krusty Burger. 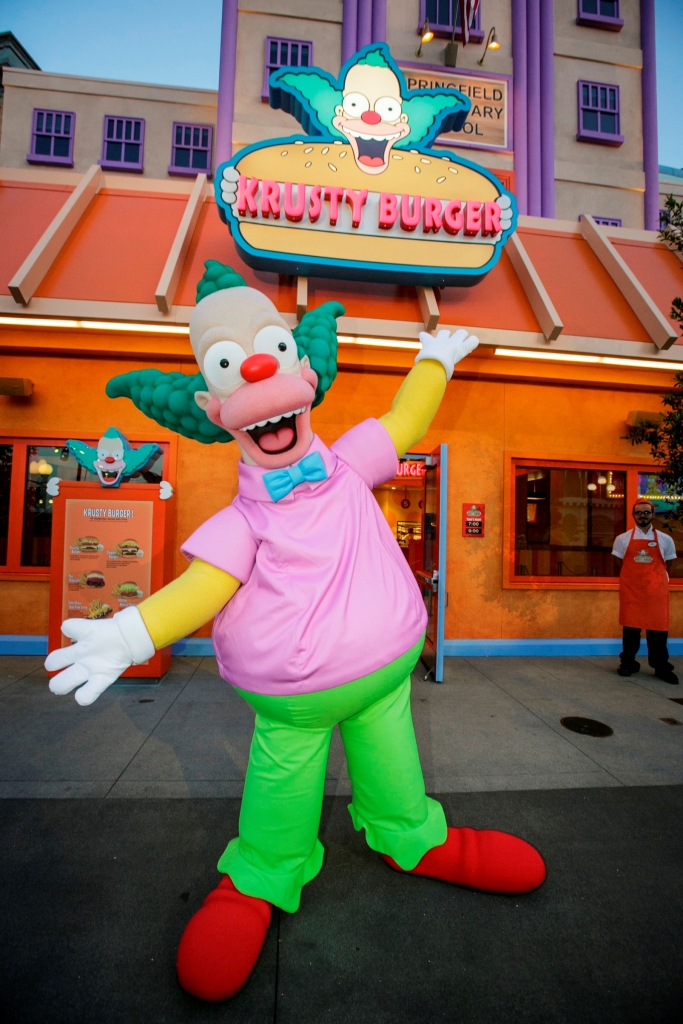 Universal celebrated the opening with cast and crew from the show, and of course the characters from the town making their intro (plus some nice special effects in true Universal fashion, check out the awesome grand opening in the video from Attractions Magazine below).

“This is a must-see experience for Simpsons fans all over the world,” said Mark Woodbury, President of Universal Creative. “In spectacular fashion, guests can now enter an animated world that they’ve only seen on television – and we’re really excited to bring that world to life.” 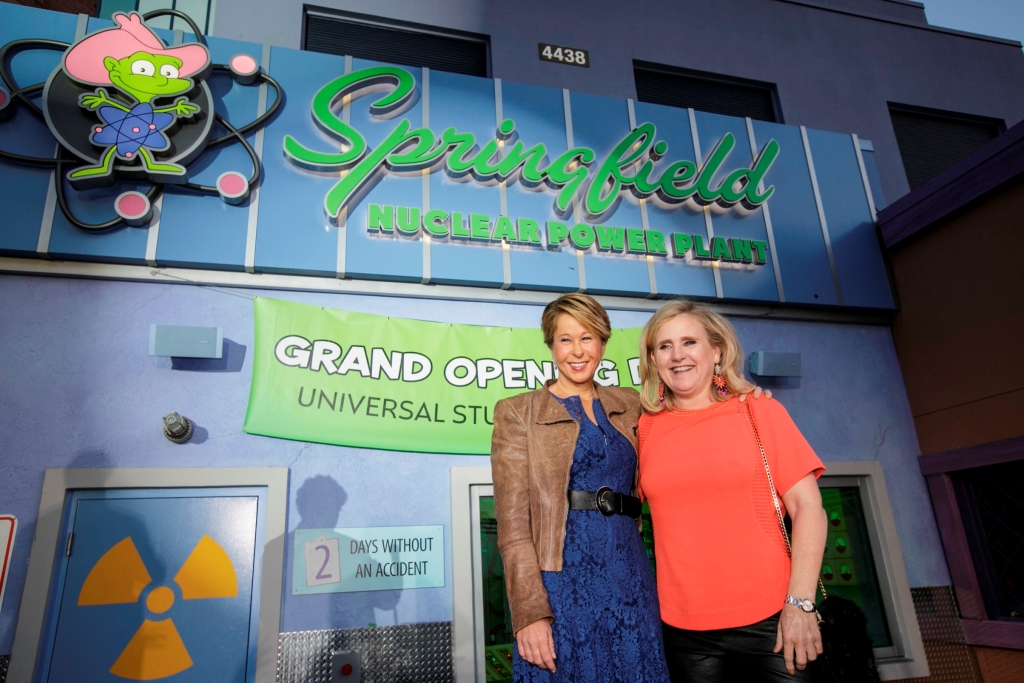 Yeardley Smith and Nancy Cartwright, voices of Lisa and Bart respectively, celebrate the opening of Springfield in front of the nuclear plant.

Springfield is filled with landmarks from the town, recognizable to everyone who has watched the show at any point in it’s 26 season run.  Some of the notable landmarks in addition to the places mentioned above include the Android’s Dungeon (the Comic Book Guy’s shop, Springfield Elementary, and of course the iconic cooling towers of the Springfield nuclear powerplant. 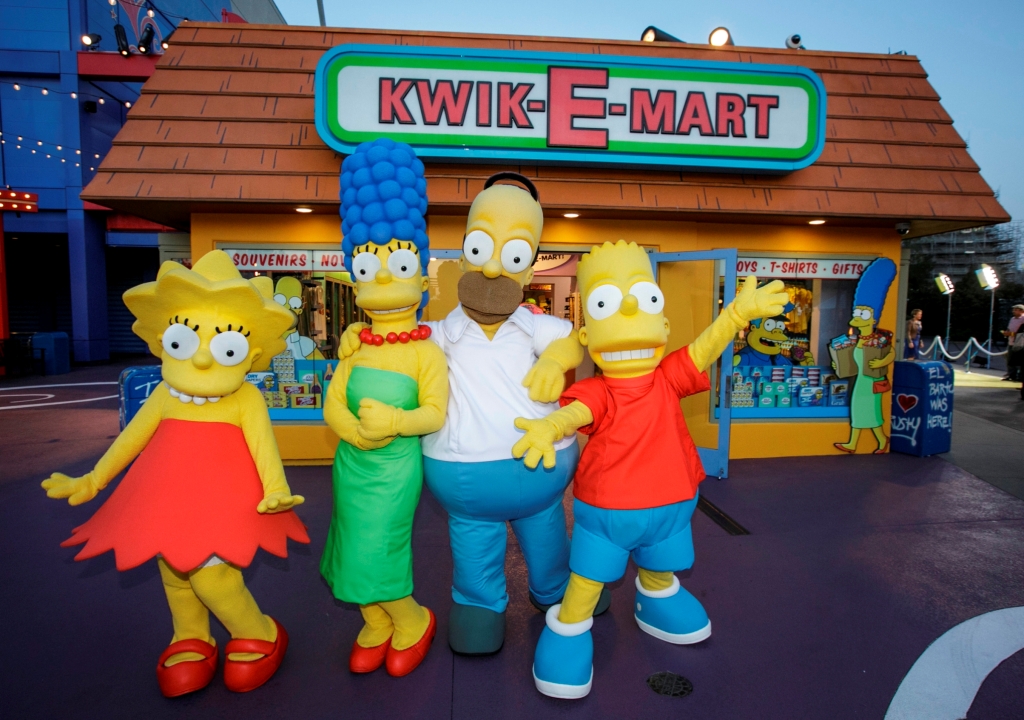 The Simpsons Family outside the Kwik-E-Mart.

The new restaurants and meal options range from the aforementioned Krusty Burger (featuring the Krusty Ribwich), and slices at Luigi’s Pizzeria to fried chicken at Cletus’ Chicken Shack (presumably the former Doc Brown’s Chicken) and Taco’s from the Bumblebee Man’s taco truck.  For your after dinner dessert options include Phineas Q. Butterfat’s ice cream parlor and, of course, Lard Lad’s donuts.  Actual Duff Beer (brewed specially for Universal) can be had at Moe’s, as well as at a Duff Brewery and a Duff Beer Garden. 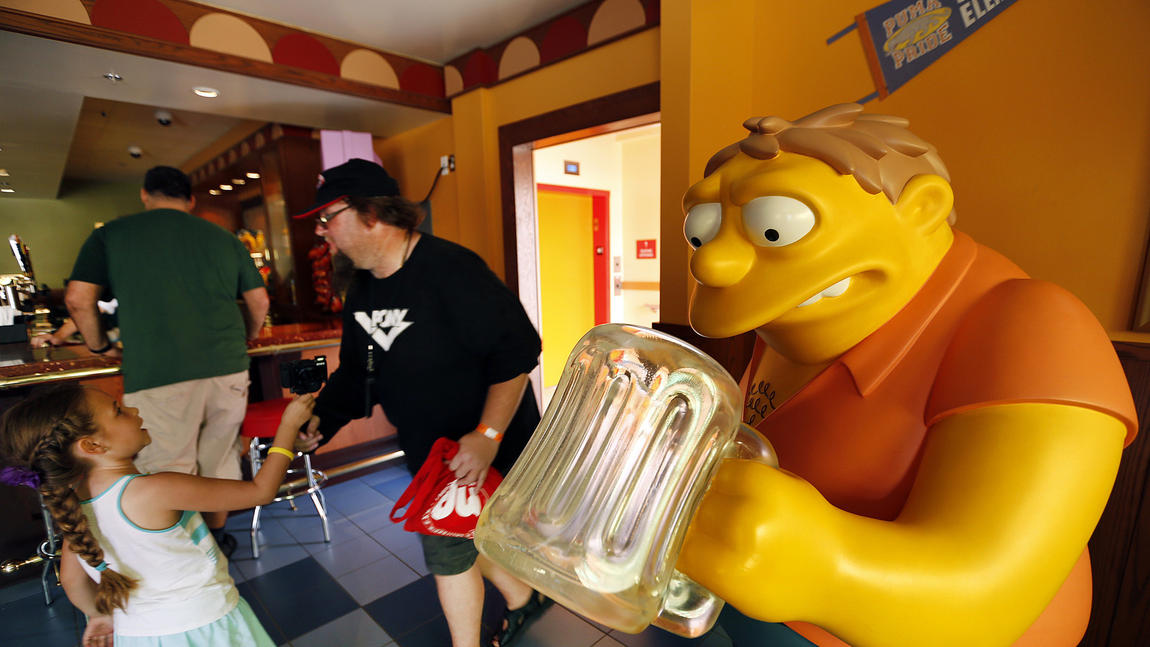 Barney looking longingly at his empty mug inside Moe’s.

The official opening of Springfield adds a much more immersive feel to the upper lot of Universal Studios Hollywood.  “As Universal Studios Hollywood celebrates its 50 year milestone celebration, the introduction of Springfield underscores the extensive transformation underway to engage guests in dynamic and relevant, immersive entertainment,” said park president Larry Kurzweil.  This new level of immersion is going to be furthered next year when the Wizarding World of Harry Potter opens at the park. 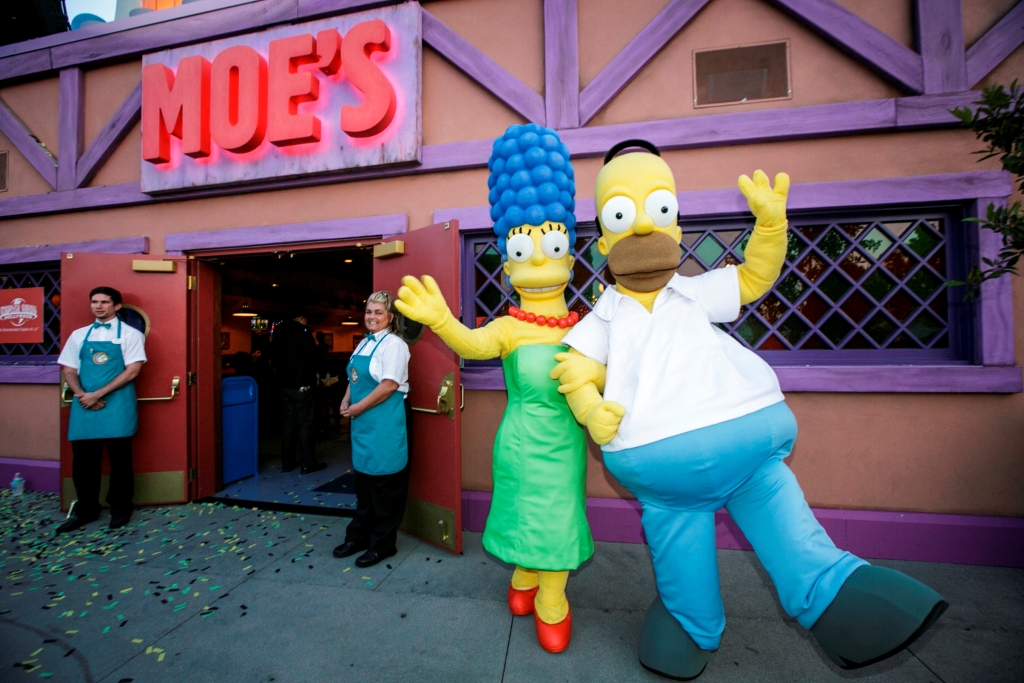 For more information on Springfield and Universal Studios Hollywood check out their official site here.  In addition, we’ll have more in the near future on the park’s 50th anniversary celebration in the near future, so stay tuned to Coaster101!