According to this Sandusky Register article, Cedar Point could potentially be building a Bolliger & Mabillard Dive coaster for the 2016 season. A memo from B&M was found and filed with Cedar Point containing a proposal to build a $15 million Dive coaster in the spot where the demolition of the Good Time Theatre is taking place.

“The memo is one of many proposals Cedar Point is looking at for the 2016 season,” said Bryan Edwards, spokesman for Cedar Point.

“Our focus is on the 2015 season and launching Rougarou as well as our newly transformed Hotel Breakers,” Edwards said. 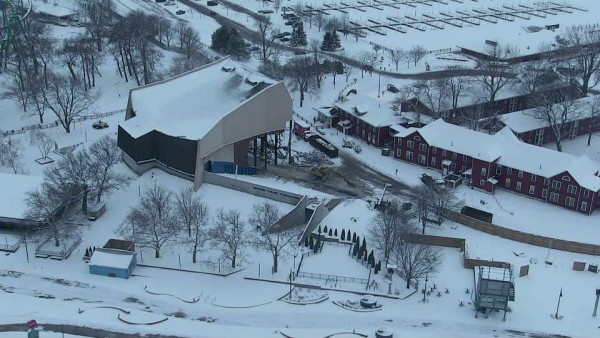 Demolition of the Good Time Theatre via Cedar Point’s webcam

Preceding this, there was no rumor when Cedar Point could be receiving their next coaster as their latest coaster, Gatekeeper, was built in 2013. One of the Triotech dark rides was rumored to be coming to Cedar Point in 2016 in the spot where Good Time Theatre was, but this could mean Cedar Point might be seeing a new coaster in that location instead.

Cedar Point has neither confirmed nor denied this news, so whether or not this B&M Dive coaster could become a new attraction in 2016, we’ll have to sit back and wait through the 2015 season to find out.

With this new information, the pricing of the coaster and what it contains is very feasible.  Not only would it take the record of most inversions on a dive coaster, it’ll also be the park’s 3rd tallest roller coaster, overtaking Magnum at 205 ft. It’s also rumored that Cadillac and Turnpike Cars could also be removed for this expansion.

What are your thoughts on this potential new development? Post your comments below!