I was visiting a friend in the Dallas area last weekend, and when I made the plans to travel and see him, I knew that Six Flags Over Texas, the original Six Flags park, had to be on our to-do list. Originally opened in 1961, the park has been a major attraction in the Dallas area for over 50 years. It was my first visit to the park.

We arrived at the park about 20 minutes before the park opened. It was very overcast and misty, and rain was scheduled in the forecast for most of the day. Based on the weather and the time of year, we didn’t anticipate very heavy crowds. At least that was the hope.

As we walked in, we quickly decided that New Texas Giant was going to be our first ride of the day. After walking through the “Spain” area of the park, we were met by a security guard monitoring an area for Six Flags Gold Pass Holders’ Exclusive Early Ride Time. There was a rope that would drop when the rest of the park would open to the general public at 10:30.

We struck up a conversation with the security guard, who seemed genuinely confused as to why we would pay for a ticket to the park on a day where the weather was supposed to be terrible. I told him that I couldn’t predict the weather two months out when I bought my plane ticket. I’m not sure if he thought I was funny, or felt sorry for us, but he let us around the rope 10 minutes early, and we joined the limited numbers of passholders who decided to brave the elements. 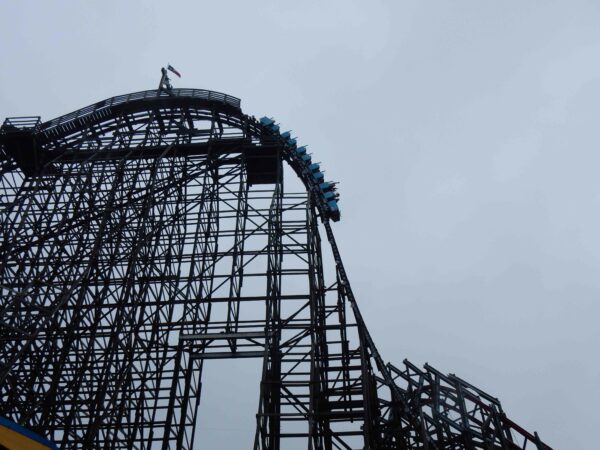 We headed toward New Texas Giant, and immediately were able to get a seat in the front row, no waiting. When it opened in 1990, Texas Giant was the tallest wooden roller coaster in the world. In 2009, Texas Giant closed to make way for the New Texas Giant, the first roller coaster to make use of the Rocky Mountain Construction I-Box Track, replacing the wooden track with steel.  It was my first experience on a Rocky Mountain Coaster, and I was definitely impressed. It was incredibly smooth and its twists and turns were unlike anything I’ve ever experienced on a roller coaster.  We rode in the first row, and immediately re-rode in the back row. Just as wild in the back. I can’t wait to see what Rocky Mountain does with Twisted Colossus at Magic Mountain and Wicked Cyclone at Six Flags New England. 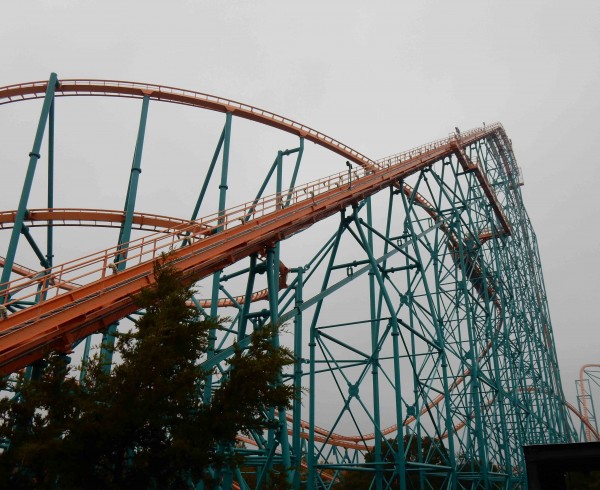 From New Texas Giant, we walked over to Titan, the tallest and fastest roller coaster in Texas, and the first Giovanola coaster I had ever ridden. At 245′ tall and reaching speeds of 85 miles per hour, the height and speed of Titan were impressive. We rode once in the front, and once in the back. I later read online that Six Flags’ park policy prohibits immediate re-rides on Titan, due to the excessive G-Forces. After two rides, I can see why the park enacted this policy. 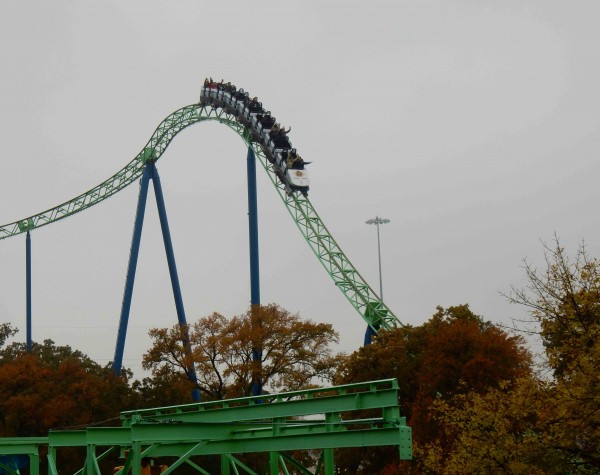 The Schwarzkopf Looping Coaster, Shock Wave, was up next. Paul from NegativeG.com tweeted us and suggested a ride in the back seat of the coaster, noting that the air-time on Shock Wave (biggest drop: 106′) was better than the air-time on many hypercoasters. After two rides, one in the front, one in the back, I’ll agree with Paul. The air time, especially for a coaster that opened in 1978, was impressive.

Our journey around Six Flags Over Texas continued with the S&S Superman Tower of Power. Pretty standard launch and drop, nothing too special. It did end up being our longest wait of the day, and that was just because they were opening the third of three towers, and had to dry off and prep the seats. (Yes, the park was that dead.) 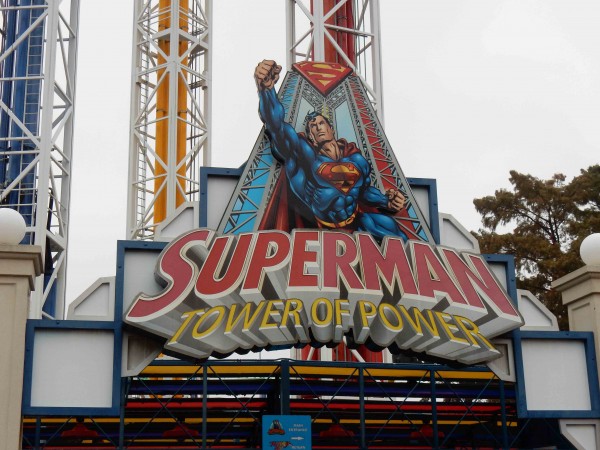 I want to preface the next ride we rode with a YouTube Video.

Mr. Freeze opened at Six Flags over Texas in 1998. The LIM-Launched Shuttle Coaster blasts riders from 0-70 miles per hour in four seconds, and takes them through an inverted 150′ top hat, into a 105′ overbanked turn, and straight up, only to freefall and repeat the track in reverse. Two years ago, Six Flags decided that this coaster wasn’t crazy enough, and decided to launch the trains in reverse from the station. The reverse launch was a new experience for me, and I can safely say that Mr. Freeze Reverse Blast has dethroned Superman: Ultimate Flight at Six Flags Over Georgia for the honor of “Roller Coaster that scared me the most.” 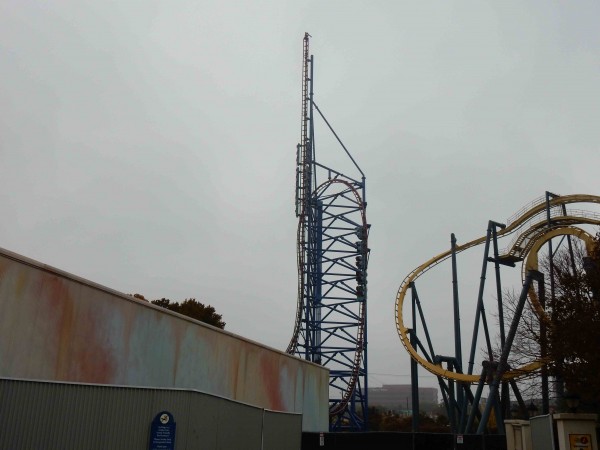 Not to be outdone, Gotham’s other roller coaster, Batman: The Ride (yes, the Batman: The Ride clone from several other Six Flags parks) has reversed its trains for the 2014 season. This was the first time I had ridden a non-shuttle roller coaster backwards. Honestly, I wasn’t a fan of the ride in reverse, but it was an interesting feeling going through multiple inversions backwards. It may have been the multiple coasters in quick succession, but I left the ride needing a break. 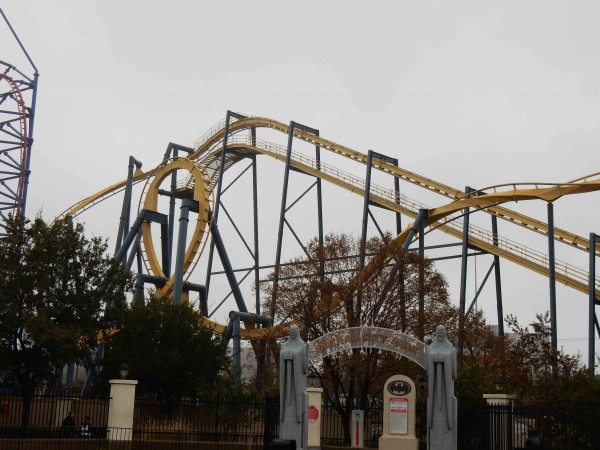 After a quick lunch, we made our way to the Runaway Mine Train, which received ACE Coaster Landmark status in 2006. The park map designated it as the first steel tubular track roller coaster, an honor which I always thought belonged to the Matterhorn Bobsleds at Disneyland. Runaway Mine Train opened in 1966, after the Matterhorn opened in 1959, but I’m sure there is some designation/loophole as to why Six Flags is claiming that it was the first. Regardless, the ride experience was very enjoyable, and concluded with an underwater tunnel, which I thought was a nice touch. 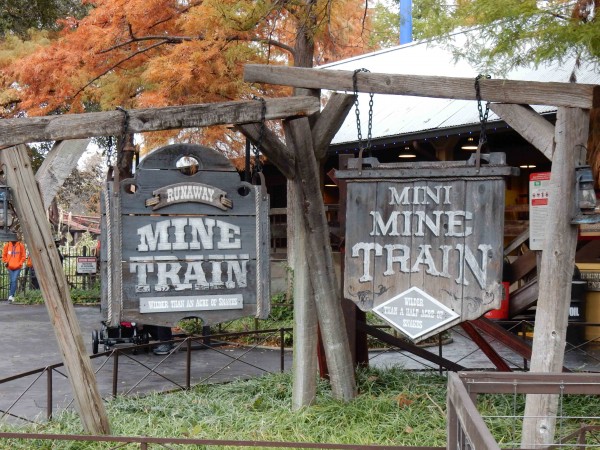 They say everything is bigger in Texas, and the Texas Sky Screamer was no exception. The second tallest of the Sky Screamers at Six Flags Parks (Six Flags New England’s version is 409 or 403′ feet tall, depending on who you ask), the Texas Sky Screamer towered over the park, visible from almost any point in the park. After Windseeker at Kings Dominion, I told myself I’d never ride an attraction like that again. After Windseeker at Cedar Point, I told myself, “seriously, never again.” After Windseeker at Carowinds, “Are you insane? Stop riding these rides!” So of course, I rode the Sky Screamer in Texas. Differing from the Windseeker’s fixed seat, the Sky Screamer’s seats were free flowing in the wind. So not only were the seats rotating around a central pole, but they were blowing in the wind, which at 400′ in the air was incredibly scary. I was thrilled to get back on the ground. 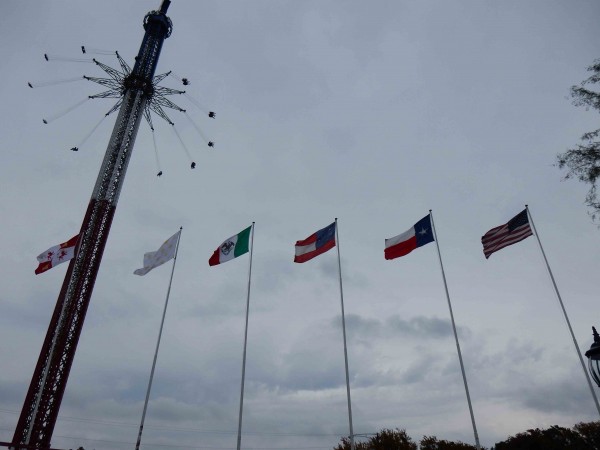 Isolated from the rest of the park, Judge Roy Scream borders a lake near the park’s entrance. This out and back wooden coaster was built with families in mind, and will celebrate its 35th year of operation next season. It still packs a punch, and the views from the ride were great. I’m not the biggest wooden roller coaster fan, but I had been spoiled earlier in the day with New Texas Giant (yes, I know it’s not a wooden roller coaster any more) to really enjoy my ride on Judge Roy Scream. 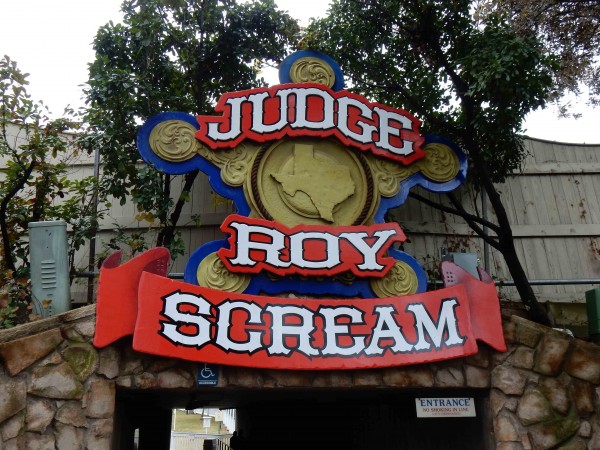 We headed towards La Vibora, the red, yellow, and black Giovanola Bobsled Coaster. Unfortunately, due to the weather, the coaster was not operating. My personal guess would be that it turns into a giant water slide when it rains, and that’s not necessarily the safest thing for Six Flags guests.

Our last coaster of the day ended up being Runaway Mountain, an indoor coaster from Premier Rides. I can’t tell you much about this ride, because it was the darkest I have ever seen an indoor coaster. Pitch black. There were some great drops though.

As we exited Runaway Mountain, the rain started coming down steadily. After 8 roller coasters, we were ready to call it a day.

I hadn’t been to a Six Flags park in years (Last was Six Flags Over Georgia in 2007), but I was definitely impressed by Six Flags Over Texas. The staff was all friendly and helpful, the park was clean, and there was some great theming throughout. New Texas Giant was my favorite roller coaster at the park by far, but that’s to be expected. If you’re ever in the Dallas/Ft. Worth area, I definitely recommend checking out Six Flags Over Texas.