The inaugural Ryerson Invitational T.H.R.I.L.L. Design Competition was held at Ryerson University in Toronto from October 31st to November 1st. The contest pitted teams from Drexel, Waterloo, Guelph, Cornell, and Ryerson universities against each other in three unique challenges:

The judging panel for each event consisted of industry experts from various companies such as Universal Creative and Premier Rides. Coaster101 was graciously invited to help judge the roller coaster design portion of the competition and we can’t thank everyone at Ryerson enough putting on such an outstanding event!

But, before we get to the actual design competition, the students had the opportunity to go to Canada’s Wonderland to get up close and personal with some of the most popular attractions in the park before having to design their own. Here’s a brief recap of our day: 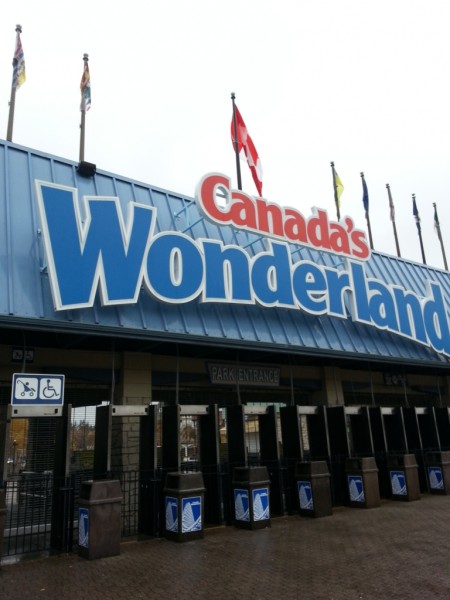 We started the cold and rainy day off inside a theater where Peter Switzer, Director of Maintenance and Construction, spoke to us about Canada’s Wonderland and showed us the Centrifuge Brain Project documentary. 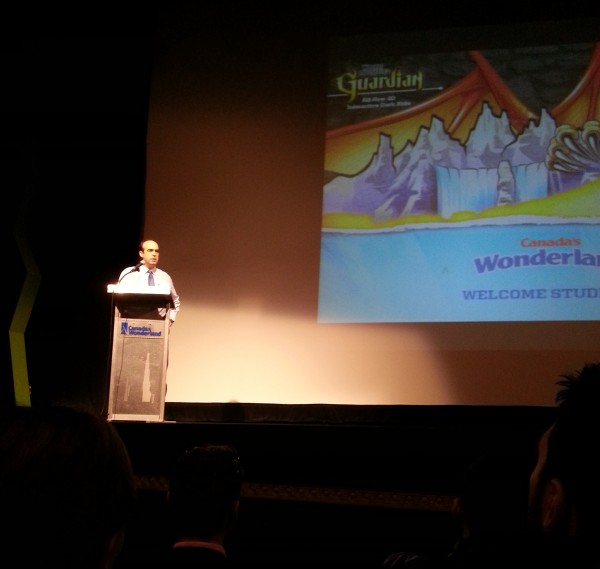 Next, Christine Kerr, Vice President of BaAM Productions and President of the Themed Entertainment Association (TEA) gave a presentation on the amusement industry. 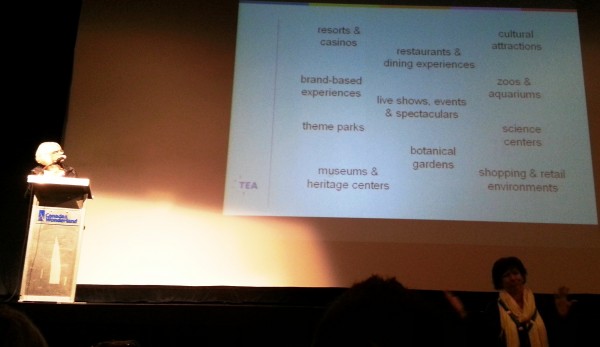 Afterwards, it was time to go ride four of Wonderland’s attractions: the Grand Carousel, Backlot Stunt Coaster, Wonder Mountain’s Guardian, and Leviathan. The carousel was selected after it was unveiled this was the ride that would need to be retrofitted in the second part of the competition. Riding the carousel reminded everyone what the experience was like and gave opportunities to think about how it could be improved upon. 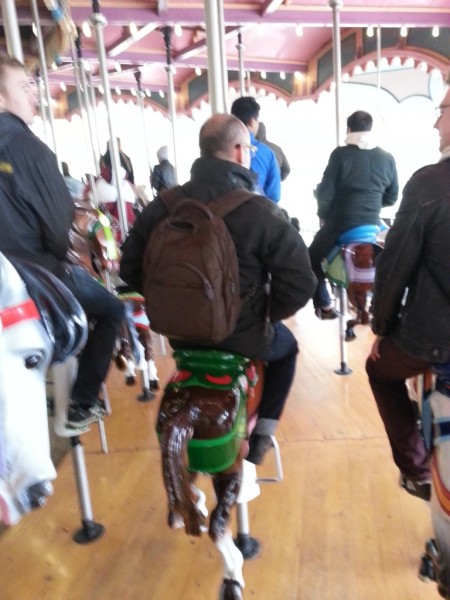 Riding the seventh tallest roller coaster in the world in forty degrees and rain was quite the memorable experience. Leviathan really packs a punch, especially the first four elements.  I just wish the ride were longer! This coaster now has me really excited for Fury 325 opening at Carowinds next year. 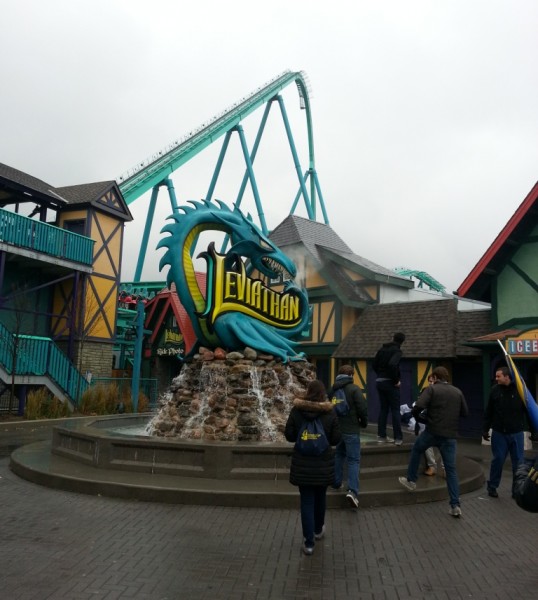 The purpose of riding the coasters was for the students to learn how the rides feel. They had to think about various elements of the experience, such as: what they liked better, the front or the back seat and if there was a preference, why? Did the person they were sitting next to make a difference in the ride experience? What type of elements on the coasters did they enjoy more, high speed curves or airtime hills? 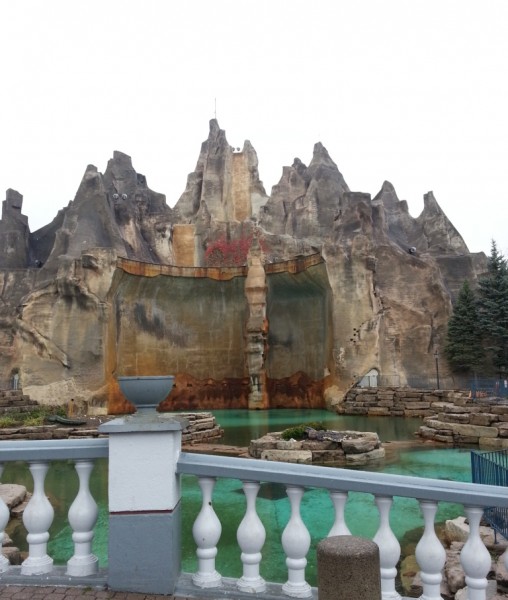 While walking around the park we caught a glimpse of the stand up coaster Skyrider being carefully dismantled as it is relocated to a park in Italy. 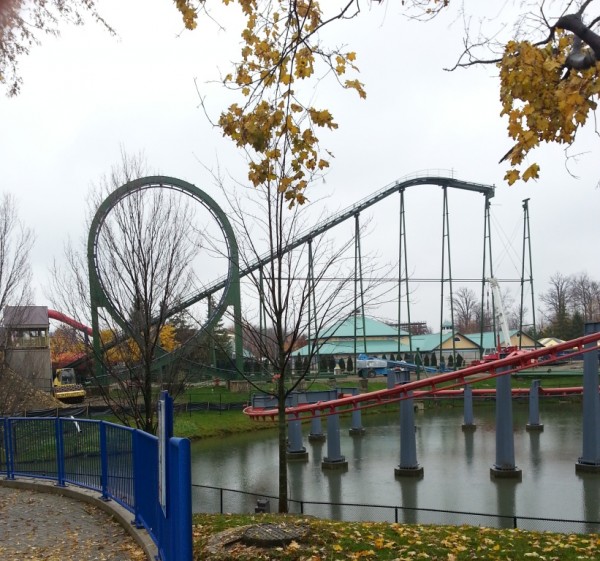 After a delicious (and warm!) lunch, it was time to examine how the rides actually work. The first stop was the carousel.  Students were able to peek inside to see how the ring gears rotate the carousel and how the weight of the entire ride is supported from the central structure. 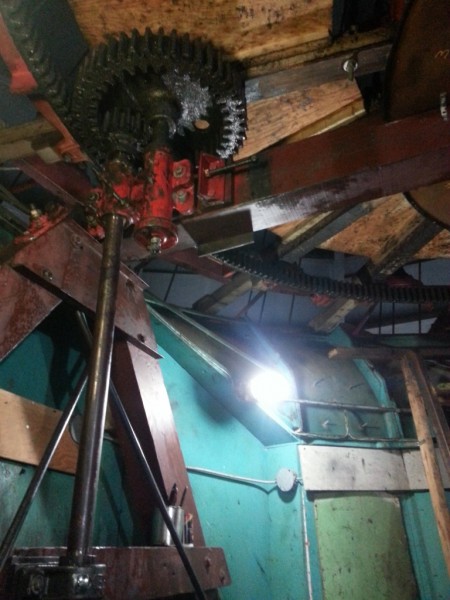 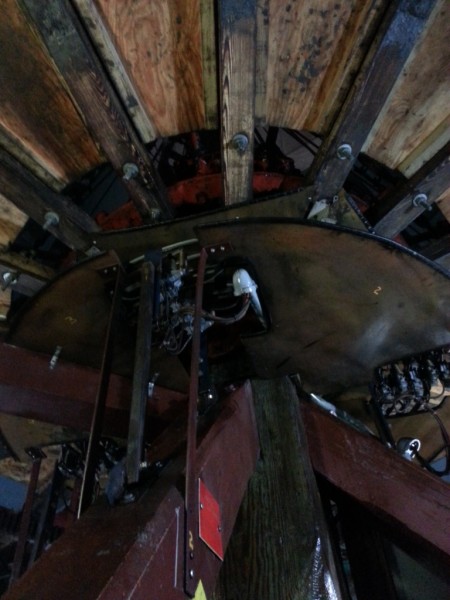 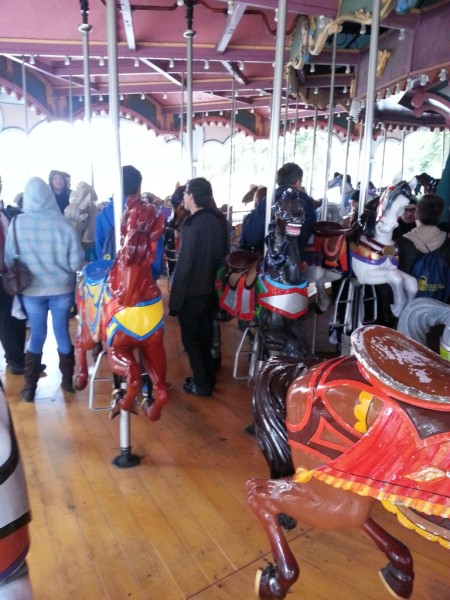 Next, the group broke up into three smaller  groups  to tour the other three attractions. At Leviathan, the participants explored the storage platform where we could look  up close at the underbelly of the B&M trains.

Anti-roll backs, notice the padded part that acts as a silencer: 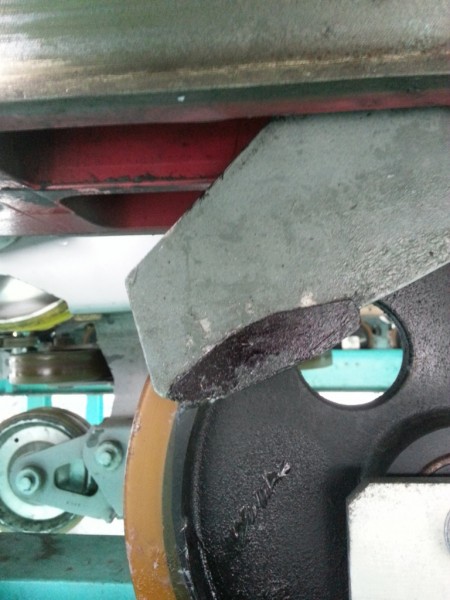 The road, guide, and up-stop wheels: 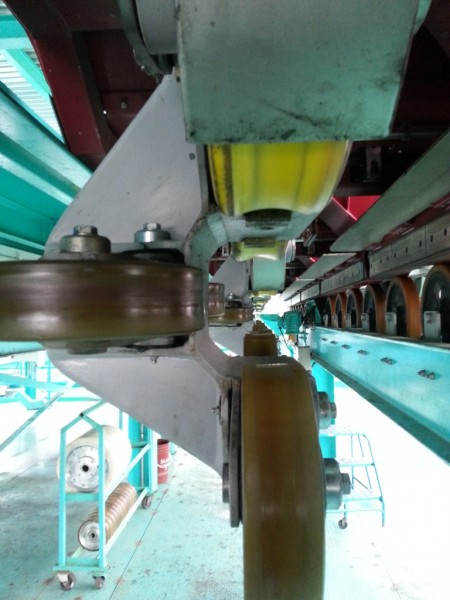 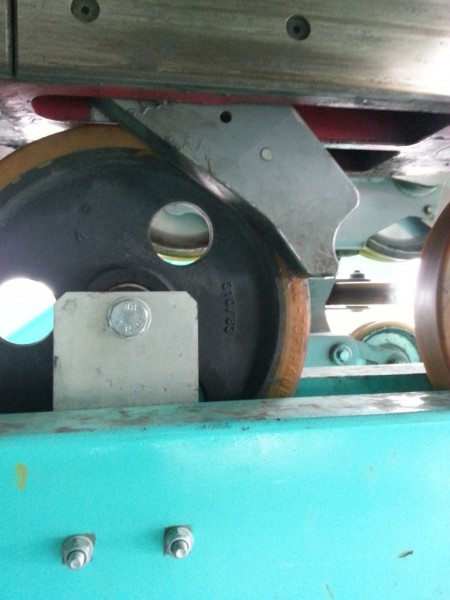 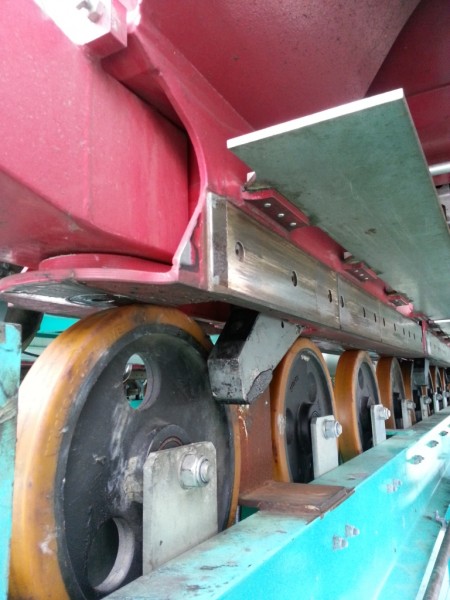 The park uses two types of wheels and can mix and match them to affect the speed of the coaster. Here’s a nylon road wheel: 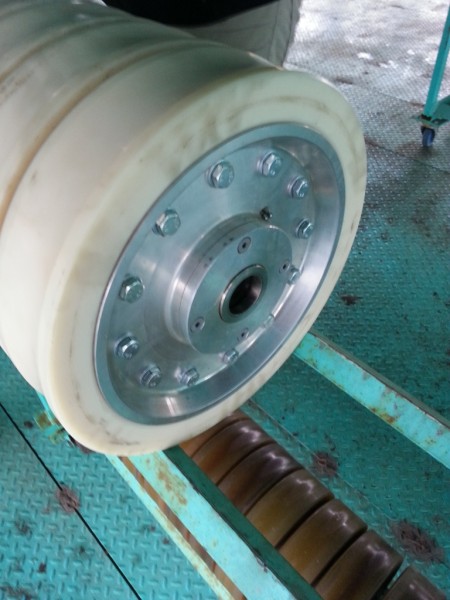 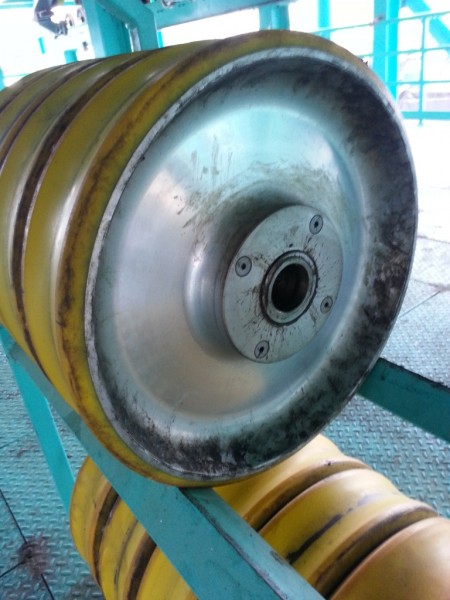 During the Italian..er….Backlot Stunt Coaster tour Mark Stepanian, a project engineer at Premier Rides, was on hand to explain how the linear induction motors (LIMs) propel the twelve passenger trains from 0 to 40mph. He also explained the cost advantages of using  a track design with no spine while the ride is close to the ground versus a  3-tube track consisting of two rails and a spine (it’s cheaper and easy to manufacture large, round columns versus bending more steel tubes). 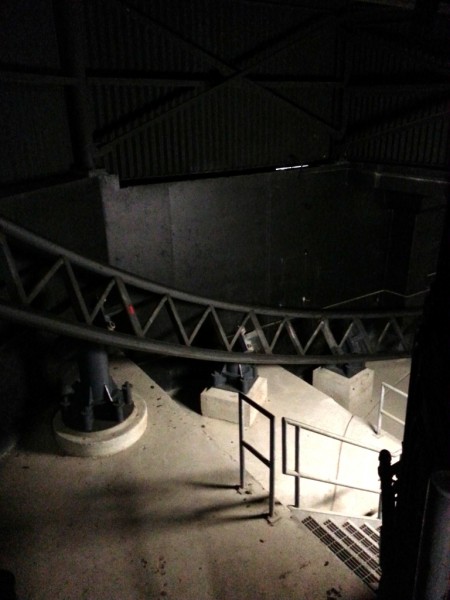 Mark also made students aware of how coasters are designed around  the rider’s heartline in order to provide a safe and smooth ride experience. 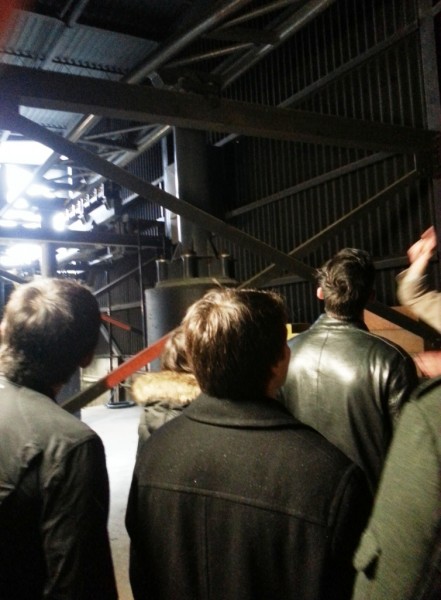 I think the highlight of the day for many of the students (and judges) was Wonder Mountain’s Guardian.  This was later evident in the way some of the interactive elements of Guardian were incorporated into their designs during the competition. I came away impressed with Guardian as well – it’s more fun than your typical shooter attraction and more of a “ride” than Disney’s Toy Story Midway Mania. From a technical standpoint, it’s quite the complicated attraction, especially for a regional theme park. But sorry, no behind the scenes pictures from this one. 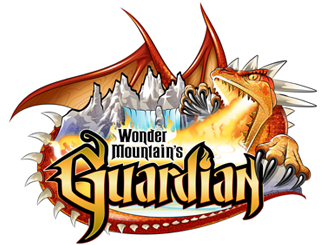 We were fortunate enough to be able to experience Guardian twice: once with the main show and again with the Halloween themed zombie overlay. Guardian is basically three different ride types combined into one: a roller coaster combined with an interactive dark ride combined with…well, you’ll just have to try it for yourself to find out – and I highly recommend that you do! I would love to see other Cedar Fair parks install similar attractions. Perhaps there will be an announcement at IAAPA next week? 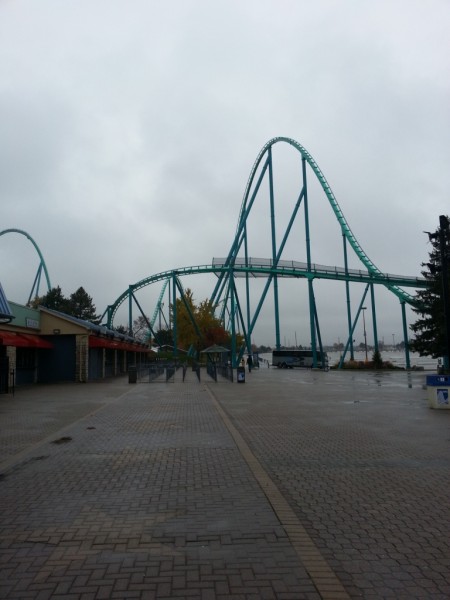 And that concludes our day at the park. Special thanks to Canada’s Wonderland for all that they did and kudos to the park for operating the rides despite the weather.