Guest Blog: A History and Review of Falcon’s Fury

At Busch Gardens in Tampa, Florida, Falcon’s Fury has begun taking fearless riders up the 335 foot tower.  That’s right, Falcon’s Fury is now open.  After months of anticipation, I was able to experience Falcon’s Fury twice on its second day of “soft openings.”  First, I will start with some history of the project, then move on the reviewing the ride.

The story of Falcon’s Fury begins with the fact the Busch Gardens Williamsburg and Busch Gardens Tampa often build their rides in pairs (in which the attractions are similar).  Some examples include Montu and Alpengeist, Sheikra and Griffon, and Kumba and Drachen Fire.  In September 2010, Busch Gardens Williamsburg announced a two-year expansion plan for their Oktoberfest area, as well as a new slide for their water park, Water Country USA.  This included a new drop dower for 2011, Mäch Tower, and a new coaster for 2012, later announced to be Verbolten.

Just one month later Busch Gardens Tampa announced Cheetah Hunt as their “new for 2011” ride. Many assumed that Busch Gardens Tampa would also get a drop tower, likely a clone of Mäch Tower.  However, during the construction of Mäch Tower, there were many delays.  Being Moser’s first full-size drop tower, the company had to work out many bugs with the system.  The ride missed its scheduled opening date of March 2011 by a long shot, it didn’t open until August 18, 2011..

Fast forward two years to the summer of 2013, when Busch Gardens Tampa announced the closure of the Sandstorm flat ride.  Plans and blueprints had already been discovered, and the names Desert Dive and Falcon’s Fury had been trademarked, but no one knew the manufacturer.  Two weeks later, Busch Gardens announced Falcon’s Fury as North America’s tallest free standing drop tower at 335 ft, with Intamin as the manufacturer. 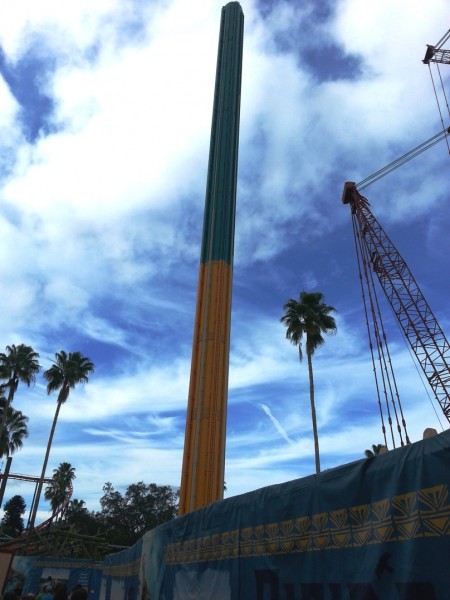 The twist was that the seats would rotate at the top of the tower, before the 60 mph plunge back to earth.  On February 28, 2014, the park confirmed the Falcon’s Fury would open May 1st, as well as the renovated Timbuktu land it would be placed in, named Pantopia.  As the opening day passed and the media events were cancelled, people wondered why the ride had stopped testing, and what was wrong.  The park released a statement, of which a portion said: “Due to a delay in the fabrication of key component parts, neither the manufacturer nor Busch Gardens are able to complete the lengthy testing processes needed to open the ride to the public.”  They also scheduled a “late summer” grand opening.

A large portion of summer passed without much activity on the tower, except for it being painted with red flames on the bottom sections.  However, Pantopia was open, offering new dining options, a new show, and a very vibrant, colorful atmosphere.

In early August testing resumed, and shortly after the park executives and employees began to be able to ride.  On August 16, the ride soft opened to the public. 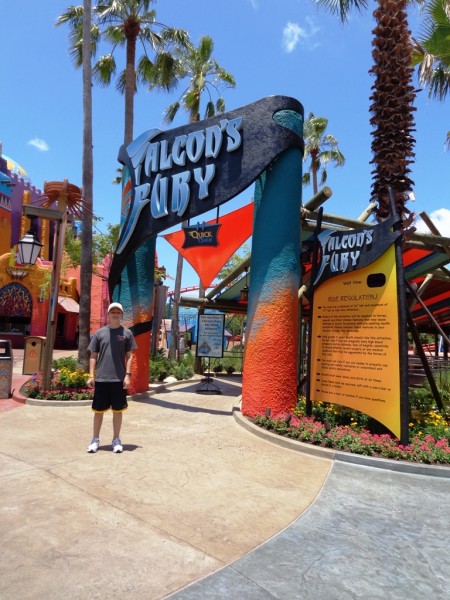 When you approach Falcon’s Fury, it is very imposing and quickly gives you seconds thoughts about riding.  After you enter the queue, you are completely shaded by canvas coverings.  There are also a number of fans in the queue to keep guests cool, which was definitely appreciated in the hot Florida weather.  The canvas covering blocks all views of the tower from the queue, which can be intimidating to those who like to watch the ride multiple times before they ride.

The team members (TMs) then send you through a circle to the right or the left, and then all the way to the furthest available seat.  From there you get to watch one cycle of the ride, and then you are loaded in.  The TMs come around and secure you into your seats, then make you put your hands up in the air to ensure you don’t have a camera or anything else.  Although it is a little tight when the restraints are pushed in, it quickly becomes comfortable once you start climbing the tower. 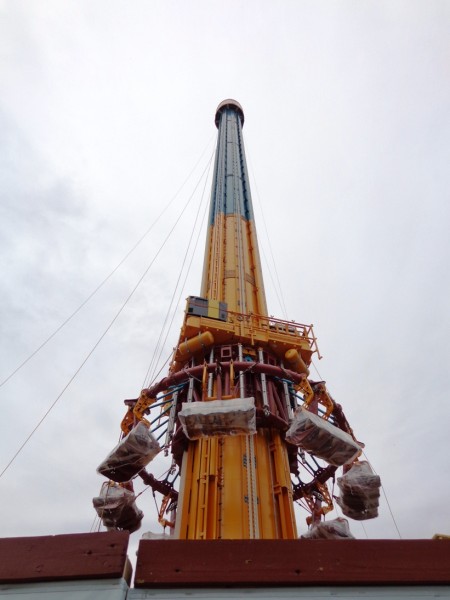 Personally, I think Falcon’s Fury’s seats are more comfortable than any other Over-the-Shoulder restraints I have been in.  Although there is nothing that secures your ankles or legs, you never really feel insecure.  The seats are pulled into the tower a little bit, and then you start to climb very, very slowly.  This doesn’t last long, and soon you are rising at an increasing speed.

Even though the ride doesn’t rotate like other drop towers, it gives another reason to go and re-ride to try for that desired view.  When you are slowing down near the top of the tower, the seats begin to tilt back into the 90 degree position.  You are kept facing the ground for 1-5 seconds.  To me this is the most thrilling part of the entire ride, even if my 1 and 2 second hang times did feel a bit short.

The view is incredible, especially if it is a clear day.  There is also a Falcon symbol on top of one of the buildings that you can only see from Falcon’s Fury, if you sit on the side facing the entrance to Pantopia.  When the ride drops, it has a very unique feeling to it.  It is extremely hard to describe, but is best explained by Jeff Hornick, Director of Design and Engineering at Busch Gardens: “This is the closest experience to skydiving without jumping out of an airplane”.  Nearly four seconds after the freefall begins, the seats seem to fly back into the upright position before the ride brakes about 30-40 ft. above the ground.  I felt no pain or intense forces due to the braking, but it was done fast and efficiently.  The ride carriage then is slowly lowered to the ground.

As I was rushing out of my first ride on day 2 of the public soft opening, I met Mark Rose, VP of Design and Engineering at Busch Gardens asking riders for their opinions on Falcon’s Fury.  Upon asking him about plans for a new family coaster/renovation of Egypt and the demolition of Gwazi, he responded saying that they had plans for both of them.  After a quick stop for a pretzel, I rushed back to get in line again.  It was one incredible ride, and it definitely solidifies Busch Gardens as Florida’s thrill ride capital. 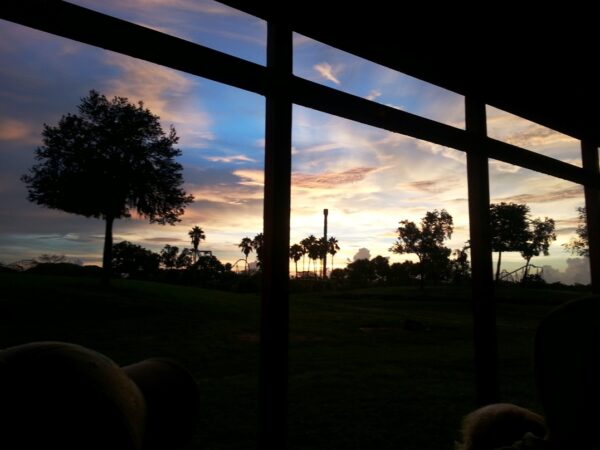 Compared to other drop rides, Falcon’s Fury stands out in its uniqueness.  Although the drop and “intensity” of the ride are advertised, I personally found Acrophobia at Six Flags over Georgia to be a more intense experience.  On Acrophobia, the brakes seem much closer to the ground and you are tilted 15 degrees the entire way, which allows you to see the ground until the last second.

However, I greatly prefer the overall experience of Falcon’s Fury to that of Acrophobia.  Falcon’s Fury has become my second favorite ride at Busch Gardens, with Montu still hanging (no pun intended) on to first.  While short, the ride delivers on its promise of a face-down fall from a 335 ft. tall tower.

POverall, Falcon’s Fury was worth waiting the entire summer for.  It is easily the world’s best freefall tower in my book, and is definitely worthy of being on every coaster enthusiast’s bucket list.  Congratulations to Busch Gardens on another huge success.

Special thanks to guest blogger Jonathan Edewaard for writing this feature.