Six Flags Magic Mountain’s Ninja coaster derailed Monday evening after striking a fallen tree branch, according to a statement by the park. Four riders received minor injuries, and up to 30 riders in total were stranded following the derailment.

The park tweeted the following statement regarding the incident:

Tonight a branch fell on the Ninja coaster track obstructing the train. Riders are all down and safe. Ride closed until cleared.

An extended statement from the park reads: “Earlier this evening, a tree branch fell on the track of the roller coaster, Ninja, obstructing the train. Park medical staff and local paramedics were immediately called to the scene. Of the 22 guests safely evacuated, two were transported to a local hospital for precautionary measures.” While there were no serious injuries, the images of the coaster after the derailment were shocking:

The Arrow Dynamics suspended coaster opened in May of 1988. It reaches a top speed of 55 mph along its 2,700-foot-long course. Each of its three trains seat 28 riders

Here’s what we know so far:

According to fire officials, four Ninja riders received minor injuries on a Six Flags Magic Mountain ride and up to 30 more riders were stranded. 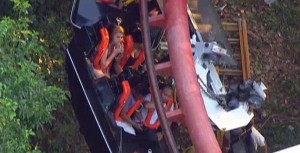 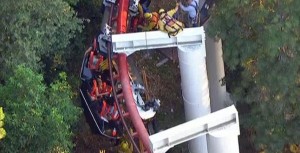 At least one car appears to have become detached from the track. 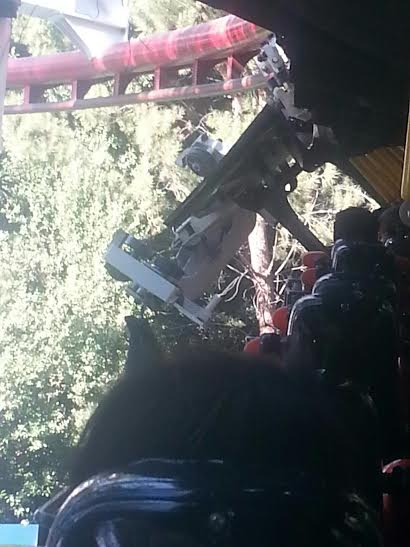 There’s a reason Ninja is known as “The Black Belt of Roller Coasters.” This stealth assassin is a suspended swinging roller coaster. There are only four of this kind in the entire U.S. and you’re about to ride one of them. You’re hanging from the track, which on this insane ride is above your head. Shoulder harnesses secure you in place but don’t expect to just sit in one place—you’re going to be swinging all over, a full 90 degrees each way.

The whole ride sits high on Samurai Hill, overlooking all of Six Flags Magic Mountain, but there’s not much time to enjoy the view. As you shoot down the snake-like steel track you’ll grip the hillsides and blast through the trees swiftly, slicing through the landscape. Ninja pivots with precision as you narrowly miss tagging land and water, whipping around at 55 miles per hour.

Your whole body will swing out to the sides as you take winding snake-like turns at nearly 4G. In fact, once this warrior begins its run there’s hardly any straight track at all. But remember your training ninjas, as you cut through the air like a sword, slinging from side to side in a seamless, smooth lightning-fast flow.

Stay tuned as we continue to update this page as we learn more.