As a native Tennessean, my heart has never quite healed since losing Opryland USA after only one visit as a five-year-old. And I’m sure many Nashville residents would feel the same.

Proposals have come and gone over the years for an amusement park-like component for the Gaylord Opryland Resort, yet nothing has solidified. Even Dolly Parton released plans for a snow and water park for a nearby site, but they never materialized.

But now it appears that new plans have surfaced for an entertainment area, possibly called “CityWay” that will connect the Gaylord Opryland convention center with Opry Mills.

At first glance, it reminds me of a Tennessee, country music-version of Universal’s CityWalk entertainment districts.

I’ve seen this image of the site plan floating around the internet, and it seems that Screamscape has now gotten wind of it as well. 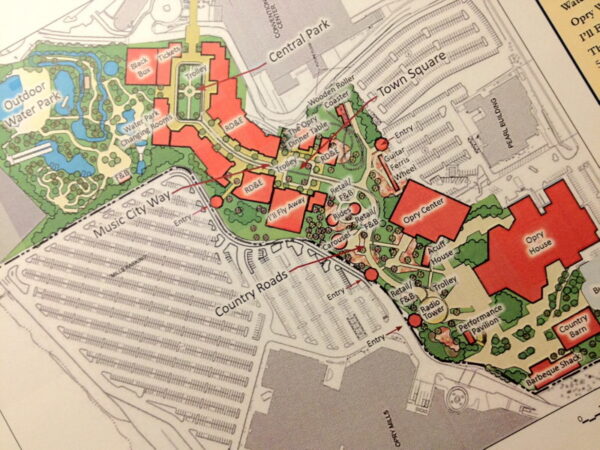 The plans call for an outdoor water park, a variety of theaters, a trolley, retail and dining, as well as a handful of amusement park rides. The rides include a wooden roller coaster, carousel among others.

I haven’t been able to track down any information regarding these plans other than the graphic posted above. There’s no telling how recent or old they are, but it will certainly be interesting to see what becomes of this idea.

While nothing will ever replace Opryland USA, I think Nashville certainly deserves some type of roller coaster and theme park-like attraction.

What are your thoughts on this possible proposal? Discuss in the comments section below.