Murky skies, fat rain drops and a wheel malfunction didn’t dampen the mood at Six Flags Great America as the coaster enthusiast and media masses gathered for a preview of Goliath, the park’s triple world-record-breaking wooden roller coaster. After months of anticipation, I was finally able to ride Rocky Mountain Construction’s second “made from scratch” coaster. I was ready to see what Outlaw Run’s younger (but larger) sibling had to offer. 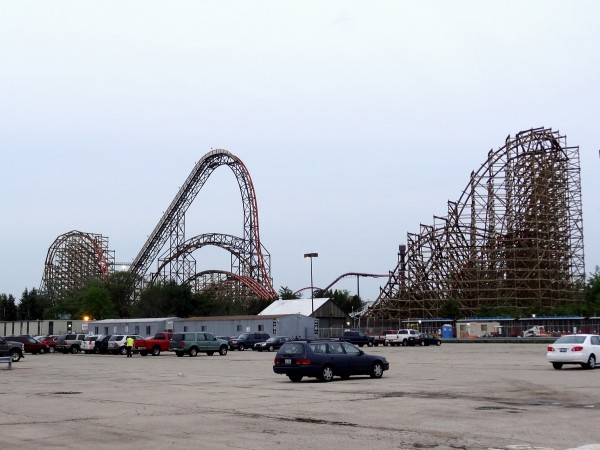 Few things would make me jump out of bed at 4:55 a.m., but riding a roller coaster is definitely one of them. 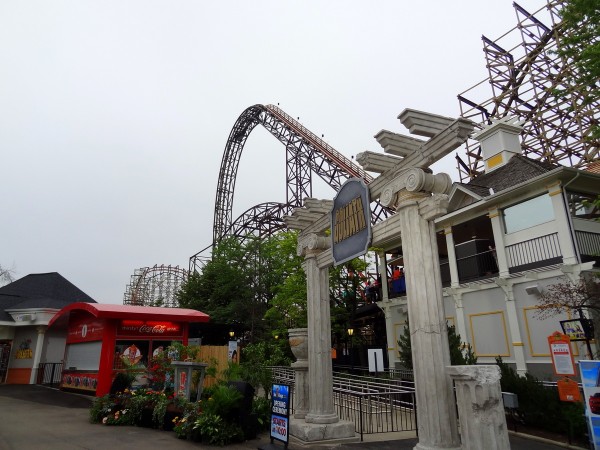 First things first, I’ll share my thoughts about the coaster itself. 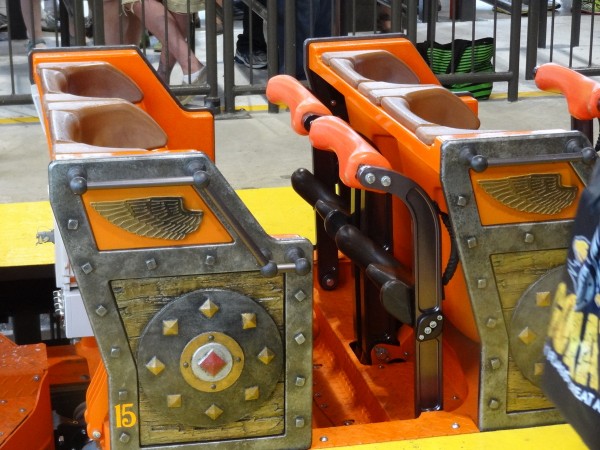 Goliath’s trains are very comfortable. You’ll be very thankful for the seat belt, lap bar and shin bar when you’re hanging upside down on the zero-g stall. 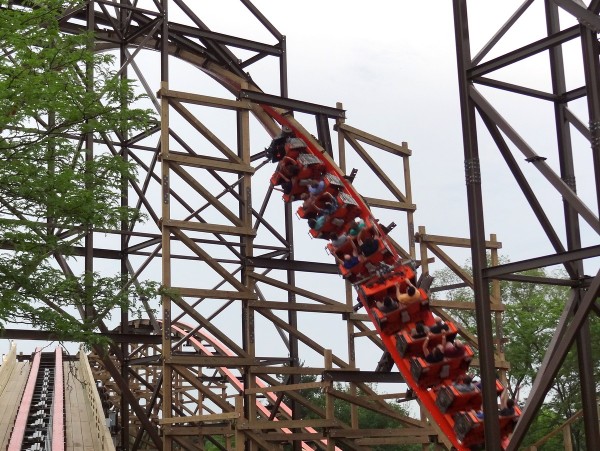 Goliath is a coaster that you must ride more than once. It’s amazing. It’s fun. It is fast, smooth and short.

While a short ride, Goliath is unrelenting from the moment it leaves the lift chain until it reaches the brake run. 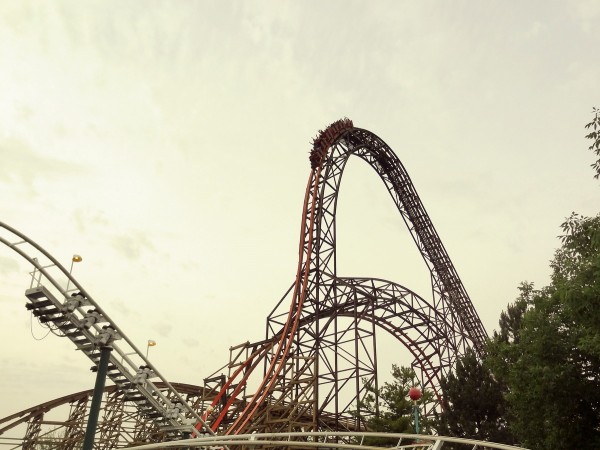 Only one train was running for the media event, but I heard that both trains should be in operation by tomorrow’s grand opening.

The first drop is over before you realize it, but it still provides ample amounts of air, especially in the middle and back cars. 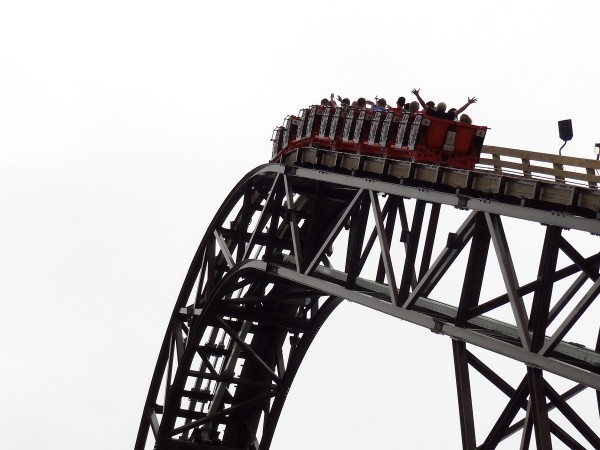 The 165-foot-tall lift hill provides a beautiful view of the park, one that has never really been seen at this height (sorry, Iron Wolf). 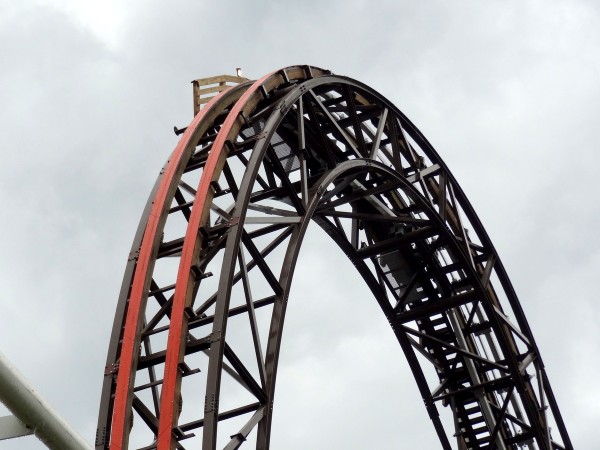 The first drop is terrifyingly steep. And the underground tunnel only makes the plunge even more exciting.

Tip: ride in the back for a drop you won’t soon forget. 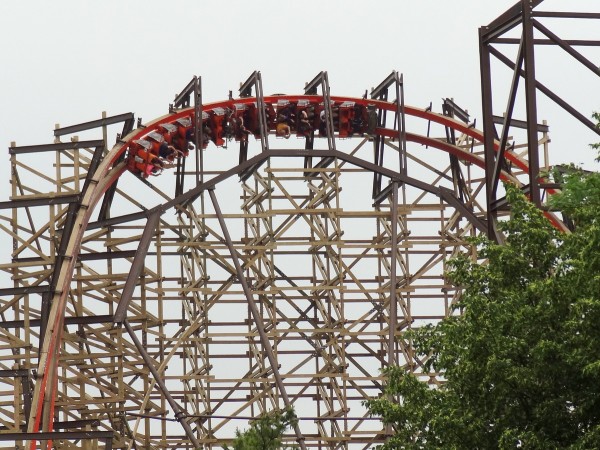 The overbank turn may not invert as much as some of the other elements on the coaster, but you’ll swear you’re upside down when maneuvering the turn.

The negative-g floater hill following the overbanked turn provides violent-but-amazing airtime. Say goodbye to any loose articles that you should have left in the station or with a non-rider. 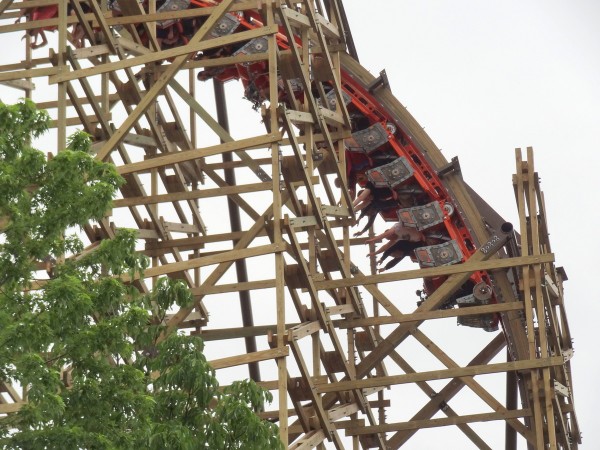 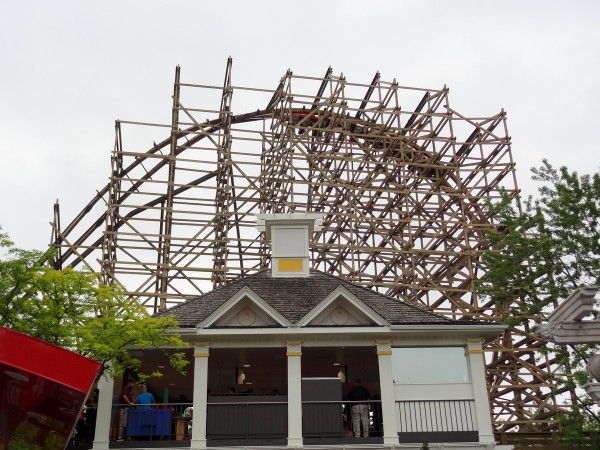 It’s hard to believe that the train clears the beautiful yet intricate structure supporting the inverted drop. 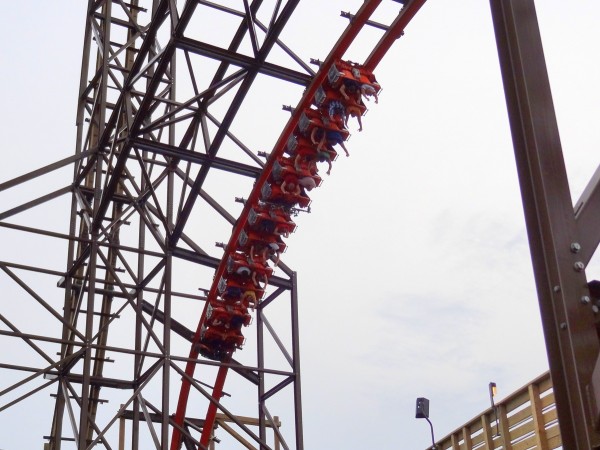 The zero-g stall is an element that must be experienced to fully understand. Never before have I hung upside down on a roller coaster, at least for not the length that I did on Goliath.

The twist-and-shout element, while difficult to photograph, was a surprisingly fun element. Goliath may not be the longest coaster at Six Flags Great America, but it certainly makes every foot of track count. Nothing is wasted. 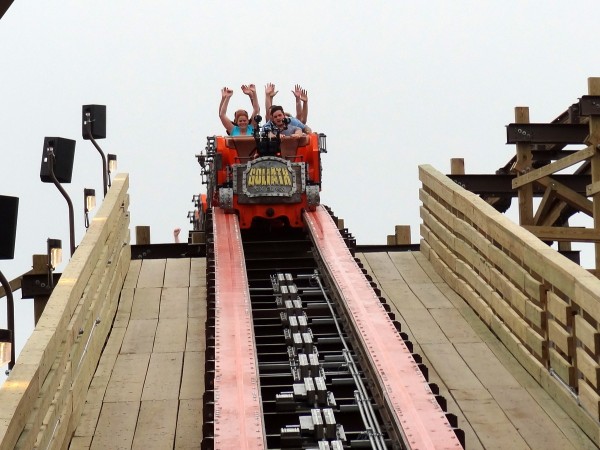 Again, Goliath doesn’t slow much during its compact course. Even the last hill which leads to the brake run provides a nice pop of air. 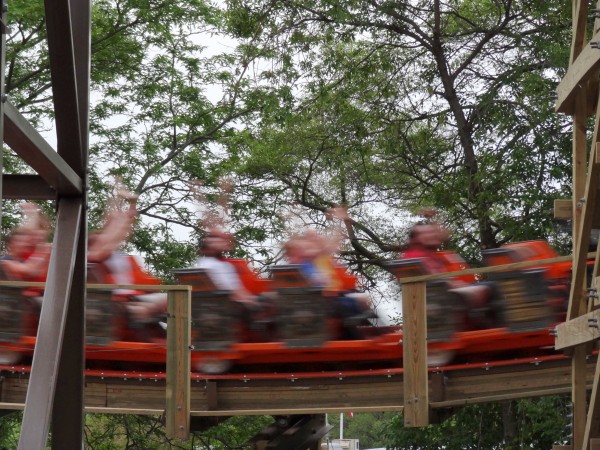 The coaster is a speed demon that gives you very little time to catch your breath (because you’ll probably be screaming for most of the ride).

The only moments of “relief” come when you’re hanging upside down. I think that speaks volumes about the sheer insanity of this beast of a roller coaster. 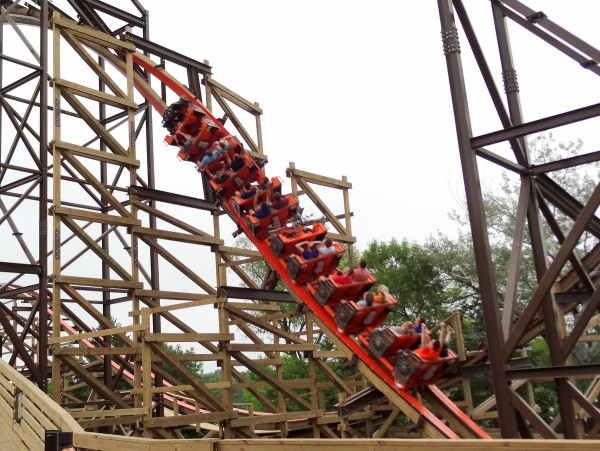 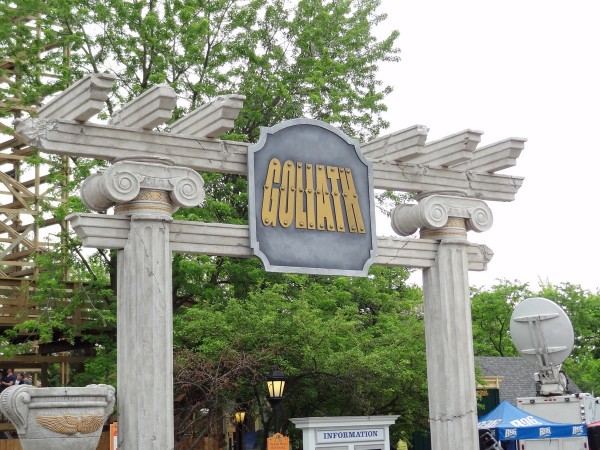 The Goliath entrance is definitely one of my favorites at Six Flags Great America. 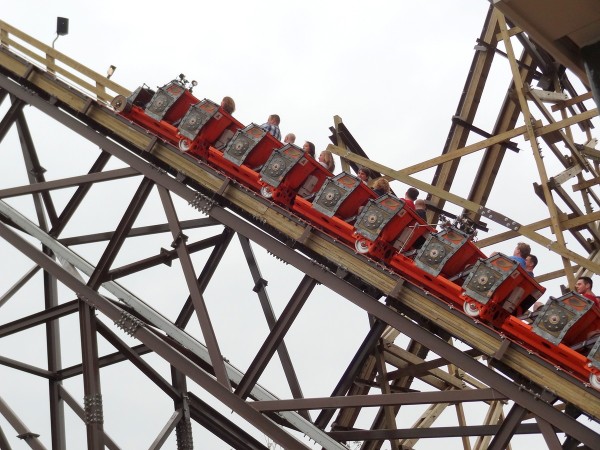 Since only one train was operating for the event, two rows were fitted with camera setups: the first and fourth cars. 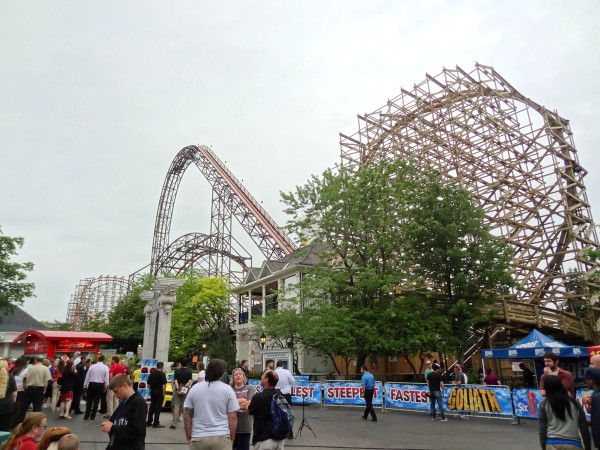 Various members of the media began to assemble in front of the coaster’s entrance. The looming storm forced the ceremony to begin a few minutes early. 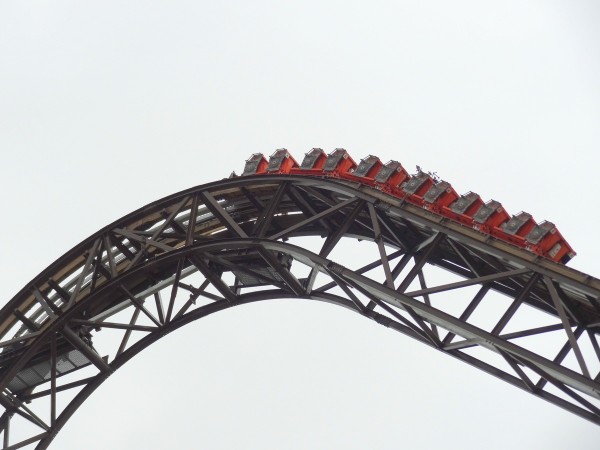 Not long after my second ride on Goliath, I heard a strange clicking noise coming from the train completing the course. I likened the sound to old “baseball card in the bicycle wheel” trick.

According to riders, some of the polyurethane coating on one of the coaster’s wheels “shredded.” Luckily, no riders were injured and the wheel was replaced. The coaster was back in operation within 30 minutes.

Park officials remained calm and reassured everyone that Goliath was safe to ride.

“Goliath did have a wheel issue,” Six Flags Great America park president Hank Salemi stated as the opening ceremony began. “It happens a lot on roller coasters. All of that’s been prepared and has gotten repaired and we’re ready to go…” 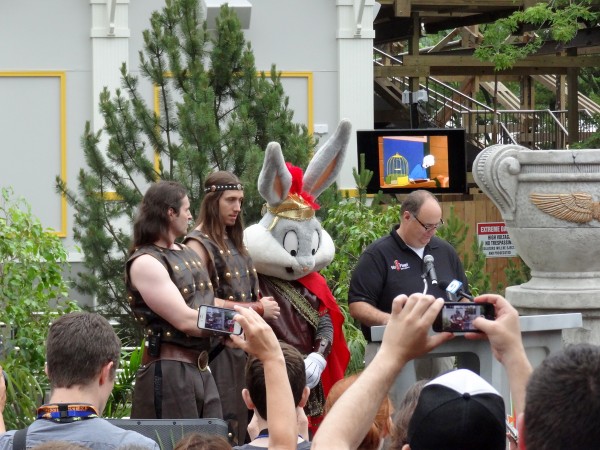 Gladiator-like actors approached the Goliath entrance in formation with torches in hand. A train of riders dispatched, and the crowd cheered. 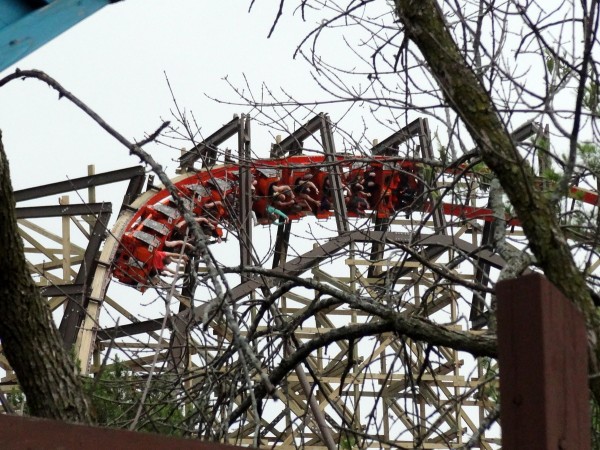 I can’t wait for the park’s train to reopen so that hopefully we can get even better shots of the coaster’s overbanked turn. 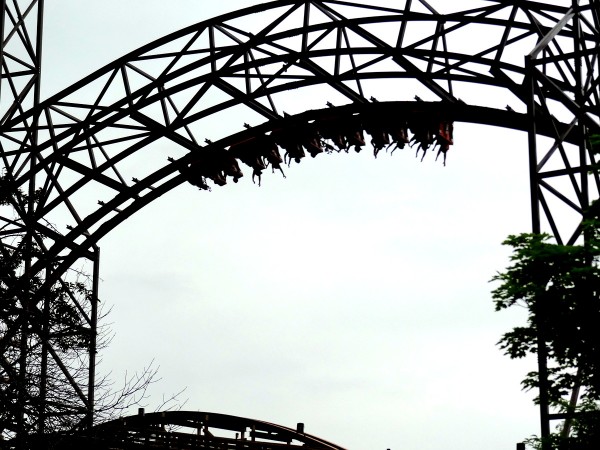 If Goliath’s support structure had stayed true to the original renderings, photos like this would not be possible. 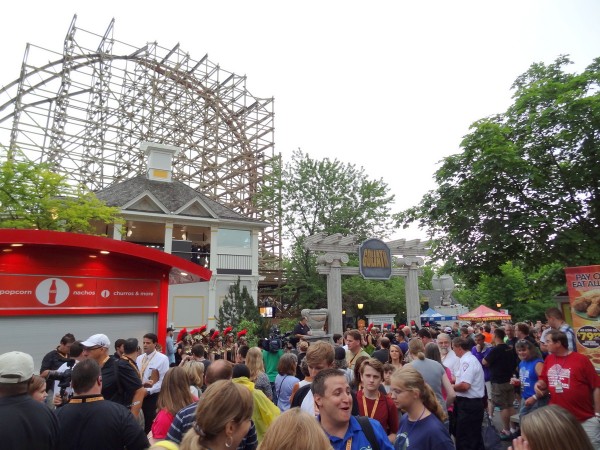 Unfortunately, a thunderstorm shortened the ceremony. 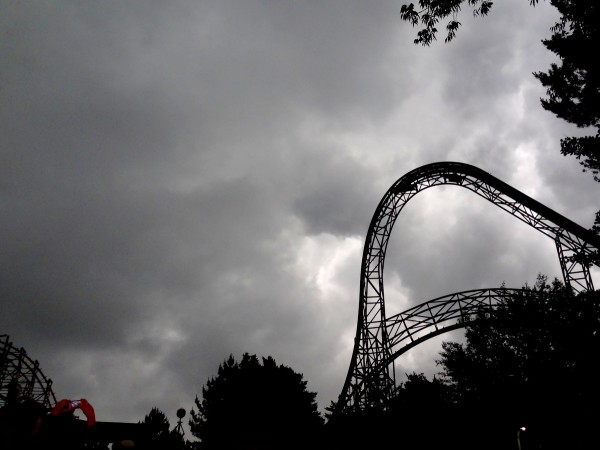 Attendees were promptly ushered into the Mooseburger Lodge for shelter and refreshments.

Luckily, a lull in the storm allowed the coaster to reopen within an hour. 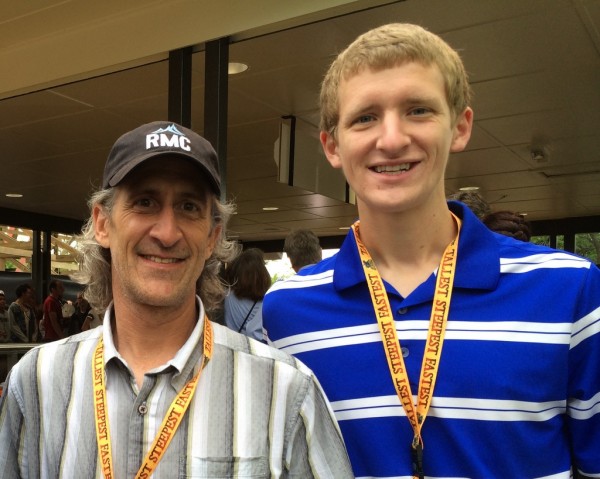 I had the chance to meet the roller coaster engineer and design legend Alan Schilke, who of course designed Goliath. You can also thank him for other Rocky Mountain Construction coasters such as Outlaw Run, New Texas Giant, Iron Rattler and Medusa Steel Coaster.

I cannot commend Six Flags Great America’s staff enough. Many of them closed down the park last night, and were back at 2:30 this morning to prepare for the event. But you never would have known it by their positive attitudes and energy. This park is truly a gem in the Six Flags family. 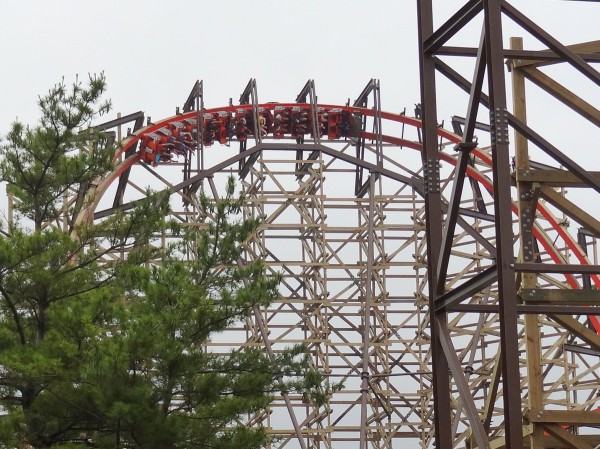 So is Goliath the best coaster at Six Flags Great America? That’s not for me to answer — it’s really an individual preference. Is it Rocky Mountain Construction’s best coaster? After two rides, I would give a slight edge to Outlaw Run. But anything that comes close to Outlaw Run is a winner in my books.

In the video below, watch me ride Goliath and see some additional off-ride footage of the coaster in action:

Update: Goliath is now open to the public.

See even more photos from Goliath’s media day on our Facebook page.

Have you ridden Goliath yet? Share your thoughts about the coaster in the comments section below.