Hansa Park in Germany has announced that it will open Kärnan, a hypercoaster, in 2015. It will be the park’s most expensive and tallest attraction to date. 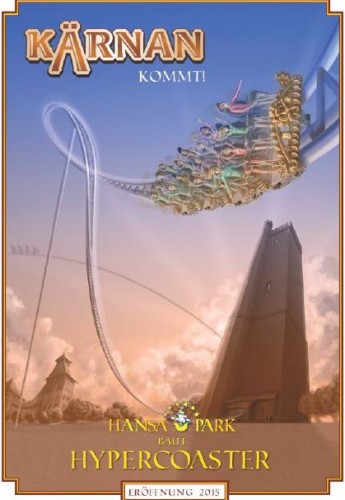 Not much is known about the specifics of the coaster, but internet speculation points to it being a Gerstlauer coaster.

Gerstlauer is responsible for the park’s last two coasters: Fluch von Novgorod (2009) and Die Schlange von Midgard (2011). This would be the company’s first coaster to surpass the 200-foot mark, if it is indeed a “hypercoaster.”

The press release is German, but the translation states:

“For the first time in the history of the Hansa Park, visitors and fans were involved during extensive and intensive planning phase, the opportunity to concretely and directly to influence the largest ever investment in the future of the park. And so they have decided: the park is building a hypercoaster!

The groundbreaking ceremony is planned for later this year. The construction period will be one and a half years. Until the opening in 2015, there will be a time of speculation. Even the guests and fans have mostly wanted: ‘We want as long as possible to puzzle over the details.’

From that, I think we can expect some sort of viral marketing campaign as the park releases details about the coaster.

Do you think Gerstlauer is capable of making the jump to hypercoaster territory? Share your thoughts in the comments section below.