Part two of our “Looking Ahead to 2014” series will look at the Sandusky, Ohio-based Cedar Fair Entertainment Company and the twelve theme parks that they manage – eleven of which are owned and operated by Cedar Fair themselves. 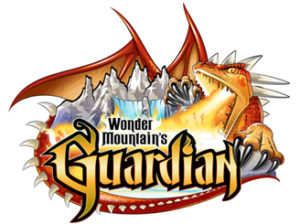 Canada’s Wonderland is placing an interactive 4-D Dark Ride inside the park’s iconic “Wonder Mountain” next spring. Wonder Mountain’s Guardian will be the park’s second interactive dark ride (Boo Blasters on Boo Hill), and will feature a “combination of unique ride thrills and immersive 4-D interactive action.” Armed with a laser-firing gun, riders will travel through five “layers” of Wonder Mountain, with the ride culminating in the dragon’s lair for it’s finale. TRIOTECH, based in Montreal, Quebec, Canada, developed the technology for Wonder Mountain’s Guardian, and their CEO, Ernest Yale, was quoted as saying: “This new ride at Canada’s Wonderland will be a one of a kind, never seen before attraction. It will bring the best elements of the physical, virtual and multi-sensory world. All this combined in a fully immersive and interactive experience.”

As discussed several weeks ago here on Coaster101, Carowinds is adding two new water slides, Surfer’s Swell and Dorsal Fin Drop to their Boomerang Bay water park. Surfer’s Swell will propel riders through an angled wall that simulates the sensation of a surfer catching a wave, while Dorsal Fin Drop is a Bowl slide that will send riders though a tube and around a bowl several times before exiting the ride. These slides are the first phase of a $50 Million expansion for Carowinds.

Cedar Point, the flagship park of the Cedar Fair chain, will gain two more rides during the 2013 offseason in the park’s Gemini Midway area. Pipe Scream, a Zamperla Disk’O coaster, will tower 43 feet above the ground as riders travel along the 302 foot track at speeds over 40 miles per hour. Cedar Point is also adding Lake Erie Eagles, a “flying scooter” manufactured by Larson International. Cedar Point is also moving the park’s Frog Hopper ride (to be renamed Woodstock’s Airmail), and entrance for Jr. Gemini (to be renamed Wilderness Run) to the park’s “Camp Snoopy” area. 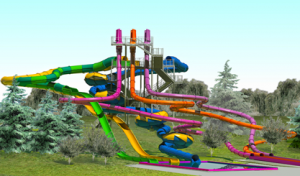 Dorney Park is building a massive new slide structure for the 2014 season. Snake Pit will bring six new slides to Wildwater Kingdom, which is located inside of Dorney Park. The slides are divided into three categories. Python Plummet features three “trap-door” style slides that are 450 feet long. Boa Blasters are two large slides where riders traverse the slide in single or double tubes, and Constrictor features four tight 360º turns that leads to one of the “highest banking tube slide experiences” at Wildwater Kingdom.

Gilroy Gardens, a small park located in central California, is the only park that Cedar Fair manages, but does not own. They are introducing a “Water Play Oasis” for 2014. Details on the new project are limited, but in the images that the park tweeted, it appears that there will be a small pool with a few slides, in addition to some cabanas and shaded areas.

Kings Dominion opened its gates to the public for the first time in 1974, and in 2014, they are celebrating their 40th anniversary. The Doswell, VA, theme park is bringing back several classic icons as part of the celebration, including the park’s famed Blue Ice Cream. Also returning will be the classic Candy Apple Midway and Safari Village, which will include improvements to both Volcano: The Blast Coaster and the park’s classic Arrow Looping Coaster, Anaconda. The park’s International Street fountain will also undergo a full restoration.

Kings Island, Cedar Fair’s second park in Ohio (accquired with five other parks in the 2006 Paramount Parks accquisition), is unleashing a major new ride that has seen a lot of coverage here on Coaster101 — Banshee. The Bolliger and Mabillard-designed inverted coaster will take riders though over 4,100 feet of track at speeds approaching 70 miles per hour. King’s Island’s 15th Coaster, Banshee features seven inversions – a dive loop, two vertical loops, a zero gravity roll, two batwing inversions, and an 170-foot long heartline finale. It will be the park’s largest investment in it’s 41-year history, costing $24,000,000.

Valleyfair, Cedar Fair’s lone property in Minnesota, is opening a new Family Area, Route 76. The area is named for 1976, which was the year that Valleyfair opened. Valleyfair is building Northern Lights, a family-oriented Zamperla Disk’O coaster, in this area. Antique Autos will return with a new track layout, andValleyfair will also relocate their Tilt-a-Whirl and Scrambler rides into this section of the park, complete with new theming and LED packages.

Worlds of Fun in Kansas City, MO, will be receiving a transplanted ride from Knott’s Berry Farm. The former Windseeker will be traveling 1,354 miles east, and will be renamed Steelhawk. The 301′ tall attraction is a staple at other Cedar Fair parks around the country, and features awe-inspiring 360º views. Windseeker barely lasted a year at Knott’s Berry Farm before two incidents caused the California OHSA to shutter the ride indefinitely. For those who have never been on a Windseeker ride before, it truly is a breathtaking experience, and I sincerely hope that the ride reclaims it’s former glory at Worlds of Fun.

According to Screamscape, Knott’s Berry Farm may be planning for a Giga Coaster in 2015 or 2016, and there is still a possible refurbishment on the books for their Calico Mine Ride.  . Another source has hinted at a rumored ride refurbishment for Michigan’s Adventure next year as well. And as for California’s Great America, Screamscape simply says, “Nothing is known at this point in time…”

What do you think of the new attractions that Cedar Fair will open in 2014?