We recently had the opportunity to talk to Tim Cole, a roller coaster enthusiast who is currently building a model of the infamous Airplane Coaster that thrilled riders at Rye Playland from 1928 to 1957. We discuss the coaster’s history, model building, and the challenges of re-creating a long lost classic. 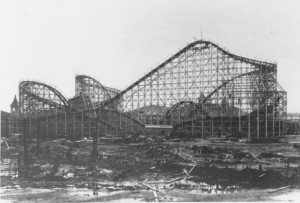 C101: Could you please briefly introduce yourself: who are you and what do you do?

Tim: My name’s Tim Cole. I’ll be 52 sooner than I’d like and I’ve been a member of ACE since 1982. The first ride I ever took on a wooden coaster was on The Giant Dipper (named Roller Coaster when I was at Belmont Park) on May 10th, 1975. The park and coaster closed in 1976. Little did anyone know that in 1981 I would be one of the spearheads to form the Save the Coaster Committee to help preserve the 1925 Prior and Church classic until it could be fully restored and operable, which actually happened in 1990. I graduated from San Diego State in 1988 with a B.A. in Dramatic Arts with emphasis in film. Today, I’m a Administrative Assistant at The Old Globe, one of the country’s leading regional theatre complexes. I finally settled down about a year ago and finally took on a partner, lucky Dennis Dyson. We have two lovable dogs, Pepper, and the three-legged Joey. I live in a central San Diego neighborhood called North Park which Forbes Magazine ranked as the #13th ‘hippest’ neighborhood in the country!

My hobbies depend on which side of my brain happens to be dominate at the time. They range from anally maintaining my personal budget to gardening. I also like to draw and had a 18-month weekly comic-strip called Skin and Bones (a.k.a. Boneskin) which can be seen on Facebook.

C101: Out of all the coasters to choose from, why did you decide to do a model of  the Rye Airplane?

Tim: When people ask me why I chose this particular one, I tell them, “This is one of the top five legendary roller coasters that no longer exists and there is a grassroots effort to have it rebuilt.”

The longer version is, the first person I met in ACE was Richard Munch who was president of the group at the time. Earlier this year, he asked if I wouldn’t mind donating a model I built 11 years ago of the Crystal Beach Cyclone (1927 – 1946). When I built the model, my intentions were to have it on display at some future coaster museum so I was quick to honor his request. At the same time, he kiddingly asked, “By the way, if you have some free time, can you build an Aeroplane coaster model? How about the Cyclone Racer? Mr. Twister? The Bobs? Tornado?”

It would have been a toss-up between Aeroplane and Long Beach’s Cyclone Racer (1930-1968), except a really impressive large-scale sectional model was already built by fan Larry Osterhoudt. I didn’t know a lot about the Riverview Bobs and I know that coaster had tons of experts, and I think a already saw a model of it once.

Finally, a big plus for selecting the Aeroplane was that it was designed by Fred Church who also designed our Giant Dipper, so I was hands-on familiar with his design and structural techniques. Quickly, I quit the comic biz and got right in to researching. Who knows, Mr. Twister may be next!

C101: For those not familiar with it, could you give us a brief history of the Airplane coaster? Where was it built at and when did it operate?

Tim: The Airplane (a.k.a. Aero Dips and Aeroplane) roller coaster is a lost classic. This masterpiece of thrills and aesthetics was designed by Fred Church. The all-wooden thrill ride opened along with the New York’s Rye Beach Playland park May 26, 1928. The layout was known for its many tall spiraling drops, hills, bobs and weaves all throughout disorienting layers of track. The cost was under $200,000 to construct. It stood somewhere between 89 and 90’ tall. According to Richard Munch’s book Harry G. Traver: Legends of Terror, the track was somewhere between 3135 and 3560 feet in length. People who remember this coaster, recall it as “looming” and “intimidating”. Having built many ocean pier-based coasters in the earlier 20’s, Church was a master at condensing a nice compact layout in a small parcel of land. The Airplane’s younger and tamer neighbor, the Dragon Coaster (1929 – ) had more of a wide-spread layout that took up about twice as much land.

The relatively unstable grounds on which it was built, added with the intense pressure of the ride’s forces, made the ride high-maintenance and repetitive riding difficult. When Westchester County changed insurance providers in 1957, inspectors of the ride said it would take about $100,000 to bring the Airplane up to current safety standards. That was too much for the county to want to spend on an amusement ride repair, so it was unceremoniously demolished in November of 1957. 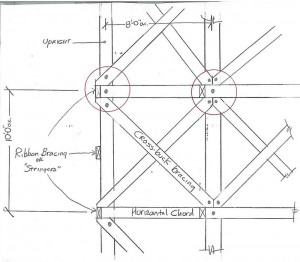 C101: Describe the model making process? Where do you even begin?

Tim: Research!! Research!! Know your coaster like the back of your hand. This will always be an ongoing process even during the build and new discoveries do pop up from time to time. I am a stickler for being as 100% accurate as I can – every post, every cross tie, every detail that can be visibly seen. Number the bents, even if it’s just temporary markers on every photo. Make sketches of how things appear and you’ll find out if you were correct or not later in the process. That makes the job a lot harder, but it’s worth it. In this case, I enlarged every photo I could find and scanned everyone of them with a fine tooth comb. I have an accordion folder that has been enormously helpful in keeping my photos, notes, and drawings all in order.

Choose your scale. Originally I was going to make it 3/16’ = 1’ scale but a colleague of mine in the early days of STCC, recommended I increase that a hair to 1” = 5’ so that the boards would also be to correct scale. This model of the Aeroplane will be 17 and 1/2 “ tall.

Keep a list of tools and supplies that you will need. Some special tools, like templates, will need to be planned out and made with the utmost care.

When it’s time, I begin the layout. After many several attempts to sketch this layout, I was not satisfied with the outcome as there were a few things that I couldn’t get to add up. However, I was fortunate enough to borrow someone’s original layout plan of the ride. After the layout is done, I began drawing the lateral elevations to scale, preferably on a long roll of paper. I think mine ended up being something like 35’ long.
Then I do bent-by-bent drawings to scale, using the lateral elevation drawing as a height reference. Yes, very time consuming. I use the drawings to ‘map’ out the bents and make notes so I refer to it as I build each one.

Make a workshop. Make a list of all the materials that you need to create the model. Then you have to decide on a building process – HOW do you want to build the bents, HOW do you cut these 541 boards all exactly the same size, should I paint now or later? I used a foam-core base to make a measuring area, a cutting and sanding templates, and painting and marking space. Also, a template to make the bents is MOST helpful in the whole building process. 6 bents (double duty) at one time can be made on my template.

C101: Great advice! How do you plan out the model? Do you use a CAD system to make a 3D model first?

Tim: Nope, I eyeball, and I go over and over areas again until I have it spot on. I’m sort of anti-computer for substituting someone’s natural artistic ability whether it’s movies, music, other art. It’s ME designing the coaster, not a computer. There are other reasons besides that.

C101: What are some of the challenges with trying to recreate a ride that doesn’t exist anymore?

Tim: Finding a place that sells tiny little nails and bolts, ha ha. The only references I do have, would be from photos, plans, and believe it or not, those short movies on YouTube have been a big help. Trying to plan areas that cannot be seen in any photo, especially where three or four layers of track all converge into one corner and how the superstructure is designed to accommodate all that. Getting the banking and the exact tracking profile correct has proven to be a good challenge. I’m always going back and making minor corrections to my plans. Trying to figure out how some elements don’t match up with I bring them together is a little frustrating but I love the challenge trying to figure it out.

Also, here is a video I made of the Giant Dipper (Another Fred Church and Frank Prior creation) restoration that gives good up-close shots of the finer points of his construction methods.

C101: Since this is for Coaster101 I have to ask, do you have a favorite roller coaster?

Tim:Yup!! The Voyage at Holiday World! I go there every chance I get.

C101: The Voyage also happens to be my personal favorite! Thanks again to Tim. We can’t wait to see the finished product! Visit Theme Park Review to see the latest progress on the model or like the Bring Back the Airplane Coaster Facebook page.