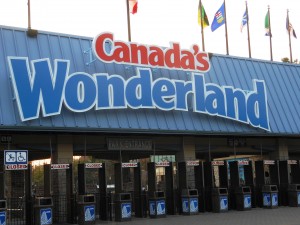 I’m going to write this Canada’s Wonderland review in the same style as Peter King’s Monday Morning Quarterback (MMQB) columns. Let me know if you like this format or not.

Quick note, Wonderland is famous for their outstanding collection of flat rides. I’m not really one for spinning around in tight circles so I am sad to say I did not experience any of their flat rides (plus my time was very limited) therefore I will not be commenting on any of them further. I will say that Sledgehammer looks like an incredible ride, like something you would design and build out of K’nex first. 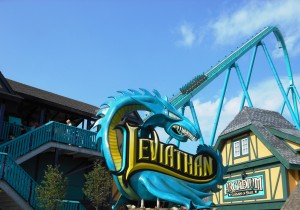 Leviathan is the new 306-foot tall giga coaster at Canada’s Wonderland that debuted earlier this year. The first drop is huge, the speed is maintained throughout, and it’s so comfortable you could ride it over and over. However, the ride is like this summer’s season of Breaking Bad – it ends in the middle and leaves you wanting more. I’m not saying it needs to have another 3000 feet of track but the brake run should be a mid-course brake run. In my eyes, Leviathan is severely lacking at least one climatic addition to the end of the ride such as another airtime hill, helix, or water feature. The lack of a proper finale keeps this ride from being one of the best in the world.

I don’t usually do this but if I had to take one or the other I would prefer Millennium Force to Leviathan due to its setting and completeness. Millennium Force has a climatic “victory lap” ending (and no, I’m not a MF fanboy either).  Leviathan is a great ride but it’s not even the best coaster in its own park.

The crown jewel of Canada’s Wonderland is Behemoth, a 230-foot tall B&M hyper coaster loaded with airtime. The 5318 feet of track is perfectly positioned within the park and offers some thrilling moments as you swoop down low over the ground and water. The speed through the hammerhead turn is tremendous. You can sit in the second row and still have a front row view. And it has a proper ending. Behemoth > Leviathan.

The surprise of the park for me was Vortex, an Arrow suspended coaster built in 1991. It’s actually the exact same ride found at Kings Island known as Top Gun…er…Flight Deck. Yet the ride works so much better and is a more natural fit at Canada’s Wonderland. The lift ascends onto Wonderland Mountain and the twists and turns take you dangerously close to a lake. Kings Island’s ride is in a very odd place in the corner of the park and you have to walk a mile from the entrance to the station. Vortex even had a full queue too. I hope they don’t dismantle this one anytime soon.

Canada’s Wondeland is full of what theme park enthusiasts like to call “charm”. There were numerous green spaces, wooded hills, and meandering creeks. I like charm. I’ll let the pictures speak for themselves. 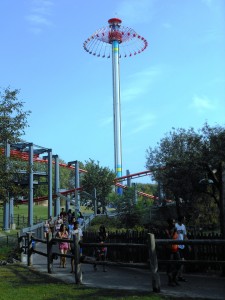 I really liked the fact that there was an employee at the entrance to each station controlling the flow of guests into the station gates area. This helps make loading more efficient. Fast Lane was great for someone like me without a lot of time. Regardless of your thoughts on whether it’s right or wrong, the park has to be making a killing off of this program. There were many more Fast Laners than I thought there would be. One small complaint would be it appears they don’t even pretend to guess how long each line length is as I saw no postings anywhere. You can’t even tell me how long a full queue would take so I can at least estimate it myself?

Flight Deck is a Vekoma suspended looping coaster (SLC) and my gosh is it horrible. One of the worst rides I’ve ever been on.  Seriously.  I’m not a claustrophobic person but as soon as the over the shoulder restraints with the extra padding locked down around my head I wanted to get off that thing. After getting my skull bashed around we sat on the brake run for what seemed like an eternity before this nightmare machine finally released us from it clutches. Why would a park ever settle for one of these when it could have a perfectly engineered B&M invert?

I rode the park’s two big wood coasters, Wild Beast and Minebuster, only because they were included in Fast Lane. They were bad. They were brutal. Not fun at all. Wonderland is in desperate need of some good wood, like a GG, GCI, or RMC.

The longest line I waited in all day was for food. No joke.  Actually, there wasn’t even a line as there was only one group who ordered before me, it just took that LONG. At least all Cedar Fair parks are consistent in that regard. The food was just MEH too.

I saw numerous guests breaking the park’s rules throughout the day without abandon or repercussions.  Besides the typical cell phone videos being taken on coasters, the worst offense was when I witnessed someone throw a handful of pennies into the air while descending Leviathan’s first drop. That was very upsetting to me – you could easily blind someone that way, as was the case on Dragon Challenge at Islands of Adventure.

Besides Behemoth and Leviathan, which I would give five stars, and Vortex and Backlot Stunt Coaster, which I would give four stars, this park could use more high quality attractions. Paramount added so many low capacity, off the shelf models, it’s really a shame that a park this caliber really only has two attractions worth traveling a great distance to ride. The good news is I think Cedar Fair gets it which is why they added two big B&M coasters.

I’ve been fortunate enough to ride three new coasters to have opened this year and here’s how they stack up against one another:

“I’d say if you can afford it, get FastLane. No-wait front row rides on Leviathan more than pay for it.” @jonroost. Thanks for the great advice Jon – you were absolutely correct!

“I was not able to announce my first award last night, but here it is: The best Coaster Website Award for 2012 goes to – @Coaster101.com!” @SimplyCoaster. Wow, thanks! We’ve been working really hard on the site and we’re glad someone is reading it!

Stats That May Interest Only Me

7: Number of new to me coasters I rode at Canada’s Wonderland.

11: Number of new to me coasters I’ve been on this year at four different amusement parks. 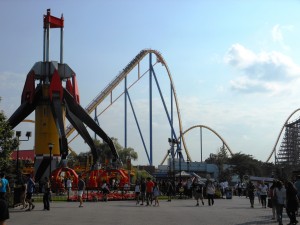