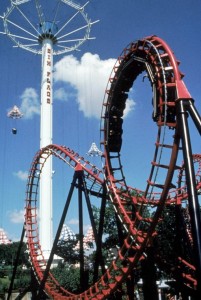 A press release from the park reads:

“Six Flags Over Texas is inviting guests to join in and say farewell to Texas Chute Out and Flashback over the Labor Day weekend.

Texas Chute Out opened at the park in 1976 and was modeled after the old parachute drop at Coney Island. More than 29 million riders have travelled up and down the ride’s 200-foot structure. One of the most popular modes of travel on this ride was the basket, which allowed guests to stand in a basket to take in the picturesque skyline. The baskets were removed in 1994 and replaced with the standard chairs. This iconic attraction has been a long time favorite of guests young and old since its opening.

Its neighboring ride, Flashback, opened in 1989. The boomerang-styled coaster was one of the first built in the United States. The corkscrew spiraled layout flips riders upside down a total of six times—three times forward and three times backwards at speeds up to 50 mph. It has thrilled over 17 million park-goers for more than three decades.

Labor Day weekend, park guests are invited to come out and enjoy these rides one last time and join in for the final farewell on Monday, September 3. For more information on Texas Chute and Flashback, visit sixflags.com/overtexas.”

There is no word on the future of either of these attractions. I think Flashback would be the more likely of the two to be relocated.

Below is the area of the two soon-to-be-removed attractions. I think an X-Flight clone would fit perfectly in that area, but that’s only wishful thinking.

Stay tuned as the Six Flags parks are expected to announce their 2013 plans on August 30.

What do you think Six Flags over Texas will do with the space freed by the removal of Flashback and Texas Chute Out? Will you miss either of these attractions? Share in the comments section below.