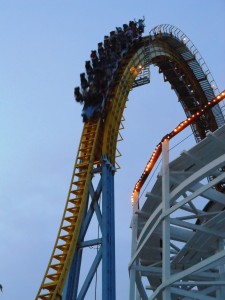 I was selected as one of the 24 Jr. Researchers who participated in Project 2012.  As a result, I was invited to HersheyPark on Friday, May 25th for a sneak preview of Skyrush the night before it was scheduled to open for the general public. Thanks to HersheyPark for putting on such an awesome event!

Shortly after 10pm we were lead up the new path to The Hollow section of the park and the into the ride’s station. I climbed into one of the middle seats in the last row. I have to admit I was a bit concerned about the restraints because I absolutely despise the lapbar component on Intamin’s looping coaster trains (found on Maverick, Fahrenheit among others). When I sat down I was pleasantly surprised to discover the new style lapbars are more akin to a B&M hyper coaster’s clamshell restraint – nice, comfortable, and extremely open!

Before I knew what was happening we were given the all clear and were flown out of the station and up the lift hill. I still can’t get over how fast the lift is – and I hesitate to even call it a lift, it’s that fast! (It’s not quite a launch either so maybe it’s something in-between- a lich!) Check out this video of our train departing the station to see what I mean:

Let me try and think of a few good adjectives to describe the experience of sitting in the last row going over the top of the hill: Whipped? Flung? Hurled? Pitched? Catapulted? All of the above? Either way, it was one of the best moments on a roller coaster I’ve ever had.

The ride flew by in a blur but I’ll try and recount it. Next up are two camelback hills with extreme airtime. The Stengel dive and following turn actually somewhat give you a chance to catch your breath after what you’ve just experienced. Then you’re up for two more extreme airtime moments, a quick turn and the last hop up into the brakes. I arrived in the station completely flummoxed at what had just occurred. Did I just ride one of the best coasters in America? 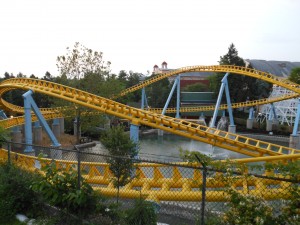 Unfortunately, I only got to ride once and never experienced the ride in one of the unique outer “winged” seats but I can only imagine these would only enhance the ride in the daylight. Overall, I thought Skyrush combined the elements of the best coaster designers in the world- the comfort of a B&M hyper coaster with the extreme ejector airtime of an Intamin mega coaster. I’d say HersheyPark has a real winner on their hands and expect long lines throughout the summer. 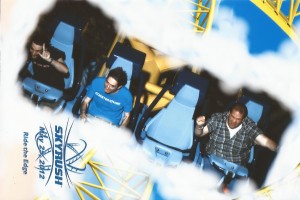 Another interesting observation: there is a road that runs behind the park connected to a small gravel parking lot (where I was able to take some of the pictures). On Saturday evening there were probably about 15 cars parked there and a large group of people just watching the coaster from outside of the park. I had never seen a crowd gather outside a park to watch a coaster like that before!

Visit our Facebook page for more pictures of Skyrush! How does Skyrush stand up to other new for 2012 coasters like Wild Eagle? Find out what I think in my Leviathan review. 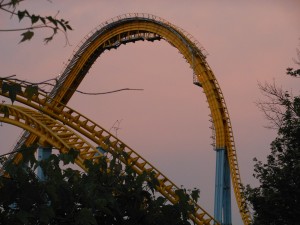