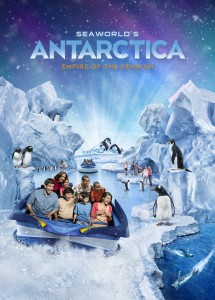 Background for Antarctica – Empire of the Penguin:

Through the years, SeaWorld Orlando has taken guests to far-flung corners of the globe, immersing them in the character and feel of exotic places and introducing them to unique worlds of adventure.

But no journey is bigger — or as incredible — as the one to come in 2013. It’s a voyage to the bottom-of-the-world, to the coldest and windiest continent, to a place of ice more than 9,000-feet thick. It’s a journey to Antarctica and to the empire of the penguin.

Guests will be surrounded by the sights, sounds and awesome encounters found in this frozen place, embarking on a one-of-a-kind ride and an incredible, first-of-its-kind family adventure.

They’ll experience the mystery and wonder of life on the ice through the eyes of a penguin, sensing the beauty and drama of their often-dangerous habitat. Antarctica – Empire of the Penguin combines closer-then-ever animal connections with state-of-the-art interactive ride technologies for adventures that are different each time.

It’s an all-family experience that could only come from SeaWorld and can only be found at SeaWorld Orlando. “Only SeaWorld and its parks can take you on these journeys or bring these experiences to you,” said Terry Prather, SeaWorld Orlando’s president. “We’re excited about what the future holds for our parks and our fans.”

More details can be found at www.SeaWorldOrlando.com.