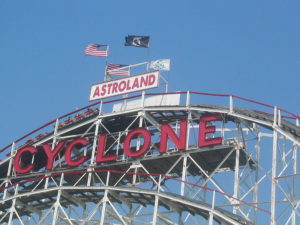 “Amusement Today spoke with Valerio Ferrari, president of CAI, about the work taking place on the grand old ride and why GCII was selected for the project. “We are very excited for the improvements that have been and will be made to The Cyclone. This ride is rich in history, and being able to preserve it for future generations to enjoy is something that CAI is very proud to be part of,” said Ferrari. “CAI chose GCII to renovate the Cyclone mainly for two reasons. First and most importantly, they are an industry leader with a proven track record on renovating existing coasters while maintaining each coasters’ ‘identity’. Second, they demonstrated a very strong desire to put their thumbprint on such a prestigious and iconic ride.”

Small changes will be made to the iconic coaster’s structure in an attempt to make the ride experience more enjoyable. The trains will be either refurbished or replaced. The project will be broken into phases so that downtime is kept to a minimum. The overall project is expected to take between four and five years, although the coaster is expected to open on April 1st, 2012.

If all goes as planned and the weather cooperates, CAI officials feel the Cyclone will be ready to open on Palm Sunday, April 1, 2012.