How do you keep multiple trains on a roller coaster from running into each other?

In order to have the highest throughput possible, most modern roller coasters operate more than one train at a time. In order to run multiple trains on the same track safely and efficiently a sophisticated monitoring and control system is required. This protective system, which prevents any two trains from getting too close to one another, is called a “block system” and is composed of a series of “blocks.” A block is a section of track with a controllable start and stop point. Two trains should never ever occupy the same block at the same time. Failures happen and if a train was to fail and loose a wheel assembly the train behind it needs to be stopped before it has a chance to plow into the back of the unsuspecting riders. 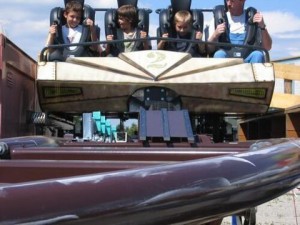 No train is allowed to enter a block until the train which preceded it has safely exited the block. Therefore, each block must contain a method for completely stopping a train and a way to get it moving again. A train can be stopped by mechanical brakes or by disabling the device which moves the vehicle such as a kicker tire or a chain lift. Methods to propel the train from its dead stop can be accomplished by re-starting the chain lift, using drive tire motors, or using good ole gravity by designing the area of track where the train stops at a downward sloping angle.

A roller coaster must have at least one more block than it does trains. A typical coaster might have the following block sections which can stop the train if needed:

The entire blocking system relies on a sophisticated computer or PLC system which monitors the trains and will not allow any two trains to occupy the same block. To do this the computer must know where the trains are at all times. Trains are detected in a variety of ways.

Proximity (proxy) switches are the most popular method used to detect the position of the trains on the coaster’s track. These are electromagnetic devices located at intervals along the track which are programmed to detect the presence of a metal object. The individual cars of the train will have a metal component attached to their underside, often called a flag. Using the proximity switch, the computer can count the number of cars that go by and signal whether the entire train has safely passed through the block depending on the number of flags it counted. This type of system leaves little room for error which is why it is widely used.

Another method used on roller coasters to detect train position is called a photo eye. Photo eye detectors are versatile in the fact that there are several different setup configurations. A single eye can bounce a beam of light off a fixed reflector mounted on the support structure. When the train passes the eye it breaks the beam of light signaling to the computer the location of the train. Instead of using a fixed reflector a pair of photo eyes can be built directly across from each other on either side of the track. A third method is to mount the reflector onto the side of the train so that when it passes it bounces the light back to the photo eye. This method is least popular because a mechanic, carpenter, or film crew could accidentally break the beam and stop the ride by confusing the control system.

Another, less popular, method of detecting a train a mechanical device called a “limit switch” where a moving arm mounted on the track is designed to come into contact with a passing train. This limit switch is spring loaded causing the arm to be pushed forward as a train passes overhead. After the train has passed the switch arm returns to its home position.

Regardless of the type used, almost every roller coaster will use these safety devices in pairs to increase the factor of safety. If one switch fails there is typically another switch mounted in parallel which acts as a backup. Switches are not only used to detect the position of the train, they can also detect the speed or activate scenic elements situated along the track.

To learn more about how coasters are designed check out Coasters 101: An Engineer’s Guide to Roller Coaster Design. 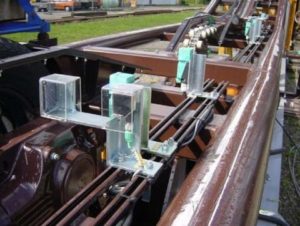