Construction has begun on Steeplechase Plaza, a small area at Coney Island that will feature a historic refurbished carousel: 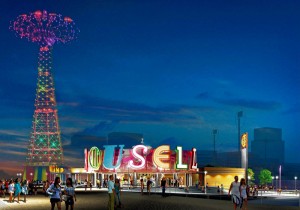 “A historic carousel is set to come home to Coney Island in a new Boardwalk plaza the city will break ground on Thursday.

Construction is starting on Steeplechase Plaza, a 2.2-acre plaza under the iconic Parachute Jump that is now closed off and dormant, which will house the century-old B&B Carousell when it opens by summer 2013.

The ride, the last of Coney’s historic carousels, was set to be dismantled and auctioned off until the city stepped in and bought it for $1.8 million. It’s now being painstakingly restored in an Ohio workshop.

“It’s a gorgeous carousel and it will be a great addition back to the Boardwalk,” said Todd Goings, owner of Carousels and Carvings in Marion, Oh., who is doing the $2 million restoration.

“It’s believed to be one of the last one or two carousel that was carved by Carmel himself,” said Goings, who has been working on the carousel for three years. “It’s a machine that’s well over 100 years old, (and) now that we’ve rebuilt it, with proper maintenance and care, for the next 100 years it will still be there.”

The carousel will be placed in a glass-doored, two-story pavilion – which will allow it to keep running in the winter – on a $29.5 million plaza that visitors can enter by walking under the legs of the landmark Parachute Jump, now off limits to the public. “This new open space…will serve as an important link to Coney Island’s past, and a symbol of its bright future,” city Economic Development Corp. President Seth Pinsky said.

There will also be an exhibition inside the building on the history of the carousel and Coney Island, seating and open space for events, a fountain, and a patch of trees dubbed Luna Forest. “It’s going to be a wonderful little park that opens up to the Boardwalk,” said David Rockwell, founder of the Rockwell Group, which designed the plaza.”