Coaster101 recently had the opportunity to talk with Phil “The Ride Guru” Bloom. Phil has worked on a variety of projects for many different amusement parks around the globe. His vast experience includes working with creative teams at Disney and Universal. We’d like to thank Phil for taking the time to answer our questions about themed ride design!

First off, can you tell us a little bit about yourself? What do you do? What companies have you worked for in the amusement park industry and what were your job responsibilities?

I design themed rides. I have worked as a designer on every type of anything you could find in a theme park including themed rides, roller coasters, theater shows, stunt shows, walk-through attractions, themed facades, interactive games and sports attractions, children’s playgrounds, animal exhibits, as well as restaurants and shops. When I have a choice I will be working on the next great themed dark ride.

Sounds like you’ve done a little bit of everything. Can you tell us a few rides and attractions that you’ve personally worked on?

I began designing rides at Walt Disney Imagineering (WDI) where I worked as a Show Set Designer on The Great Movie Ride, Catastrophe Canyon, Roger Rabbit’s CarToon Spin, Tower of Terror and Indiana Jones and the Temple of the Forbidden Eye. I then left for Universal where I helped create Spider-Man and later went back there to help create the new Harry Potter and the Forbidden Journey. I also helped develop some really great ride ideas for Warner Bros., Paramount, Marvel and others that have yet to go past concept or schematic level design. And, I am currently working on two major attractions that are going to be the next great themed rides in the world, one is under construction and the other is in the late stages of design development.

Very exciting! The list of attractions you’ve been involved with is very impressive and include a number of my personal favorites. How did you get involved in the amusement park industry?

I studied architecture and theater in college. I began my career working in architecture and spending free time designing sets for plays being produced for 99 seat houses. I stumbled into a job on a film as a set designer and began thinking about doing set design for a living. After a few more film jobs I interviewed at and was hired by Imagineering, which seemed to be the perfect place to blend both pursuits of architectural and theatrical design.

You are known as “the ride guru.” How did you achieve this title?

Its just an honorary title, it’s not like the state guru division is handing out plaques.

But mostly I think people call me the Ride Guru because I have developed an uncanny methodology that allows me to quickly create real layouts for any type of existing or new themed ride system.

You once stated that “…themed rides are huge and complex and take a whole team of people to create a great themed ride.” So, what is like working with a team of creative people? What has your typical role been in those teams?

The best thing about working in this business is being part of a dynamic ride team that puts together groups of disciplines, each with a leader that has a defined area of responsibility and additional overlapping areas of influence over the other disciplines.

Show designers, show writers, and producers must work in concert with managers of ride engineering, facility design, special effects, show action equipment, show lighting, audio engineering, show set design, graphics, theme park operations, theme park maintenance, and others to create a ride in which guests can easily load vehicles, safely travel through a series of scenes and then unload – all in an orderly an efficient manner. All of the groups have to push for the most ideal condition for their discipline, and all have to compromise to allow the other aspects of the attraction to work. The audio won’t be perfect, the projections won’t be perfect, the lighting won’t be perfect and the sets won’t be perfect. My job on the team is to orchestrate and balance the compromises of each of these imperfect elements in a way that makes for a really great attraction.

I’ve always wondered, how does a designer work with space constraints when designing a dark ride. Are there any tricks that make riders believe that the ride building is larger than it actually is?

The same tricks that were used by the geniuses at Disney in creating rides like Pirates of the Caribbean and Haunted Mansion are still being used in rides today, such as forced perspectives, mirrors, show lighting and multi-plane scenics. One of the more successful new techniques to perceptively expand space is to blend 3D projection with physical sets, seen in such rides as the Amazing Adventures of Spiderman. 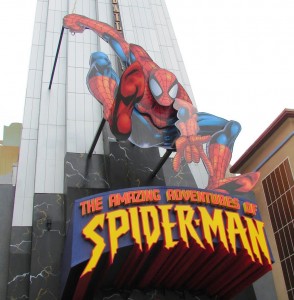 What are the rides you like best and what type of ride would you would most like to work on next?

Although I am known for helping create mega-rides with big budgets, big scopes and large scale scenery and effects, my favorite rides are the old school dark rides like Peter Pan and Mr. Toad’s Wild Ride.

What I would really like to do is create new Fantasy Land type rides. To that end, I partnered with some amazing innovators and we are currently developing a new generation of old-school interactive dark rides……so stay tuned!

Wow, that sounds really exciting and we can’t wait to see some of these amazing sounding attractions come online. Thanks again for taking the time to enlighten us about themed ride design.