Forum member “entropy” recently introduced us to his very fascinating  tool that he has developed for the No Limits coaster simulation game.

As “entropy” himself states, “I’m the creator of a tool called newton2 that allows you to (more or less) create entire tracks in a manner similar to real coaster designers–i.e. using mathematics and physics.”

The tool can be downloaded at Nolimits-Exchange.

A program this complex might seem daunting to your average No Limits user, but “entropy” insists this is not the case. “Now, using math and physics to build tracks sounds hard, but newton makes it (relatively) easy with its graphical interface: 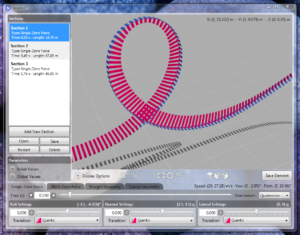 A video can be found below of Freestyle, an Intamin launched coaster designed with newtown2.