Timberliner Trains for The Voyage 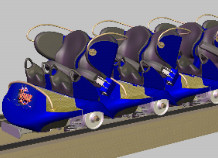 “The #1 Wooden Roller Coaster in the World will feel faster and a lot smoother in 2010, thanks to a new set of trains, engineered by the same team who designed the record-breaking coaster.

“When the engineers at The Gravity Group told us they designed Timberliner trains with The Voyage in mind, they definitely got our attention” says Holiday World & Splashin’ Safari president Will Koch. “The Voyage is extreme and we want to keep it that way season after season. These new trains will help a lot.”

Koch says the Timberliner’s wheels are engineered to steer through curves as they move along the coaster track, creating a smoother ride and less wear and tear on the track. The seats are ergonomically designed for greater comfort, including an exclusive seat-suspension design. The padded seats will also accommodate wider-hipped and longer-legged riders.

“Since the trains will ‘track’ better, riders will experience a much smoother Voyage,” says Koch. “That also means there will be less ‘rolling friction,’ so the ride will quite possibly be even faster when it reopens in May.” The Gravity Group’s engineers tested a prototype Timberliner at Holiday World last spring.

The Voyage is 1.2 miles long and provides a record 24.2 seconds of “air time.” This steel-structure wooden coaster, ranked the #1 Wooden Coaster in the World by Amusement Today for three years running, includes a record five underground tunnels (some are double, creating eight “underground moments”), a series of dramatic drops (including a 66-degree angle of descent on the first drop), three 90-degree banked turns, and multiple track crossovers.

The Voyage’s two new trains, which will each seat 28 riders, will be manufactured in Indianapolis. The Gravity Group is headquartered in Cincinnati.”