Coaster101 is at Six Flags Great Adventure right now watching Kingda Ka make it’s first run in three months. The ride has reopened! Kudos to Six Flags for getting the ride back in operation!

Kingda Ka, ever since the cable broke two years ago, has launched in three parts. The first got the train going a bit, the second kicked in after the first had already let up, and the third kicked in halfway down the launch track to get the train up to speed. It basically sucked. There was no feeling, and on a straightaway where you should be pressed into your seat you were constantly falling forwards and being pushed back again because of how the launch was staggered.

Now with the new launch engine (which we were on the…12th train out I believe!) it all launches at once. It’s one constant increase in speed, though still a bit too weak at the very start to produce the feeling that Dragster does. Regardless, it’s much better than before.

As for that stupid ‘airtime’ hill after the drop, I learned today that it’s only worth it in the front seat. It is SUCH a rush to see yourself barrelling over that thing at 100+ mph.

Unfortunately, Ka is still too rough to beat out Dragster. I don’t know what went wrong — Intamin had all its engineering done for it thanks to Dragster already being a proven design. It must’ve been something in construction (track pieces not being fabricated or constructed precisely enough?), because Ka rides too rough for something that’s going that speed.

LIVE UPDATES FROM THE PARK:

“They fixed it. It launches all at once now, not in three lame parts. And in the front that 8 mph over Dragster makes a lot of difference!” 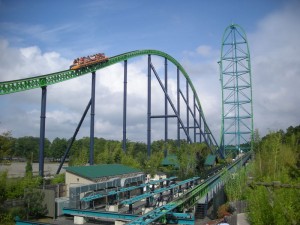