A new blog that’s not about food or drinks!

The amusement park visitor of today is vastly different than the visitor of yesteryear. Visitors, especially the younger generations, are expecting more and more customized entertainment experiences. The days of the passive viewer are over. Today is all about interaction, choices, and personalization. The quickening pace of daily living combined with the advance in personal technology contribute to reshaping what guests are expecting out of today’s amusement parks. There’s also an erosion of patience as people’s tolerance for waiting in lines is decreasing at a rapid rate. Visitors want instant gratification, personalization, and interaction. They want to add their own input to an attraction. “What do I get to do?” To address shifting tastes, the broader amusement park industry will have to rewrite its operating rules.

Disney understands this better than anyone and has already built attractions that use technology to their advance and cater to the needs of today’s amusement park guests. One of these new attractions takes the personal experience to the next level: Kim Possible. 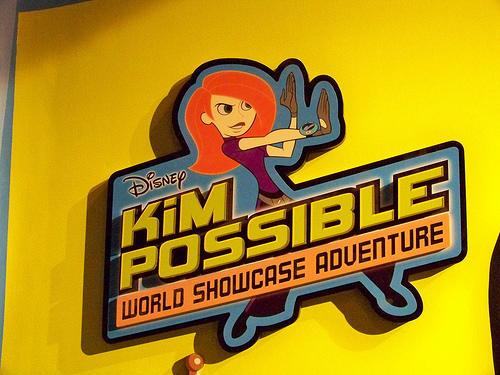 From Wikipedia: “Based on the Disney Channel animated series Kim Possible, the World Showcase Adventure is an interactive attraction taking place in several of the World Showcase pavilions. The attraction is an electronic scavenger hunt that has guests using special “Kimmunicators” (in actuality, stripped-down cellular phones) to help teenage crime-fighters Kim Possible and Ron Stoppable solve a “crime” or disrupt an evil-doers “plans for global domination.” The “Kimmunicator” is able to trigger specific events within the pavilion grounds that provide clues to completing the adventure. Launched in January 2009 and presented by Verizon Wireless, the Adventure is included in park admission.”

1. Sign up as an agent to help Kim Possible.
2. Receive a ticket directing you to a ‘disguised’ cart in one of three countries.
3. Receive the phone device and follow instructions to the mission country.
4. Find and perform several interactions that drive the storyline.
5. Deposit phone in secret location.

The “fake” mobile phone looks like the older LG flip phones and will not work outside of the park. Movie files play when you hit a specific destination and it gives you a task. Then the magic happens. It’s an attraction, no more offsetting than spending time to go on a ride. However, it’s not something you carry around all day and tinker with. There are 7 different missions to do. Because it’s so technical people won’t shy away from it. The big thing is the time involved. It should only take about thirty to forty-five minutes to do, which shouldn’t distract you from your day any more than doing any other attraction. The potential issue is if you go through it with others doing it right ahead of you. Then you run the risk of seeing the clues ahead of time thus spoiling the fun for your hunt.

There are many other new attractions across the Disney parks that also have a new level of interactivity. Turtle Talk with Crush is pretty amazing. It’s been out a couple years now–one in Epcot and one in DCA. It’s basically a puppet, but done with computer animation instead of a real puppet—and completely interactive with kids in the audience, including facial expressions, etc. Even when you know how they do it, you forget.

And if you don’t know how they do it, here is the explanation from Wikipedia:

“Crush’s movements and lip synch is created on the fly and is projected at 60-frames-per-second so that the turtle’s mouth moves in synchronization with the words of a hidden actor portraying the character. The sophistication of the animation enables the projected turtle to move about the screen, seemingly propelling himself with his flippers, doing somersaults, and hovering, in very convincing maneuvers controlled by the actor. This breakthrough technology enables every show to be different than the one before as Crush responds uniquely to each individual audience.”

The Monsters Inc. show in Magic Kingdom uses the same idea, but I’ve heard that the theater is too large for the effect to really work well whereas Epcot’s Crush theater is perfect for this.

Another interactive attraction is Toy Story Mania. There is one in California and another in Florida. Toy Story Mania is very re-ridable because of the Easter eggs. For example, during the Dart Scene you will see two clouds with balloons on them (it takes two people to be effective), but if you clear the balloons on both sides of the clouds at the same time (each person takes a cloud) you will be treated with a rain of 2000 point balloons, where you can then rack up the score nicely. Each round has a different Easter egg.

Also, let’s not forget the Tower of Terror. It’s got an endless set of programs, so like a box of chocolates, you never know what you are going to get!